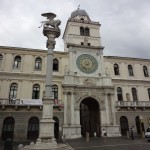 For about the price of a glass of wine, I ride the punctual high-speed train with aria condizionata, electrical plug and WiFi to Padova. Entering what has been earthquake country since 20 May with a 6.0 and a 5.8 on the 29th. Centuries-old buildings are beautiful to behold, but shake them with a major quake and see them fold. I hope my hotel has been retrofitted.

When Italy entered World War I in 1915, Padova was the command center of the Italian Army. King Vittorio Emanuele III lived in Padova during the war. After Italy’s defeat at Caporetto in 1917, the city was in range of Austrian artillery. However the Italian military command did not withdraw. The city was bombed several times. A memorable feat was D’Annunzio’s flight to Vienna from a nearby airfield. In late 1918, the Italian Army won the battle of Vittorio Veneto, Austrian forces collapsed, and an armistice was signed in Padova with Austria-Hungary surrendering to Italy. I think that was the last honorable battle or victory for Italian military for some time. 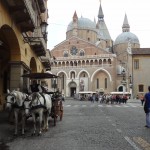 Everything closed for lunch so visit Basilica of Saint Anthony, site of the saint’s remains, all of them I think. Church and Giotto’s frescoes are spectacular and improve my mood. Pilgrims pray at the grave of Saint Anthony.

I return to Scrovegni Chapel for a reservation. I can enter in 10 minutes. One must sit in a room to be acclimated, which is fine with me as it is so damn humid I am beginning to long for Bakersfield. I have given up worrying about my hair and just walk around pretending it is meant to look curly and sticking up – new style called Nuevo Wild Shit. 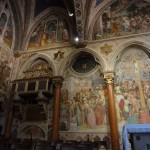 At Scrovegni Chapel, the frescoes painted by Giotto in 1305 are masterpieces and the chapel, with its small rectangular hall and barrel-vaulted ceiling, is elegant and simple, rivaling the Sistine Chapel. However, America’s homophobic right would currently condemn Giotto’s portrayal of The Kiss of Judas. Enrico Scrovegni, whose family fortune was made through banking, commissioned the chapel. In his time charging excess interest when loaning money was considered usury, a grave sin, and many bankers worried they jeopardized their souls. Thus the plethora of chapels and altars, although Dante, who refers to Scrovegni in his Devine Comedy, would argue this would not be enough to enter the gates of Paradisio. The chapel frescos are spectacular. Giotto also is responsible for frescoes in Basilica of Saint Anthony and St. John the Lateran in Rome.

The adjacent City Museum is also good. Lots of pottery shards, stones, endless numbers of religious icons and paintings. I am thinking I may have had enough of Madonna col Bambino and John the Baptist (I know him cause it is usually only his head). The Church of the Eremitani is of the 13th century, containing the tombs of lords of Padova and illustrated frescoes. The Allies in World War II largely destroyed the church, because it was next to Nazi headquarters. Even with improvements in armaments, we continue to be poor shots, i.e. the Chinese Embassy in Belgrade et al. 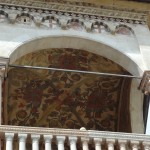 I visit Palazzo Zuckerman displaying more shards and icons. However, it also has a few artifacts of Maximilian and Charlotte before his unfortunate demise in Mexico. Zuckerman was a friend who dedicated a room to Maximilian that includes the sombrero he wore when shot. No blood splatter so who knows. I think my attitude is telling me to forego more museums and churches and relax tomorrow.

Padova is not what I expected. No good first impression; the whole city looks a little seedy. I hear much foreign lingua spoken here, little of it Italian. Many Africans selling sunglasses, umbrellas, and knock-off Louie Vitton on the streets. Lots of what appears to be vagrants hanging about. Very noisy and auto infested. Men with missing teeth speaking to me in the street – but then that’s Italian. Or it could be my foofoo hair.

I retained my Polo shoes, sans most of the polo symbols, so I will challenge the streets and piazzas and forego any more museums and churches. Tonight I dine at Buon Ricordo Restaurante Boccadoro on a wonderful meal of ‘tufted female fowl’ or what I call chicken cooked in wine. Male or female I wouldn’t know, as it is only the thigh and leg. 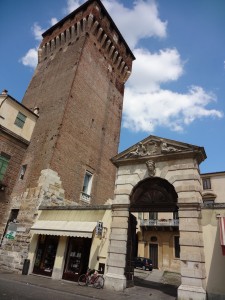 I decide to escape Padova by hopping a train to Vicenza. Italians ask me if this is the correct train so I am not the only one confused by Italian life.

I should like Padova more than I do. I may have been attracted to Padova because of Richard Burton singing about his love (E. Taylor) in 15th century Padua. I should have known better as the story was Shakespeare’s The Taming of the Shrew. I think he should have gone a few miles northwest to Vicenza. Now this is a town to love! As much as Padova is noisy, dirty, busy and crowded – Vicenza is just the opposite. And it has one of the best and largest flea markets I have ever seen. Pedestrian streets, piazzas, beautiful architecture and free Wi-Fi all over town. I even get chips with my beer. 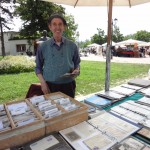 A plethora of collectibles at Vicenza flea market

The Vicenza flea market is huge, at least 300 vendors. Real collectors reside here and I was able to look at some wonderful historical artifacts from pins, weapons, books, furniture and rugs, stamps, postcards, and memorabilia. I even saw my Buon Ricordo plates for 8€. Alas, I will not cheat. One could spend the entire day here. However, I must see the city that Andrea Palladio built.

Vicenza was a prosperous town under Venetian rule, and it’s known for the architecture, much of which still survives. Its appearance, mostly due to the work of sixteenth-century Venetian architect Andrea Palladio, has led to the town’s designation as a UNESCO World Heritage Site. The streets are quiet and mostly empty as I stroll about admiring its buildings. Palladio designed many of the churches, palazzi, and villas and is known for his design of windows. The Cathedral was begun in 1482 and Palladio planned the cupola. Only the original facade survived a bombing in the Second World War. Some buildings are medieval, with several in the Venetian Gothic style, but the majority date from the sixteenth and seventeenth centuries. 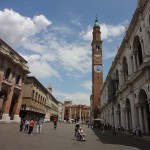 In Vicenza’s historic center lies Piazza dei Signori, especially attractive for the Palladian Basilica, Bissara Tower with the frieze of the Lion of San Marco, and Loggia del Capitanio, also a work of Palladio. The façade of Palazzo del Monte di Pieta is beautiful and incorporates the 1387 Church of St. Vincent. It’s a lively square, actually a rectangle, and a perfect place to sit in one of its cafes and enjoy its beauty.

About one fifth of the country’s gold and jewelry is made in Vicenza, an attraction for the shoppers among us. Another important industry is computer components (Federico Faggin, the microprocessor’s co-inventor was born in Vicenza).

Location services before the iPad

I reluctantly return to Padova only to discover it is a totally different city. A gazillion people are gone and it is pleasant walking around. Even better, it is the Cronache Carraresi Festival, a medieval celebration of history, armies and matrimony of gigantic proportions taking over the piazzas of the city center. 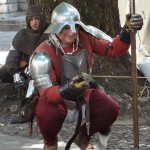 There are jokers, knights, horses, flag bearers, artisans, street performers, and more. And nay a lusty wench of the group – that must be an American need for attention. A fantastic afternoon among the villagers. Totally changed my attitude about Padova.

For dinner and another plate, it is Buon Ricordo Restaurante Antico Brolo. Fish tonight, and a fishy plate. Appropriate end to a busy day. Padova has moved up on my scale of destinations. 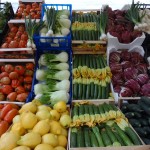 My train leaves at noon, the morning is cool, and so I walk back to the Duomo and Palazzo Della Ragione. The Duomo is as simple inside as the palazzo’s frescoes are stunning. The entire retinue of knights, jokers and wenches of the weekend medieval festival has been replaced with the huge daily market and the hall of the Palazzo Della Ragione is filled with meats, fish, cheeses including gorgeous bufala, and everything else one could wish.

I collect by bags, pay my debts, and hop the FrecciaBianca for the 2-hour ride to Milano Centrale. A bus back to the Airport and final night stay in Casorate Sempione. I have a balcony all to myself, the neighborhood dogs howl at the sirens, it is a sweet rural area, and I can enjoy my beer amid nature, the smell of jasmine, and the birds and crowing roosters. I jet home tomorrow – 34 days, seven countries and 21 Passport stamps richer. What is the point of stamps if the officer hasn’t renewed the ink for months? 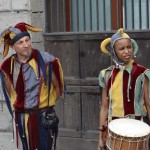 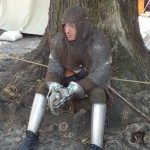