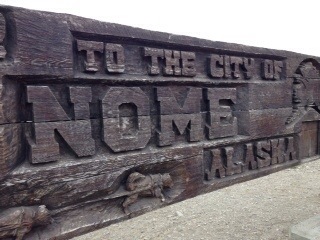 Picked up a button at the Visitor Center that says “I love Nome” and I do. But I get ahead of my story.

Writer’s are taught to answer the five ‘Ws’ – who, what, when, where, why.

Answers are: me, achieving a travel goal, today in Nome. The why is a little more complicated. 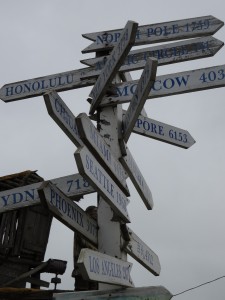 But first, more than you want to know about time zones.

All students learn that planet Earth rotates every 24 hours which is why we have 24 hours in a day resulting in 24 standard time zones. Right? Actually, wrong. Well, the earth does rotate but there are more than 24 time zones. The International Date Line and Daylight Saving Time confuse crossing time zones even more.

Until 1972 all time zones referenced to Greenwich Mean Time (GMT), the mean solar time at longitude 0°. But since 1972 official time services have synchronized to UTC, also called Zulu time, a form of atomic time, although some areas still refer to GMT. Each time zone is 15 degrees of longitude in width and is one hour earlier than the zone immediately to the east. However, some countries have non-standard time zones, usually with a 30-minute offset (others divide into 15 or 45 minute increments). For example, India maintains a time zone of five hours and 30 minutes (UTC+5:30); Nepal Standard Time is UTC +05:45.

Time zone boundaries are irregular mainly because of political factors, determined by how countries’ and states’ borders are positioned. Individual zone boundaries are not straight because they are adjusted for the convenience and desires of local populations. I grew up a Hoosier south of Chicago where our clocks followed the Windy City rather than the rest of Indiana – kept our TV schedules in sync.

In 2010 I traveled across Siberia stopping in 7 of Russia’s 9 time zones. That got me looking at my big map of the world. I discovered I had traveled through 23 of 24 time zones. As a result, I am sitting at the Twin Dragons sipping a Miller’s listening to an old Jo Stafford version of the “Tennessee Waltz” in Nome Alaska.

Sunrise 4:19 AM. Flying above a wide expanse of Alaska covered in snow, I see nothing but mountains and ice fields. More cabin space for cargo then passengers on the one hour flight Anchorage to Nome. 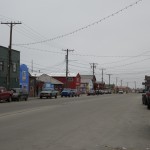 I arrived in a cold Nome where it could be snowing if it tried harder – and it isn’t even a bad day. I planned to walk the short distance to town but a local lady warned that bear and muskox are in the area. Don’t think it’s a problem but at 38° (high of 48° at 6PM), I decided to hitch a ride. Asked a fellow leaving the airport with another passenger (who was born in Arroyo Grande) for a ride in his van. Mitch will be driving a bus of Alaska Chamber of Commerce directors in town for a conference. He dropped me off in town and invited me to join the tour this afternoon. Sounds like a plan.

Nome looks like a western movie set. Many of the wood buildings lining both sides of Front Street date from the early 1900s; a tough mining town of simple architecture. It boomed with the discovery of gold by the “Three Lucky Swedes” in 1898 and is still a busy, semi-prosperous, if rustic, town. I hear a slight howling of winds coming off the bay and feel the chill swirling down Front Street. The Bering Sea is just beyond the huge rocks piled as a breakwater. I can imagine angry storm waves jumping these walls and spray assaulting the street. Is it ever warm here? 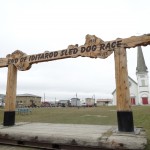 During the morning, I peruse two excellent museums: Bering Land Bridge National Preserve and the McLain local history museum. I learn I am but a few miles east of the International Date Line, Russia is just beyond. In fact, U.S. land is but 38 miles from Russia and on a clear day Sarah can see the mountains of Russia. A walk around town takes me to interesting sites where the Iditarod race ends, miners panned for gold, the Bering Sea meets the beach sands of Nome, Wyatt Earp built a bar and Roald Amundsen had dinner. Then I find a warm spot for lunch. Time is speeding along but no worries as I still have over 12 hours of daylight left. Sunset 1:47AM. 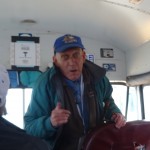 How cool is this? And I’m not talking about the weather. Mitch rolled up in an old yellow school bus as I joined the tour of Nome led by Richard Beneville, a former New York stage actor and man of all trades, full of energy, stories and humor, who almost upstages the scenery he points out. “Hello Central!” (imagine you were a singer/dancer on Broadway for twenty years like Dick and you will be saying it properly.) I am escorted around the harbor and its gold dredgers where I met Steve Pomrenke, co-owner of the Christine Rose and one of the principles on Discovery Channel’s reality television series Bering Sea Gold. The show follows dredgers equipped with various setups to achieve gold mining in a summertime, cold northern latitude, shallow water, ocean environment and is filmed in Nome. All this in Nome? “Hello Central!” 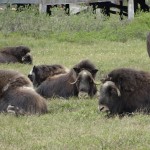 Muskox in the garden

Then we drove to an open field just a block from downtown where about 50 muskox were relaxing and grazing. They did not appear bothered at all by all the attention. Also met Nome’s resident sitting Regional Judge who was also watching the muskox as they were essentially eating his backyard. Next stop was the tundra where Richard named the wild flowers and pointed out incredibly soft tufts of muskox fur caught on bushes. The tundra is beautiful, made up of miniature versions of regular wildflowers. Above and around us was the site of the original Anvil Mine, the mine that started Nome’s gold rush in 1898.

We stopped to talk with a man running a 1930s drill which he lovingly cares for and uses to drill samples of soil, testing for ore content. I had no idea gold was still being panned, drilled, dug and sluiced here. A few tundra swans, Nome prison, the Snake River, and back to town. The people were lots of fun. Mitch, who is a town leader and instrumental in hosting the Iditarod each year, was so kind to have invited me. (We also learned that his father was an Ace of Aces in WW2 with over 40 kills.) Everyone appears to know everyone here in this town of 3500. And I feel I leave knowing them, too.

And there is more. Because of a flight change and because it is Alaska, we fly further north to Kotzebue, an Iñupiat village. The route crosses a variety of tundra and what looks like expansive mud flats and deltas of the Bering Land Bridge National Preserve. The Chukchi Sea and beginnings of the Arctic Ocean is to the north as I cross the Arctic Circle. Most of the passengers deplane in what looks like a sunny (24 hours worth today), prosperous town with lots of beachfront property. Returning to the skies, we turn south for my return to Anchorage.

And this leads me to setting further goals. Having visited Nepal in 2013 and India in 2006, I realize I have a good start on completing some of those irregular time zones, too.