Rarely in the 21st century can I travel in a country before the tourist explosion changes everything. I like Bratislava because it feels ‘eastern European.’ Travelers call it the “new Prague” and this could be true. Under its layer of grime, crumbling facades, Communist apartments and historical city center lies a fascinating, fun and up-and-coming travel destination. Not many Americans come here so book now before the hoards overrun this city as they did Prague.

No problem getting to Bratislava, practically a sister city to Vienna. Leaving Venice riding the ATVO to the airport, I flew Austrian Airlines to Vienna, then out front was the one-hour bus to Bratislava. An easy walk to historic downtown and my room at the Hyde Park Hostel (except for the noisy cafe out back a quite nice room). 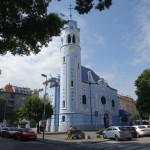 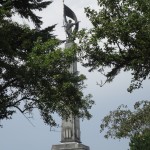 My four days here are filled with activities including museums (City Museum and Old Town Hall are excellent, National Museum with its strange collection of butterflies next to the frontal lobe of Neanderthal and mammoths next to pottery and chairs, the Arms Museum at St. Michael’s Gate); the ubiquitous churches like St. Martin’s, Elizabeth’s Blue Church and the iconic Trinitarian; the dominating Hrad (Castle) Bratislava; the typical Russian architecture of Slavin Memorial honoring the 6800 Russians who died liberating the city from the Nazis; and the expansive views from atop St. Michael’s Gate and the modern Starship Enterprise-like UFO tower.

But the best activity is just wandering the streets, alleys and ‘nàmestie’ or squares. Architecture is a wide range of styles from Art Nouveau to Baroque, communist efficiency to Rococo. Restaurants and street cafés are everywhere, almost as numerous as the ATMs. Streets are pedestrian only and relatively uncrowded, cafés are busy, beer is good. What more could I want? 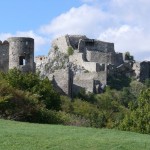 It is pleasant to walk along the Danube. This is a biking city and the paths are busy with those of us enjoying the sun and gentle breezes. Museums are closed on Mondays so it is an ideal day to visit the Botanical Gardens just outside the historic center. And for Tuesday, I hop a bus to Hrad Devín about 7 miles up the Danube. A fortress/castle has existed on this site at the confluence of the Danube and Morava rivers for over 2600 years. It’s strategic location made for a wide range of visitors from the Celts to Napoleon. Slovakia’s patron saints Cyril and Methodius started their mission here in 863. Today, it is quiet and affords magnificent views with cooling breezes. 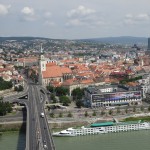 As with most cities, there are drawbacks to Bratislava. The warts can best be seen from the UFO. The communists had a building plan for the city. Unfortunately, it included the UFO (now an income-earning tourist attraction) and the busy 4-6 lane highways that cross through the middle of the historic district. So poorly placed are they, prayers at St. Michaels can barely be heard above the cars passing within ten feet of what would traditionally be its front door. From atop the UFO I see the masses of block apartments built by the Soviets, now called panel houses because of the cities efforts to brighten them with panels of colorful facades. It works. The view also includes the expansive building of skyscrapers to the east, a real game changer for the Bratislava skyline. And below, next to one of the first city parks in Slovakia? A huge shopping center. Bratislava is a shopping city filled with high-end stores and numberless outlets. If Vienna is thought to be the city of culture, Bratislava is the city of outlet stores.

Slovakia has a complicated history between Czech and Slovak interests. It is a crossroads between east and west and sits on the Danube, for centuries somebody’s backyard. With its long history of war and occupation by Napoleon, Hungarians, Austrian Hapsburgs, Germans, and Russians, Slovakia was torn between Hungarian sympathies and western probabilities and doubts lingered as to their individual survival. In 1918 the Slovaks and Czechs realized they were better together than separate. The country of Czechoslovakia lasted 75 years, early on as the only democracy in this part of Europe, and after WW2 existing under the Soviet thumb. Then in 1989 came the Velvet Revolution from communist domination followed in 1993 by the Velvet Divorce when Czechoslovakia amicably split into the Czech Republic and Slovakia – the only countries that achieved independence when the people actually voted against it. Entering the EU in 2004, Slovakia is the first Warsaw Pact country to adopt the Euro in 2009. 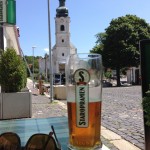 Afternoon thunder showers are welcome and cooling. They also give me reason to sit under a cafe umbrella and sip local beers like Zlaty Bažant (wonderful wheat beer), Kozel, or the Czech Staropramen. Slovak foods are tasty and roasted pork dishes my preference. It is a relatively inexpensive meal, beers can be had for about 2.50$. Internet hotspots are becoming common. English seems to be spoken most places. 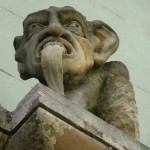 Too much graffiti marks its walls and Bratislava is known as a party town with groups of young men roaming the streets looking for a cheap beer. Not hard to find here. Because of the strategic location of the Danube, many bomb shelters were built in Bratislava during the time of the Cuban Missile Crisis. Today, they serve as surprisingly soundproof music clubs and pubs. Instead of the huge building boom east of town, more monies need to be spent power washing and renovating the crumbling facades of its historic center. And that ugly communist freeway needs to go underground regardless of the cost.

I ride the Varsovia EC train via Czech Republic to Katowice Poland. Second class is clean and comfortable and announcements include English. However, this a language where “Breclav” is pronounced so differently from how it looks that I can’t even figure it. I can place part of the blame on Cyril and Methodius who developed the first alphabet to be used for Slavic languages. From Katowice, I crawl through the Polish countryside to my next destination, a little less comfortable and a whole lot less English. Thank heavens for google maps.