It is with some degree of relief that I am driven northwest to my final hotel of the tour. We will lodge our final four nights in Yerevan, capital city of Armenia since 1918. But first, I overlook two boarders and a mythical mountain. 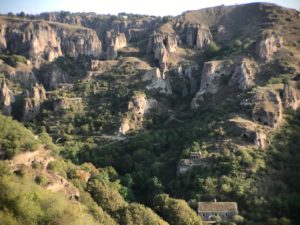 We drive east to the village of Khndzoresk. The Azerbaijan border is just across the gorge to the east. Borders in this direction are closed.

Over 400 cave dwellings are hewn into the soft rock of the steep slopes of Khor Dzor (Deep Gorge). Up to 8,000 villagers once inhabited these cave dwellings beginning sometime in the 12th century. The village is located at over 5100’ above sea level and the artificial cliff caves and the many rock constructions occupy 26 square miles. 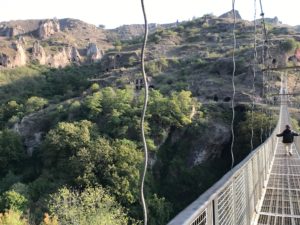 Access is gained down 520 stair steps and across a 500’ cable suspension bridge spanning the deep gorge and stream. Local villagers built the bridge both to ease their own access to their village on the opposite side of the gorge, and for the many tourist who are drawn to this canyon for its unique rock formations and cave settlement.

The chiseled caves, some of which are currently used as stables and warehouses, were inhabited through the 1950s. The grottoes are all sizes: some resemble two or three-room apartments with ovens and niches for storage. In some I see the clay ovens used for baking bread and cooking dinner. These ovens were also good sources of heat for the caves, which are open to the elements. I can imagine animal hides hanging across their entries as a further source of privacy and heat retention.

In the bottom of the gorge sits St. Hripsime church, dated back to the 17th century. This is a pleasant, quiet walk disturbed by little but the birds and a small spring of mountain water. The pointed rock formations are especially interesting, carved by centuries of wind and water erosion. Some of the cave dwellings are quite large and easily accessible. However, there are others far up the sides of the cliff where access makes the cave bungalow much more private and with fantastic views of the gorge and surrounding cliffs.

Above, on the right side of the gorge is Anapat Hermitage containing the tomb of Mkhitar Sparapet, an 18th century Armenian hero in the struggle against the Ottoman Empire. Khndzoresk Fortress served as his military base in 1728. 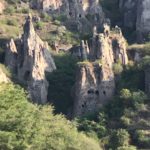 Today, no one lives in the caves but the ancestors of the original cave dwellers have not moved far in the centuries since the caves were carved. Over 2,200 people still make this settlement their home, most of whom are either employed in agriculture or raising livestock. DNA testing shows that these residents and my own ancestors shared a common relative around the time of the Early Bronze Age, some 4000 years ago. Villagers have tested for Haplogroup R1b – Western European branch and our DNA markers match. At some time in the last centuries, my own Haplogroup formed another branch of the genealogical tree as they continued their migration north and west into Central Europe.

A tiring 520-step climb takes me out of the Khndzoresk Gorge and into a region of towering canyons and massive boulders. Water continues to carve the gorge as it rushes down the mountain. It reminds me of a Kern Canyon on steroids. We quickly pass the cave and site where the oldest shoe in history was found. Along the road are a plethora of stands selling fruits, honey, and vegetables. I am told the Coke bottles really hold wine. Because Iranians are not to take alcohol across the border, they camouflage the illicit liquor using Coka Cola bottles. 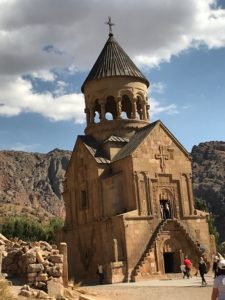 Ninety miles, and three hours of torturous winding and rocky roads later, we arrive at Noravank Monastery or “New Monastery” and, like the other churches, its affiliation is Armenian Apostolic. The complex consists of three churches that have stood here since 1205. The monastery sits above a narrow gorge carved out over the eons by the Amaghu River The sheer, brick-red cliffs make a dramatic backdrop. The surrounding mountains and cliffs, brilliant blue sky, and beautifully sculpted stone churches are a picture postcard of why monks and pilgrims alike would come to this spot for a visit – or for life.

The façade of Surb Astvatsatsin (Holy Mother of God) church is a series of carved lintels, pseudo columns and bas-relief. Its columned tower and tarnished copper pointed dome are pleasingly aesthetic.  Access to the second floor is by way of an extremely narrow stone staircase jutting out from the face of building. And if the staircase isn’t dangerous enough, there are scores of visitors taking selfies. I believe most pay little attention to the beautiful columned dome. Looking up through the lower windows, I can see brilliant blue sky and a heavy chain from which hangs a large bell. 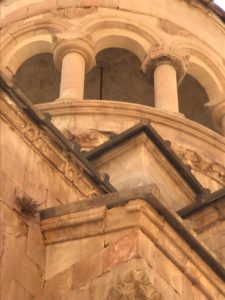 St. John the Baptist, Surb Karapet, is a larger edifice of mixed stone blocks in wonderful hues of rust and ochre that are in harmony with the red cliffs. It is the largest of the churches and has an enclosed central dome. Entrances are sculpted with bas-reliefs. The carved wooden doors are superb. Interior walls are massive stone blocks with the usual heavy iron chandelier hanging from the dome. The entire impression upon entry is one of massive strength and permanence.

Saint Grigor, Surb Grigor, is a modest side chapel added to Surb Karapet in 1275. Its simple ornamentation is done with a natural red pigment. The chapel contains some Orbelian noble family tombs, including a carved lion/human tombstone from 1300. Here and around the complex are several surviving khachkars, stone stele carved with ornate cross and lacy motifs. 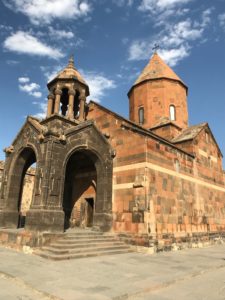 But possibly the real treat of the day is our final stop at Monastery of Khor Virap – not because it is particularly unique with its fortress- like walled courtyard nor that it is surrounded with spectacular scenery. Khor Virap, or “Deep Dungeon,” is a pilgrimage site because Gregory the Illuminator was inprisoned here for 13 years. Saint Gregory eventually became the king’s mentor and together they led the movement to Christianize Armenia. (Armenia claims to be the first country in the world to be declared a Christian nation in 301 AD.)

A white limestone chapel was initially built in 642 and situated over the pit where Gregory was incarcerated. Over the centuries, it was repeatedly rebuilt. The present St. Gevorg Chapel is a small basilica with a semicircular apse. 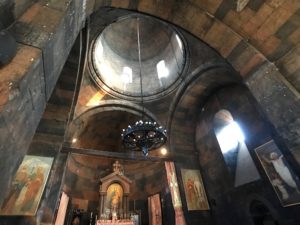 In 1662, a larger chapel, St. Astvatsatsin (Holy Mother of God) was built over the ruins and is one of the most venerated pilgrimage sites in Armenia. Its design is typical Armenian architecture of stone blocks of golden ochre and black. The interior and dome are massive but the overall effect is strength and tranquility.

Of the two pits inside the chapel, Grigor’s is the farther one, about 20X14 feet. The pit is seen through two unmarked holes. A small chamber, winding stairway, and a steep descending ladder lead to a small enclosure in the pit, which was Grigor’s prison cell. The climb down this well is to a depth of 200’ and via a narrow ladder. I.ll pass.

The monastery and surrounding vineyards are nice but the real “star” of this monastery is the mountain just a few miles to the west. There soars the snow-capped but dormant volcano of Ağrı Dağı. Westerners know it as Mount Ararat

From where I stand the western border with Turkey is but 5 miles across a flat agricultural plateau. But in reality, this space is a “no man’s” land that only specially permitted farmers are allowed to access. The pseudo border is just below the walls of the monastery and signified with small posts, a narrow dirt road, and spaced guard posts. It is Armenia below us, and once as far as the eye can see, but Armenia no more. A sore point for every Armenian alive. 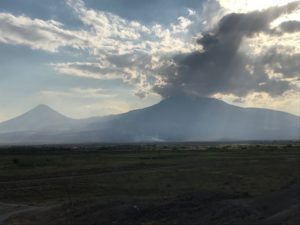 Greater Ararat, the highest peak in Turkey, reaches 16,854′ into the blue sky while Little Ararat (Mount Sis or Lesser Ararat) reaches an elevation of 12,782 ft. Both are covered in haze today, dark clouds drifting over the peaks, unlike our view of the snowy peak days ago. Both peaks are major volcanic cones but have not erupted since 1840. On Ararat’s north face is one of the only true glaciers left on its summit. The bass of Ararat is a massive 22 miles wide. The entire scene is a flat, unmarked plain between Armenia and Ararat.

It is generally agreed that the “mountains of Ararat” mentioned in the Book of Genesis is not referring to this mountain. However, it is also widely accepted in Christianity that Ararat is the resting place for Noah’s Ark. As a national symbol of Armenia, Ararat is considered a sacred mountain and is part of Armenia’s coat of arms. Sadly, thanks to Russia, it is no longer part of Armenia.

Armenia’s capital city Yerevan will serve as our final hotel base. Our home is the Marriott overlooking Republic Square, site of Armenia’s Velvet Revolution. Here, Armenians staged a series of anti-government protests for basic socioeconomic rights – and won.

Serzh Sargsyan planned to follow his two terms as president by winning the election as the country’s prime minister. He had been in power for a decade, and recent constitutional changes increased the authority of the premier’s job, giving him a path to retain office and influence while still observing term limits. His decision and play for power did not work. From 13 April through 3 May 2018, Armenians took to the streets, and Republic Square.

Things did not go smoothly for Sargsyan and his Republican Party. On 23 April, Sargsyan caved, saying “I was wrong, while Nikol Pashinyan was right” and Sargsyan resigned. The opposition candidate, Nikol Pashinyan, who had been briefly jailed, was released and immediately went to Republic Square to further harness the energy of the Armenian people. Thousands filled the Square.

On May 8 Parliament again had a vote on a new Prime Minister, and Nikol Pashinyan was the only candidate. He won enough votes, with the help of a few realistic Republican Party members who realized their cause was lost. Without a shot fired, Armenia had stood up to their government, demanded their rights, and got the candidate of their choice. Nikol Pashinyan was their new Prime Minister and Republic Square has a new place in the hearts of Armenians. Pashinyan declared it a “Velvet Revolution.”

This year, Yerevan is celebrating its 2800 anniversary and Republic Square is preparing for festivities. We are in a massive building surrounded by embassies and museums; state ministries; government parking lots; and restaurants called Diamond Pizza and Beijing. Thankfully, I think the closest Starbucks is in Lebanon.