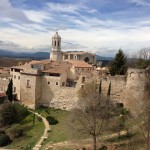 Girona is an easy drive north from Barcelona and an “elder person’s” respite from the big city, noise, crowds. For youth, not so much. An ancient city where Romans built a citadel in the 1st century BC, the Visigoths ruled until conquered by the Moors in 715. In 785 Charlemagne conquered the region only to loose it back to the Moors 8 years later. Girona bounced back and forth until the Moors were driven out for a final time in 1015. Wilfred the Hairy hung out in Girona before Alfonso I of Aragón declared it a city in the 11th century. Sounds like a good place to visit for a couple days. END_OF_DOCUMENT_TOKEN_TO_BE_REPLACED
By Pat, 7 yearsMarch 30, 2016 ago