Girona is an easy drive north from Barcelona and an “elder person’s” respite from the big city, noise, crowds. For youth, not so much. An ancient city where Romans built a citadel in the 1st century BC, the Visigoths ruled until conquered by the Moors in 715. In 785 Charlemagne conquered the region only to loose it back to the Moors 8 years later. Girona bounced back and forth until the Moors were driven out for a final time in 1015. Wilfred the Hairy hung out in Girona before Alfonso I of Aragón declared it a city in the 11th century. Sounds like a good place to visit for a couple days.

Driving into Girona, we could see snow atop the peaks of the Pyrenees around Andorra. We easily GPS our way to Hotel Europa. It is the parking that causes me pause. I have practice with my one car garage and inclined driveway, both of which are babies’ play. Here, my driving is challenged. Sharp turn into what looks like a furniture store lobby, little swing left and quickly right to avoid the cement wall and down a steep ramp to a door. Up goes the door and zip goes the car into its parking space with at least 2″ to spare on each side. With mirrors tucked in, no problem. And beside me, I notice with horror, someone has fit a second car! I will have nightmares thinking how I will reverse this process. Only things giving me confidence are I see few cars scraped or mirrors missing, and I splurged for the insurance.

What to do in Girona?

Girona has undergone twenty-five sieges and been captured seven times. It was besieged by the French royal armies throughout the middle and late 1600’s. In May 1809, it was besieged by 35,000 Nepoleonic troops and finally conquered by the French after 7 months of siege. All in all, Girona has faced quite a history and remnants exist about the city.

The old fortifications have protected Girona from invaders for hundreds of years. The city wall was an important 1st century BC military construction built in Roman times. It was thoroughly rebuilt under the reign of Peter III the Ceremonious in the second half of the 14th century using the Roman wall as a base. The defensive walls were demolished at the end of the 19th century to allow for city expansion but missing parts have been reconstructed and the Passeig de la Muralla now forms a circuitous route around the old city. We wall walk for over a mile, enjoying the views of Girona’s tile roofs and bell towers and vistas of the mountains in the distance. The city below is quiet except for church bells tolling the quarter hour.

I mention the above leaders, unknown to all but the most knowledgable Spaniards and those who read Wikipedia, because I love their names: Wilfred the Hairy, Peter the Ceremonious. Gotta love this colorful part of history. 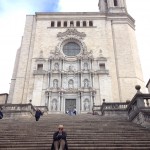 An ancient cathedral, which stood on the site of the present Girona Cathedral, was used by the Moors as a mosque until after their final expulsion when the stone edifice was entirely rebuilt. The cathedral towers over the city and is an example of Catalan Gothic architecture and approached by eighty-six steps. However, descending the wall behind the giant cathedral, we escape having to make the climb. It is as huge inside as out with aisle and chapels surrounding the choir, which opens by three arches into the nave. The church boasts of a 72′ pointed stone vault as the widest in Christendom. Among its interior decorations is a unique hammered silver canopy above the altar.

Just down those 86 steps and around the corner is the Church of Sant Feliu. Its style is 14th-century Gothic, the façade dating from the 18th century, and it is one of the few Spanish churches which possesses a genuine spire. It contains, besides the sepulchre of its patron and the tomb of the valiant Álvarez, a chapel dedicated to St. Narcissus, who according to tradition was one of its early bishops. The church’s square pillars and barrel roof are stunning, but it is the side chapel of Saint Narcisse, rich marble, high vaulted roof, carved wood ceiling with frescos above the altar that should not be missed. I also note how cold it is and the use of propane heaters to keep the worshippers from freezing during mass.

Strolling the small areas of the old city is a best use of time. The Plaça de la Independència, which commemorates the War of Spanish Independence against Napoleon, is one of the best plazas in Girona. The 19th-century style arcaded square is surrounded by austere, identical neoclassical buildings with balconies dedicated to the defenders of the city of Girona during the sieges of 1808 and 1809. In fact, Catalonia flags fly from many windows and balconies. This was something noted in Barcelona, but very prevalent in Girona. The Province of Catalonia has long sought their independence from Spain.

The other item of political note is the prevalence of monuments and statues commemorating the War of Independence from France/Napoleon. I have seen little mention of the Spanish Civil War or its victims, and no mention of General Franco (except in a political cartoon with Hitler and unfortunately mentioning Trump, who could be a bosom buddy of both.)

Although most traces of Girona’s Jewish history, like most in Spain, were wiped out when the Jews were expelled from Spain (actually they kinda sorta had a choice – leave, convert to Catholicism, or face Isabel’s Inquisition), a few did remain. Around the narrow streets of The Call, one may see traces of their prior existence and visit the Catalan Jewish Museum. 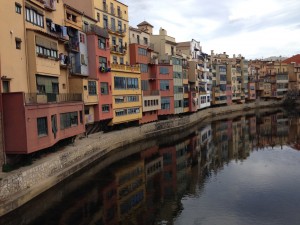 Colorful houses along the River Oynar

Characteristic of Girona are the picturesque Cases de l’Onyar – the colorful houses hugging the banks overlooking River Onyar. These were built over many years and give the feel of a small Mediterranean city. The façades are painted according to a specific color palette created by artists and architects. It’s pleasant walking along the river, filled with ducks and gulls, crossing and recrossing the river via city bridges, including Pont de Sant Agusti or the red steel framed Eiffel Bridge. Houses reflecting in the water, ducks discussing the beautiful weather, gulls searching their next meal, all make for a tranquil afternoon.

The more modern sections of the city lie on the plains to the west of the river, while east of the Oynar are the narrow, old streets of the city. Perfect for strolling, looking for a cafe for dinner, a gelato for desert. My biggest decision is cervaza or sangria. That decision made, we relax in what is a nearly deserted village.

After dinner, I walk cobblestone streets, alone, cathedral facades lit, quiet except for occasional tower bells tolling the quarter hour, archways leading to deserted plazas. Here a small restaurant with a few diners, there a busy bar where patrons chatter over a cerveza or glass of sangria. Shuttered and dark windows, everyone out of town or resting from a long weekend? A lone shop selling Nutella crepes so expertly made – delicious.