Bright, sunny, freezing cold, an occasional falling dagger disguised as an icicle. Ice crystals sparkling on the snow. It may be spring for Siberian locals but butt-freezing to this California girl.

As our train approaches Khabarovsk we see rolling hills, lots of rivers, and small villages of wooden houses. Most industry I see is logging and everywhere there are truck tracks over the ice and snow. The basic wooden house has not changed across nearly 4000 miles. Russian architecture remains a natural log house of various size but none too large, with carved windows, some painted with blue or green. There is no water in most of these structures and always a huge pile of firewood outside. I do not see farm animals but there are usually several smaller buildings or lean-tos in what is always a fenced compound. I call these Tevya villages because they remind me of the villages in Fiddler on The Roof.

Wine – a good time to say a few words about their Russian wine. In restaurants, the menu listed Kendall Jackson and French wines. But our guide Nadja recommended Fanagoria. We bought the white version. It comes in a bottle or for traveler’s convenience a container like one would buy a pint of milk with a wonderful screw cap. It cost 113 rps or about $4 and is sold exclusively in grocery stores. How great is that for a fair tasting wine?

As we approach the 7000 km mark we are but 30 miles north of China’s border on the Amur River (the 9th longest river in the world). At Amazar we officially left Siberia and entered Russia’s Far East (for the longest time my ears were hearing forest). The land is even more rugged with no visible roads but many car tracks over the rivers. The train used to require cars with foreigners to pull the blinds though can’t imagine what there was to spy out here.

Arrived on time to the large (600K) and modern city of Khabarovsk. Our host, Elena, whisked us around the three hills of the city. About 28F degrees and the wind along the Amur is cold.

Khabarovsk has the ever-present Karla Marxa and Lenina streets to walk. Also a promenade and park along the Amur. Many ice fishermen on the Amur are getting in their last days of fishing before the ice begins to break up. Hard for me to imagine. We visited the new church in Komsomol Sq. and the Regional History Museum which has excellent cultural exhibits of local animal and peoples. Then toured the informative Military Museum.

Elena warmed a glass of homemade honey beer (ме доыуха) for us this evening. Sort of a mulled wine made of beer. It is low in alcohol, tasty and I think it could be felt if drunk enough.

This morning we climbed South Hill to the Church of Transfiguration. Just below it, is wonderful memorial for the Great Patriotic War 1941-1945. It has 20 massive “pages” and a semi circle of wall some 15 ft high listing names of men who lost their lives fighting for their motherland. In the center is the eternal flame. It is on a hill overlooking the Amur. There is another small memorial to soldiers who died in Afghanistan and other zones. Nearby is a column and display of memorials and award medallions. Very impressive.

Like most churches we see, Church of Transfiguration is new or rebuilt as so many were destroyed or left to rot during the Communist era. Most Orthodox churches are simple and clean with numerous icons.

The rest of our time in Khabarovsk was spent at the City Market featuring everything in triplicate from fishing to plumbing supplies, foodstuffs and half the cow, to clothes and shoes. Located so close to the Chinese border, many Chinese commute here to sell their wares alongside the locals. Lots of photo opps.

Khabarovsk seems to be the cosmopolitan city of the Far East, modern with top stores and cafes, clean, socially active, and beautiful. I like the city a lot. Soon the cafes will have wifi along with the expensive pastries.

We catch our final train at 8:30 pm and will awake in our southernmost stop of Vladivostok, surrounded by Chinese, Koreans, and Japanese just across the Sea of Japan, and of course the ever-interesting Russian. Our #6 train is fresh from the station and we share our bouquet of flowers and neat cabin with Paris Hilton who speaks good English and Charles Bronsky who speaks some. 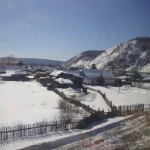 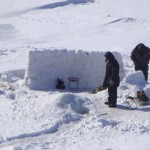 Ice fishermen on the Amur River 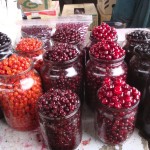 Selection of berries at Central Market 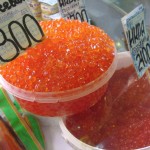 Caviar by the bucket 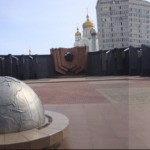 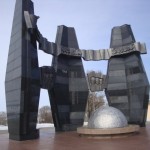 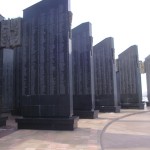 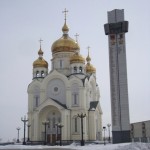 Church of Transfiguration and Soviet column of honors