Looks cold and probably averaging 20 degrees with 3 feet of pristine snow as we pass thru the undulating hills of the Urals on our way to Shadrinsk. We are about 940 km out of Moscow (all time and distance is in comparison to Moscow) and it is sunny with blue sky. People are walking to work as we pass thru villages. The air is clear and I note no pollution. Many little houses of greens, blues, and yellows and many local dachas. We are learning what the locals mean when they say “Moscow is not Russia.”

Our car attendant has hot water, maintains a clean bathroom with paper, and comes to tidy the car and shake the rug. Our stops at the stations are from one minute to 25. And the train is very punctual! The train is full,  quiet, but too warm. People keep their doors closed. We realize our second-class cabin is quite nice compared to the other two “hard seating” cars where it is open sleeping with no privacy yet still quiet. We had a delicious bowl of borscht and boiled potatoes with a beer for about $21 for two. We were the only ones in the car, which was all in red leather including the bar, more suitable for a disco than a TransSib.

Sasha and Nadja, our hosts in Shadrinsk

Sasha and Nadja met us at the train for a pre-dawn arrival into Shadrinsk, which is now off the main TransSiberian route. It is over 60k people and suffering a cold and snowy winter, 6 ft of snow and most still on the ground. Roads are snow-covered and sleighs would be most useful.

We visited a local museum and then the 15th century Dalmattovsky Monastery. Monk Sergei told about the destruction of the churches under Communism and the attempts to rebuild them since the mid-1990s. Women must wear skirts so we were lucky to get in as our pants did not meet this requirement. The monks are currently rebuilding the church roof.

Driving thru the countryside was great – huge open expanses of snow and forests of birch. I spotted an elk. Also a police stop to remind Sasha to turn on his lights but no exchange of money. The houses and dachas are traditional with the important blue to ward off evil spirits. Many of these houses are empty and in disrepair. I suppose they will be gone soon as owners have died or the community may not know of an owner. Typical homes are built with a stone bottom floor for the shops and wood on top where the family lived. The heating is gas and centrally controlled so no way to turn down or up. In freezing temperatures, I open windows to cool rooms. The above-ground pipes thru town transfer the  utilities. We end our day in the banya of our hosts. The heat and beat (with birch branches) feels wonderful.

This morning we drove to the Cemetery of German Women. A sad mass grave of 2000 women sent here in 1945 and who died at the forest camp. Hildegard Rauschenbach wrote a book on the subject and Nadja and Sasha have translated it into Russian.

We had a wonderful time stomping thru deep snow to three different mineral springs. There are paths but the snow is still deep. All springs tasted different. This is a area known for its mineral springs and people come from all over to fill bottles with the water. Also to be observed were many ice fishermen; the Red Star collective, once the largest farm for pigs; large modern homes representative of the “new Russia” that could pass for any American town.

Nadja and Sasha were so kind. Nadja gave us knitted booties; Sasha made a cd of Russian domra music and copied his pictures to my chip. He even mended my coat as those who check it expect to use the little thingy at its neck to hang it up. He said my $15 cashmere wool coat I bought at a resale shop  was very good and handmade. But I still intend to leave it in Siberia. No need for a heavy coat in Cambria. Once again, I leave my hosts with more than I bring. 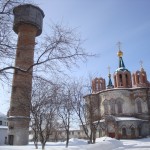 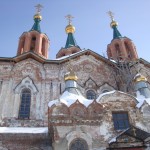 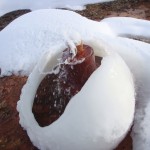 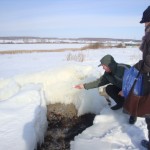 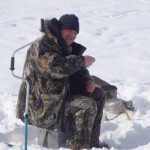 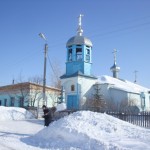 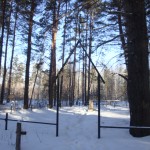 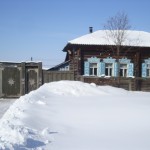 Blue shutters to ward off evil 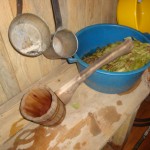 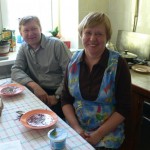 Sasha and Nadja our hosts 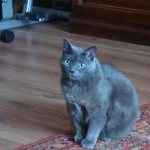