It is back to Africa for me. I fell in love with South Africa and its people during my travels in 2006. Fascinated by Africa’s history, intrigued by its politics, and yet horrified by its disease, poverty, and politics, I am eager to return to the continent. This time my friends and I travel North and West Africa for a glimpse into a part of the world I barely know. Many of the countries I will travel have acquired new names since I attended school during Africa’s “colonial” period.

In preparation, I have been reading as much as possible. I have to admit that it is a challenge to understand and remember all of what I am reading. When in school, little is taught about this part of our world. And probably even less of what I was told was accurate. It is only through reading that I begin to get a grasp on the realities of the continent. By visiting and walking its soil and meeting its people, I hope to get a truer picture. 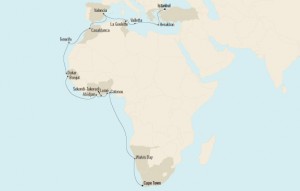 Little driving and independent travel on this trip. My friends, Jim and Phoebe, and my sister Judy are traveling on the Oceania Nautica. Not exactly roughing it but at least we are taking independent, private tours with locals as much as possible. Choosing to see the historical sights and eliminating the “tourist shopping.” Unless a traveler goes to Africa and walks the paths, one cannot know how Africa works, how Africans live and think. It is hard to achieve this during a day stop in a port. However, I am hoping that through my reading, questions, and observations, I will come away with a better concept and understanding. And equally as important, leave those I meet with a good impression of America.

I will be posting my port blogs via iTouch as I travel and adding pictures and further information once I return. Once again we are off, leaving Pasha, Teak and Dior in the capable hands of Uncle Dean.

For a list of books to assist in understanding the history and present culture of Africa:

o John Reader’s Africa: A Biography of the Continent is an excellent description of the origin and survival of mankind.

o Christopher Hibbert’s Africa Explored: Europeans in the Dark Continent, 1769-1889 will leave you in awe that any European survived the exploration of this continent. Gives you a whole new outlook on Stanley and his fellow explorers.

o Thomas Packenham’s Scramble for Africa is a good telling of how Europe took over Africa and pretty much set the stage for many of the problems that continue to plague the continent.

o Adam Hochschild’s King Leopold’s Ghost will continue where Packenham left off – in more ugly detail than one can imagine. It is a lesson for all about the possibilities of greed and lack of respect for other’s human rights.

o Martin Meredith’s The State of Africa depicts the political power struggles post-colonial times and will leave you wondering if there is any hope for Africa.

o Naomi Klein’s Shock Doctrine will hopefully give you pause to consider the effects of U.S. economic policies not only on Africa but other people of the world, including yourself.

o Richard Dowden’s Africa: Altered States, Ordinary Miracles will restore your hope in Africa and create a desire to see for yourself.