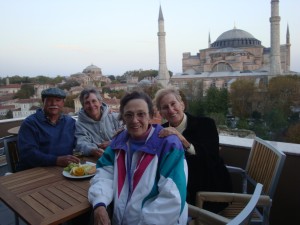 From our terrace at And Hotel.

I celebrated my birthday in Constantinople. When I visited in 1981, the population was 2.7 million, about half of whom were carpet salesmen. A lot has changed since then.

Istanbul, historically known as Constantinople, is the 5th largest city proper in the world with a population of 12.8 million. There still are thousands of carpet salesmen, but distributed among them is a vibrant collection of perhaps the nicest, most helpful people I have ever met, and the nicest bunch of cats in the world.

Located at the mouth of the Bosphorus, Constantinople encompasses the natural harbor known as the Golden Horn and extends both into Europe and Asia – the world’s only city straddling two continents.

The father of modern Turkey is Mustafa Kemel “Pasha” Ataturk. Today, 10 Nov, is not only my birthday but the anniversary of his death in 1938. All flags are lowered by half in his honor. I must remember to tell my cat, Pasha, as he is named after this revered leader of Turkey.

When Constantine became the emperor of the whole of the Roman Empire, he laid out the plans for a new, Christian city called New Rome, but most called it Constantinople, once the largest and wealthiest city in the western world.

The establishment of Constantinople served as one of Constantine’s most lasting accomplishments, shifting Roman power eastward and becoming a center of Greek culture and Christianity. Numerous churches were built across the city, including the Ayasofya (Haghia Sophia), which remained the world’s largest basilica for a thousand years. Today, it is a museum.

In 1453, after an eight-week siege (during which the last Roman Emperor, Constantine XI, was killed), Sultan Mehmed II captured Constantinople and declared it the new capital of the Ottoman Empire. Hours later, the sultan rode to Ayasofya, summoned an Imam to proclaim the Islamic creed, and converted the basilica into an imperial mosque.

Although the largest religious group in Istanbul is Muslim, the city and country is proud of its reputation as a secular democracy. Its citizens rightfully show great pride in what has to be one of the best cities in the world and is the European Cultural Capital for 2010.

Our days were filled with magnificent sights. Sultanahmet (Blue Mosque) is a stunning example of architecture and colorful Iznik tiles and distinctive blue colors. In the nearby Hippodrome stands a 1500BC obelisk from Luxor and a fountain gifted to the sultan by Kaiser Wilhelm II.

Ayasofya is huge and during our visit filled with the excited greetings of school children. “Obama cat” who is the official greeter met us. He was there for a Presidential pat when Obama visited. Ayasofya is the third church built on this site in 537 by Justinian From the gallery I can view both the Muslim and Christian frescos and mosaics. The center dome is supposed to be the ancient world’s largest. The church turned mosque now museum is impressive in its size, simplicity, and history. We also toured the mausoleums of the sultans, including Sultan Mehmed II, wives and children. Many smaller caskets indicate short lives, boys with white Dervish turbans atop, girls sometimes quite separate.

We strolled the gardens around Palace and visited the Treasury, Sacred Relics, Chamber of the Mantle of the Prophet, and other rooms. Then we walked about the Byzantine Cisterns – lots of pillars, a little water and many big carp but not a fishing pole in sight. 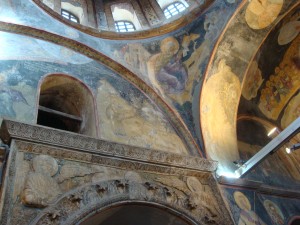 A magnificent 11th century church is St Saviour in Chora, its frescos and mosaics covered over by the Muslims in 1450s. It was restored to its glory in the 1860s by a local businessman. The mosaics are beautiful, ceilings and domes well worth the effort to reach this part of the city. Possibly the most spectacular church in IST.

A drive up to Pierreloti and we are treated to fabulous views over the Golden Horn. Also interesting are the numerous cemeteries in the area. I feel like there are miles of them, which there are. As a genealogist I would love to roam but no time.

Our taxi driver takes us to a section of the 5th century city walls where we are able to climb a series of steep steps to see the famous Byzantine walls of Constantinople. No army breached these walls for over a thousand years and then only because of the introduction of gun powder and some whopping big cannons. The moats that once hindered invading soldiers now are filled with private vegetable gardens.

We are staying at the wonderful And Hotel in Sultanamet with our balcony overlooking Ayasofya and Sultanamet Mosques. The last thing I see at night and at sunrise is the Ayasofya. I awake to this grand mosque outside my window, close enough to touch, with gulls soaring above the domes. The calls to prayer echo from the surrounding minarets throughout the day.

The Management has prepared platters of fruit for my birthday and we climbed to the terrace for even better views of the entire Sultanamet all the way to the Golden Horn. There in the distance we see our ship docked in its harbor. The sunset is beautiful as it glows on Ayasofya.

The Adams treat my sister and I to birthday dinner at a local restaurant where we enjoy a meal of perfect lamb shank and Turkish wine. And the resident maitre d’ cat, “Statue,” is a good ambassador for his race.

Istanbul has perhaps the nicest cats in the world. I think they must attend Charm School and apprentice before taking to the streets. Cats are everywhere and all look well groomed, are polite, talkative and proud of their city. Found around all the restaurants, there are strict rules of begging. If one should dare jump on a diner or table, the cat would immediately be disbarred from public access. Feral cats are everywhere and ready to greet. They are remarkably multilingual and appreciative of their guests’ attentions.

Not only the cats but also the people of Istanbul are the most helpful and kind people I have had the experience of visiting. On numerous occasions we were helped by Turks in the street. Unasked and genuinely kind, people displayed a thoughtfulness I have not experienced on the road. Yes, it still seems most gentlemen in the street own a carpet shop, but at least they are gentlemen.

How much better can cultural exchange get? 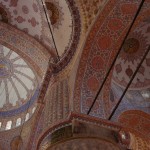 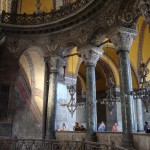 Ayasophia – site of original church built by Justinian in 537. 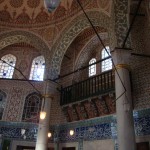 Mausoleum of Sultan and family. 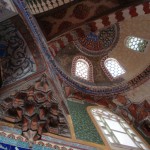 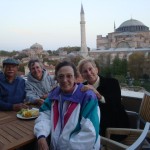 From our terrace at And Hotel. 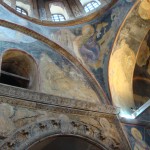