Past the Golden Horn into the Sea of Mamara and thru the Dardanelles. Past the Hellespont and historic Gallipoli with it’s monuments to the Anzac and Turkish dead, the ancient site of Troy, then across a rolling Aegean Sea. Daytime downpours as we pass through storms; lightening flashes in the night sky as we sail into the Mediterranean to Crete.

Orchards and vineyards of Crete

Crete is the largest and most populous of the Greek islands and the fifth largest island in the Mediterranean. While it retains its own local cultural traits (such as its own music and dialect), Cretans identify themselves as Greeks. Irakleio (Heraklion) is the largest city and capital of Crete.

We dock and pick up our rental car from AthensCars at a cost of 40 Euros a day. Of course we have to add gas @ 1.59Euro a liter, or about $8 a gallon. This is still a bargain as ship’s tours cost four times as much and offer less. We set off in our little Fiesta undaunted by place names spelled three ways: Greek alphabet (Ηράκλειο), Latin alphabet (Irάκleio), and thankfully English (Heraklion). Slow readers will be lost. We manage quite well in the intermittent rain and drive out of town to ΚΝΩΣΟΣ (Knossos).

Crete was the center of the Minoan civilization (circa 2700–1420 BC), the first advanced civilization in Europe and the naval power of its time. The impressive ruins of King Minos’ Palace contained over 1000 rooms spread around an area of over 200000 sq. ft. Built about 1900BC, the ruins were discovered in 1900 by Brit Arthur Evans, who excavated and rather creatively told its story based upon mythology and what he imagined all these rocks told him.

The site itself has been inhabited since the Neolithic Period 6700-3700BC. What is seen now is a huge expanse of granite, marble and stonewalls on three levels. Walls are embellished with raised plaster friezes of skinny waisted Minoans and one big mythological bull restored to vibrant colors, particularly red and black (originals are in the museum). The King’s throne, wonderful Minoan columns, evidence of flushing toilets, and that this is the site of the Minotaur in the Labyrinth are the highlights. Knossos and the Minoans declined after 1450BC and we know little of this culture as its script is Linear A and Linear B and no one can fully understand it.

We drive thru mountainous countryside of fertile soil and little rain, except for the downpour today, said to be the first rain in 7 months. The land is covered with yellow fall colors of grape vines and endless olive groves. The villages are old and simple. We see humongous vegetables, especially cabbages the size of large pumpkins.

All is well until we enter Mires as a diversion for a Farmer’s Market blocks our route. A right turn takes us into the narrow streets and alleyways of true Crete. Hopefully following a leader will get us through. I am unsure of the rules but someone always seems to pull over to allow the next car to pass. After 15 minutes, one-way streets are ignored and it is every Fiesta for itself. This is why cars are small! American driver on a standard shift coming through. Not fun but bearable and we finally wind our way back, scratchless and with all mirrors intact, to the left turn. Much better and we arrive at ΦΑΙΣΤΟΣ minutes later.

ΦΑΙΣΤΟΣ or Phaistos is the second most important Minoan palace in Crete. The site spans the Neolithic to Hellenic Periods. The Palace of Phaistos commands spectacular views of the surrounding mountains and valleys and dates 1900-1700 BC. Its large paved courtyards, numerous storage vessels, stepped court and theater and wells make this an interesting site. The king chose his location well.

It is back to the ship for us. Uneventful as I understand the Cretan driver now: drive on the shoulder so others can zoom past. Otherwise they have to run the oncoming car off the road. 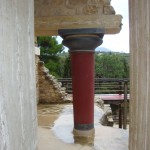 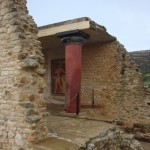 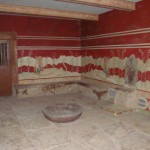 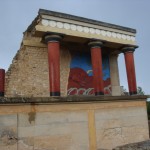 Raised plaster frieze of mythological bull of the Labyrinth. 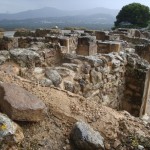 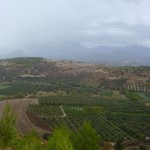 Orchards and vineyards of Crete 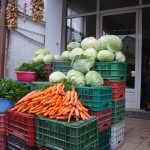