“To travel is to discover that everyone is wrong about other countries.” – Aldous Huxley.

Among the ruins of Carthage

The Tunisian Republic is the northernmost country in Africa. Its area is the size of Georgia with an estimated population of just over 10.3 million. Its name derives from its capital, Tunis. In the south is the Sahara desert, with much of the remainder of Tunisia consisting of fertile soil and 800 miles of coastline.

Tunisia played a prominent role in ancient times, first with the Phoenician city of Carthage, then as the Africa Province that was known as the “bread basket” of the Roman Empire. Vandals during the 5th century AD, Byzantines in the 6th century, and Arabs in the 8th century occupied Tunisia. It passed under French protectorate in 1881 until independence in 1956. Tunisia has close relations with both the European Union — with whom it has an association agreement — and the Arab world.

Official language is Arabic with French a close second, English third, with all compulsory in school. The state religion is Islam and requires its President to be Muslim. However, its constitution guarantees freedom of religion.

Carthage, on the Gulf of Tunis, was a Phoenician colony and home to Hannibal. According to Roman legend it was founded in 814 BC by Phoenician colonists (from what is now Lebanon and Syria) and became a large and rich city and major power in the Mediterranean. The resulting rivalry with Syracuse and Rome was accompanied by several wars with respective invasions of each other’s homeland. Hannibal invaded Italy in the Second Punic War and Carthage weakened after Hannibal’s defeat in 202 BC. After the Third Punic War, Romans destroyed the city in 146 BC.

The Romans later rebuilt Carthage, which became the Empire’s third most important city and the capital of the short-lived Vandal kingdom. It remained one of the most important Roman cities until the Muslim conquest when it was destroyed a second time in 698.

What remains of Carthage are the Antonine Baths with some impressive rock walls, columns, and terrific views. We enjoyed walking around the paths and rooms, all part of the underground floor, imagining what life must have been like for these prosperous people. Their neighbor is the present President of Tunisia who also has great sea front property.

We also visited the extensive cisterns that stored fresh water brought from the Atlas Mts. some 40 miles away. This is the same type of storage cisterns, less the carp, we toured while in Istanbul, but this time we see them from ground level. Then we drove on to Byrsa Hill, site of what is thought to have been part of the royal apartments. Little more than a few rocks here. There are a lot of ruins the Tunisians are unsure of, but they do admit to this. Regardless, we are above the present city of Tunis with sweeping views to the Atlas Mountains and the sea. The museum here is small with artifacts from excavations around Tunisia and is worth a visit.

Across the street from the Carthage baths is the North Africa American Cemetery and Memorial where there are interred 2,841 of our Military Dead. Another 4500+ are listed on the Wall of the Missing.  A high proportion of these lives were lost in the landings in, and occupation of, Morocco and Algeria and in subsequent fighting which culminated in the liberation of Tunisia.

We met Superintendent Carlos Castello, who was our guide. I had contacted relatives of soldiers buried here thru Ancestry.com. With our small American flags we specifically visited these graves, placed flags and took photos to send to living relatives. There are also two Canadians honored here and our Canadian traveler did the same. Our National Cemeteries on foreign soil are special places and it was a moving experience to visit our soldiers who are honored here. Their graves are well cared for and the men and women honored for their sacrifices.

Today, Monday, Bardo Museum is closed. So, we spent an hour or so in the city souks (markets) experiencing the endless stalls selling pretty much the same stuff to tourists and some locals. Jim did bargain for a Tuareg dagger (nomads of Sahara) to add to his collection. The medina area is colorful and active with some great old doors here and there. I was surprised how nice it was as the sellers were polite and it was not the aggressive Hell I imagined it was going to be.

The downtown area is filled with street cafes and shoppers like any other city. I stepped into St. Vincent’s Cathedral and saw it to be large, dark, and fairly unadorned. Some high, small stained glass and little else.

For our private tour we are hiring Tunisia Travel Holiday thru Maltatravelnet.com. Our guide was not much and seemed to be a bit unfriendly, arrogant, and indifferent. Our tour for the day was $75 pp and an okay price but I would not recommend this guide. We were able to pay for admission to Carthage in $USD.

We ended our day watching a magnificent sunset, setting a little after 5 pm over Tunisia as our ship sails easterly back to Malta. 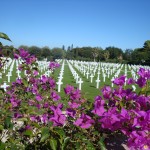 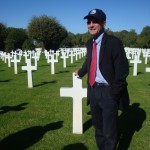 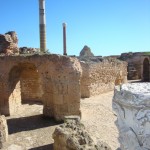 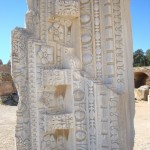 Carthage founded in 814 BC.

Among the ruins of Carthage 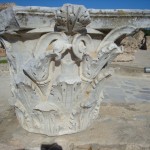 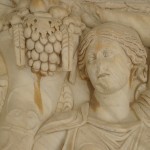 Artifact at Museum at Carthage 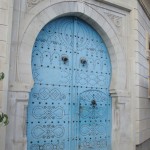