High seas through the Mediterranean, we rock and roll in 13′ swells as we make our way west to the coast of Spain. Too windy to be on deck and waves periodically washing our fourth floor cabin window. I feel as if I am in a popcorn machine as we creak, groan, crackle and pop our way to València.

València is the capital and most populous city of the Autonomous Community of València and the third largest city in Spain, with a population of about 820k. The traditional dish, paella, originated around València. 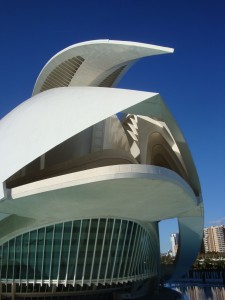 City of Arts and Sciences

Because of the persistent high seas all day and night, we are arriving almost 2 hours late. But the sun shines and weather is clear as we approach the coast of Spain. We dock at the commercial port about two miles from city center. Nautica provides shuttle service to near downtown. It is long on shuttle and short on service. There is one bus every 40-50 minutes and far more people wait than there is room. There are very few taxis at the port. So we manage to shove on the bus and travel into this beautiful city to Plaza el Toro. From there we taxi to València’s new landmark, the City of Arts and Sciences, an avant-garde and futuristic museum complex.

This huge complex includes an opera house, Oceanográfic, Dinosaur Park, science museum, L’Hemisferic planetarium, and more. The architecture is the main reason to venture here. The opera house is a cross between Darth Vader’s and a Centurion’s helmet. White, huge and soaring, it is surrounded by pools of water. I was reminded of the Sidney Opera House on hallucinogens.

We spent some time wandering the extensive Oceanográfic. It is well organized with some up close and personal tanks with good information provided about the different regions of the world of water. I especially enjoyed the walrus and beluga whales. There are the typical “sea world” type shows, too.

Because of our shortened day, we were unable to see more of València. Too sad as it is a beautiful and architecturally stunning city. I have not been to Spain since 1972 and have wanted to return. Guess now I have even more reason to do so.

We sail the night on a southerly course down the coast of Spain. Sea is calm and skies clear. In the distance are the lighthouses along the coast. In the morning we awake to views of the Spanish coastline with snow on its mountain peaks. Our day at sea is sunny and warm, the sea a deep blue. Huge tankers, fishing boats, and occasional pleasure boats are spotted. People are working on their sunburns or enjoying one of the many activities on board.

We will enter the Strait of Gibraltar later this evening, unfortunately after sunset (4:48). The rock doesn’t resemble the insurance commercial but it cannot be missed. Its reputation has drawn a crowd as we sail into the narrow Strait between Spain and Morocco. I can see the lights on both continents. Once thru the Strait, we turn south along the coast of Morocco to our next port, Casablanca.