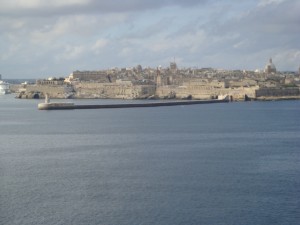 Sun is shining and about 67 degrees as we sail into one of the most beautiful ports in the world – Valletta. Sandstone cliffs and bastions dominate as far as I can see. Domes and spires mark the churches and create a gorgeous skyline on this island of about 300k.

Republic of Malta is a European country in the Mediterranean of just over 121 sq miles (smaller than Denver), and one of the world’s smallest and most densely populated countries. Malta gained independence from the United Kingdom in 1964 and became a republic in 1974 and is now a member of the European Union. The de facto capital is Valletta. There are two official languages: Maltese and English. They also drive on the right here. In fact, Malta is an island of contrasts as its food, language, cars, and every part of life is affected by the influences of past occupations. They produce nothing on the island and rely heavily on tourism. Upon disembarkation, we meet our guide Vince DeBono. Wasting no time, we are driven inland thru narrow streets to Mosta Dome.

Malta has a long Christian legacy and is an Apostolic See. (in fact, flags are half staffed as Malta buries their Bishop today). According to the Acts of the Apostles, St. Paul was shipwrecked on the island. Catholicism continues to be the official religion.

Mosta Dome is designed after the Pantheon in Rome. The dome and interior are simple when compared to many of its contemporaries. The walls are blue and a beautiful silver lamp (with the Host) hangs from the dome. I am told about the bomb that came through the dome in 1942 killing no one (didn’t explode). Quite a miracle for the 300 people praying inside. The wife of one of the American men who disarmed the bomb is also visiting.

From here we drive to Dingli Cliffs overlooking the sea to the south with views of villages and Valletta to the north, I think, as my directions are iffy. The area is very nice but it appears dry, very rocky, with few animals in sight.

We stop in the medieval walled city of Mdina, the old capital of Malta. Walking through the streets is a pleasant experience. It is not overly commercial, there is the occasional horse buggy, and the views from the walls are fantastic. I love the narrow streets: sounds of canaries from someone’s patio, old street sconces, colorful doors and windows, and enclosed Moorish wooden balconies. I could stroll this city for hours. Bought a nice print of the city for 5€.

In fact, views seem to be a highlight from most places around the island. Throughout history, Malta’s location has given it great strategic importance, and a sequence of powers including the Phoenicians, Greeks, Romans, Fatimids, Sicilians, Knights of St John, French and the British have ruled the islands.

Malta is known for its Megalithic Temples, a series of prehistoric monuments that are the oldest freestanding structures in Europe. Archaeologists believe these megalithic complexes are the result of the building of several temples of the Ġgantija phase (3600-3000 BC) and culminated in the large Tarxien temple complex, which remained in use until 2500 BC. We tour Tarxien and its mysterious lintels, walls and rock structures. Vince explains as much as possible but admits much is unknown. It is thought the builders were contemporaries of the Egyptians.

Driving thru the beautiful, clean, quiet streets is a treat. There is a rule that all buildings are to be sandstone and the doors, windows and enclosed balconies are to be one of five colors. I especially like the deep blue and ox blood red. The views from Three Cities included our docked ship and the skyline of old Valletta and our next destination, the Upper Barraka Gardens. At these gardens, we reverse our views and we look east over the bastions, forts and harbor entrance. Views just get better no matter where we stand.

Walking down Republic Street,  we reach what many consider the symbol of Malta – St. John’s Cathedral. In 1530 Charles I of Spain gave the islands to the Order of Knights of the Hospital of St. John of Jerusalem in perpetual lease. St. John’s Cathedral is so unique and impressive with its gold, carvings, marble mosaics, Carrivagio paintings, arches, sculptures and silver that one has to stand within it to believe it.

And because Jim cannot pass up a cannon, we end our day at the Palace Armory. It houses a fine display of armor, weapons, cannon, and banners of the Knights of Malta.

Malta was so severely bombed in the war, the story of its citizens, holding out against all odds and ceaseless German and Italian harassment, is remarkable. The entire population of Malta was awarded the George Cross by the King of England and is proudly included as a part of the Maltese national flag. Just one of many reasons for which this island has to be proud.

For an exceptional private guide of Malta, contact Vince DeBono at v_debono@maltanet.net. He is knowledgeable, interesting and professional. Tour paid in €. 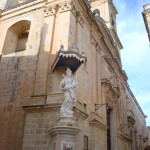 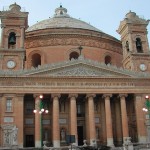 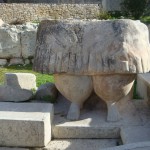 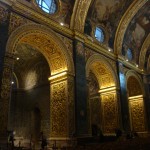 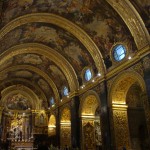 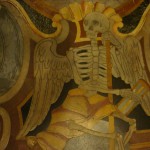 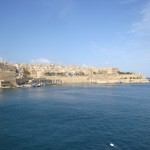 Never pass up a photo with a fort.