On the Path of Lewis & Clark 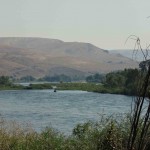 Lewis and Clark along Clearwater River 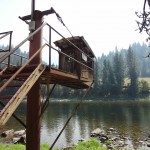 Pulley system over the Lochsa River

28th Aug – Lewiston to Missoula, I am following Lewis and Clark as they emerged from the Bitterroot Mountains and, with the help of the Nez Perce, built canoes and followed Clearwater River to the Columbia and the Pacific. Today, I steer my Honda down the winding 2000′ Lewiston Grade to meet the Clearwater River and drive north into the Nez Perce Reservation. The Clearwater is indeed clear, sometimes calm and deep, other times rippling rapids among rocks and shallows. Its expanse ranges from 30 to more than 100 feet; numerous small bridges and even the occasional pulley system spans its waters.

US 12 follows the curves of the Clearwater and Lochsa rivers through the mountains to the Lolo Pass. Here the forest is lush and green, but smoke from fires are just 2 miles west of the crest. Unexpectedly, I drive most of the day in Idaho, reading countless historic markers about the expedition of L & C, and sad accounts of the Nez Perce – to befriend the White Man only to be betrayed and thrown from their beautiful home in the Bitterroots.

TomTom is patient as I brake for displays, signs, and photo opportunities of the beautiful river and surrounding mountains. Even when I retrace steps for something I’ve missed, TomTom is understanding. But I’m getting cranky as Hell; it’s noon and 90 degrees. Where did I get the idea it would be cold? It is smokey from the numerous fires. And I don’t have the road to myself anymore. Many rafters and fishermen are enjoying the river. It is a scenic drive filled with history, displays, and historic buildings to visit.

At Lolo Pass I enter Montana where they warn about the deaths on this curvaceous road while upping the speed limit to 70. I am in the shadow of the mountain and the temps immediately drop. As I enter Missoula, I can see smoke from another fire just northeast of town.

29th Aug – I awake to rain. Hurrah! Not only have temperatures cooled to long-sleeved weather, but it will help with the forest fires.

Just 206 years ago this week, Lewis and Clark were hanging out in the Missoula area. Sacajawea, unseen and unmentioned on all those historic markers, was hanging out with the boys, sort of a 19th century TomTom. I decided to use my day here to explore Fort Missoula and check out the brewery, probably both popular sights for early explorers.

Fort Missoula was built is 1877, its wood not even dry before Commander Rawn rode to the area of Lolo Pass to confront the fleeing Chief Joseph and his Nez Perce. Ultimately the Fort was finished and the Nez Perce were too, removed from these lush and fertile lands for the dirt of Oklahoma. The fort is an interpretive museum of original historic buildings including schoolhouse, depot & logging train, tipi-burner & sawmill, military barracks, fire station, and detention barracks.

The Museum expertly explained the 1910 “Big Blow” when on 20 August Idaho and Montana had several small fires in various forests, only to have Denver temps drop 19 degrees in 19 minutes, creating winds rushing to the north at 70mph. The fires exploded, burning over 3 million acres in 72 hours.

Fort Missoula’s 25th Infantry was made up of black soldiers who were organized into a bicycle core in 1896. One of their many feats was bicycling 1900 miles to St. Louis. That’s a lot of mountains to cross but they arrived in 40 days. Military disbanded the bicycles in favor of the horse. The black soldiers were sent to Cuba to fight the war with Spain.

Fort Missoula functioned as an internment camp from 1941 to the end of WWII. Its first 1200 internees were Italian merchant seamen, employees of the World Fair, and assorted crews from Italian luxury liners seized in American waters. Japanese internees followed. The Italians called it “Bella Vista,” not sure what the Japanese called life behind barbed wire.

Today’s second highlight is a visit to Big Sky Brewing, home of such tasty brews as Scape Goat Pale Ale, Trout Slayer, and Moose Drool. Bless them as they are generous with tasting. Must be a popular watering spot after work. 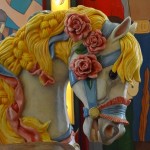 Parking downtown I strolled the Riverfront Walk. Disappointed as I found it poorly marked, requiring me to detour onto the streets. It needs some signs and maybe some trimming of the trees around signs that exist. A highlight is the marvelous Missoula Carousel. Cabinet-maker Chuck Kaparich said “If you will give it a home, I will build a carousel for Missoula.” Indeed he and other volunteers did and it is spectacular with 38 individually crafted ponies.

Downtown Missoula reminds me of downtown Bakersfield, except for the surrounding mountains and a girl walking the streets strumming a banjo. There may be more bicycles than cars. Perhaps the 25th Infantry experiment was successful after all.

It was low 80s today, 38% humidity. Can’t see the smoke to the north anymore. News says temps will drop 40 degrees by Thursday, expecting snow in Glacier on Friday. I might be able to wear my sweaters yet.