TRIESTE – A CITY TO LOVE

Arrived into the lovely port city of Trieste, just across the neck of the Istria Peninsula. What a difference a few miles make! The architecture is Hapsburg, the port is prosperous, sea breeze is cool, and streets are filled with activity. I walk about enjoying beautiful facades in the piazzas, climb the steep steps to the Castello di San Giusto, and then trudge back to one of many restaurants along the Canal Grande for a pasta dinner. 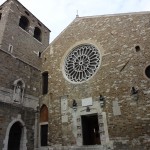 The 15thcentury Castello San Giusto sits on a strategic hill overlooking Trieste, which means fantastic views from the ramparts. Built over the original Venetian castle by Emperor Frederick III of Habsburg, it contains a wonderful museum of armor and edged weapons.

“In memory of the volunteers unredeemed de Trieste, Istria, Fiume, Dalmatia, decorated with a gold medal for bravery”

In the plaza, facing the fortress, stands a memorial to the Trieste fallen in the war of liberation 1915-1918. (Memorials dedicated to those who died fighting for liberation are numerous.)  Other large stones commemorating those fallen in Italy’s other wars encircle the plaza. Below the fortress walls is the Park of Remembrance. Along with the obligatory fountain is a collection of unique rocks, each engraved with a memorial to a loved one who died in the war. A large stone is dedicated, as are many individual smaller ones, to those who died in concentration camps in World War Two.

Beside the Castello San Giusto is the Basilica di San Giusto, completed in 1400. It is Byzantine in style and contains beautiful 12th and 13th century frescoes and mosaics.

The border town of Trieste, in extreme northeast Italy, is at the end of a narrow strip of land between the Adriatic and Slovenia. Throughout history, as early as 177 BC, its location has been hotly contested. Trieste was the fourth largest city of the Habsburg Monarchy. However, with the collapse of the Austro-Hungarian Empire after WW I, the spoils of Trieste, fairly of unfairly, went to Italy. Trieste became a focus of the irredentist movement (D’Annunzio’s fetish), which aimed for the annexation to Italy of all lands they claimed inhabited by an Italian speaking population.

Austro-Hungarian troops, ordered to lay down arms a day before the Armistice went into effect, allowed Italians to slip in to claim the region before cessation of hostilities. A sneaky move but it allowed for Trieste to be officially annexed to the Kingdom of Italy in 1920. Immediately a policy of “deslavification” began and with the emergence of Fascism in 1922, Italianization of the Slovene became a fanatical policy.

By the end of World War II, Allied forces and Yugoslavia jointly occupied Trieste, which became a free city issuing its own stamps and currency until 1954, when the Free Territory of Trieste was ceded to Italy. Outlying cities became part of Yugoslavia and divided between the Socialist Republic of Slovenia and Croatia. Most citizens, who were Italian by this time, welcomed Italian annexation of Trieste. The final borderline with Yugoslavia, and the status of the ethnic minorities in the areas, was settled in 1975. This line is now the border between Italy and Slovenia, a border resented by the Slovenes.

Trieste is a joy to explore. There are endless stores for the shopper, cafes for the sitter, and architecture for the gawker. Lively and well-planned piazzas and pedestrian zones abound. Canal Grande, thanks to Empress Maria Theresa, flows through the city. Particularly beautiful is Piazza Unità d’Italia at the foot of the castle hill in the heart of the city. This lovely square faces the Adriatic and contains some of the most beautiful of the Austro-Hungarian architecture of the period, including the Town Hall and Clock Tower, Fountain of the Four Continents, Governor’s Palace, Teatro Giuseppe Verdi, Stock Exchange, and some bronze war memorials. 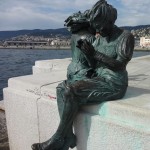 Bronzes along the seaside promenade

Other notable sites I visited included the 1869 Serbian Orthodox Church where the mosaics are especially beautiful. The baroque style Greek Orthodox San Nicolò dei Greci was built in 1787 and is decorated with lovely frescoes. Its twin bell towers add a distinctive touch. And along the sea wall are numerous bronzes among which I can sit to enjoy the view of both the Adriatic and the architectural lines of Trieste.

Atop castle hill (yes I did the climb again but via the steep streets this time) is Museo di Storia e Arte/Orto Lapidario, Trieste’s archaeological collection. It includes prehistoric finds; Greek pieces including a 4th-century-B.C. silver Rhyton, a chalice shaped as a deer’s head, from Taranto; Egyptian collection, including a female mummy; and exquisite little bronzes dating from the 1st to 4th centuries. Outside is a peaceful Lapidary Garden of statuary, funerary and architectural fragments. I say peaceful because I was the only person at the museum. 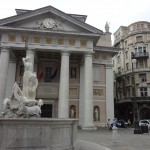 For dinner and another ‘free’ plate, I ride the 30-minute ferry to Muggia, a small village within walking distance of Slovenia, not that I would want to do that. Piazza sitting, enjoying a glass of wine and, be still my excited heart, served a nice Chardonnay and prosciutto and bread for 3€!!! Local families out for the nightly passeggiata. Parents chat while children run wild.

My dinner is a delicious scampi and homemade ravioli at the Buon Ricordo Restaurante al Lido. I am forewarned when they tie a bib on and hand me those awkward shellcrackers. Eventually I give up and just do a Daryl Hannah and rip the scampi apart. I have a finger bowl as muddy as the Arno when finished. Because of the late hour, I ride the bus back to Trieste. Rain has returned, in small amounts, and has brought a welcome coolness with it.

May I say a word about the infamous Italian strikes? I have found them to be incredibly civilized about this matter, announcing strikes well ahead of schedule. For example, I have known since April there would be 4-hour national transportation strike on 4 June. For local transport, essential services continue for peak times. Some long-distance trains are also guaranteed. Before a strike, the Trenitalia online site generally posts a list of trains confirmed or cancelled. They also list regional trains that will run, generally one or two trains in each direction in the main commuting times. Forewarned is forearmed. Works for me.

Tomorrow I must depart this wonderful city and trek further north bound for Padova, better known as Padua, site of Shakespeare’s love contest between Richard Burton and Elizabeth Taylor. However, I subscribe to the travel philosophy “When in Rome do as the Romans do.” Therefore, I am, with confidence, taking Trenitalia to Padova. 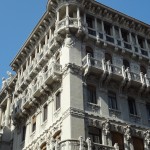 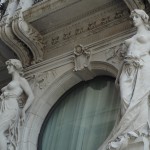