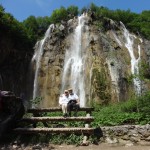 Because of its ragged horseshoe shape, we reenter Croatia, requiring us to once again get off the bus and individually go thru customs. Shaky relations between these two countries – a continuation of East verses West? One Balkan school of thought considers the differences between the Roman Catholic and Serbian Orthodox so great it transcends possible racial or linguistic unity. Through centuries of Balkan wars, both with each other and outside forces, there exists a passion to unite all Serbs, yet Yugoslavia’s King Alexander 1921-1934 meant to unite south Slavs and Serbs and had no wish to include Croats and Slovenes (Catholic) in his kingdom. Politics to ponder as I travel thru the rich farmland of Slavonia to the capital city of Zagreb Croatia.

I immediately develop a liking for this lovely city. Mostly rebuilt after an 8.0 earthquake in 1880, it is easy to walk, architecture is interesting, pedestrian areas, cafes, museums (none for us as they cost money), parks, trams, and flowers abound. I can see a European influence, the print is still Cyrillic but English is spoken everywhere. The train station is convenient and right across from my hotel. 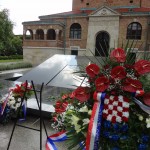 We visited the monumental Mirogoj Cemetery created in 1876, where 300,000 of the rich and richer are buried. Includes long arcades and cupolas designed to inspire. Franjo Tuđman has a very impressive slab of granite and many flowers. He is well thought of as the bringer of independence to Croatia. No mention of killing and forced resettlement of Serbs from the Krajina region of Croatia. Did he and Slobodan Milošević secretly agree to divide Bosnia and Herzegovina? Had Tuđman lived beyond 1999, he possibly would have been charged with war crimes by the UN Yugoslav war crimes tribunal in The Hague. 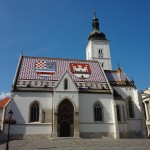 Walked pleasant streets to the 13th century Church of St. Mark. Its roof tiles are laid to represent the coat of arms of Zagreb (white castle on red background) and Triune Kingdom of Croatia, Slavonia and Dalmatia. The tiled roof reminds me of the cathedral in Vienna. The church interior is simple with clean lines and a vaulted ceiling. I could only look at the façade of the Cathedral of Zagreb as mass was in progress. The Cathedral is quite impressive with a plethora of sculpture. I hear about museums and places to see – on our free time. After our daily church fix, we ate dinner where we again enjoyed good salads and coffee.

Eating in the Balkans is a good dining experience. The most interesting part of breakfast is the table with olives, pickles, salads, cheeses and meats. I can choose healthy grains, traditional eggs, or finish dinner. Juices and fruits are superb. The coffee ranges from passably good to “it would kill the geranium if dumped in the pot.”

Lunches are good but large, salads were wonderful everywhere, vegetables and potatoes were excellent. However, restaurants think we plow fields as food amounts are staggering. We eat a huge lunch and maybe 6 hours later are served a huge dinner. I dug out my Levi’s from the bottom of my suitcase and they barely fit (:-(((

After dinner, Carol and I returned to the Cathedral to enjoy a choir concert and their blasting, dramatic organ. The interior is quite nice and behind the alter is the tomb of Blessed Aloysius Stepinič, the controversial Archbishop of Zagreb. Controversial in the world, revered here. The walk back to the hotel was just ahead of the lightening and rain, that pre-storm time that can be so pleasant. Beautiful sunset. Zagreb is a wonderful walking city and worth more time.

Two hour bus ride southwest thru villages and farms where I still see many houses with bullet holes and mortar damage of early 1990s when Serbs and Croats disputed this Krajina region of Croatia. Serbs wanted to claim Krajina for Yugoslavia and Croats wanted Serbs out their territory. For a time, even the national park was occupied by Serb military who mined the area and threatened to blow the fragile park to pieces. The area of Banjo Luka just south of Bosnian/Croatian border, now part of Republic Sparskic, is where some of the fiercest fighting occurred. The war, or at least one of the many, is never far away. 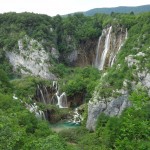 Plitvice Lakes National Park is the oldest national park in Southeast Europe and a wonderful escape from politics and warmongering. The par, founded in 1949, is situated in the mountainous area at the Bosnia and Herzegovina border. Because of the shape of Croatia, wrapping itself around northern BiH, this important north-south road connection, which passes through the national park, connects the Croatian inland with the Mediterranean coastal region.

This UNESCO site is known for its lakes arranged in cascades. Currently, 16 lakes can be seen and are a result of the confluence of several small rivers and subterranean streams. The lakes are interconnected and separated by natural dams of travertine, which is deposited by the action of moss, algae, and bacteria. The sensitive travertine dams are created by an interaction of water, air and plants. The encrusted plants and bacteria accumulate on top of each other, forming barriers that grow at the rate of about a third of an inch per year.

The 16 lakes are separated into an upper and lower cluster formed by runoff from the mountains, descending several hundred feet from an altitude of 2,087′ over a distance of some 5 miles. The lakes are renowned for their distinctive colors, ranging from azure to green, grey or blue. The colors change constantly depending on the quantity of minerals or organisms in the water and the angle of sunlight. The park has many endemic species and varied flora and fauna. The water is unbelievably clear and filled with some pretty large carp and some very noisy frogs. 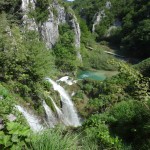 I hiked this beautiful area, along with hundreds of others, but it is a welcome respite. There are scores of waterfalls with the highest one falling 250′. Hiking was mixed with a nice boat ride across the lake amid thunder and lightening. And of course our day would not be complete without some rain, this time a downpour. After a trout lunch, we returned to Zagreb, stopping for a photo at the little village of Slunj which has its own set of cascades and water falls.

I must write Ralph when I get home and complain about my new Polo shoes. They do not do rain and I am leaving little polo ponies all over the Balkans as my shoes fall apart from the moisture. They are cracking and pealing like a leper.