CHITWAN – ‘The Heart of the Jungle’

CHITWAN NATIONAL PARK, 14 Oct: Unbelievable! It has become our mantra thanks to Peter, who says the word is universally descriptive and can fit any occasion. We use it a lot. Today was no exception. Awoke before dawn to clear views of the Annapurna Range including Annapurna South, Fishtail, Annapurna Three, Four and Two. One remains allusive behind the others. The entire range was lit with the sunrise. All are “UNbelievable!”

We departed for a 6-hour bus adventure to Chitwan National Park, meaning ‘heart of the jungle.’ We stop for one last magnificent view of the Annapurnas plus the ranges to the west and east, putting this awesome valley, its mountain ranges and numerous snow-clad peaks into perspective. I have seen Everest only from 36k ft, but feel in name only does it best this magnificent range of mountains.

It is the 8th day of the festival and roads are relatively quiet; passing busses are filled to bursting, passengers and goats on the roof, human celebrating but the furry one not. Many times we see men in front of homes, each group foretelling the slaughter of a buffalo or goat. Sometimes we could see them stoking the fires that would burn the hair off, other times cutting up the meat into portions for the families that purchased a portion. Few families can afford more than a kilo or so of the meat, legs or head. People are unable to store meat so most is used today for the feast.

Numerous tall bamboo swings are enjoyed by the children. They look dangerous as youngsters soar several feet while standing on the seat. Fathers have cut four giant bamboo branches, then bent and tied them at the top to create a swing of 20ft or more.

We follow the same UNbelievable road along the Marshyangdi River passing small villages and terraced rice fields, market towns, forested hills, long spans of foot-bridges, and the everyday life of these hard-working people. Large, three-story houses of colorful brick design with brightly colored trim, posts and doors are common. We are told these are owned mostly by Gurkhas. Others are thatched roofs, ochre-colored mud houses made from a mixture of cow dung and mud. Then there are the shacks that look uninhabitable, made of tin and wood, anything to give their owners a roof over their heads. Some of these are occupied by the young women who were bartered into prostitution into India as young girls, developed AIDS and now returned to Nepal.

Entering Chitwan, we meet the ethnic tribe of the Tharu, local inhabitants of Chitwan who are farmers by profession. The fields seem larger and are flatter. We see less sacrificing of buffalo here as the people cannot afford the meat and they also use buffalo for the fields. The high rolling hills, deep gorges down to the rushing silt-filled rivers, and thick vegetation are quite a change of scenery. Every once in awhile, snow-capped peaks can be seen in the distance. But it is obvious, we are in lower, marshier land, once the home of killer malarial swamps.

By lunchtime, we arrive at our jungle destination of Temple Tiger Green Resort in Amaltarighat, near the Narayani River. Nepal has taken steps to preserve the park and its animals so the resort is located in the park’s buffer zone. Temple Tiger is described as “rustic” and “sensible but not luxurious.” In actuality, the rooms and resort are very comfortable and pleasantly designed. It is quite hot so the air conditioning is very welcome. It even has wifi! 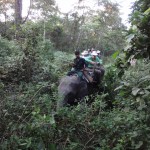 Our afternoon was UNbelievable! We boarded Asian elephants and went for a two-hour safari through the jungle – fording rivers, through dense trees, vines and 15ft elephant grass. We saw a family of wild boar, three rhinos, a barking deer who does bark, and several pheasant and pea fowl. But the best part was the ride. Enjoyed watching the elephants interact with the jungle, pushing through the trees and vines, and munching all the while. The driver directed the elephant’s progress with the kicking of his feet behind the elephant’s ears. For some reason, she willingly obeyed.

Beautifully costumed Tharu village teens entertained us with local dances and songs. They enjoyed pulling us into their circle to dance with them, amused by our efforts to mimic their movements but everyone had fun. We then ate another tasty dinner and conversed about our day before being chaperoned to our lodges. Not sure if this was for our safety or too dark to see paths. Or tigers?

I hear wonderful and strange sounds outside my room, nothing man-eating but exotic enough to remind me I am in Nepal’s jungle.

I am spoiled by this personal service. Awoke when the air conditioner came back on at 4:30 and laid awake listening to the sounds of birds, among them a pair of hornbills, and know-not-what else in the trees behind my thatched hut. Coffee served at my door at 6:30. 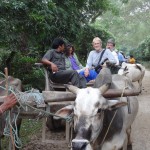 Morning began with an ox cart ride to a Tharu village to observe their culture and visit their museum. Friendly, clean, hard-working, they invite us into their homes for photos and gawking. Villagers must think we’re nuts being so curious about their lives, their cows and cooing over an adorable newborn goat trying out his legs. Children are happy and friendly. I gave them the rest of my pencils; don’t know how many attend school.

Rode the ox cart back to the lodge. Amazing but the oxen bow their heads for the driver to place the wooden bar with which they pull the cart. Sort of like Marie Antoinette did at the guillotine.

After breakfast, a jeep took us into the jungle in search of four-footed things. It is cloudy today so they may be more active; I know I am more comfortable. I did see more pea fowl, four boars, a barking deer and a spotted deer. After driving all over in the elephant grass and forests, we boarded boats to flow with the tide and watch for crocodiles. Nepal has the endangered gharial, which has a long thin jaw. Think we saw just a regular little croc lazing on the shore.

We debarked in a bit of rain to board jeeps thru more jungle to the old Temple Tiger Green Resort which was shut down a couple years ago in an effort to preserve the park. It is a spooky place because all the buildings are there and it looks like everyone just picked up and left without closing the doors.

We had an elephant talk by our park guide. He explained the differences between African and Asian elephants. Present for the talk were a mother elephant with her four-year old daughter. At the end, we each were able to feed the elephants a favorite type of sandwich. Momma ate the whole thing but baby was a typical kid and ate the rice inside and spit out the leaves.

During lunch at the lodge it began to rain harder so our guide talked about the animals of Chitwan. The park is almost 1000 sq. km and abuts similar parks at the Indian border just a few miles away. The elephants, rhinos, deer and tiger cross back and forth. We then braved the rain, which mostly did not reach through the canopy of trees, and dared one more hike among leeches. It was worth it because we did see boar holes, termite mounds, a rhino toilet, and finally some beautiful big Bengal Tiger tracks only about a day old. 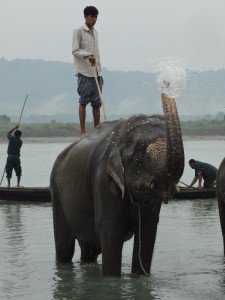 Jeeping back, we boated across the river to partake in the bathing of the elephants. (We could assist but my better judgement resisted stepping into what I saw as very polluted river water.) It is quite an end to the day – but wait – there’s more. One of the refreshed beauties came ashore, sat down, and patiently allowed us to perch on her leg for a photo.

Our last morning was meant for another jungle elephant ride. However, Cyclone Phailin hit eastern India and the monsoonal rain it brought has continued throughout the night and morning. We agreed to keep the elephants dry. So I donate my hiking boots to the village and after breakfast we leave for Kathmandu.

It is the 10th and most important day of the festival when the daughters and sons receive the blessing from their parents. Roads will be relatively empty. It is just the rock and mudslides to concern us.

I am in Nepal.