We travel, initially, to lose ourselves; and we travel, next to find ourselves. We travel to open our hearts and eyes and learn more about the world than our newspapers will accommodate.

TAHACHAL NEPAL, 9pm, 4 Oct: After rooftop breakfast and much talk with my Nepalese server at the Backyard, I took a taxi to meet my group at Crowne Plaza in Tahachal, just south over the bridge from downtown Kathmandu. Cost was 300 rupees but gave him a 30% tip for the adventure and getting me there unharmed. Now I just follow the flow and Niraj my Road Scholar leader.

Crowne Plaza is a change of cultures and caste with typical luxury for the Brahmins of the world. And of course a charge for Internet: as one pays exponentially more for luxury, luxury has the nerve to charge for what normally is free. Sort of like the airlines. Niraj is a Newari from the Kathmandu Valley, known for their creativity and colorful festivals.

Best news, encouraging me to do a ballywood dance: I am a “forced single” which means I have a room to myself. Second best news is only six are in the group. Means no wait for toilets and a small bus to get thru streets. 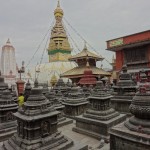 Our first excursion was to Swoyambhunath stupa, the “monkey temple,” a golden spire crowning a wooded hill and the most ancient of all the holy shrines in Kathmandu Valley. Its white dome and golden spires are visible for miles. It is a large complex of stupas, temples, monasteries, monkeys, and prayer flags fluttering in the breeze. This stupa was already an important Buddhist pilgrimage destination by the 5th century AD. Don’t know when the monkeys arrived. From here we bussed downtown and walked Durbar Square. Seems a little less crowded but maybe easier because of our guide. Visited home of the living goddess Kumari and were honored when she came to the window. She is the only living goddess in the world and is 10 years old but will be retired when she reaches puberty. Tough life for a goddess. Walked thru market before riding rickshaw back to bus. Survived both.

Our first speakers of the evening are a professor and two students. Lectured on history of Nepal and Kathmandu. Summary: three levels of school, Community costs $2-3 a month, less expensive private $25-30 month, expensive private is $150; start school age 3 but not required; many youth leaving Nepal to work Saudi Arabia and economy relies on their sending money home to family; average wage is $1200 a year, much from son working abroad; 81% Hindu; total freedom and cooperation among religions; 125 ethnic groups, 123 languages with very different cultures extending to food, clothing, and religion. Caste system is dying out in cities and with young. But restrictions on who marries and parents still arrange match. Son important as need son to pray parents into next life. At one time 67 principalities with own king, three in Kathmandu Valley. “Religion not a problem here, no conflict. Peace loving people. Caste system but freedoms, no segregation of caste and religion.” Election for new constitution in Nov. Their talk was very optimistic.

Our morning speaker, a professor and journalist, was honest about problems to be surmounted. He openly discussed Nepal and politics. Explained: 400 university campuses, 600k students but poor education.  China not directly involved in politics, but India is. More than 60% communist party but over a dozen parties so Maoist have no majority, most are religious with traditional lifestyle. Parties used name of Mao as opportunists? If they ruled it would not be a disaster but they do not do what they say. Maoist control most of rural areas and India supports them. Kathmandu residents supported military in civil war. Maoist prime minister backed by India. There is a saying “If Chinese spit, India urinated, it would drown Kathmandu Valley.”

” Maybe” parliamentary election in Nov. Critical of corruption of Chief Justice, bar system, leaders but none resign. Conflict of interests. Unemployment #1 problem.  Viewed as most corrupt government next to Afghanistan, bribery everywhere. Supported by US and UN. 3+million semiskilled construction workers in Saudi Arabia, Qatar and send wages back to families; a flood of their youth leaving the country. Increasingly dependent upon India who is influential in Nepal, Bhutan and B’desh. 10% of officers’ salary for electricity and water, education takes most of rest so corruption has to fill the gap to survive and buy a car (pay additional 150% car tax). Roads thru Nepal linking India and China will be game changer. Bit of anger that no sitting American president has visited Nepal but Obama did go to Burma; they recognize the hypocrisy of US political interests. Belief in Nepal’s practice of democracy as better than all other parts of South Asia. Issue of Dali Lama and his visits can disrupt balance and upset Chinese communists which means the 60% communists in Nepal.

Who calls bandh strikes? So many parties want a piece of the pie, little agreement. Any group of 10k can call strike and hold country at ransom, others fear consequences so close shops and city shuts down. Go thru streets with torches the night before to alert of strike, after morning milk delivery they shut down streets, burn a few vehicles, country shuts down. Next day all is well, demand release of arrested members or else. No one ever prosecuted for what happens. 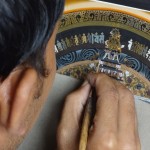 Thangka school – years to do these intricate drawings

Our second day included trip to Bhaktapur and Patan both UNESCO World Heritage Sites for their rich culture, magnificent stupas and temples, and wood, metal and stone artwork. Explored crowded streets and Durbar Square of Bhaktapur, an ancient Newari town in the east corner of Kathmandu Valley. This third largest city in the valley was once capital of Nepal during the Malla Kingdom until the second half of the 15th century. It is the home of traditional art and architecture, craft works, carved windows, pottery making and weaving industries. The temples continue to amaze me with their variety, carvings, symbolism and tradition. Toured a thangka painting school where students train for years to do these intricate line drawings. 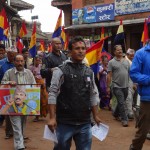 Lunch in Bhaktapur overlooking a busy squares. The streets are filled with several groups of political party supporters, each with their own flag, shouted slogans, drums, horns, and loudspeakers. They are going to the offices to register their candidates for the upcoming elections. There are 372 candidates contesting from 10 Kathmandu constituencies. The Democratic Congress is largest, the Maoist and other communist groups follow. Plenty of military and police presence, some armed with riot gear. All quite exciting as they march and shout for their candidate. Many speeches on the stupa all promising change. 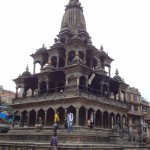 Explored Patan (Lalitpur) which is full of marvelous monuments within the limited space of Durbar Square. Besides the old royal palace, which dominates, the best site is the 1637 Krishna Mandir. Entirely made of stone, this structure has 21 pinnacles dedicated to Lord Krishna, a Hindu deity, and is equally noted for rare stone carvings on its walls which depict various episodes of the epic wars of Ramayana and Mahabharata. Like other Durbar squares, there is a plethora of landmarks, stupas, temples, people and merchants. We stopped at a shop selling singing bowls and got a lesson about their use in healing. 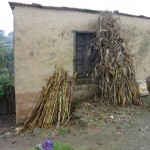 Today is my “training hike.” We drove to 7200′ Nagarkot then hiked about 4 miles down the mountain toward Bhaktapur through the villages of mixed ethnic groups such as Gurung, Newar, Tamangs. Nagarakot is known for views of the Eastern Himalaya and panorama of Kathmandu Valley. Unfortunately, rain and ever present clouds do not allow for much of a view but the forests and hills are beautiful and mysterious. And I saw no leeches. The “road” is muddy, potholed, rocky, and uneven. The terraces of rice and other crops, villages of hardworking people, chickens, goats, buffalo, water wells, children returning from school, and village life in general gives a glimpse of Nepalese life outside Kathmandu. 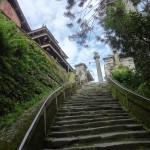 Only Nepalese direction is UP

Drove to Sankhu, the oldest known urban settlement in the valley with 2097 living in 353 individual households. Its name means ‘close to Tibet’ and it was a major trading station between Nepal and Tibet. Above the town, high on the wooded hillside, sits the beautiful 17th century Buddhist temple of Vajra Yogini. Because of the closed road of deep mud, we had to climb all the way; too exhausting to count the steps. It was only 5000′ altitude but high humidity. What a challenge! At the top, amid my gasps for air, stood a magnificent gold temple, monks’ caves, and more monkeys. And supposed enlightenment – mine is that I would have to be a flat-land Buddhist and hiking up Nepal’s endless steps will be a challenge.

Our drive back to Kathmandu was less than 20 miles, but took more than 2 hours! Tomorrow, I escape from Kathmandu and head for the Annapurnas of the Himalaya.