Glorious Annapurna – ‘Goddess of the Harvests’

Me and Annapurna South

SANCTUARY LODGE, BIRENTHANTI, 3750ft, 8 Oct: What a glorious morning, not a cloud in the sky and clear vistas of Annapurna South, Annapurna Fang, Gangapurna and Fishtail. The morning is quiet as I sit and watch the mountains just before dawn. I wouldn’t think it could get much better – until the sun rose and the peaks were slowly, one by one, bathed in its glow.

The absence of clouds seems to denote the rainy season is over, done. Now it is blue sky, puffy white clouds and warm temperatures. Wisps of snow blow from the peaks and clouds begin to build during the day to once again play hide and seek with the mountains. But no rain. It’s a glorious day to hike the Annapurna.

I have heard little about the Annapurna range – it is always Everest stealing the limelight (kind of like the pandas over the Formosan Black Bear in Taiwan). In 62 years following its first summit, only 181 climbers have summited Annapurna I — more than 400 people summited Everest in the 2012 season alone. Those who call Annapurna the “world’s deadliest” are most likely referring to its claim of the highest death-to-summit ratio of all the 8000-meter peaks. Through August 2010, 183 climbers had summited Annapurna’s 26,545-foot peak and 61 had died trying. 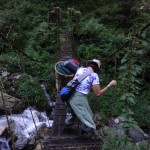 Up hill and down dale, over bridges and streams, up and down steps

We trek down into the valley below to the village of Birethanti, knowing we must hike up the other side of the mountain tomorrow. The trek today is short, only about 3 hours. Before we leave, the village children sing for us. It is a good start to our day. We passed through the middle village and began our descent to the lower village via a series of steps to the main trail. The trail is a mix of gradual descent on rocky path to steps ranging from a few inches to 16″ or more. Vistas are everywhere to enjoy: the rice and wheat paddies, terraced landscapes, young women doing laundry or cutting grasses for the cow, women carrying heavy loads of fodder and firewood up the steps, peaks of the Annapurnas.

It is hard to imagine the vistas and even harder to pause to enjoy them. I have to keep moving faster than leeches, watch my footing, concentrate on balance and trajectory. It does not take much to slip on a rock. Uneven steps do not allow a lack of focus. I want to gaze at the mountains, forests, terraces and villages but dare not be distracted from where to place my next step. My porter is a guardian angel to me, always there with his hand out to steady me and offer assistance up or down steps, across streams, and along narrow foot paths. I sometimes feel I do not need him but have to admit he is important to my safety. Sometimes I realize I am squeezing his hand pretty tightly, but he never complains. Not only his back and neck must hurt, but to these pains I must add his fingers too. 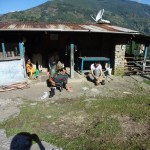 It was at least 45 minutes going down stairs, and a half hour switchback trail all with the sounds of the Modi River roaring below. A long stretch was through damp tropical grasses and a trail inundated with leeches. Once we crossed a river via a rickety bridge, we arrived at a village house. The guides borrowed some hot coals and proceeded to de-leech everyone and threw the leeches in the coals.

Leeches are wiry and fast. They can bite and one does not really feel it, then they excrete a chemical to thin the blood so they can engorge themselves and grow as large as a pencil in seconds. It is all quite disgusting and they deserve the coals. The villagers are friendly to strangers passing thru and found our antics quite amusing. Leeches are common to them and they make no fuss. I am happy to say I have only had one on a finger and rapidly flicked it off. Dear Yam has been beside me with his little stick and gauze packet of wet salt and does not hesitate to pick them from my shoes. Also, I have used Deet and I think that has helped. Some of the group have had them bite and get in their socks and on legs. And the blood is what tips one off as once the leach drops off, the wound continues to bleed; that explains the drops of blood along the trail. 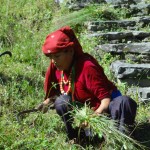 Women cutting fodder for the cattle

We continued down the hillside to walk along the Modi for a short time before crossing a new suspension bridge. We  arrived in the village of Birethanti where one of our porters lives. We met his family, relaxed on their terrace, and checked out the raksi still in back where his mother  makes the millet raw alcohol. It was a short walk further along a fairly decent road to Ker & Downey’s Sanctuary Lodge in Modi River Valley. We are next to the rushing Modi which fills the air with its roar. The gardens are beautiful, attracting many butterflies and birds and all fill the air with fragrances and song. I also have a clear view of the sacred and unclimbed Machhapuchhre, or Fishtail, as it is called here. 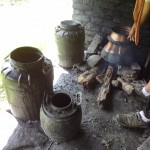 It is hot and clear. Our clothes, always damp, now dry in minutes. Laundry is free but it seems pointless to wash a t-shirt when I will drench it tomorrow and just toss it. Same for my shoes as they are getting a beating. Have to change shirts three times a day: morning trek and it is drenched with sweat, afternoon trek and relaxing, the evening with sleeves for the cooler nights. The hair! The humidity is so high my hair is a total loss.

In the afternoon, we take an optional hike to the village of Birethanti and the nearby Rhino Waterfall. There is a much larger 40+ ft waterfall along the way. The Modi is fast and tumbling among giant boulders. Most is filled with silt but as we climb to the falls, the water becomes clear. On our way back, we stop in the village to see the cultural museum, post office, and art gallery. While there, a man brings his caravan of horses loaded with goods up a flight of steps onto downtown main street. We’re the only ones interested in them. Also we see cute little mountain goats destined to be sacrificed in a few days. It is a snug, supportive community where the women have the leadership roll.

The Sanctuary is indeed a sanctuary of gardens, nature, roaring river and mountaIn views. Just 10 comfortable rooms replete with down jackets, the standard slate bathrooms and Nepalese decor. Alas, the lodges do not have wifi but I do usually get a cell signal. The electricity is passable, only one spider, and no mosquitos. The afternoon tea is served at our door and dinners are tasty. Also there is a fantastic bar area complete with central fire place for my happy hour drink. Tonight it is Everest beer in honor of our mountain summit tomorrow.