Most every travel list I see rating favorite cities, most traveled destinations, top ten cities to visit, places not to miss includes Bangkok. I arrived in this city yesterday afternoon to snarled bumper to bumper traffic. A city of 10 million, most are in cars. The skyline, what can be seen through the dense smog, is one of skyscrapers. The sunrise this morning resembles a red moon over the Chao Phraya River. Streets are overrun with Chinese tourists hell bent on endless selfies. For a traveler, I scratch my head in wonder. What is the draw of Bangkok?

I keep having “duh” moments. The dance, dress, sculpture and architecture here reminds me so much of Siam. Duh (imagine head slap) – I am in Siam!! My recall is of the many photos I have seen, but also of the 1956 film “The King and I” which supposedly took place in Bangkok’s Royal Palace in 1862-1868 during the reign of King Mongkut (Rama IV). He was one of the most revered monarchs of the country (current King is Rama IX). Yul Brynner played the King and received an Academy Award, as did costuming and production design. The film is banned in Thailand.

The Royal Grand Palace is over the top with stupas, temples, glitter and gold. The Kings lived well. Except for the 30,000 other tourists, this is a must-see site. The Grand Palace complex was begun in 1782 and consists of the royal residence, throne rooms, government offices (usually in a western modern style) and stupas, stupas, stupas. The entire 53 acre royal complex is enclosed in royal walls. Today, the Royal Palace and Throne Room is used only for coronations and hosting dignitaries. The Royal Family lives elsewhere.

The traditional Thai three-tiered roof is predominate. And every whitewashed surface is covered in porcelain, reflective gems, and mirror shards. Every inch is decorated with intricate designs, color, and glaring glass. What isn’t reflecting the light is in gold – blinding gold. The Royal Monastery walls are galleries of hand-painted scenes of the Ramakien, battle scenes, and Hindu legends – yards of them.

There are countless beautifully designed buildings. The huge golden stupa holds some ashes of the cremated Buddha and is a most revered site. There are numerous stupas for the deceased Kings and the Royal family. Meeting rooms, prayer rooms, dressing rooms, storage rooms, rooms for Buddha’s scriptures, richly decorated and ornate rooms. It is far more than the eye can comprehend. Whether I look up, down or sideways, there is something to admire. The forms, lines, colors and textures are spectacular.

Perhaps the most stunning building is Wat Phra Kaew which holds the Emerald Buddha. The walls are covered in murals of Buddha’s life. There is not a corner nor crevice that is not painted. The Emerald Buddha is carved from a piece of jade and has its own seasonal wear. Today he is clad in gold cloth for the winter season. Seated on a gold throne, the statue itself is quite small, perhaps only 2-3 ft tall.

I especially liked the numerous carvings of garudas, monkeys, elephants, soldiers, mythical beings, and wonderfully carved and ornate demons throughout the complex. Demons are about 12′ tall and guard every corner of the Royal Enclosure from evil spirits. Fierce faces, big teeth, and long swords were meant to scare off evil. Wish they could scare off some of the tourists and their selfie camera wands. 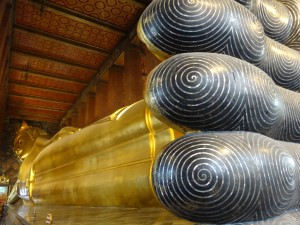 Behind the Grand Palace is the ancient temple of Wat Pho which is not just another Wat. Wat Pho is named after a monastery in India where Buddha is believed to have lived. It was begun in 1781 and is beautiful traditional Thai architecture with tile roofs, glittering gold and porcelain, mythical creatures and stunning murals. But it is the Reclining Buddha that steals the show. The statue is called ‘Reclining’ because Buddha is reclining – all 160 feet of him. Made of brick then stucco, Buddha was then covered, every inch of him, in gold leaf. The 45′ high Buddha reclines with his right arm supporting a head covered in tight curls and resting on two box-pillows richly encrusted with glass mosaics. His enormous feet are carved with the 108 auspicious symbols of Buddha.

The hall where he reclines is a series of spectacular murals depicting the legends of Buddha. The 108 bronze bowls are for offerings.

In the small garden, there is a bodhi tree which is believed to have been propagated from the original tree in India where Buddha sat while awaiting Enlightenment.

Ready for my next message?

This temple is also home to one of the earliest Thai massage schools. Traditional Thai massage and medicine is taught in an open-air hall. Medical inscriptions inside the temple act as a base for treatment. There are 60 inscribed plaques, 30 each for the front and back of the human body. Therapeutic points and energy pathways are engraved and the explanations are carved on the walls. Figures represent relationships between anatomical locations and effects produced by treatment at those locations. Several statues around the gardens depict various techniques, some curious and some positions a bit awkward.

What another Wat? Wat Arun lies on the west side of the Chao Phraya River and is the site of the third capital and royal palace of Siam/Thailand. It was Rama I who decided this site was unsuitable so moved across the river to build the fourth capital and his Grand Palace. A Buddhist temple had existed at the site of Wat Arun since the time of the mid-1699s. The temple enshrined the Emerald Buddha image before it was transferred to Wat Phra Kaew on the river’s eastern bank in 1785. The temple was located in grounds of the royal palace during Taksin’s reign, before his successor, Rama I, moved the palace to the other side of the river.

The main attraction of Wat Arun is its central prang, a 280 ft Khmer-style tower, which is encrusted with bright and colorful porcelain. This is a stupa-like pagoda with steep and narrow steps leading to a second-level balcony and rewards me with exceptional views of the river and the Grand Palace skyline. The entire prang is decorated by seashells and bits of porcelain which came from China to Bangkok as boat ballast. Construction of the tall prang and four smaller ones was started by King Rama II after 1809 and completed by King Rama III (1824–1851). The towers are supported by rows of demons and monkeys. Around the tower are figures of ancient Chinese soldiers, mythical animals and Hindu gods.

The presiding Buddha image, cast in the reign of Rama II, is said to have been moulded by the king himself. The ashes of King Rama II are interred in the base of the image.

After lunch, we board a long-tail boat for a pleasant journey along the river and into the back canals of Bangkok. Houses along the canals range from very expensive teak homes, from sturdy cement and stucco to wood houses built on pilings that look close to collapse. The canals are slightly trashy and some homes look as they could benefit from a serious garage sale. We pass the occasional sunning Monitor Lizard which looked large enough to eat someone’s pets. The Chao Phraya supports a thriving community along its banks from restaurants, fruit sellers, laundry facilities, and even temples – all accessible by boat.

One clever lady who has staked out a portion of the river and built up a “fish feeding” business. She has trained the local cat fish, some as much as 8 pounds or more, to congregate in her area. Then she sells old Wonder Bread loaves to passing boats of tourists, exchanging loaves for money in her pole basket. Feed a fish and more will come, scores. Its a feeding frenzy of gobbling, jumping, wide-mouth fish.

The King’s Royal Barges are collected in a building along the canal. There are six long-tail royal barges each manned by 50-60 oarsmen. The barges are as richly decorated as everything else royal. The King, on very special festival days of celebration, can be seen atop his royal barge sailing down Chao Phraya River. 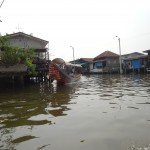 Our boat cruises thru the canals, past homes and laundry, under bridges and walkways, past patios and gardens. It is quiet here, nothing like the noisy streets we have traveled earlier. The waterways have a charm about them but I do wonder what kind of sanitation the homes have. Is there trash pickup? I can see years of junk collected around some homes. The boat exits the canal into Chao Phraya and takes us directly to our hotel’s dock.

I am still looking for the reason for Bangkok being on so many top ten travel lists. The Royal Palace should not be missed nor should the Reclining Buddha. The canal tour is great. I enjoyed climbing the steps of the prang at Wat Arun. But limiting the appeal for this city is the traffic, severe air pollution, heat and humidity, a plethora of Dengue-carrying mosquitos, and shoving crowds. Bangkok is worth a couple days exploration. Then pack your bags, take a shocking pink cab to the airport, pass under the sign which proclaims “Long Live the King” and seek out the more pleasant cities of the north.