Strap myself in for a bumpy ride! I am in Thailand, land of happy fat Buddhas, slow swaying elephant rides, and speedy drivers who totally trust in Buddha that the guy they are tailgating will not make a sudden stop or change lanes as he passes on a sharp uphill curve. A three hour drive can easily be done in two with our driver. The bumpier, narrower, curvier the road, the zippier he becomes. Obviously laws on using walkie talkies or a cell phone while driving have not reached Thailand.
We depart the Mekong late in the afternoon, pass through Lao Immigration and, after driving across their fancy new bridge over the river, we are processed into Thailand. Then a “Mad Hatters” ride delivers us into the vicinity of The Golden Triangle at Chiang Saen. The differences in this area are noticeable. First off, the bright colored neon lights across the Mekong are the lights of Lao gambling casinos. The opium trade may be big business here, but gambling seems to offer alternatives to everyone else. Clearly this is an affluent region and is attracting visitors from around the world, especially Chinese.

Morning in Chiang Saen begins at the big golden Buddha above the Mekong. He sits in an elaborate boat with life-sized elephant statues upon entry, best observed from a distance for full impact. Built in 2005, maybe to compete with the vibrant casino lights across the river. Its BIG and can probably be seen from at least three countries. Possibly Sarah Palin can see him from Alaska. It’s a nice photo-op with Buddha’s smiling face against the clear-blue morning sky.

A lookout hovers over “The Golden Triangle” and the confluence of the Ruak and Mekong Rivers. The Golden Triangle did not get its name from the big gold Buddha but from the area stretching thousands of square miles and within which opium trade is prevalent among the countries of China, Myanmar, Lao and Thailand – all with the Mekong River in common. Trade was done at the best exchange rate – gold.

Today, most profits end in the hands not of the hill tribes who grow and process the opium, but the state army which is an ally of Myanmar’s military junta. Most of the world’s heroin comes from the Golden Triangle. It is estimated over 170 square miles of opium is under cultivation. Back in the day when Burma was a British colony, the Brits resorted to war rather than loose this lucrative trade. I doubt if the military junta wishes to give up this “gravy train” of riches either.

Standing in Thailand with Myanmar to left, China over the mountains and Lao on right bank of Mekong.

Its a beautiful day in Thailand and I can see all the way to Myanmar. Actually, it’s a short swim across a shallow river. A little further to my right is Lao. Just at the bottom of the hill is my next stop – the Opium Museum.

This museum explains how the poppy is planted, grown, harvested and turned into heroin. Additional exhibits include pipes, weights and measures, and history of the trade. Each poppy flower produces an opium pod which is scored for its fluid called latex. It takes 3000 pods to produce 3.5 pounds of latex, .41 acres to yield 2.2 pounds of raw opium. Most of the tribespeople growing the opium poppy in Myanmar and in the Thai highlands live below the poverty line. One man, Khun Sa, produced 180 tons of the stuff. That’s a lot of poppies – probably too many acres to miss if one looked hard enough. But this is a kill or be killed business and drug warlords run the show.

Khun Sa was a powerful and notorious Burmese warlord and drug dealer known as “the King of the Golden Triangle.” His life can be interpreted either as a fighter for the autonomy of his own ethnic group, or as a warlord of the international illegal drug trade, of which he was one of the world’s largest and most powerful suppliers. Khun Sa had a $2 million bounty on his head and was listed as one of the most wanted men in the world. “If I can get back my country, eight million of my people will rejoice, but if I can stop the narcotic problem then the whole world will rejoice.” When he died in 2007, he still preferred lining his pockets with drug trade profits. 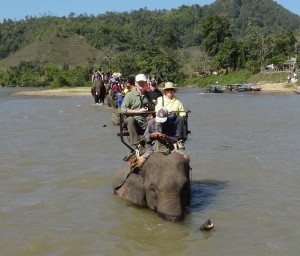 At Ruammit Village or Karen Elephant Village, I meet some quiet Asian elephants who sweetly agree to take us for a walk through the fields of Thailand. Their mahout rides behind the ears and guides the elephant with gentle taps of his feet to the ears. He carries a short bamboo pole with a metal link on a rope which I never saw him use. Our elephant carried two people through the fields, up a steep hill and back down to the Mae Kok River. The elephant seemed to enjoy wading into the water and cooling off. Shuffling upstream, our elephant enters the Karen Village, a small group of homes and businesses centered around their elephants and a few really big snakes. 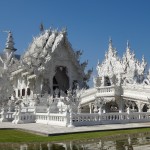 I am mentally challenged in Chiang Rai at the “White Temple” or Wat Rong Khun. To say it is extreme is an understatement; to say it is artistic is being kind; to say it is blinding to the eyesight is because it is all white and covered in mirrors and glass shards reflecting the brilliant sun and blue sky; to say it is beautiful architecture is exaggeration. To say it is a popular tourist attraction is accurate.

Wat Rong Khun is a Buddhist temple of white meringue whipped into peaks. The Wat is an example of contemporary art, unconventional, and privately owned. The original Wat Rong Khun was in a sad state of disrepair when local Chiang Rai artist Chalermchai Kositpipat decided to rebuild the temple with his own money, about 13$ million so far. Kositpipat considers the temple to be an offering to Lord Buddha and believes the project will give him immortal life. The project is ongoing.

The main building, the ubosot, is a glaring, albino building with mirrored glass embedded around the exterior. Though an example of classic Thai architecture with a three-tiered roof, meditative Buddhas and abundant use of Naga serpents, the “classic” ends there. The temple is reached by a bridge of “rebirth” where one dare not pause or tempt being sucked down into temptation and greed by multitudes of reaching hands from Hell.

Inside the temple, my artistic sensibilities are challenged to the max. The decor swiftly moves from brilliant white to the surreal of a bewildering artistic temperament. Murals depict New York’s 9-11, Angry Birds, Hello Kitty, orange flames, demon faces, images of Elvis and Michael Jackson, Neo from The Matrix, T-800 Terminator and Freddy Kruger. Images of nuclear warfare, terrorist attacks, and oil pumps are interspersed with Harry Potter, Superman, and Batman. How a monk sits serenely in the midst of this is beyond my ken. Wat Rong Khun reminds me I need to see contemporary art occasionally to remember I just don’t get it.

The bright golden structure symbolizes how people focus on material possessions. I, like others, take a photo of this ornately decorated building because it is so beautiful. I note it contains the toilets, a sign Kositpipat might have a sense of humor.

No Schwarzenegger just the Predator.

I exit the grounds, blinded by the white. But not so blind as to miss what is emerging from the ground, reaching out for a victim. It is the Predator. I didn’t see Arnold Schwarzenegger

Our afternoon drive is through the mountains and national parks of Thailand to Chiangmai. It is like Disney’s Wild Toad Ride but with lush green scenery.