It really is a lot of fun

My first evening in Chiangmai ends with a pleasant waterside dinner and a unique stop at a fish spa. I put my feet into an aquarium and am immediately attacked by scores of Doctor Fish. These are living exfoliant fish on work visas from Turkey, kind of like a pumice stone with fins. Garra rufa or nibble fish is a species that lives and breeds in the pools of some Turkish river systems and hot springs. For 200 Bhat or around $6, I hire them to nibble off the dead skin from my feet and between my toes. The use of the fish as a spa treatment is widely debated but I think these little nibblers need to get work visas for California.

Wat Doi Suthep, a sacred site of Theravada Buddhism, was built in 1383. At 3500 ft above Chiangmai, it is reached via an incredibly windy road where Buddhist and bus drivers risk life and limb to zoom and pass around curves and over double lines to reach this most sacred site. The complex consists of several holy buildings, beautiful tonal bells of all shapes and sizes given as gifts to the temple, and an extravagant stupa. According to legend, a monk had a dream. In this vision he was told to go to Pang Cha and look for a relic; there he found a bone. Many claim it was Buddha’s shoulder bone. The relic displayed magical powers: it glowed, it was able to vanish, it could move and replicate itself. The replicate part I get for little bits of Buddha seem to be throughout Asia.

King Nu Naone of the Lanna Kingdom heard of the relic and asked the monk to bring it to him. He took the relic to what is now Lamphun, in northern Thailand. Once there, the relic broke into two pieces. One piece was placed by the king on the back of an albino elephant which was released to roam the jungle. The elephant is said to have climbed up Doi Suthep, stopped, trumpeted three times, then dropped dead. This was interpreted as an omen. King Nu Naone ordered the construction of a temple at the site.

The original copper plated chedi, or stupa, is the most holy area of the temple grounds. Aspects of the wat draw from both Buddhism and Hinduism. There is a model of the Emerald Buddha and a statue of the Hindu God Ganesh. Views of Chiangmai might be seen on the far side of the temple, if the haze wasn’t so thick. Stairs, 309 of them, follow the elegant dragon staircase down to the kiosks and hawkers at the bottom of the complex.

A few moments at the Arts & Culture Museum was enough before lunch and a visit of privately owned botanical gardens. Fanciful topiaries range from flocks of flying birds, signs of the Thai zodiac, dolphins to dinosaurs. Hungry ostriches can be fed, so too the Asian deer. A pond for peddling, large gardens of orchids, and other varied plants from around the world grace the tranquil park grounds. A cart whisks you around but better still get a bike or walk. There are also some traditional Thai houses to visit.

After this restful interlude our van zooms off to a local market to meet our Thai cooking instructor, Sampon Nabnian. He walks us through the produce, pointing out the ingredients for our dinner, and explaining not only what these strange green and brown items are but how they are commonly used. We then go to his school to cook our dinner. 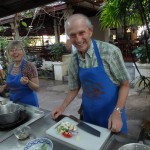 Sampon demonstrates the preparation of each course then I try to cook the dish. It helps to remember what he did with each of those ten items, but Sampon is closeby and an entertaining and jovial teacher. Following his instructions, I prepare a tasty shrimp soup, a curry chicken, delicious pad Thai, and for dessert steamed banana cake. Perhaps with my gift of his cookbook, I will be able to replicate some Thai cuisine once home in California.

A moat and partial brick walls enclose the old city of Chiangmai. I enter through the beautiful Chiangmai Gate. This is a pretty city set against a backdrop of rolling green hills, 300 temples, and much pollution from too many automobiles. Everywhere I look along our route there is a temple or stupa.

The Wat Chedi Luang is a tall, brick stupa (chedi), the greatest one in northern Thailand. Construction of the royal temple started in the 14th century when King Saen Muang Ma planned to bury the ashes of his father there. After 10 years of building, it was still unfinished. It took until the mid-15th century to be completed. It was over 260′ high with a base diameter of 165′, at that time the largest building of all Lanna. In 1468, the Emerald Buddha was installed in a niche there but the 1545 earthquake partially destroyed the stupa, collapsing the top 90 feet. The Emerald Buddha was moved to Luang Prabang. For the 600th anniversary of the chedi, a copy of the Emerald Buddha made from black jade was placed in an eastern niche.

Around the corner is Wat Pan Tao, which means “to increase 1,000 times.” This beautiful wooden temple was built around the same time as Wat Chedi Luang, in the late fourteenth century. It was one of four monastic temples serving Chedi Luang. The temple’s most interesting feature is its wooden wiharn, a chapel for lay people. The teak building was moved to the temple grounds in 1875. It was formerly a royal residence, but the practice in Lanna was for each new king to build a new palace. The old palaces were often recycled into other uses, especially temples. There are numerous peacock carvings, symbols of the kings of Chiangmai.

Wat Phra Singh is a grand monastery in the heart of Chiangmai. Guarded by large Singhs (lions), Phra Singh was begun in 1345 to house the ashes of King Kham Fu. When, in 1367, the statue of Phra Buddha Singh was brought to the temple, the temple complex received its present name. During restoration in 1925, three funerary urns were discovered inside a small chedi, possibly containing royal ashes. The urns have since been misplaced. From 1578 to 1774 the temple was abandoned. It was only in 1782 that it was restored, an ubosot built and the chedi enlarged.

The temple houses an important Buddha statue: the Phra Buddha Singh, supposedly brought from Ceylon (Sri Lanka) and eventually arriving in Chiangmai. There are two more Buddha statues in Thailand which are claimed to be the Phra Buddha Singh, one is in the Bangkok National Museum. It is alleged that the head of this statue was stolen in 1922 and the present statue (or maybe only the head) is a copy.

My travel mates and I hire a red minibus known as a songtaew (named for the two rows of benches in the back of an open covered truck) for our return ride to our hotel. It appears passengers are dropped off in the order of pickup. This is a good thing as I get a fun ride about several areas of the city. Then, I am off to the airport for a short flight to Bangkok. Perhaps I will seek out the Phra Buddha Singh and the rest of his little bits.