It’s Monday so I must be in Lao. Flying into Vientiane, I see the beauty of the land with its rice fields, buffaloes, the Mekong River, trees and green expanses. On the ground, I immediately notice the clean streets, lack of motor scooters (car to scooter ratio is 4:1), traffic lights are obeyed, and several ethnic restaurants from Italian to Korean. I pass many of the 150+ Buddhist temples in the city and what seems like as many automobile dealers. On foot, I no longer need to play dodge-a-scooter. There are sidewalks! Indeed, Vientiane seems a cosmopolitan city and I am enamored of it.

Because the French added the ‘s’ to Lao, I will honor the home country and drop said unwanted letter. Laotians also use the “C” word here as China is an important trade partner and investor. And Laotians have a sense of humor about their “fucking terrible” roads. Which is why we are flying in and boating out of Lao.

Landlocked Lao PDR (Lao People’s Democratic Republic) flies the dual flags of Lao and the hammer and sickle, but our guide admits it is more socialist than communist. “As long as we can work and enjoy our lives we don’t care what the government is.” However, many decisions must take into consideration their neighbors, especially Việt Nam. When forced to chose sides in the American War, Lao joined Việt Nam as they are more closely connected by personal and trade relationships. But this decision also caused Lao to suffer catastrophic American “secret” intervention and bombing.

From 1962 until Lao’s war ended in 1974, US military couldn’t enter Lao overtly, so Air America took on a larger military role (including the cargo of poppies flown out of the country as trade for money and arms flown into Lao). As war escalated, US ground troops were forbidden in country, but the air war increased significantly. North Vietnamese soldiers and supplies streamed southward along the Việt Nam/Laotian border using the Ho Chi Minh Trail, supplying troops in southern Lao. Air America simply called it “the road.” Only a few people had seen it, and those who knew its hazards really did not want to see it. “Trail” did not accurately describe “the road,” which was a network of large roadways that could carry heavy trucks loaded with troops and supplies. So heavily guarded, unarmed aircraft were defenseless. You did not go to “the road” unless you absolutely had to. 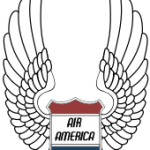 The US government needed military presence in areas where the US military could not go, due to public pressure and treaty constraints. The initial operation was CNRRA Air Transport (CAT), a Chinese company owned by US General Claire Chennault (who had formed the Flying Tigers to aid China) with a Chinese bank as principal investor. CIA devised an elaborate plan wherein CAT could be bought indirectly. The CIA did not own CAT as the CIA does not have any money – it is funded by the Department of Defense. The CIA also does not have a foreign policy; the US government has a foreign policy and uses the CIA as a tool to administer it. Consequently, the CIA could technically operate CAT but never own it. In 1959, CAT changed its name to Air America, whose primary work was supporting the Thais and Hmong in northern Lao, and the Lao military in the south. But the planes and pilots did much more.

This US use of Air America became what is known as “the secret war.” The CIA was involved with the Hmong on the ground. The US government used Air America as military aircraft. The military on the ground may neither have fully understood AA’s involvement nor how fearful the government was about, first, violating the Geneva Accords and, second, the American and international public finding out about their actions in Lao.

Lao, a country slightly larger than the state of Minnesota, has the dubious distinction of being the most bombed country in the history of warfare. According to Lao, from 1963 to 1974, the equivalent of one bomb every eight minutes was dropped on Lao. Two million tons of ordinance was dropped on Lao villages and fields, more than the US dropped on Germany and Japan combined. The most common bombs were rocket-shaped filled with up to 600 smaller bombs filled with ball bearings. When the rocket split open as it fell, these bomblets launched to kill whoever was nearby. In fact, these bombs continue to kill as up to a third failed to explode. It is estimated thirty million bombs lie under Lao rice fields, houses, and roads. In 2001, there were more than 12,000 casualties.

Despite bombing, the Ho Chi Minh Trail continued as a pipeline supplying the south and was a vital instrument in the winning of the war for the communists. Then the war simply stopped for Lao.

Vientiane, the capital of Lao, is an intriguing mix of Lao, Thai, Chinese, Vietnamese, French, US and Soviet influences -a truly cosmopolitan city of tree-lined boulevards and over 150 Buddhist temples. Its population, currently about 800k, is expected to explode in the upcoming years. Foreign investors, mainly China, sees its potential. My tour takes me to temples (Wat) and stupas (That) around the city.

Pha That Luang, the Great Sacred Stupa, is a symbol of both the Buddhist religion and Lao sovereignty. It is a large golden Buddhist stupa and temple complex. The 145′ high Stupa was originally built during the ancient Khmer civilization around the 3rd century when Vientiane was inhabited by the Cham people. Researchers believe the structure was originally a four-sided stone obelisk.

The That or Stupa is found in different shapes and sizes in every monastery in the world, especially in Lao. The Stupa, the symbol of the Cosmos, is comprised of three levels: the base, the body and the spire. The most important thats are shrines to relics of Buddha. That Luang supposedly is the sanctuary of the Buddha’s hair and breast bone. The current Stupa was built over the ancient stupa in the 16th century by King Setthathirath when he moved the capital of the Lane Xang Kingdom from Luang Prabang to Vientiane. This Stupa has since become the symbol of Lao and is revered by all Lao people. 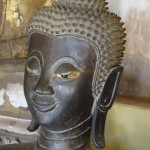 The oldest temple in Vientiane is Wat Si Saket, built in 1818 on the orders of King Anouvong (Setthathirath V.) “Si” is a Sanskrit title of veneration. Wat Si Saket was built in the Siamese style of Buddhist architecture, with a surrounding terrace and an ornate five-tiered roof. This may have kept it safe as the armies of Siam that sacked Vientiane in 1827 used the compound as their headquarters rather than destroying it. Wat Si Saket features a cloister wall with supposedly 10,000 ceramic and silver Buddha images. The interior is stunning with walls covered in beautiful frescos and an ornately carved ceiling.

Ho Phra Keo, from a distance, looks as if carved from wood. It was built about 1556 on the orders of King Setthathirath. The temple housed the Emerald Buddha, which the King had brought from Chiang Mai to Luang Prabang. When Vientiane was seized by Siam (Thailand) in 1778, the Buddha was taken and the temple destroyed. After it was rebuilt by King Annouvong of Vientiane in the 19th century, it was again destroyed by Siamese forces when the King rebelled in an attempt to regain full independence. The revered Buddha now resides in Wat Phra Kaew, Bangkok. The temple was rebuilt for a third time by the French between 1936 and 1942. Today, smiling bronze Buddhas sit amid sounds of chanting monks and crowing roosters.

The Presidential/Royal Palace overlooks the Mekong and is used for dignitaries. If one survives crossing the highway, there is a pleasant walk along the water or in the Chao Anouvong Park. A statue of King Anouvong, arm outstretched, pointing south toward his ancient kingdom of Siam across the Mekong. Vientiane is a walkable city. In fact, it prints the only tourist map I have seen that includes its downtown stop lights, all twelve of them. What’s not to love about a city that retains street names reminiscent of French colonials and favorite kings, such as Rue Setthathirath. 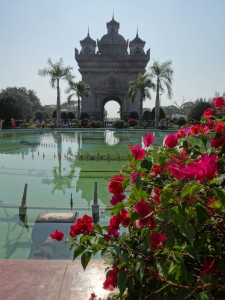 Patuxai Gate commemorates the Lao who died in pre-Revolutionary wars. This Victory Gate or Gate of Triumph was built between 1957 and 1968 and is dedicated to those who fought in the struggle for independence from France. The arched gate resembles the Arc de Triomphe in Paris but is typically Laotian in design, decorated with mythological creatures such as the kinnari (half-female, half-bird) and Garuda.

Our final stop of the day is more contemporary. American Carol Cassidy’s Lao Textiles’ workshop creates 100%  hand-woven silk textiles. She arrived in Lao in 1989 as a textile expert with the United Nations Development Program. Carol and the 40 Lao artisans she employs produce unique wall hangings, scarves, and custom fabrics. Her pieces are displayed in galleries and museums throughout the Unites States. The process is labor-intensive, often for the most complex designs only two centimeters are woven per day.

We dine at a Friends restaurant where youth are trained to work in the restaurant business. I can browse in its small shop that sells wonderful crafts made of recycled material. The food is good but I discover that Lao cuisine has a bit more of a bite. BeerLao cools the palate.

Sitting at the old Vientiane airport, I watch a military propaganda film on their flat-screen 60” Sony and remind myself Lao is a one-party government. This cosmopolitan city has its limitations. I hope their Friendship Bridge, spanning the Mekong to Thailand, lives up to its name for years to come. Lao deserves it.