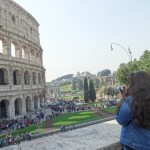 What, me worry? Well, no matter how much I plan, comfort and confidence are relative. Anything can go wrong, or in 21st century speak, TSCHTF, so I do worry. It is always after-the-fact, when all goes well, mostly, that I heave a sigh of relief and know I waste time with worry.

Roma has gone well. The weather has been pleasantly cool, or balmy according to my travel mate Gabrielle. She’s a Minnesota girl where any temp above 50 is balmy. The crowds are a bit daunting, more than I expected. Lines into St. Peter’s were ridiculous, wrapping entirely around the square. This inconvenience is caused by the need to pass through intense security screening. FTT and those who have no respect for this world. Once through security, well over an hour and an entire solar eclipse, it was pleasant walking around the church, appreciating its vastness as the largest church in Christendom, and checking out the well-preserved body of Saint John Paul II.

Roma is churches. Roma is walking, people and life.

We arrived in Roma after a rather harrowing and poor flight from Chicago: cramped space, no free drinks, no sound on the movies, future pilot strike with Lufthansa threatening. I must lead a fortunate life for despite the discomfort, things go well. We make a fast train connection to Termini and walk the short distance to our Hotel Pelliccioni. Thankfully the room is ready so we were able to crash for a couple hours. Then begins our exploration of Roma.

A pleasant afternoon was spent at the San Callisto Catacombs sans the Christians. Returning to the city, two stops include my favorite churches, San Giovanni in Laterano and Santa Maria Maggiore. We enjoyed a dinner and bottle of Vino Bianco before retiring for a well-deserved rest in our room with a balcony overlooking the activity of Via Cavour.

Roma was not built in a day and certainly it cannot be seen in ten times that time. I always enjoy a stop at San Pietro in Vincoli which contains Michelangelo’s statue of Moses. The Colosseo remains impressive as is the Roman Forum. We saw the site of Julius Caesar’s cremation after his ignoble death at the blades of Brutus and friends. Gabrielle, being under the age of 16, was admitted free, something for which one may have to fight. Ticket sellers will never offer, some will play dumb or try to ignore, but ALL under the age of 18 are entitled to free admission to state sites. Shouldn’t be a hassle as this benefit has been official for over a year. 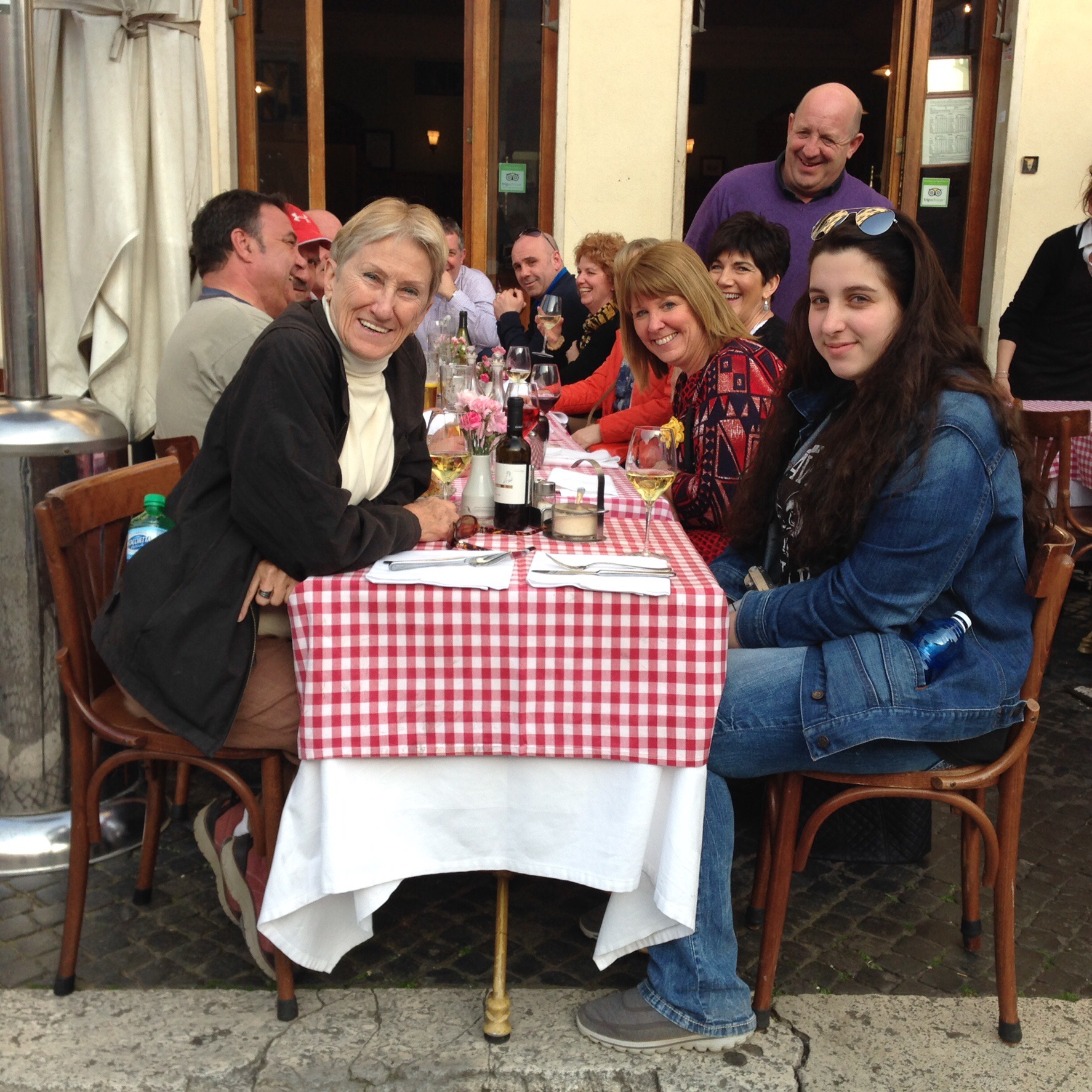 Dinner in the Piazza Navona.

Other sights? We had quite a walking day of over 12 miles. In Roma that means a lot of churches, but also some impressive monuments: elevator up Victor Emmanuel’s ‘birthday cake,’ down Via Corso to the marvelous churches of Saint Ignatius, Saint Minerva with its Michelangelo statue, originally, of a nude Christ, before walking around the Pantheon and  exiting into the lively Piazza Navona for a relaxing dinner. Our evening ended with other Italians on a passeggiata around the Trevi Fountain, under rehabilitation, and the Spanish Steps.

A good start to a new day begins with a visit to the Capuchin Crypt’s imaginative displays of their brothers’ bones and a newly opened museum. It is an easy ride via Metro to Vatican City and the before-mentioned extremely long lines of visitors waiting to pass through metal detectors. Once in, St. Peter’s dwarfs the crowds. We walk through the Museo and Sistine Chapel before exiting to find the lines impossible to negotiate for a trip up the Dome. Instead, it is a twenty minute walk along the Tevere to Trastevere and a relaxing dinner at a local Osteria.

Sunday finds the Pope in town, rain, and cancelled bus routes. We tried to reach Trastevere’s  Porta Portese flea market but because of a 40k run, buses not operating. Two strikes against us so on to Plan B. Visited the National Museum of Modern Art.  Neither of us artistic fangirls. Bus disruptions causing difficulties so just took the metro to the Vatican. A shorter, faster line and went directly to top of Dome, after 300+ steps. Great views. Dinner near Vatican City and the exciting challenge of the Metro through its busiest stations.

I have learned that I had little to fear but fear itself. Gabrielle has mastered Roma traffic and drivers; the crowds, streets, walking the city, and most importantly, the Metro, are taken in stride. It was like a duck to water in adapting to this new environment. She is observant and a quick learner. Many would be intimidated by this city and Gabrielle held her ground. Enjoying Italy will only get easier.

When asked about the day:

It’s a good thing: Capuchin crypts, San Giovanni in Laterano, Pope John Paul on display, ancient Roma from the Colosseo to the Roman Forum, St. Peter’s Dome, and generally the lively street scene and street vendors. All things that make Roma one of the great cities of the world.

Appreciated not so much: Steps. Catacombs “were just holes in the earth” and can’t argue with that.

So it is early morning as we say Ciao to Roma and board the high speed Fracciarossa for Napoli and Pompeii. Hate these early mornings but you do what you got to do. Uneventful leaving Termini, weather is spectacular, trip and connections fast. We walked a couple hours among the ruins, a couple hours at a local cafe and then, after arriving at our hotel in Ercolano, some time at their rather small black sand beach overlooking the Isle of Capri.

Vesuvius looms just five miles away. When asked to decide on an afternoon activity, the choice was “not to climb a mountain.” Can’t fault that choice. She has already conquered quite a mountain.

Our little hotel balcony overlooks Capri, someone’s dog yaps below while we drink a glass of vino bianco. Can’t get much better than this.