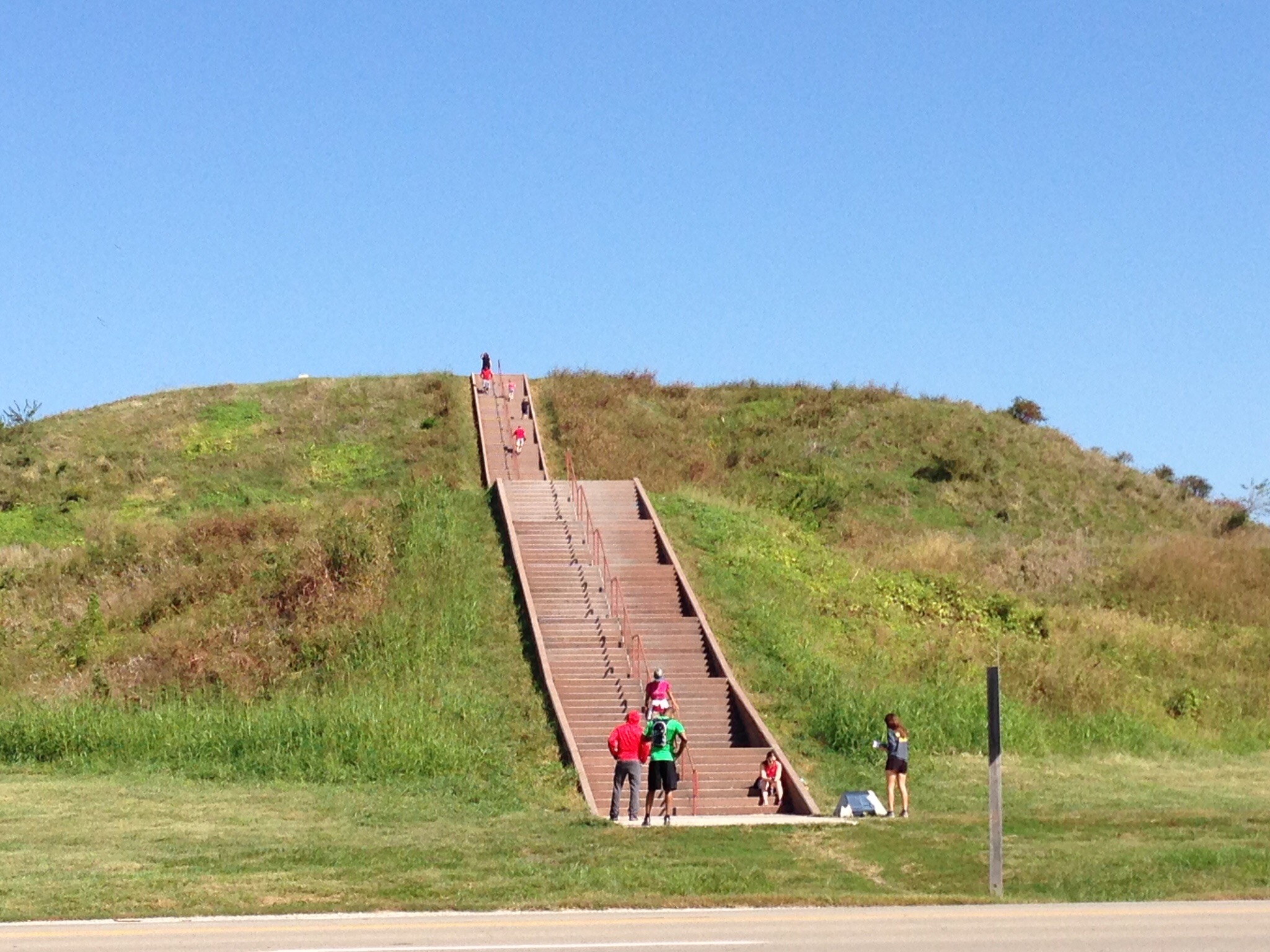 On the eastern and western sides of the great Mississippi River, lay two destinations for today’s exploration. Unfortunately, St. Louis lies between. The city skyline is memorable with its famous Gateway Arch and cable-stayed Stan Musial Veterans Memorial Bridge, the brick facade of Busch Stadium is admirable, the meandering Mississippi and its plethora of bridges is impressive. But all I see are the twists and turns of expressway interchanges, acres of elevated concrete, swarms of cars and trucks, stop and go and sit and wait traffic. The worst of Chicago or LA rush hour has nothing on St. Louis.

In the entire expanse and wonder of the United States, only 23 UNESCO World Heritage Sites exist. My morning stop is one of them: Cahokia Mounds State Historic Site. Cahokia, City of the Sun, was the largest prehistoric earthen construction in the Americas north of Mexico. This Native American city, considered the largest city in America until the late 18th century, once covered over 6 square miles and included about 120 human-made earthen mounds in a wide range of sizes, shapes, and functions.

Cahokia was larger than New York or Philadelphia before the mid-1700s. Over 10,000 indigenous citizens called these mounds home. Tens of thousands more, mostly farmers, lived in the nearby countryside. As a center of ancient society in North America, its citizens changed the course of human history.

Initial occupation occurred during the late Woodland times of AD 700 to 800 and included small settlements along Cahokia Creek. Five suburban sites existed, one in St Louis and four this side (east) of the Mississippi. These expanded and merged during early Mississippian times 800 – 1000 A.D. when the population and community increased, reaching a peak between A.D. 1050 and 1150 with an estimated population of over 20,000. Cahokia was the center of a large chiefdom that had ceremonial and trade connections to other Mississipian sites throughout the Midwest and southeast. Long-distance trade ranged from the Gulf Coast to Atlantic seashells, copper from around Lake Superior, mica from the southern Appalachians, chert and minerals from the Midwest.

It is not clearly understood what brought about the change in population, but a decline began in the 1200s and by 1350 to 1400, Cahokia had been abandoned. Were resources depleted or was there internal social and political unrest? It is thought the residents migrated south where the explorer De Soto was said to have found traces of the civilization. Some researchers feel the descendants of Cahokians might include people in various tribal groups in the Plains and the South today: the Natchez, Seminole, Omaha, Pawnee, Chickasaw, Choctaw, and Osage, among others. Or possibly they migrated west forming the Sioux tribe. One group might have descended from the Cahokian elite, and another from farmers.

The Interpretive Center is excellent and includes excavated objects, a reconstructed village, art and tools. Docents are available for questions. A short informative film introduces the site and the Mounds. Also, there are tree-lined trails for a pleasant walk, large grass plazas, benches and picnic area. Of the original 120 mounds, there are about 80 within the site.

The mounds range in size, shape, height, and purpose. There are three types.

Temple Mounds or platform mounds served as elevated bases for the largest and most important buildings like temples or tribal lodges and homes of Chiefs. At least 35 platform mounds were built throughout the site. Square or rectangular, the smaller platform mound may be just a few feet tall while others are as much as 40 feet or more in height. The most impressive is Monks Mound with a base covering 14 acres and rising more than 100 feet above ground level. It is estimated that over 50 million cubic feet of earth was moved for mound construction over many decades. That’s one gigantic mound of dirt! More than 150 steps lead to its top for magnificent views of the Cahokia site all the way to St. Louis.

Twin Mounds, one platform and one conical and thought to be burial mound

Conical mounds or burial mounds included families and members of a clan and served as grave markers. Often paired with platform mounds, conical mounds were generally smaller, perhaps 20-30 feet in height and up to 100 feet in diameter.

Along the paths are explanations of the mounds, a portion of the stockade that once encircled the city, a 40-acre Grand Plaza, and the Woodhenge. Excavations have uncovered five circular sun calendars called Woodhenges. Each circle was a different diameter and consisted of evenly spaced, tall red cedar posts. Certain posts align with Spring and Fall equinoxes and the Winter and Summer solstices.

This is a fascinating site and the continued excavations and research will tell much about this sophisticated civilization and its influence on Native American cultures. It warrants more than the half dozen visitors that were there. Admission is by donation.

Leaving the peace of Cahokia, I experience a harrowing drive just a few miles to and through the traffic-infested city of St. Louis. I stop for a short time at the St. Louis County Library to research family history. I am sure my ancestor’s 1880 “Gateway to the West” was a far cry from the maze that exists today.

I too finally point my trusty stead West, mostly following Historical Route 66, about 75 miles to the family homestead area of my three times great grandfather around Cuba/Steelville MO. Numerous billboards dot the highway, at least 80 of which advertise Meramec Caverns. I haven’t seen such advertising since my days of reading the Burma-Shave signs along the road. This abundance of signage should serve as a warning. Instead, I decide to check Meramec out. 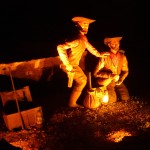 Opened as a tourist attraction in 1933 by owner Lester Dill, the caverns include five levels of caves in over 26 miles of underground passages. Surrounding the area is a plethora of zip lining, camping, sluice mining, fudge sales, t-shirt and souvenir shoppes, canoeing, and riverboat rides – a true example of an early Americana tourist wet-dream.

The caves were carved over centuries by water and consists or a series of rooms and fantastical mineral formations from stalactites, stalagmites, draperies and dripping ceilings. Meramec is considered a living cave because the formations continue to develop, the dripping water producing its magic over the eons. Mineral deposits such as the Stage Curtain, mother-in-law’s tongue, jungle room, mirror river and Wine Table are meant to fascinate. 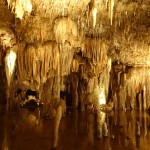 Living formations of the caverns

During an hour-long tour, the history of the cave is stressed. It includes being used during the Civil War as a federal powder mill which Confederates, including Jesse James, blew up. Jesse James is possibly the cavern’s most famous resident. After an 1874 train robbery, Jesse and his gang were tracked to the caverns by a posse, but Jesse was able to escape using an unknown ‘back door’ after three days siege. Hollywood came to visit several times. Art Linkletter filmed a segment of his TV show in what was to become the “honeymoon suite.” An episode of Lassie was filmed with Lassie rescuing a lost Timmy from the dark caverns.

Overall the caverns are wonderfully cool – a consistent temperature of about 60°. However, they are dark with a minimum of lighting. Accents of colored lights are sometimes used but most times the only thing I see is where the guide is pointing his flashlight. Often that is into my eyes. I think the rule is “keep the flashlight moving so as to maintain some mystery.” 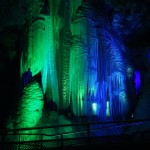 The Stage Curtain is probably the most extraordinary mineral deposit in the cave. It measures 70′ high, 63′ wide and 35′ thick. Kate Smith supposedly sang God Bless America here. Today, the curtain makes a colorful backdrop for a incredibly campy slide, music and colored light presentation at the finale of the cave tour.

There are many other cave excursions in this part of “cave country.” I suspect all are equally commercialized and stretching history to ‘economically wise’ limits. But caves are interesting, the geology is fascinating as all caves are not alike, and a cave will give you a break from the heat.

Meramec Caverns tour is $21 plus tax, a questionable expense for a mediocre tourist site. But then it is air-conditioned, I can buy a piece of fudge, and I get to stumble around in the mysterious dark.

It would make any carny proud.