“God Bless America,” the British Immigration Officer says to me at the border. If it were not for him, the generous bus driver who drove us down The Rock without a ticket, or the monkeys, I might have developed a dislike for Gibraltar. The maze of streets in this densely populated city; lack of signage and closed unmarked trails; grabby monkeys; narrow winding roads; and a real lack of people to ask directions once in the nature reserve really tried my patience. Well, there were lots of monkeys, but they weren’t talking.

The approach to the border between La Linea Spain and Gibraltar is stop and crawl for a mile or more on a good day, which is ill-planned as I must sit in this line in order to reach the parking at the border crossing. However, this newly opened parking lot is convenient for walking across to this territory of Great Britain. Security is heavy but the crossing takes just minutes as each country checks passports. A short walk across the runways of their international airport, a bus through the winding streets and stone Casement Gates, cable car to the top, and voilá, we are among the planet of the apes. 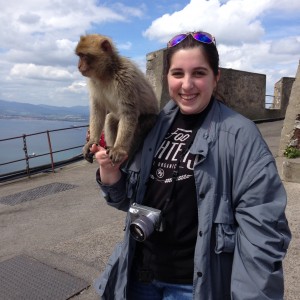 Gabrielle and young friend checking out the hand

Gibraltar’s Barbary macaques are the only wild monkey population on the European continent. Given tourist support, it’s thriving. What they don’t beg, they steal. Expect your coat, umbrella or hat up a tree if left unattended. These “apes” also are excellent interpreters of sign language. Put your hand in your pocket for instant attention. Or as Gabrielle discovered, put your hand out with even “pretend food” and you may have a monkey on your back.

All Gibraltar Barbary macaques are descended from North African populations of Barbary macaques and have lived on the Rock of Gibraltar long before Gibraltar was captured by the British in 1704. The original introduction of the macaques was most likely done by the Moors, who kept them as pets. Full grown monkeys look to weigh upwards of 30 pounds! A popular belief holds that as long as Barbary macaques exist on Gibraltar, the territory will remain under British rule. In 1942, after the population dwindled to just a seven monkeys, Sir Winston Churchill, then Prime Minister, ordered their numbers be replenished immediately. To this day, great care is taken to keep the population healthy and in “joint tenancy” with the Brits. DNA evidence has established that the present population of over 300 are of relatively recent Algerian and Moroccan origin. Rule Britannia!

With the price of a full ticket, we ride up in the cable car, be molested by monkeys, and get lost and wander around the trails until a monkey gets you or you stumble upon the long road to The Siege Tunnels.

The views from atop The Rock stretch across the Strait of Gibraltar to the Atlas Mountains in Morocco. It is a beautiful, sunny day and views are spectacular. Looking down into the tightly packed town is not so nice. Beneath The Rock is a densely populated city area, home to over 30,000 Gibraltarians and other nationalities.

Lacking signage and confusing directions of a map, most visitors seem to be stumbling around looking for an exit. The monkeys know the way but aren’t talking. They know trapped visitors mean a trapped audience and food, shinny things, coats, whatever is loose. Reach for something and monkeys take notice!

Beyond Planet of the Apes

An Anglo-Dutch force captured Gibraltar from Spain in 1704 during the War of Spanish Succession on behalf of the Habsburg pretender, Archduke Charles of Austria, in his quest of the Spanish throne. The territory was subsequently ceded to Britain “in perpetuity” under the 1713 Treaty of Utrecht. Gibraltar continues to be a major point of contention between Britain and Spain. Spain feels Britain broke the Treaty of Utrecht and therefore should forfeit the territory. Gibraltarians overwhelmingly reject proposals for Spanish sovereignty.

Repeated efforts to regain Gibraltar have failed, both with The Great Siege of 1779 to 1783, lasting 3 years, 7 months and 12 days, and Franco’s attempts to negotiate its return in return for Allied support in WWII. Germany offered to take the rock if allowed to cross Spain but Franco was reluctant to allow German armies onto Spanish soil; he asked Hitler to supply the weapons but perhaps suspected if allowed to come, the Germans would be even harder to expel. So, the Brits and monkeys remained.

During World War II , Gibraltar was an important navy base as it controlled the Mediterranean entrance and exit of the Strait of Gibraltar, which is only eight miles wide at this point. Today, Gibraltar’s economy is based largely on tourism, online gambling, banking, and shipping. And of course the monkeys. Improvements to port and fortifications have been made over the years. Spain occasionally has closed their border but nothing has dislodged either the Brits or the monkeys. A member of United Nations since 1946, Gibraltarians have full British citizenship and is part of the European Union.

Though one can walk to (if one can find a monkey to point the direction), St Michael’s Cave or what remains of a Moorish Castle, the highlight of the Upper Rock Nature Reserve is The Great Siege Tunnels and exhibitions. 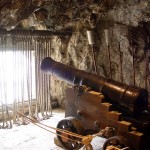 The Siege Tunnels are the series of tunnels inside the northern end of The Rock They were dug out from the solid limestone by the British during The Great Siege of Gibraltar at the end of the 18th century. This was an attempt by France and Spain to capture Gibraltar from Great Britain. It was the fourteenth and final siege lasting from July 1779 to February 1783. During the siege, British and Spanish forces faced each other across a half-mile stretch of marshy open ground that forms a disputed isthmus to the north of The Rock. The British could block access to the city and the western side of the island, and the eastern side of the island was steep and inaccessible. So guns were placed in a series of batteries on the north face, providing overlapping fields of fire if attacked.

Construction of the tunnels arose from the garrison’s need to cover a blind angle on the north-east side of The Rock. The only solution was a gun mounted on a high spur of rock known as The Notch. There was no possibility of building a path due to the vertical cliff face, so the suggestion was made to dig a tunnel. Digging began on 25 May 1782.

Construction was carried out by hand, mainly using sledgehammers and crowbars. The work was slow, taking thirteen men five weeks to dig a tunnel with a width of 8 feet and a length of 82 feet. Some ceilings are low but there are also larger areas for gun placements. By 1790 around 4,000 feet of tunnels had been constructed. Eventually, there would be over 30 miles of tunnels inside The Rock.

World War Two led to further tunneling as work was undertaken to enable The Rock to house a garrison of 16,000 men with water, food, ammunition and fuel supplies sufficient to last a year under siege. The Great Siege Tunnels were extended in two directions during the war, with a long straight extension called the Holyland Tunnel continuing through to the east side of The Rock, so named because it points in the direction of Jerusalem, and a staircase dug to link the tunnels with other Second World War tunnels lower down, known as the Middle Galleries.

Walking through these tunnels, there are several gun placements, placards of explanations, terrific views, but no monkeys. From here, it is a walk back to the lower cable car but everyone recommends walking down. However, returning to town center is a long walk and almost all downhill. Buses run but unless you find a kind driver as we did, you need a ticket before boarding. My recommendation is to cross the border, take a bus to the cable car, and deal with one of the many taxis at the border or cable car entrance. They will drive you around the top of The Rock and back to the border or the main square for a nice lunch.

Drivers also will introduce you to the monkeys.