Granada, land of dreams for me
My song becomes gypsy-like
When it is for you.

My song made of fantasy
My song a melancholy flower
That I come to give to you.

We collect our car and head south to Andalusia, Spain’s rocky, sun-baked southern coastal region Here is embodied much of what one thinks of as Spanish: tapas, matadors and music. Yet it was under Moorish rule from the 8th-15th centuries, a history that shows in its architecture, including such cities as Seville and Córdoba, and Granada’s Alhambra palace, our destination for today.

Roads are good and driving is easy using God’s Positioning System and Gabrielle’s navigating skills. Google Maps is working perfectly offline, even redrawing directions when necessary. Outside Madrid are the arid hills, endless rows of olive trees marching to the mountain tops, and modern day Quixote windmills. Driving over passes of 500 meters, we see snow on the highest peaks of the Sierra Nevada range.

After the tiny room in Madrid where we had to sit sidewise on the toilet, by comparison our room at the Hotel Don Juan is spacious and comfortable. We check in and immediately walk downtown. There are three sites not to miss in Granada.

The Royal Chapel was ordered by the Catholic Monarchs in 1504 as a place of burial for their bodies. If nothing else, I must pilgrimage to this site as here rests Fernando and Queen Isabel, dispatchers of Moors and Cristóbal Colón. Also, the Granada Cathedral is magnificent with ceilings of intricate stone carvings. It’s a huge church and the exterior is as impressive as the interior. Construction of this cathedral had to await the acquisition of the Nasrid kingdom of Granada from its Muslim rulers in 1492 then took 181 years to be built. Design is less Gothic and more Spanish Renaissance with soaring delicate Corinthian columns and capitals.

But the third destination is the purpose for our stop in Granada – The Alhambra. 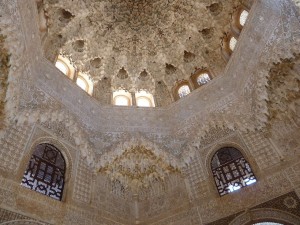 The Alhambra is both a fortress and palace and was built between the 13th and 14th centuries as the crown jewel of the Emirate of Granada, whose territories stretched from Córdoba, Sevilla, Jaén, Murcia and Cádiz, to the whole of Almería, Málaga and Granada. In other words, a large part of southern Spain. This late Islamic palace was built for the Muslim emirs during the last of the Nasrid dynasty.

The Alhambra became a Christian court in 1492 when the Catholic Monarchs (Fernando and Isabel) conquered the city of Granada and took the palace as their own. Even though Emperor Charles V lived in the palace and constructed a palace of his own and altered some areas, the Alhambra remains distinctly Moorish.

The decoration consists of Arabic inscriptions that are manipulated into geometric patterns in an arabesque setting. Painted tiles decorate walls. Much of the architectural ornament is carved stucco, not stone. The palace is designed in the unique Spanish Mudéjar style, and characteristically uses western elements to reinterpreted Islamic forms, a style popular during the Reconquista, (the reconquest of the Iberian Peninsula from the Muslims by the Catholic Monarchs Fernando and Isabel).

The palace complex, gardens of the Generalife, numerous fountains and columned arcades create a maze for wandering. The exterior is left plain and austere but sun and breezes flow freely amid the numerous highly decorated rooms. Blue, red, and a golden yellow, all somewhat faded from time and exposure, decorate the ceilings and walls. Unique are the stilted arches and stalactite ceiling decorations, somewhat like delicate lace draperies.

The complex is huge and a maze that lacks decent signage. There is an app available and I suggest downloading it before you visit. One could easily spend most of the day wandering the grounds and enjoying the magnificent views. The actual time in the palace is limited to one walk-through though you may do this at your own pace, albeit fighting the hoards. Definitely buy your tickets online ahead of your visit and you may choose when you want to enter the Nasrid Palace.

The palace itself is crowded but the gardens are a refuge of fountains with running water, reflecting pools, wildflowers, roses, oranges, and trees. Birds and tired travelers rest along the benches.

Upon our return to the city, our bus is halted by police barricades and masses of people. We are engulfed by crowds, the sounds of drums, and the tramping of feet. It is our first exposure to the spectacle of Semana Santa, Holy Week in Spain. Semana Santa is BIG in the cities of Andalusia. During Easter week Catholics celebrate the period with various ceremonies, masses and processions. Festivities begin on Palm Sunday and continue though Easter Weekend. We knew to expect the processions but totally unprepared for the magnitude and beauty of the festivities.

In Granada there are more than 30 Catholic brotherhoods that organize processions for Semana Santa. These processions, dating back to the 13th century, are known for the simplicity and beauty of its “pasos” (floats of thrones with religious icons, highly decorated in gold and silver and weighing over a ton) and also for the unique surroundings of the processions. During Holy Week in Granada, thirty-two processions take place on the streets leading to the Cathedral, where all make the Station of Penitence before they make their way back to their home churches. And NO, these processions are NOT anywhere close to the American enigma of the KKK.

The processions of cofradias or church brotherhoods, known as stations of penance, travel from their home church to the Cathedral and back. This can be a winding route of 3 miles or more.

The standard structure of a procession is:

A great cross (the Guiding Cross) is carried at the beginning of each procession.

A large number of Nazarenos follow, sometimes barefoot, dressed in a habit and some with a flowing cloak, all with the distinctive high pointed hood (capirote) reaching to the heavens and used to conceal the face. Some may carry shackles and chains on their feet as penance. The exact details and colors of their robes (white, purples, blues) and forms of these robes are distinctive for each brotherhood. Processional candles or rough-hewn wooden crosses are carried. Some participants wear dress or headdresses inspired by the uniforms of the Roman Legion. Holding long wax candles (only lit by night), they marching in silence. Children rush up and collect the dripping wax into balls of wax. Usually the Nazarenos, a variety of ages, march in pairs and are grouped behind insignia. Moving between the lines are guardians who keep the formations organized.

A group of altar boys, acolytes dressed in vestments (many of them wearing long wide-sleeved tunics) with chandeliers and incense, and other servants follow.

The Paso is the centre of each procession and consists of life-sized images or scenes atop a moveable float of about 12’X35′ These sculpted scenes represent the Passion, allegorical scenes, images of Christ or of the Virgin Mary. All are richly carved and decorated with fabric, silver, flowers and candles and covered by an ornate canopy. Beneath the paso, with only their feet showing, are scores of men called costaleros who bear its weight upon their shoulders. There may be openings in the skirt which surrounds the paso and shields them from sight, but as a whole they take direction from a leader from outside. They step in unison, giving the paso a unique swaying gait as they inch along the route, sitting their heavy burden down every few yards, hefting it upon their shoulders as one to continue their procession – slowly, swaying, almost giving the scene life as it moves down the street.

Bands follow, mallets pounding numerous bass drums with lines of drummers beating the cadence for the paso. Other bands of brass instruments play chapel music or slow dirges to accentuate the drama of the passing scene.

A number of penitentes, carrying wooden crosses, make public penance. They wear the habit and the hood of the brotherhood, but the hood is not pointed. Faces are covered, some feet are bare.

A procession can consist of several pasos and can be made up from a few hundred to near 3,000 Nazarenos and last anywhere from 4 to 14 hours, depending how far the home church is from the Cathedral. The largest procession can take over an hour and a half to cross one particular spot or corner. Streets are lined with spectators every inch of the way.

Even if you are not religious, it is difficult not to be moved, the atmosphere is so vital and poignant. Drums booming, dirges reverberating off walls and within your chest, announce the approach of the paso. Penitents, young children, and massive floats born on the backs of the devout. The costaleros rest, are given water, then on command heft their burden onto their shoulders to the applause of the people. The life-sized images sway past, almost as if alive, slowly returning to the sanctuary of their church. Throughout the city, throughout the night, the processions are repeated, the drums boom. It is impossible not to be impressed.