Our drive from Málaga along the Mediterranean Coast Highway is clear and smooth as we zip our little Volkswagen Polo around and through the Sierra Nevadas. This is Spain as I imagine: brown, open and arid land, hills and mountain ranges in the distance. These provinces of Andalucia contain the highest point of continental Spain, 11,411 ft above sea level. And the sparkling, azure Mediterranean is along our right. There are multitudes of olive trees, oranges, and low hot houses as far as we can see.

Our modern Ibis Valencia Hotel concierge told us everyone has left town for the weekend, encouraging us to just drive the few miles into the city. That most locals have left seems obvious as we maneuver deserted streets and easily park the car around the Plaza de Toros. Totally different experience from our last few days.

We walk past Valencia’s colorful North train station to Mercado Central. The vegetable market is closed today so we stroll among the numerous kiosks of goods set up around the area. Also on this street is the beautiful La Lonja de la Seda, the silk exchange building and UNESCO site. I I am constantly looking up to appreciate the architecture, balconies and art work of the building of Spain.

Each day brings us a new quest. Today, it is for the Holy Grail. 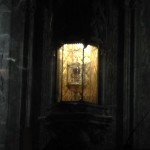 Archaeological facts, testimonies of tradition and documents support the theory that the cup held by Jesus and sought by Indiana Jones and Tom Hanks, is the Holy Grail which resides in the Valencia Cathedral.

The Holy Chalice of Valencia arouses both belief and scepticism. We are encouraged to feel captivated by the beauty of the Grail, its “perfect and exceptional shape,” with its details in gold, pearls and other precious gems. As a visitor, I come with a mind full of legends and Hollywood films.

Is this really the Holy Grail of the Last Supper? Why is it in Valencia? I knew where to visit the Shroud of Turin but thought the cup was in a cave somewhere. Alas, too many adventure movies filling out my religious training.

Within a small chapel in Valencia Cathedral, behind barricades and glass, bathed in warm golden light is the Holy Grail. It’s small, much more than arms’ length away, and free to visit. Plus, no restrictions on photos. Unbelievable!

The actual relic is the upper part, which is a cup of dark brown agate finely polished and believed to have an oriental origin around 100 – 50 BC. The handles came later as well as the chalice’s stem made of engraved gold. Its alabaster base of Arabic writing and Islamic art is different from the vessel. All of it, together with the jewels decorating the stem belong to the medieval period. It is 6.69” high and 3.5″ wide, and the elliptical base measures 5.7″ x 3.8″.

During the Muslim invasion, since 713 AD, the chalice was hidden in the Pyrenees region, after having been in various cities and a monastery, where an 11th century document refers to a precious chalice made of stone.

Then in 1399 the relic was handed over to Martin “The Human” King of Aragon, who kept it in the Aljaferia Royal Palace of Zaragoza and then in the Royal Palace of Barcelona in 1410 when he died. Around 1424, King Alfonso the Magnanimous handed over the royal relic to the Valencia Palace and it eventually was given with the rest of the royal relics to the Valencia Cathedral in 1437.

The chalice has moved around depending upon the events of the time, be it to protect it from Napoleonic invaders or during wars. In 1916, it was finally housed in the old Holy Chalice Chapel of Valencia Cathedral. The continual public exhibition of the sacred relic resulted in a world-wide knowledge of its existence, since there was little information about it while it was kept in the reliquary of the Cathedral. But perhaps it location is still relatively unknown, because Indy was looking in a cave.

If I try to find how the Holy Grail found its way to Spain in the first place, history gets muddled. In Spain alone there are 200 supposed holy grails, some very ornate (I don’t see golden goblets with precious stones adorning the tableware of the Last Supper), a few simple cups and bowls.

Regardless, we came, we saw, we were satisfied during this Semana Santa.

According to tradition, Valencia’s Maritime Holy Week arose in the 15th century. It has no processional ﬂoats like those in Andalusia. However, its ceremonies make it unique. There is one day set aside for each brotherhood to walk in procession with their image, which is moved to the home of the member whose lucky name has been drawn. A peculiar tradition is the trencà perols where at midnight on Easter Saturday, people throw old pots and tableware and water from their windows and balconies. None of this excitement was witnesses, as indeed Valencia was quiet. In fact, the biggest excitement we witnessed were the 20 some cars waiting in que to enter the drive-thru at Burger King. 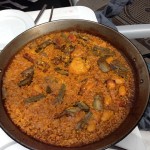 For a relaxing afternoon lunch, overlooking the main square and cathedral, we dine on traditional Valencian Paella. Skip the seafood paella popular elsewhere in Spain, Valencia is the birthplace of its own version that includes rabbit, chicken, huge lima beans, and saffron. Delicious. With a huge iron skillet of paella comes salad, a platter of fried fish and calamari, drink and dessert. More food than one can eat.

Valencia also has the app UrbanStep for bus transportation. However, once in city center, there is little reason not to walk as most things are close to the main plaza. The furthest walk would be to wonder for miles long the central park strip where one finds museums, gardens, Bioparc zoo, the Oceanogràfic sans turtles but showcasing some very zippy Gentoo penguins, and endless paths to bike or wander. We chose time walking around the penguins and sea lions.

Then it was back to the Hotel Ibis with the giant IKEA across the way. We decided to see what the draw was for Burger King. Why would someone idle in line for at least 20 cars and 30 minutes for a 7€ hamburger? Truthfully, we still don’t know.