Our “driver” brought Little Polo around and points us in the right direction to exit Segovia. We almost drove to the hotel but those sharp turns, driving left to get right, one ways, and narrow streets that look like an alley waiting to rip a mirror off, cause the bravest driver to just park the damn car, walk to the hotel and get a driver to maneuver the maze and park the car. Leaving town seems so much more direct. We are off in light rain and drive the short distance into the Sierra de Guadarrama to The Valley of the Fallen. 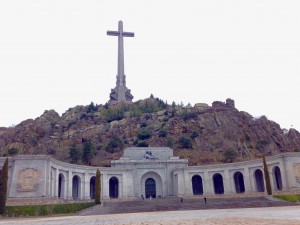 The Valle de los Caídos is a Catholic basilica and memorial built in the monumental style of over exuberant short generals. To honor those who “fell” in the Spanish Civil War, General Franco conceived the monument as a “national act of atonement” and reconciliation. I’m not sure how much reconciliation occurred as the memorial is criticized because convict labor and Republican political prisoners were used, the monument pushes the idea of political neutrality, and Franco is the only person interred in the Valley who did not die in the Civil War.

The classic “monumental” style of the complex smacks of other friends of Franco, namely Hitler’s architect Albert Speer, Cuba’s monuments to Che, and Mussolini’s efforts at building BIG, his Milan train station comes to mind. The monument covers over 3,360 acres of beautiful woodlands and granite boulders on the Sierra de Guadarrama hills, more than 3,000′ above sea level. The complex includes Santa Cruz Basilica, a Benedictine abbey, and the Valley. But the most prominent feature is the 500′ cross towering over a granite outcrop 150 meters above the basilica and visible for miles. On the other side of the mountain is a large abbey housing priests who say perpetual Masses for the repose of the fallen of the Spanish Civil War.

Work started in 1940 and took over eighteen years to complete what is one of the world’s largest basilicas and the world’s tallest memorial cross. The overall dimensions of the underground basilica are larger than those of Rome’s St. Peter’s. The monument consists of a huge esplanade with spectacular views of the valley and the outskirts of Madrid in the distance. A long vaulted crypt was tunneled out of solid granite into the mountain to the massive transept, which lies exactly below the cross.

On the basilica’s facade and its massive wrought-iron gates inside, Franco’s Habsburg-like eagle and symbolic Pillars of Hercules is prominently displayed. Large metal Art Deco statues of angels holding swords adorn the walls and a long, long barrel tunnel leads to the apse. For a man who never intended to be buried here, looks can be very deceiving. 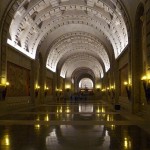 Long tunnel to the apse

The valley that contains the monument is preserved as a beautiful and inviting national park. Beneath the valley floor lie the remains of 40,000 people, whose names are accounted for in the monument’s register. The valley contains both Nationalist and Republican graves. However, the only sign I saw that this was a monument for the fallen victims were a couple engravings above doors “In memory of the fallen” and dates of the Civil War. I see no stone, cross or name to pay my respect to other than its two famous internments.

In 1975, after Franco’s death, the site was designated by the interim Government as his burial place. According to his family, Franco did not want to be buried in the Valley. Unlike the fallen of the Civil War who were laid to rest in the valley exterior to the basilica, Franco was buried inside the church. His grave is marked by a simple tombstone.

Franco was the second person interred in the Santa Cruz basilica. Franco had earlier interred José Antonio Primo de Rivers, the founder of the Falange, who was executed by the Republican government in 1936. Ironically, both de Rivera and Franco died 20 November 39 years apart, so that day is commemorated by Francophiles and Falangists annually. The controversy continues but moving Franco’s tomb is unlikely.

During construction of the site, the motto used by the Spanish Nationalist government was “el trabajo enoblece” or “Work ennobles”, a phrase unpleasantly similar to “Arbeit macht frei” or “Work will set you free”. One Catalan politician likened it to “what was in reality something like a Nazi concentration camp.”

Interestingly, the socialist Spanish government of 2004-2011 instituted a state-wide policy of removal of Francoist symbols from public buildings and spaces, leading to an uneasy relationship with a monument that is the most visible legacy from Franco’s rule. Political rallies in celebration of the former dictator are banned. These acts explain the total lack of statues, flags, memorials, or mention of General Francisco Franco, the Caudillo of Spain 1939-1975

From the Valley of the Fallen is a drive of perhaps 10 miles to El Escorial. Today, it is an easy drive to the Hotel de Martin on Constitution Square. Our little Polo manages the streets and the expert Gabrielle Positioning System gets us to our hotel and public parking, both roomy spots. Our balcony overlooks the domes and roof of our second destination of the day: The Royal Site of San Lorenzo de El Escorial. 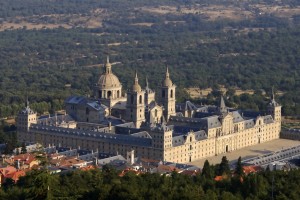 San Lorenzo de El Escorial was the residence of the Kings of Spain. It consists of the royal monastery beneath our balcony and a royal hunting lodge and monastic retreat about four miles away. During the 16th and 17th centuries, it was here that the Spanish monarchy and the Roman Catholic religion truly met in one place as El Escorial was, at once, a monastery and a Spanish royal palace.

Philip II devoted much of his 42-year reign (1556–1598) and tons of the gold flooding in from the New World in his efforts to stopping the Protestant Reformation from reaching his kingdom. For his royal palace he chose to build at El Escorial beneath Mt. Abantos in the Sierra de Guadarrama mountains, 30 miles northwest of Madrid.

Surrounded by cold, very rocky and wind swept plains, it was an unusual choice for a pre-centrally heated palace. King Philip ordained the building of a grand complex here to commemorate a 1557 Spanish battle victory against Henry II, king of France. He also meant El Escorial to be a necropolis for the interment of the remains of his parents, himself, and his descendants. Philip envisioned El Escorial as a center for studies in aid of the Counter Reformation.

The building began in 1563 and lasted 21 years. The gray granite and somewhat austere fortress-like complex is a gigantic 734’x500′ quadrangle, consisting of a royal monastery, Basilica, palace rooms, Biblioteca, patios, Palacio of Los Austrias, and lots of crypts. The Panteón of Kings and 9 chambers for crypts house the wives, cousins, princes, princesses and all people relatives to the Kings. The father and mother of the former king Juan Carlos I lie at a prepared place called a pudridero, or decaying chamber, awaiting interment in the Pantheon of the Kings. With the interment of these remains, all the sepulchers in the pantheon will be filled. 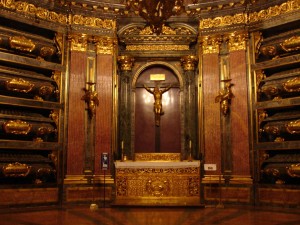 Pantheon of the Kings

The ornate Baroque mausoleum of polished Toledo marble and gold-plated bronze is a Who’s Who of Spanish royalty as all Spanish monarchs of the last five centuries since Charles I have been interred here with the exception of Philip V, Ferdinand VI, and Amadeus of Savoy. (Fernando and Isabel are at Granada.) be they Boubons or Habsburg, including the tomb of the Holy Roman Emperor Charles V (who ruled Spain as King Charles I). The Kings’ sarcaphogi are bronze and marble while the lesser relatives like the bodies of the queens who did not have a crowned succession and the princes and princesses were laid to rest in simpler stone sarcaphogi.

The route of visit takes us through intersecting passageways, courtyards and various chambers of the basilica, rooms of the King and Queen, Palace of the Austrians, crypts and Iibrary.

Philip’s instructions to his architect were simple and clear, directing they produce “simplicity in the construction, severity in the whole, nobility without arrogance, majesty without ostentation.”

However, what strikes me as extraordinary are the decorations, especially the tapestries lining ever inch of the private rooms, bedrooms, and sitting rooms of the King and Queen. I understanding the King’s desire for a Hall of Battles containing frescos of his military victories. These include a medieval victory over the Moors, as well as several of Philip’s campaigns against the French. However, lining the rooms of Philip II and of the Infanta Isabel Clara Eugenia are tapestries of violence, debauchery, and near pornography. When I walk through these rooms, I have to wonder about the Queen’s nighttime reflections.

The most highly decorated part of the church is the area surrounding the high altar. Behind the altar is a three-tiered altar screen made of red granite and jasper, almost 100′ tall, adorned with gilded bronze statuary, religious paintings commissioned by Philip II, and gilded life-size bronzes of the family of Charles and Philip. To decorate the alter screens, the king’s preferences were Michelangelo or Titan, but both were already more than eighty years old and in frail health. Consequently, Philip settled on lesser European artists of the time.

Perhaps of note, all wood used in El Escorial comes from the old forests of Sagua La Grande along the Golden Coast of Cuba. The extraordinary Biblioteca includes many important illuminated manuscripts. And the sculpted gardens and vistas are inviting if not rainy or blustery. All in all, this UNESCO site is worth some time and examination.

The small town of El Escorial was totally dead on Sunday night. A hot cup of chocolate with churros was perfect after the cold of the palace. Rain and cold prevented hanging out in the plaza so the next best thing was visiting the tapa bars. We ate at the El Patio where seafood paella and sangria was enjoyed as our Farewell España dinner.

And farewell it is. We drive the short distance to the airport in the morning, return our little Polo, enter through security and slowly readjust to our daily schedules. We take many fond memories, fun and interesting experiences, and new discoveries. Our drive has taken us almost 1840 miles through the history, ceremonies and foods of España. Now our plane will take us home to rest up for future travels.