“Hate at first sight. If there is a thing as love at first sight, then Frankfort is at the opposite extreme. Left peaceful Heidelberg for dust, strip joints, and drug addicts. Got my mail at AmEx and got on next train out of town to Mainz .” 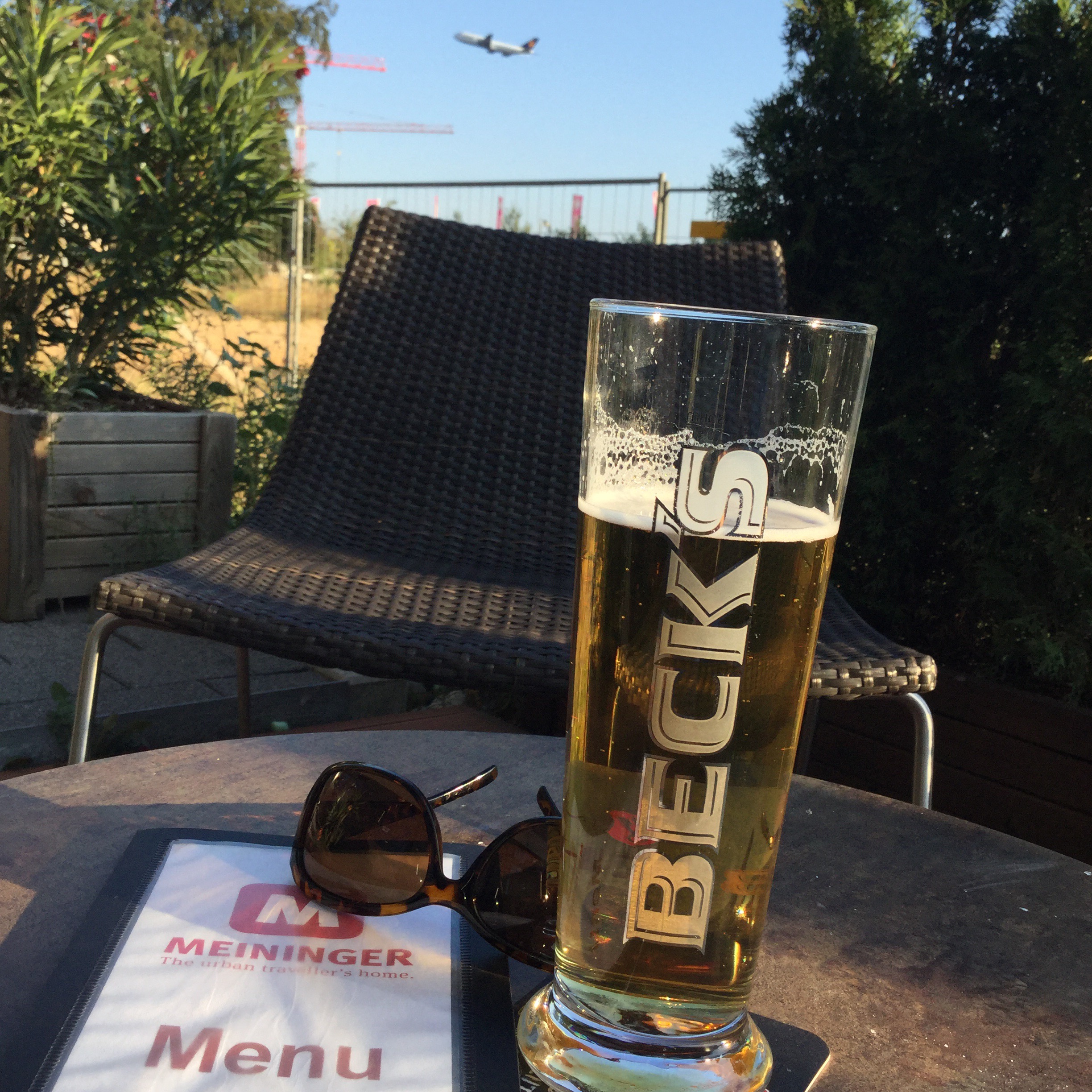 These were my words in the summer of 1972 after 50 days of travel and what must have been a tough night. I remember I went straight to the AmEx office, picked up my mail, got some cash and boarded the next train out of town. Flying through Frankfurt in 2016, I decided it was time I revisited this city. I am extremely glad I did.

My goals for my day are to participate in a “Frankfurt on Foot” walking tour, replenish my supply of Euros, and have a typical German dinner and beer. The day is spectacular, sunny and warm. There are lots of tourists even in late September, but overall the day is perfect.

I chose to stay at a hotel near the airport so must take the hotel shuttle to the terminal, go downstairs to the train station, and purchase a 4.65€ ticket for the S-Bahn into old town. There, on the corner by the Binding Schirn Cafe, I meet Greg, who will be my guide for a 5-mile walk about Frankfurt’s Altstadt. In the background, it seems every church bell in the city is peeling and tolling; it’s Sunday and Frankfurters take the religious holiday seriously. 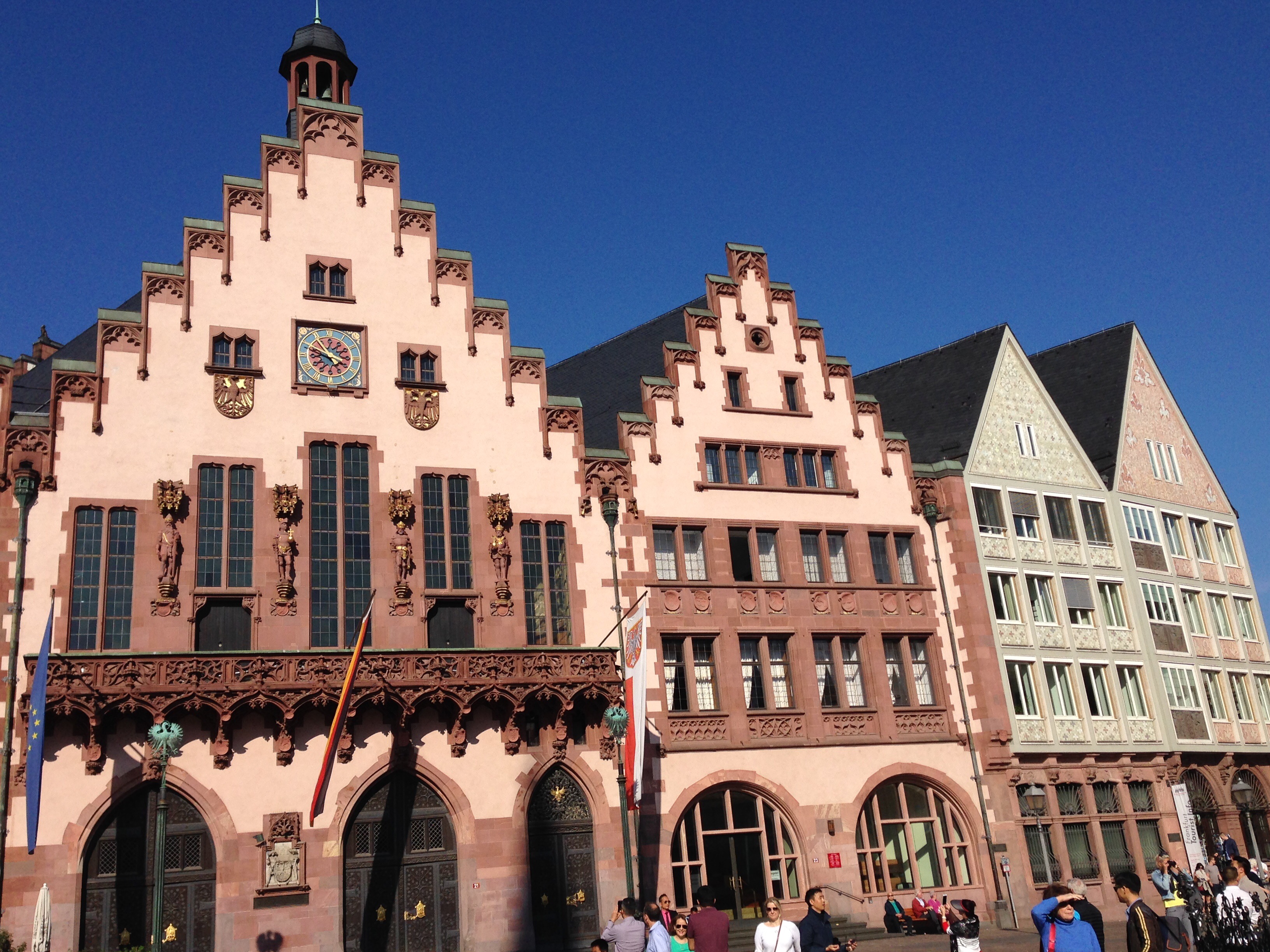 Römer and other half-timbered houses of the Römerberg.

The Römerberg has been the historic heart of Frankfurt since the Middle Ages and is the center of the Altstadt. Almost totally destroyed in WWII, it is a picturesque rebuild of its former greatness. Buildings include the 1405 Römer which has been the city hall (Rathaus) of Frankfurt for over 600 years. About the square are beautiful rebuilt half-timbered houses. In the square’s center is the large Römer fountain which, when a new Holy Roman Emperior was named in Frankfurt, ran with wine, thus making locals very happy citizens indeed. 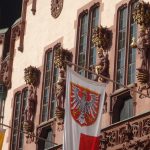 Also in the Römerberg is the spot for the Book Burning Memorial, the site where the Nazi coordinated the burning of all books they deemed inappropriate. Burned books included those by Helen Keller. As a “inferior, handicapped blind person” her books were turned in and burned. This is the first but far from the last site on our walk where Greg stresses that Frankfurt had not supported Hitler. This liberal city drug its feet at every opportunity. In turn, Hitler hated Frankfurt.

The Alte Nikolaikirche is one side of the Römerberg. A Lutheran medieval church, it has 51 bells. The first chapel on its site was built in the mid-12th century, the current in the mid-15th. The Old St Nicholas Church had only minor damage in the war.

Haus Wertheym is the inner city’s only original half-timbered house left at the end of WWII. The half-timber architecture is typical of the old city and was built as a way to save money. By building the ground floor of stone and upper stories of timber, residents saved money and taxes and created some striking houses. Nearby is the bakery where JFK stood for photos and possibly ate his first Berliner pastry before heading off to his “Ich bin ein Berliner” speech. Certainly his speech was referring to the citizens and not the donut.

The Eisener Steg or Iron Bridge over the Main River affords a nice view of the old and new skyline of Frankfurt. This pedestrian bridge is the “love locks” site for local couples to express their un breakable love by clamping a lock to the bridge. Currently, the city is encouraging couples not to throw the key in the river as their numbers is causing a toxicity that is killing the fish. Along its banks is a wonderful walking path for sunny days. Just across the river is museum row where the majority of Frankfurt’s museums are found. 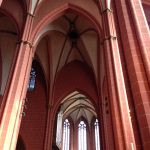 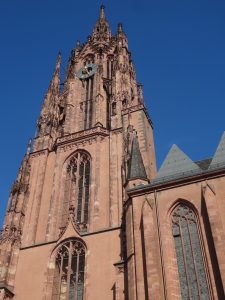 Cathedral of Saint Bartholomew, or the Kaiserdom, was never a true cathedral. It is called Kaiserdom (“imperial cathedral”) or simply the Dom due to its importance as the site of former elections and coronations of the Holy Roman Emperor for centuries. Since the late 19th century, excavations have revealed buildings that trace back to the 7th century. St. Bartholomew is the collegiate church of Frankfurt and was constructed in the 14th and 15th centuries on the foundation of an earlier church. From 1356 onwards, emperors of the Holy Roman Empire were elected as kings in Germany, using the Wahlkapelle, a chapel on the south side of the choir built for this purpose in 1425, and from 1562 to 1792, emperors-elect were crowned here. WWII bombings severely damaged the church and the interior was burned out completely. The church was  reconstructed in the 1950s. Are those blocks of stone or is the mortar design painted on? 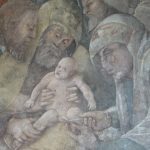 Fresco of circumcision of Jesus

Joe rage Ratgeb’s wall paintings in the Karmeliter Kloster (Carmelite Cloister), is the largest religious wall paintings north of the Alps, painted in the early 1500’s. The huge fresco depicts the life of Jesus, including the scene of circumcision where the rabbi wears a pair of glasses. No mistakes were risked because of poor vision.

Because it is Sunday, most stores are closed, including the Klein Markt Halle. It is a highly recommended produce market. I love markets and am sorry it is closed. The high end shops and retail stores are also closed, a surprising twist in a modern capitalist society.

Life-sized bronzes of a Bull and Bear are seen at the Frankfurt Stock Exchange. Frankfurters have been renowned as bankers and money lenders for centuries. All parts of the bull are anatomically correct.

We walk past the remaining Eschenheimer Turm, an original guard tower from the city’s outer defensive walls, built in the early 1400’s and the only one of the original 60 wall towers not destroyed by Napoleon. Some 53% of the city is comprised of parks and gardens and most were planted to outline the original stone walls Napoleon destroyed.

The Goethe House, where Frankfurt’s’ favorite son was born, has also been restored. It is nearby Goetheplatz where his statue stands. After the war, his home was the second building they reconstructed.

Other stops and narration include Paulskirche, the location of Germany’s very first democratically elected parliament in 1848; the Stumble Stones commemorating the many victims who lost their lives under the Nazi regime; the Alte Opera, one of Europe’s classic opera houses, once known as the most beautiful ruin in Germany and the building that the mayor “Dynamite Rudy” suggested be blown up instead of repaired; and St Leonard’s where, for a price, pilgrims and visitors were buried in the church until the church ran out of room so buried them on top of each other, and over 10’ of headstones are being excavated marking these mass graves. 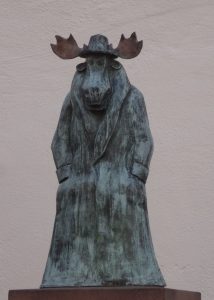 And Greg’s continuous narrative is constantly sprinkled with tidbits of history, gossip and humor. What about the largest Euro sculpture with its original 12 stars, one of which is usually dark marking first Greece and now Great Britain’s potential exit? Or what about a bank’s skyscraper where on the 39th floor there is an infinity urinal over Frankfurt?

Loved the story about the time Hitler came to town and the vegetarian restaurant where he ate was the hotbed of an anti-Nazi underground group who learned his next day’s route and the night before covered the route with anti-Hitler signs. And when the Nazis asked for the church bells of Germany in order to melt them down to make tanks, Frankfurt drug its feet to the last. As a result, the war was over before they were melted so Frankfurt has most of its original bells. No wonder Hitler hated the city.

After the tour, the group joined Greg at the Paulaner behind the Dom for drinks and dinner. It was a wonderful tour and I highly recommend it for an introduction into Frankfurt. The knowledge learned most certainly encourages me to return for a more in-depth visit.

Frankfurt opened a Dunkin’ Donuts a couple years ago and for months people lined up everyday for hours to buy a donut! It also is the city that lies less than 25 miles from the geographic center of the European Union. St. Bartholomew has a statue of Prince-Bishop Franckenstein, the namesake for Mary Shelley’s book. There are many churches, museums, garden and river paths, a market, cafes and German Weißbier. Seems this is my kind of town and I should have explored it years ago. Certainly I am glad I did today.
Categories: Travel
Tags: FrankfurtFrankfurt on FootGermany