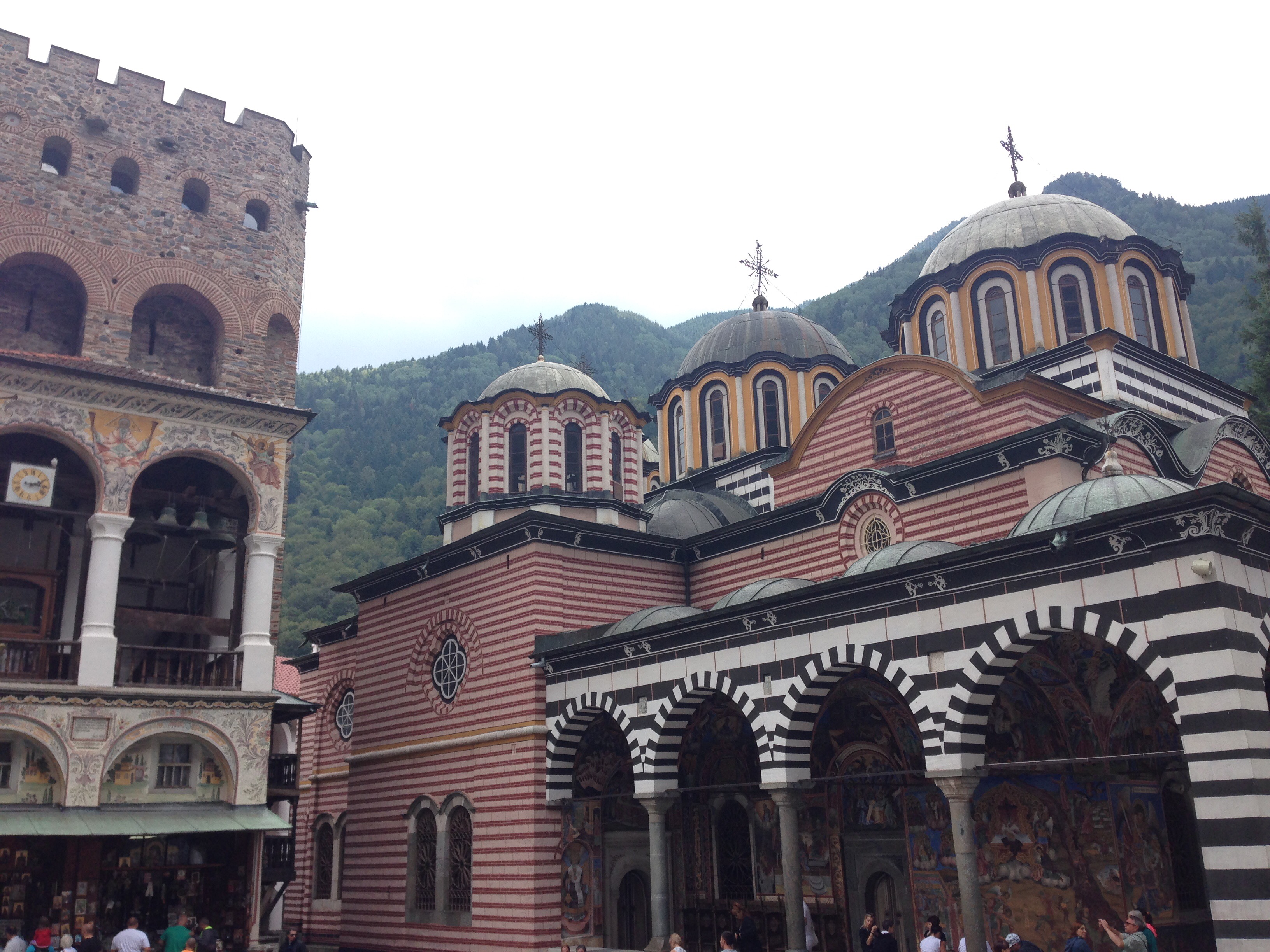 An “A HA” moment at Rila Monastery.

After countless churches, scores of monuments, a plethora of museums and sites, it becomes harder and harder to feel an “A HA!” moment.

Zipping south on a relatively new highway, I am driven into the Rila Mountains and its largest tourist draw, the 10th century Rila Monastery, one of Bulgaria’s most important historical and architectural monuments and a UNESCO site. Stepping into its courtyard beneath towering cloud-draped mountains, the Rila Monastery provides one of those “A HAs!” I am surrounded by the lofty green peaks of the highest mountain range of Bulgaria and the Balkans. Clear rushing streams and drifting low clouds provide a perfect backdrop for revitalization and contemplation.

The name Rila is believed to be of Thracian origin and means “well-watered mountain,” owing to Rila’s plethora of lakes (over 200) and hot springs. Some of the Balkans’ largest and deepest rivers originate from Rila. It is an ordinary drive until reaching the mountains when the terrain gets greener, trees taller, and rivers faster.

The Monastery of Saint Ivan of Rila, better known as the Rila Monastery, is the largest and most famous Eastern Orthodox monastery in Bulgaria. It is situated in the southwestern Rila Mountains inside the Rila Monastery Nature Park – just 75 miles south of Sofia. The deep valley of the Rilska River is an elevation of 3,763 ft with Musala Peak hiding in the clouds at 9600 ft.

Rila is said to have been founded by the hermit St. Ivan of Rila (876 – 946 AD) during the rule of Tsar Peter I (927-968). The hermit actually lived in a cave while the complex was built by his students, who came to the mountains to receive their education. 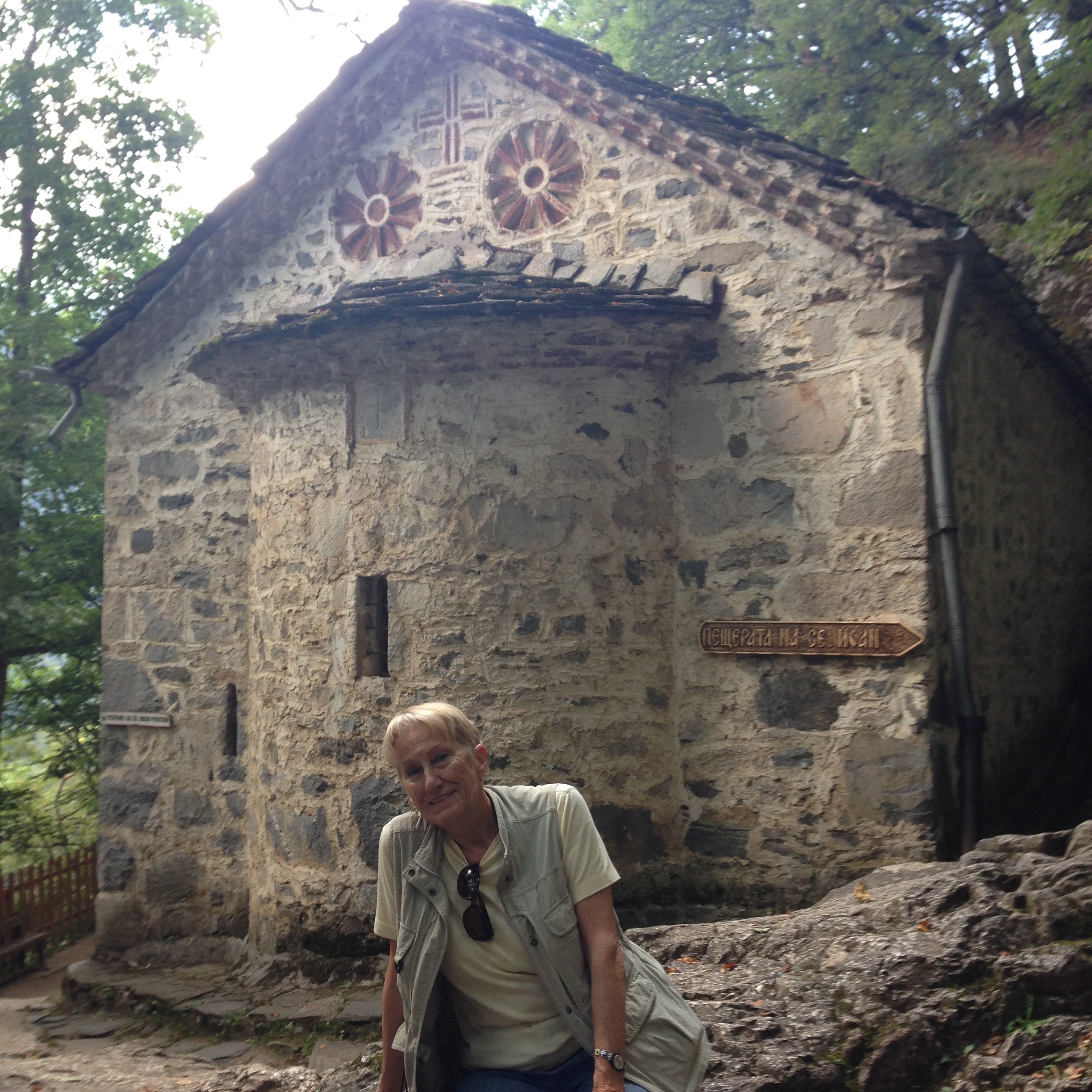 So our first stop is a little beyond the monastery for a pilgrimage hike to the cave where Saint Ivan Rilski supposedly lived without any material possessions. The short but rocky hike starts from a parking lot just below the steep path leading through century-old beech forests. At the top is a small chapel. Right behind it is a small dark cave in the rocks – the place where the saint is said to have lived for years and where originally his remnants were buried. It is also said if you climb the wooden stairs to squeeze through a narrow rock chimney to exit above, you will be guaranteed a purification of the soul. Bring a flashlight as the candles in the cave do not illuminate the stairs. It is narrow and takes some twisting and turning but at the top of the path is a cool refreshing water fountain. Purification I can’t guarantee.

From the cave trail, I return by van (a serious pilgrim would walk) the 2 miles or so down the mountain to the monastery.

Rila Monastery was reerected at its present place by a feudal lord during the first half of the 14th century. The oldest buildings in the complex date from this era while the Tower of Hrelja (1334–1335) and a small church just next to it dates around 1343, as do the bishop’s throne and the engraved gates. However, the arrival of the Ottomans followed by numerous raids destroyed the monastery by the middle of the 15th century.

Thanks to donations by the Sultana Mara Branković, the Russian Orthodox Church and the Rossikon monastery of Mount Athos, the Rila Monastery was rebuilt in the end of the 15th century. With the Sultana’s influence, Ivan of Rila’s relics were moved to the new complex in 1469. 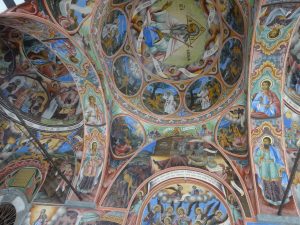 From its beginnings, the monastery has been supported by Bulgarian rulers. Monetary support was provided by almost every tsar of the Second Bulgarian Empire up until the Ottoman Conquest, making the monastery a center for the Bulgarian language and the cultural and spiritual center of Bulgarian national sentiment that reached its apex from the 12th to the 14th century. During the time of the Bulgarian National Revival period (18th-19th century), the monastery was again destroyed by fire (1833) and then reconstructed between 1834 and 1862. The residential buildings were added in 1816, while a belfry was added to the Tower of Hrelyu in 1844. The monastery is also recognized as one of the hideouts for Bulgarian revolutionaries in more modern times.

Entering the gates of the monastery provides that “A HA” moment. The architecture, colors, and brilliant frescoes are stunning.

The whole enclosed complex occupies an area of almost 95000 square feet and is rectangular in form, centered upon an inner courtyard of over 34000 sq. ft. where the tower and the main church are situated. 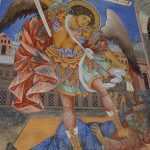 The monastery’s main church was erected 1834 – 1837. It has five domes, three altars and two side chapels, while one of its most precious items is the wood-carved and gold-plated iconostasis, the creation of which took four craftsmen five years to complete. The frescoes, finished in 1846, are the work of many masters, including the famous brothers Zahari and Dimitar Zograf. The church is also home to valuable icons, dating from the 14th to the 19th century. Porticos in the courtyard have striped painting as do the domes. The porticos’ colorful biblical and allegorical frescoes are stunning. The entire monastery, still home for some 60 monks, is regarded as a masterpiece of Bulgarian National Revival architecture, and was declared a national historical monument in 1976 and UNESCO World Heritage Site in 1983. Deservedly so. The entire experience is that wonderful, unforgettable “A Ha” moment I seek. 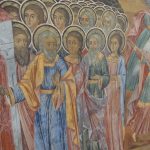 Inside the church, pay respects to Tsar Boris III. Shortly after returning to Sofia from a meeting with Hitler, Boris died of “apparent heart failure” on 28 August 1943. Following an impressive state funeral at the Alexander Nevsky Cathedral in Sofia, where the streets were lined with weeping crowds, the coffin was taken to Rila Monastery. After taking power in September 1944, the Communist-dominated government had his body exhumed and secretly buried near Sofia. Later, the Communist authorities moved the zinc coffin to a secret location, which remains unknown to this day. After the fall of communism, an excavation was made but only Boris’s heart was found, as it had been put in a glass cylinder outside the coffin. The heart was taken by his widow in 1993 to Rila Monastery, where it was reinterred.

Within Rila are several museums for an additional entrance fee. You can also climb to the top of the tower for spectacular views, or even to the second floor of the monastery for better views – all for additional fees. And if you are so inclined, there are rooms to let for the night that will provide an even richer experience of this wonderful site.

The overall experience of Rila Monastery?  It is an “A HA” moment not to be missed.