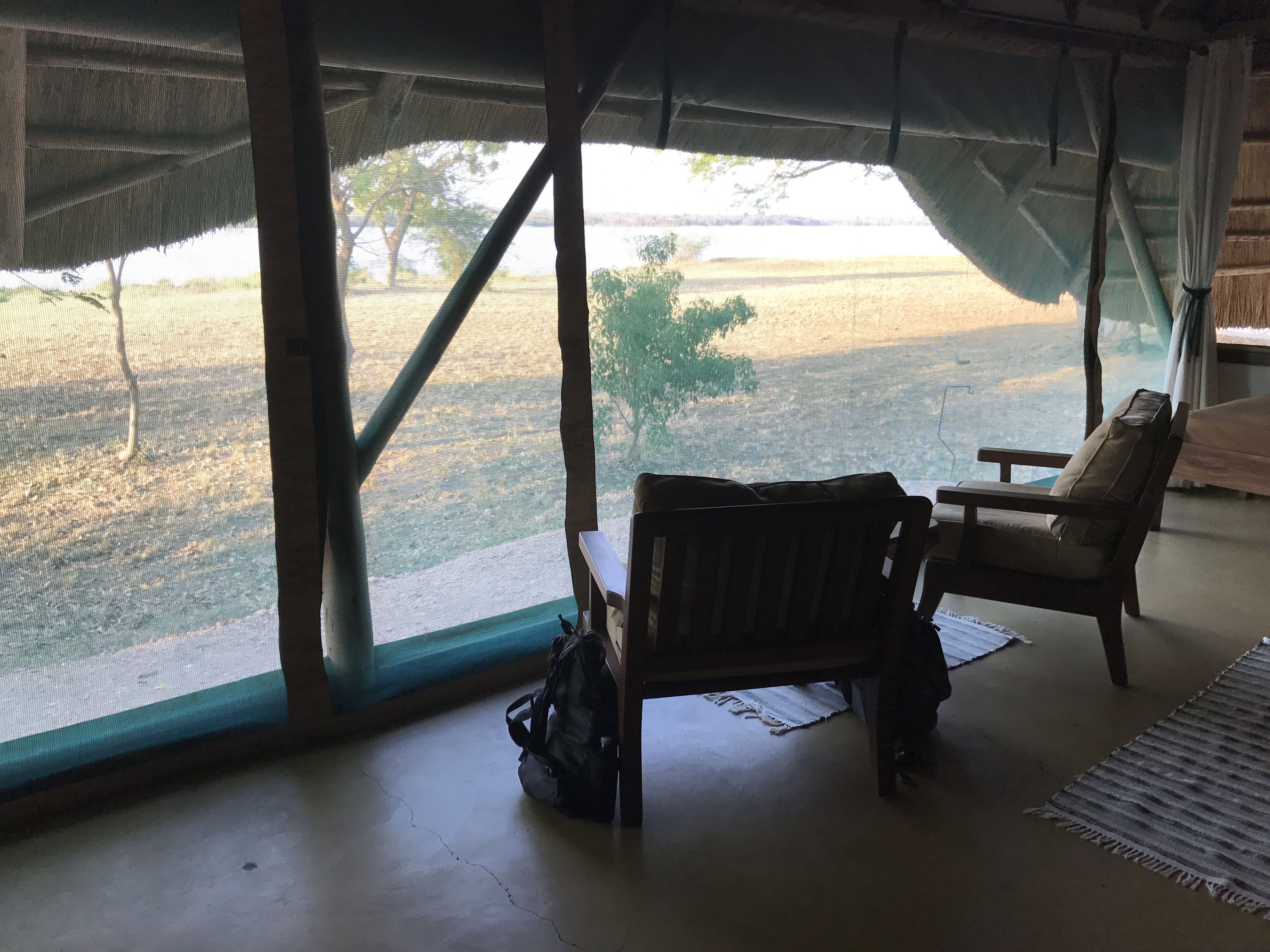 What can I say about game drives? You drive around in a huge open safari jeep hoping to spot game. It reminds me of the long drive to Disneyland and the challenge to be the first to spot the Matterhorn above the freeway skyline. But now I am looking for lions, big elephants and chubby warthogs. I am driving to Murchison Falls National Park to explore its grasslands and spot its wildlife.

Murchison Falls National Park (MFNP) is incredibly diverse and a part of the Great East Rift Valley. It covers an area of almost 2000 sq. mi., an area roughly the size of Delaware! Included in this park area is Bugungu and Karuma wildlife reserves. It lies in northwestern Uganda, spreading inland from the shores of Lake Albert and along the Victoria Nile flowing east to west for 71 miles up to the spectacular Karuma Falls.

MFNP may be only 176 miles from Kampala but the roads continue to assault my backside as we bump and weave our way northwest. “Road” is an exaggeration! Driving time is about double what one would expect. The roadsides are lined with narrow 20’ shops and homes that seem to have one wood door and no windows. The iron doors seen on some homes are a sign of wealth. Water is carried from the nearest bore hole by the women and children. Children learn early to share the work, as young as four. Wood homes with corrugated tin roofs alternate with mud and wattle homes with reed roofs. Bicycles and motorbikes are the predominant mode of transport, other than walking. As our driver says, “Any load on the road.”

The Chinese are building a highway all the way to Murchison Falls. I contemplate how this traditional life will change upon its completion. Will the longhorn cattle drive continue to share the road?

Our destination is Baker’s Lodge, situated on the south bank of the Nile River which cuts through MFNP. Named after an English explorer, Samuel Baker, the lodge affords a luxury safari experience while the Nile flows but feet from my mosquito-netted “tent.” The river’s wetlands host a plethora of birds and pods of hippos. The lodge and environs are spectacular. After our instructions for the solar powered equipment and security briefing, we are escorted to our rooms – just a heavy curtain screen between me and nature. Sipping sherry and watching brilliant constellations in the night sky, I listen to the chirping and peeping of birds and night insects, watch the bats dive for their dinner, and hear the snorts, grunts and splashes of the hippopotami somewhere in the pitch black dark.

I pinch myself. I sit on the banks of the historic Nile River.

The Nile is a north-flowing river and at least 4,258 miles long, possibly the longest river in the world. Its waters are shared by eleven countries, namely, Tanzania, Uganda, Rwanda, Burundi, Congo-Kinshasa, Kenya, Ethiopia, Eritrea, South Sudan, Sudan and Egypt. The source of the Nile is sometimes considered to be Lake Victoria, but this lake has many large feeder rivers. As of 2010, exploration parties continue to seek an undisputed source. 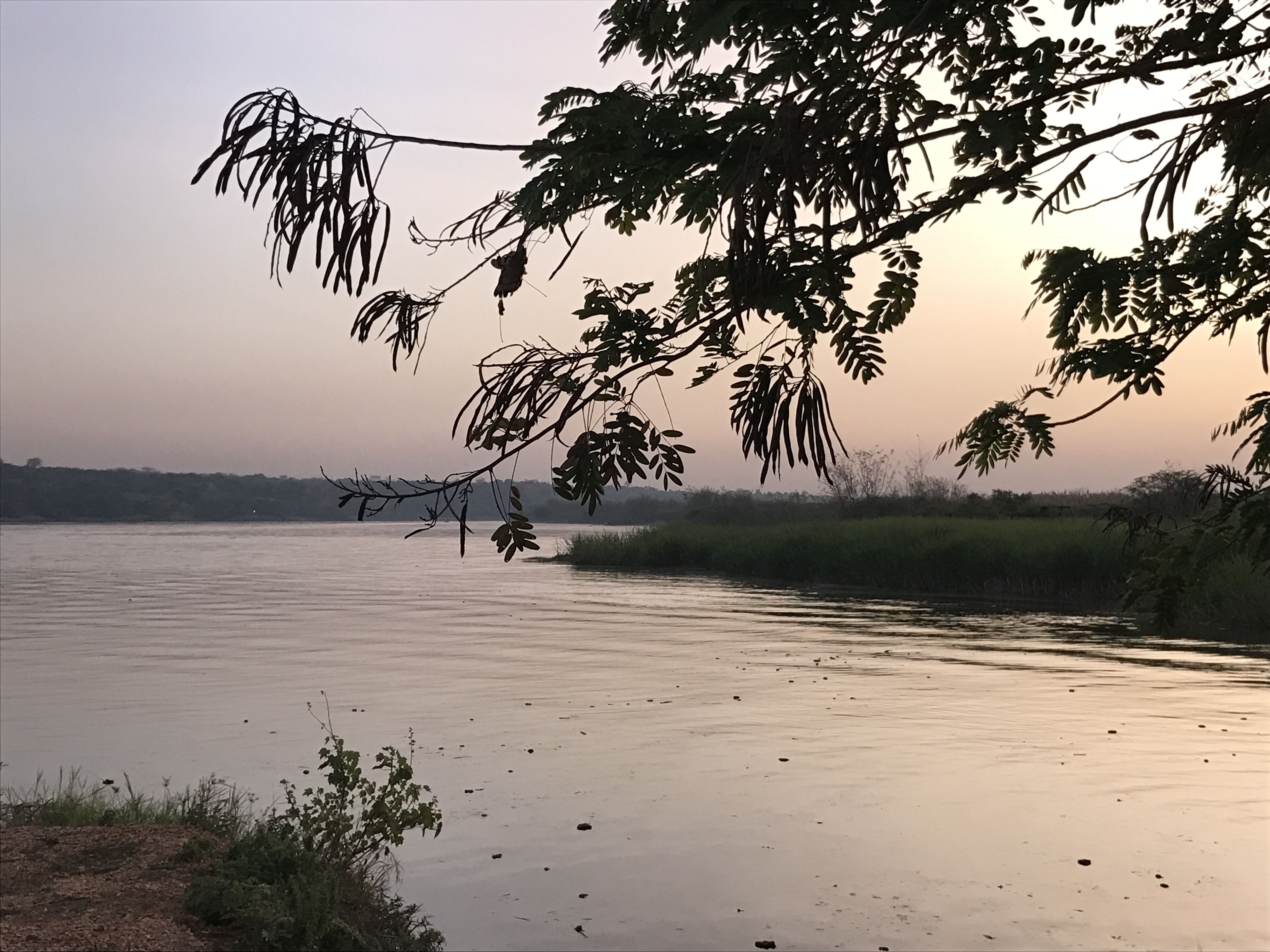 The Nile has two major tributaries: the longer White Nile is considered to be the headwaters, while the Blue Nile is the source of most of the water and silt. It remains a mystery as to the true source of the White Nile in equatorial East Africa, waters of which then flow north through Tanzania, Lake Victoria, Uganda and South Sudan. The Blue Nile begins in Ethiopia and flows into Sudan from the southeast. The two rivers eventually join waters around Khartoum, capital of Sudan.

Just the drainage basin of the Nile covers about 10% of the area of Africa!

The Nile leaves Lake Victoria at Jinja, Uganda, as the Victoria Nile. It flows north for 81 miles to Lake Kyoga, then the river exits the lake flowing west for 120 miles before turning north then making a great half circle to the east and north to Karuma Falls. From here the Victoria Nile moves westerly through Murchison Falls, enters the northern shores of Lake Albert forming an immense river delta. After leaving Lake Albert, the river continues north through Uganda and is known as the Albert Nile.

(The river then flows into the Sudan where it is called the White Nile. After Khartoum it meets the Blue Nile which flows through Egypt to the Mediterranean. The Yellow Nile is a section in Eastern Chad that joins the Nile beyond Chad’s northern border.)

Countries including Uganda, Sudan, Ethiopia and Kenya have complained about Egyptian domination of its water resources. It is very difficult to have all these countries agree with each other given the self-interest of each country and their political and social differences.

Despite efforts, drought and resulting starvation remains a periodic problem for many along the Nile. In 2010, Ethiopia, Rwanda, Tanzania and Uganda signed a new agreement on sharing the Nile water even though this agreement raised strong opposition from Egypt and Sudan.

The length and breadth of this body of water, the life it supports, is truly amazing.

Over the next two days, I will participate in two game drives in Murchison Falls NP. The park has 76 species of mammals and 450 bird species. It is also home to Uganda’s largest population of crocodiles and a whole bunch of hippopotami. It should be fun cruising in our pop-top jeeps, spotting wildlife.

For now, I spy a praying mantis, bat, large lizard, small gecko – and that is inside my room! What awaits across the historic Nile?