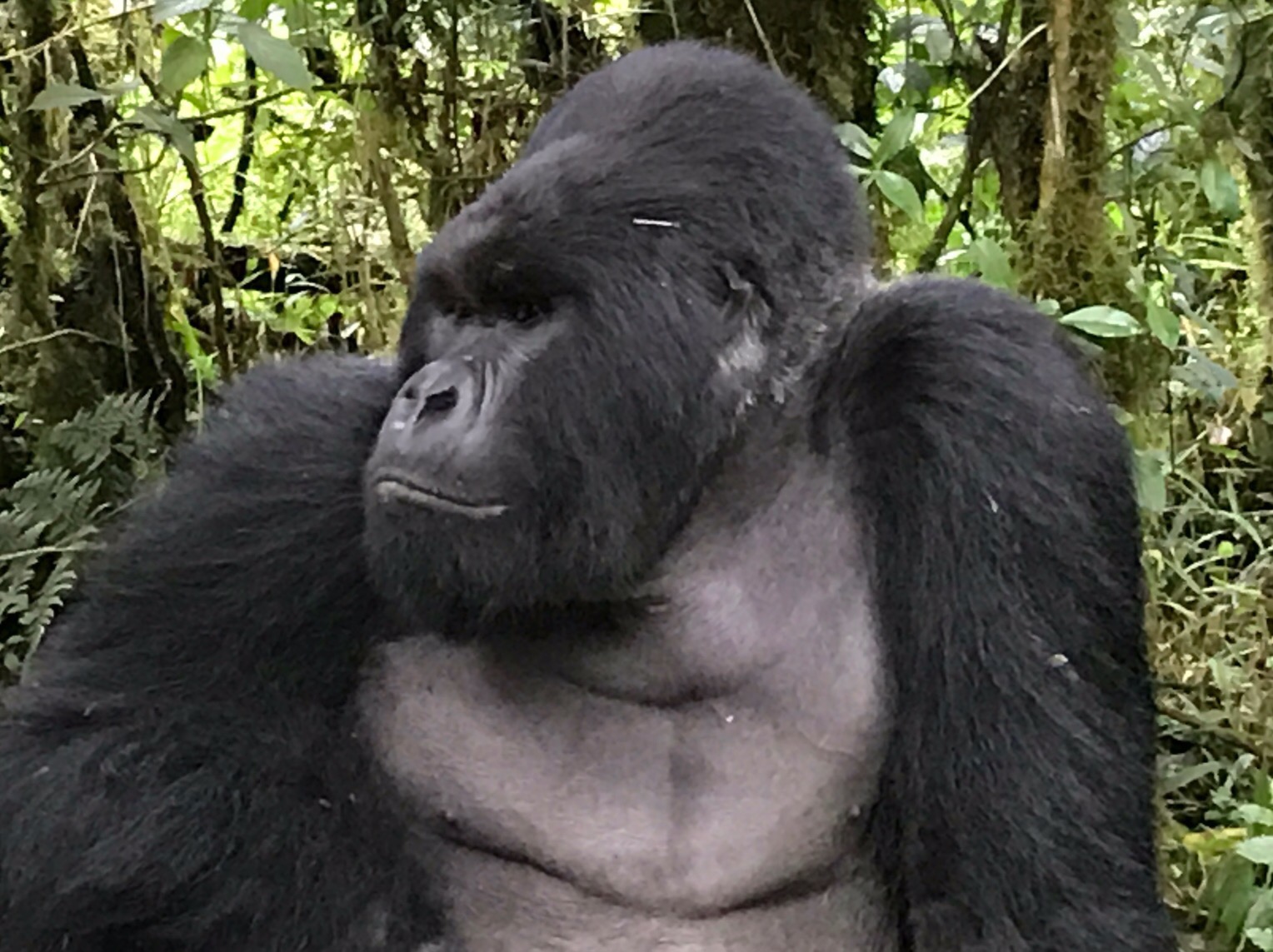 I visited the Kwitonda family this morning. Within minutes of climbing a fence and entering their forest back yard, I found a large group of mothers and infants gathered around a rotted log having a picnic of mushrooms. The mothers ate; the infants clumsily practiced their vine and climbing skills. Their father and 450 pound protector sat close by expressing his pride and approval. He is responsible for 28 members of his extended family and I was fortunate to spend an hour with them.

Kwitonda is a migrant group of gorillas from the Democratic Republic of Congo. It was named after its dominant silverback called Kwitonda which means ‘Humble one’. On 10 September 2012, park trackers found the body of Kwitonda. He had been missing for more than a week. No foul play was suspected as Kwitonda was estimated to be 40 years old and showing signs of failing health. Three younger silverbacks in the group, Akarevuro, Kigoma and Magumu were waiting their turn to become Numero Uno.

Silverback Akarevuro became the new leader. He assumed leadership but the other silverbacks, especially Kigoma, is ready to either challenge his authority or establish a group of his own.

Akarevuro is huge, noble, and proud. I am the humble one in his presence. His group wonders along the upper and lower slopes of Mt. Muhabura and is known as difficult to track because of their huge range and levels of elevation. The group is composed of 28 members including 2 silverbacks, 4 blackbacks, 6 adult females, 5 infants, and juveniles. At least twenty of the family troop gather around the log and among the nearby bushes and vines. Today they are incredibly easy to find and track. Thank the forest gods for that log! 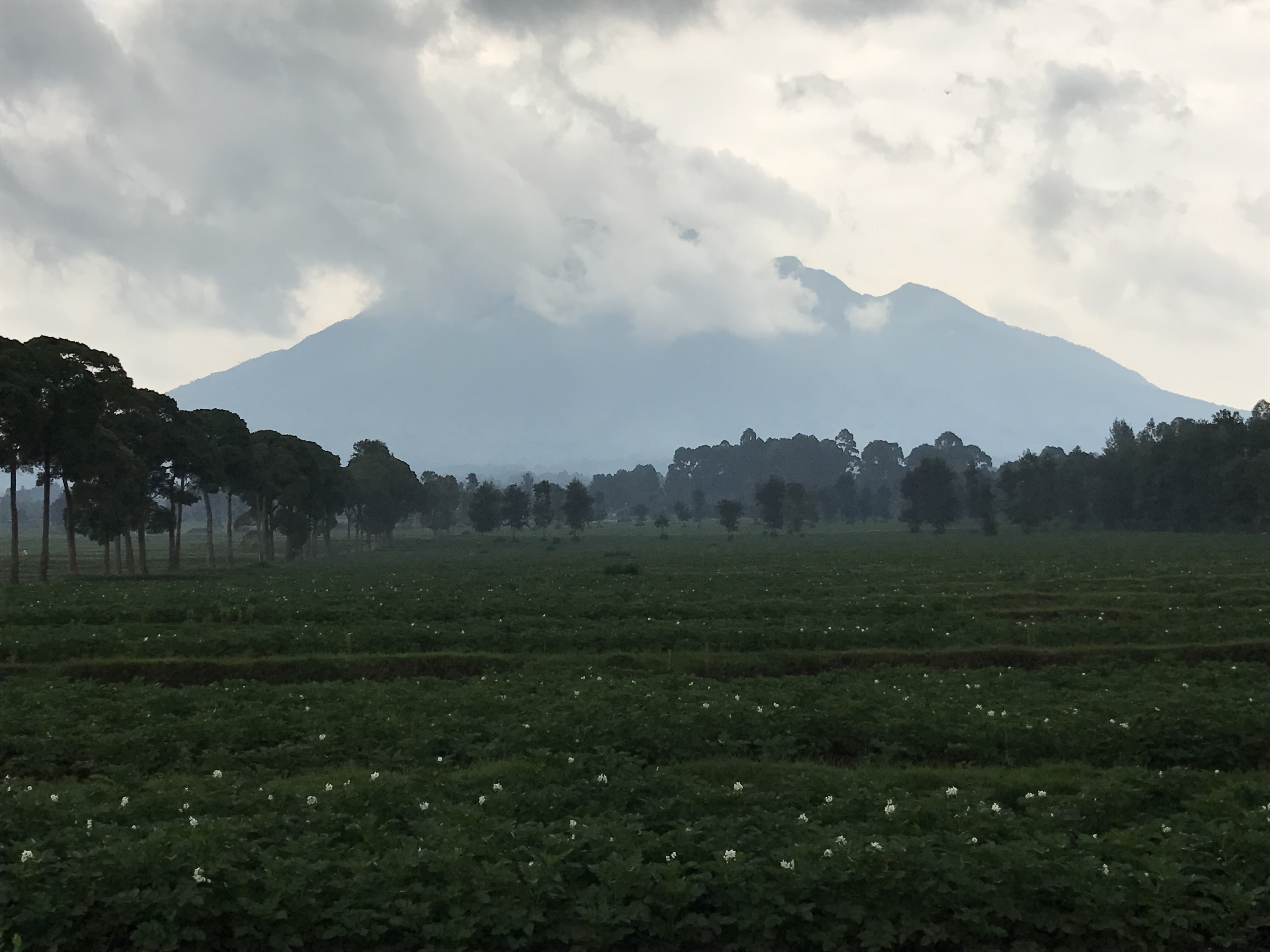 Volcanoes National Park is a stunning backdrop to my gorilla trek and explains the title of Dian Fossey’s ” Gorillas in the Mist.” Three volcanoes hover on the horizon: Muhavura ‘the guide’ at 13,500′ and covered in cloud and mists, Gahinga or ‘pile of rocks’ and Sabinyo meaning ‘old man’s teeth’. Here, within these volcanoes are the borders of Rwanda, Uganda and the Congo. Just over the fields and foothills is the grave of Dian Fossey who dedicated her life to the preservation and protection of Kwitonda and his family. This is an impressive location for impressive cousins of this upright and clumsy human.

As at Bwindi in Uganda, our hike could be a challenge of mountainsides, vines, brush and tangles. For our group of women, it could be an hour’s steep climb. Instead, as we receive instructions on ‘gorilla etiquette,’ I listen to the grunts and calls of the gorillas as they forage close-by.

Within moments, I am a standing around the gorilla breakfast table watching several feed on mushrooms. One rips apart the log to gain better access. Infants climb, swing and totter among the adults playing and interacting, learning how to be a gorilla. Infants range in age from about seven months to a year. ‘Cute’ is not an accurate term. Anyone watching would want to take one home. However, we must remember these are habituated animals, not pets. They grow to be 250-450 pounds, develop large canines and huge hands that easily rip the bark from trees.

Moms, youngsters and blackbacks knuckle-walk past and through our group. So close they are I could easily reach out and feel their furry backs. If I want to possibly get my face ripped off. It will also immensely displease our guides and trackers. They are here to protect us as well as the gorillas. We are told to follow everything they tell us. The guides are very attentive to gorilla signs as well as insuring we all get our photos. They bring us up close and personal with these animals, each of whom they know well and by name.

The silverback of the troop sits quietly under a tree. He rules, protects, and rumbles his pleasure at showing off his family and virility. After all, he thinks these five infants are his. Did a female stray and produce another’s child? She isn’t telling. Occasionally, our guide grunts back a reply. It is soothing and respected. I am allowed to stand within a few feet, to sit just ten feet from these moms to take a photo. An inquisitive infant comes closer, interested in these strangely dressed primates. Mother reaches out to retrieve or guides audibly shoo him back. Protects us, protects them. 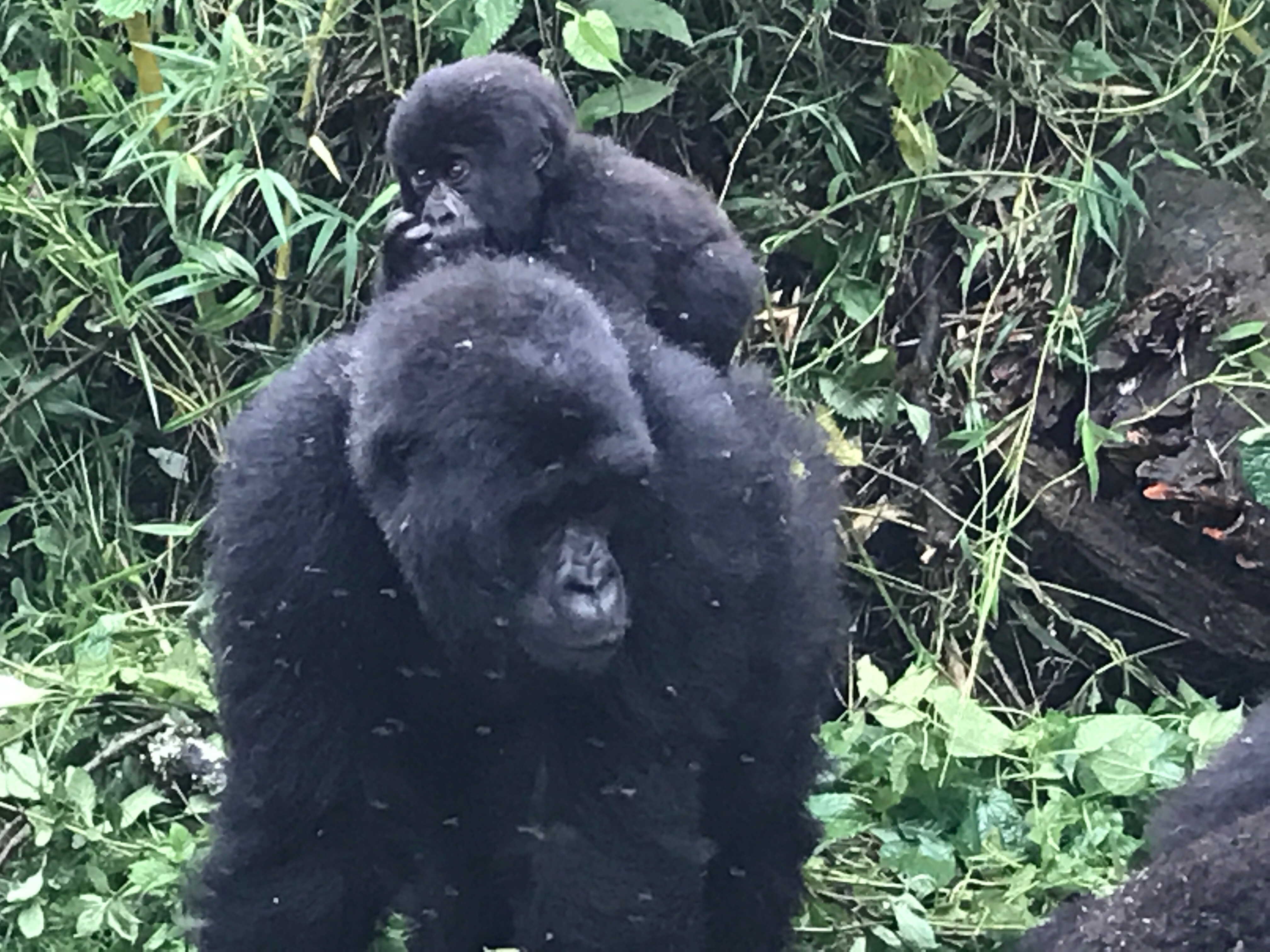 Maternally related females in a troop tend to be friendly towards each other and associate closely. Otherwise, females have few friendly encounters and commonly act aggressively towards each other. We see this behavior as two females seem to aggressively chase each other. Then they sit to share their space. I am not conversant in gorilla language and just wonder what’s up. Other females sit and watch their infants play, climb, hang, and generally explore their environment. One female seeks privacy to nurse her infant, something done hourly.

Gorillas enter their juvenile period at their third year, and this lasts until their sixth year. At this time, gorillas are weaned and they sleep in a separate nest from their mothers. We see several juveniles and an additional silverback. He is “allowed” to remain with the group so long as he minds his manners. Females are loyal to the Alpha male and do not tolerate other advances. Unless, of course, the Alpha male dies or is defeated in combat. The blackbacks remain on the fringe and wait their turn – maybe.

The lifespan of these magnificent gorillas is 40-50 years. Highly intelligent (think of Koko and her ability to learn sign language), I observe Akarevuro observe me. What must he be thinking? He appears bored. But as still as he is, he can easily explode with energy and charge past us. In fact, several gorillas walk within inches of us. It is we who are in their domicile and we who move to accommodate their passage. 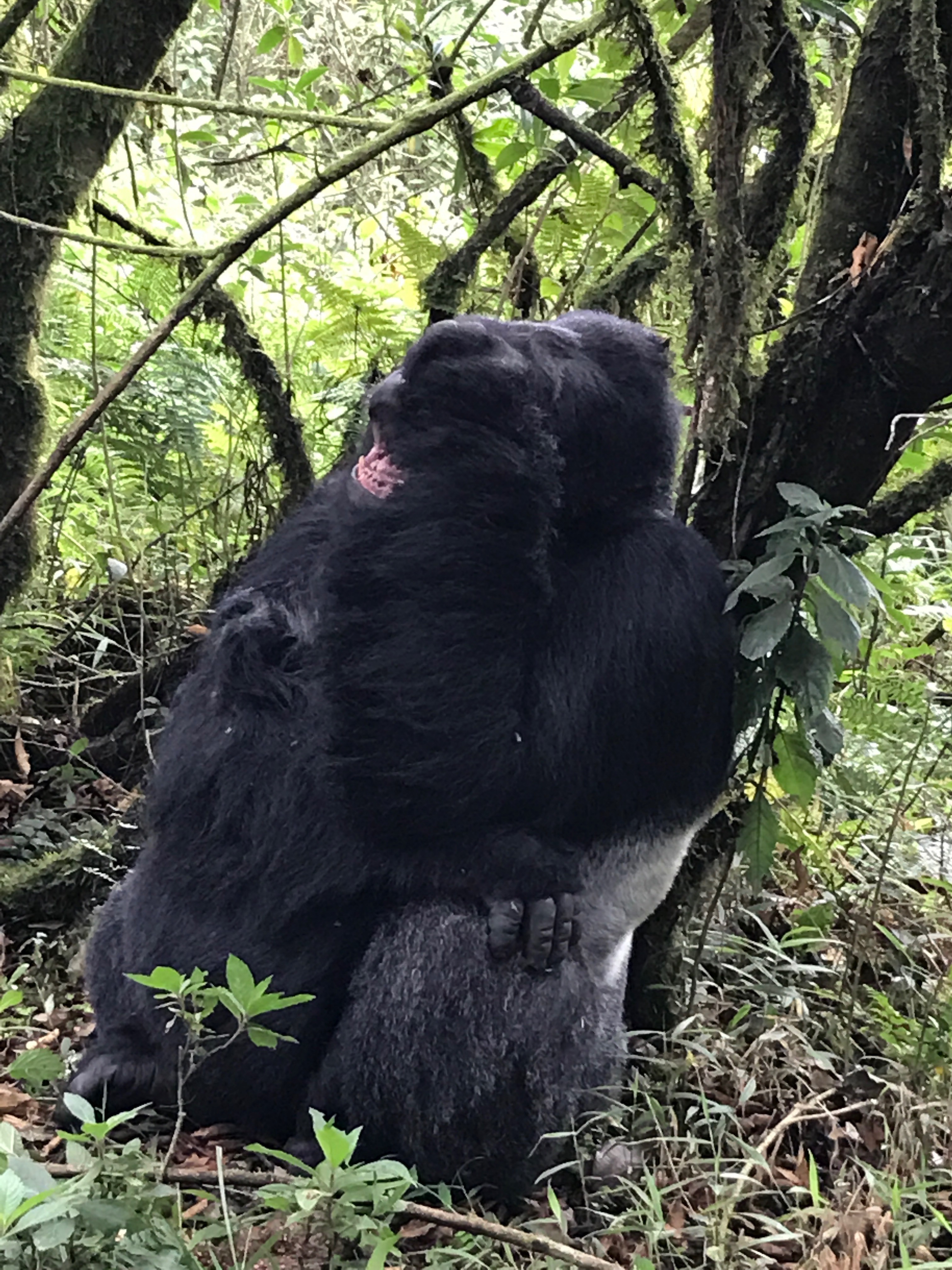 My experience with the mountain gorillas is awesome. I am within feet of these mammals as they go about their daily lives. They tolerate my presence. They forgive my clumsiness. They are totally unconcerned with the outside world, its craziness and cruelty. They are magnificent. We upright primates have lost the ability to form such protective family bonds, such trust and communal cooperation. What happened to the upright primate? Perhaps I see not boredom but sadness in Akarevuro’s eyes.