Kampala, the capital of Uganda, was named the 13th fastest growing city on the planet. Having just driven through the city, I know this statistic to be true.

Our drive from Entebbe is uneventful as our massive six-passenger safari jeeps weave around and through dense, chaotic traffic. Motorcycles and bikes, pedestrians and the occasional cow make it all the more challenging. The roads and automobiles are remnants of the British colony as is the national language of English. We arrive into Kampala having passed what seems an endless line of storefront shops and entrepreneurial businesses. Everyone has something to sell. However, business and everyday life is conducted in local Uganda dialects. 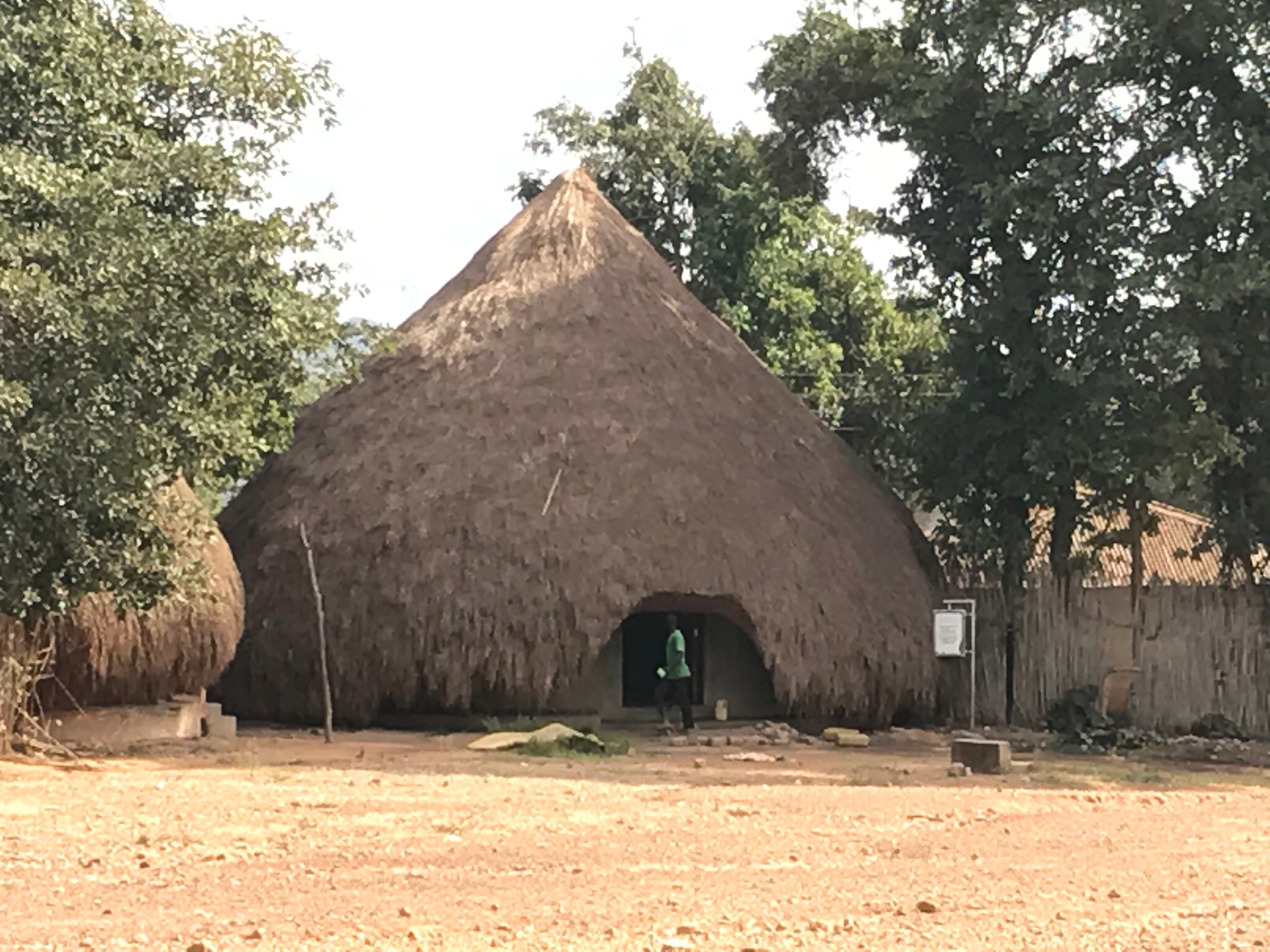 In 1905, the British formally declared the entire territory to be a British colony. At that time Entebbe was the capital. However, When Uganda declared independence in 1962, the capital moved to Kampala, the primary economic and manufacturing center for Uganda. Entebbe has been left to languish, but I think many residents of Entebbe probably believe this has been mostly a good thing. Certainly if they ever drove in the capital, they must.

Following the 1962 independence, Milton Obote became president of Uganda until 1971, when Idi Amin took power following a military coup. He proceeded to expel all Asian residents, particularly Indians, living within Kampala, and attacked the Jewish population. In 1978, Amin invaded Tanzania, kicking off the Uganda–Tanzania War, which severely damaged the buildings of Kampala.

Since war’s end, the city has been rebuilding and growing. Traditionally, Kampala was a city of seven hills, but over time it has come to have a lot more. And it’s skyline is now dominated by the Hilton and its communications towers. In December 2015, Google launched its first wi-fi network in Kampala, now ranked as the best city to live in East Africa.

But the memory that lasts is of the endless maze of markets and local sellers. I have never seen such masses of humanity nor density of entrepreneurs. For miles, we pass shops, tables, or blankets spread on the dirt. Motorcyclist hang about on corners as they wait for a fare. And everywhere I look there is the yellow sign or kiosk advertising their own version of PayPal. A Ugandan goes to the kiosk and uploads his money to his phone account which serves in what is becoming a cashless society. These yellow “money pits” appear every block or so.

Kampala was the capital of the Buganda kingdom, from which several buildings survive, including the Kasubi Tombs, our first destination of the day. Built in 1881, the tombs are the site of the burial grounds for four kings of Buganda and members of the royal family, particularly wives. It became a UNESCO Site in 2001 and is an important spiritual and political site for Ganda people. Its traditional architecture uses purely vegetal materials and is one of the best examples in this region of sub-Saharan Africa.

The 64 acre site contains a gatehouse, drum house which holds royal drums, and a central courtyard, site of the kings’ tombs. Around the perimeter of the yard are the houses and tombs of his wives. The central building was originally the king’s palace built by Muteesa I, the 35th Kabaka (king) of Buganda. The palace compound became a royal burial ground on his death in 1884. Since, three other kings have been buried there.

The palace/tomb is 102′ in circumference and 25′ high. Originally built of reed, wattle and daub, and wood topped by a thatched roof, it was modernized in 1938 to include steel, concrete and bricks concealed behind a facade of traditional building materials. The tombs of the king and his wives, though underground, are concealed from the public by reed partitions with a barkcloth curtain and momentos of the kabakas. The floor is covered by lemon grass and palm leaf mats.

The use of modern building materials was the reason the inner tombs were saved during a devastating fire in 2010. The Buganda Kingdom has vowed to rebuild the tombs of their kings and the national government will assist in the restoration of the site (funded by Japan).

The Buganda kingdom was founded in the 13th century. Traditionally, the body of the deceased king was buried in one place, with a separate shrine for the deceased king’s jawbone, believed to contain his soul. Unusually, in a break from tradition, the site in Kampala contains the royal tombs of four Kabakas of Buganda.

The courtyard is bordered by several buildings of traditional construction, including several houses for the deceased kabaka’s widows, who tend the tombs for royal relations. Their houses are traditionally constructed of wattle and daub with straw thatched roofs, although over time some were rebuilt with bricks and metal roofs. Here also are the homes of living members of the royal family and other royal officials including the Nalinya (spiritual guardian), her deputy the Lubuga (responsible for coordinating the farming on the site) and her administrative assistants. It is also a centre for the traditional manufacture and decoration of bark cloth by the Ngo clan and for traditional thatching techniques of the Ngeye clan.

In March 2010, the Kasubi tombs were destroyed by a suspicious fire. However, the inner tombs were protected because of the modernization project, and remain intact though currently closed. Evidently, the fire occurred in the midst of an awkward relationship between the government of Uganda and the Buganda kingdom. The Ganda revere their kings and do not take lightly to government interference or disrespect of their kings, past or present.

We also visit two of the central religious centers in the city. We are told all religions get along in Uganda. While the country is predominantly Christian, a minority of Muslims and other religions peacefully coexist. 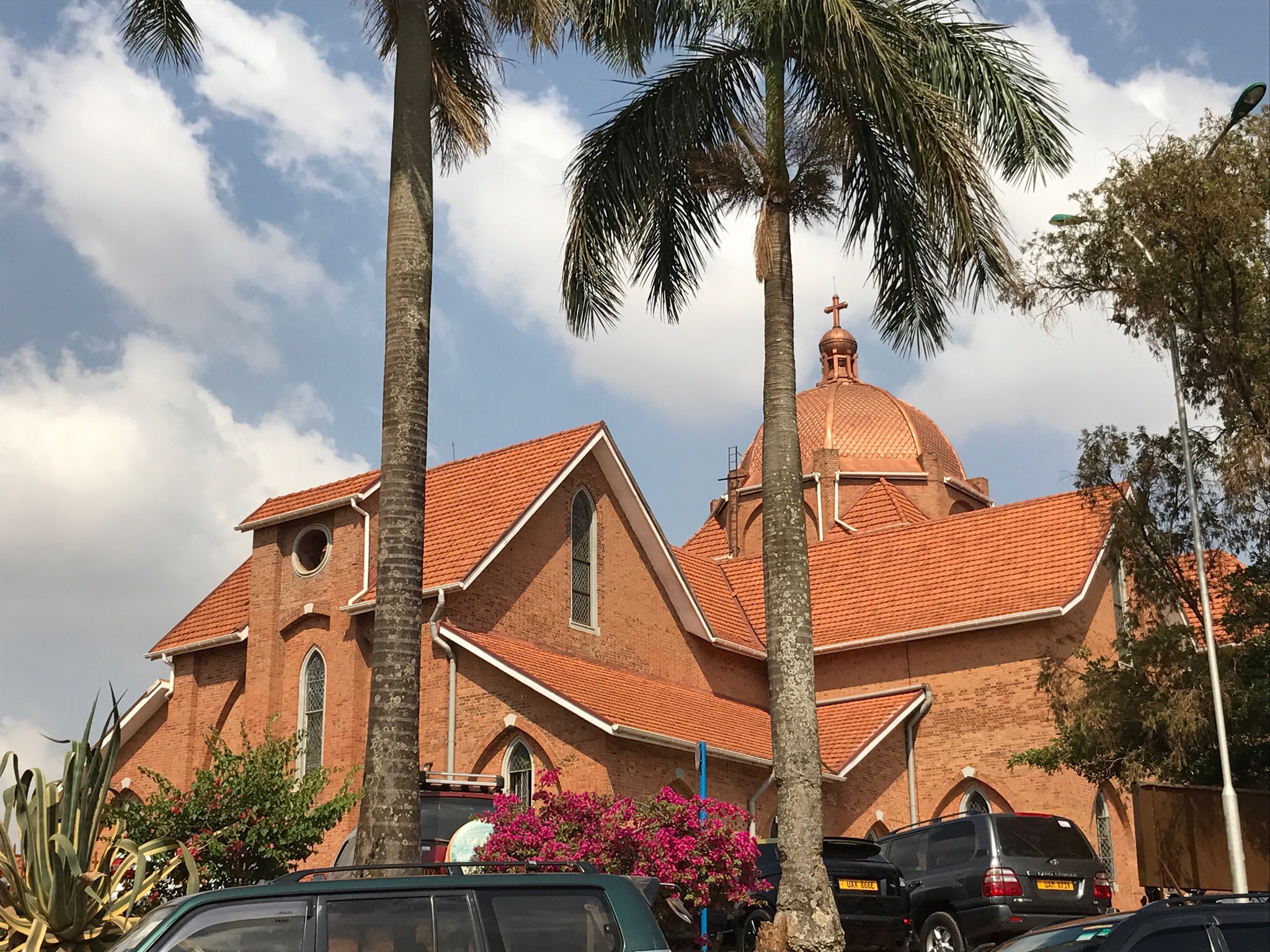 Saint Paul’s Cathedral Namirembe, or Namirembe Cathedral, is the oldest cathedral in Uganda and the principle Anglican place of worship since its founding in Buganda. The first church building constructed in 1890, with a capacity for 800 people, was abandoned in 1891 because it was located in a swampy area at the base of Namirembe Hill. It was basically constructed of native vegetation with a reed roof. So the second church, of similar construction but seating 3000, was built in 1892. However in 1894, strong winds blew the roof off the church. Following the ruin, a third bigger church was built, again using traditional African materials. It was abandoned in the early 1900s due to fear that termites would destroy it.

The fourth building was constructed between 1900 and 1904 with earthen brick walls and a thatched roof. The church opened in 1904 with an estimated 10,000 people in attendance. The congregation included Kabaka Daudi Chwa II. Sadly, in September of 1910, the roof was gutted by a fire which started when lightning struck the building. Within less than thirty minutes, the entire roof was destroyed and the church was ruined. What followed was the current church of modern constructed using earthen bricks and earthen roof tiles.

The interior is simple and soaring. Its steeply arched ceiling is supported by wooden beams and trusts. The small cemetery contains the graves of previous bishops and the bodies of martyred missionaries. 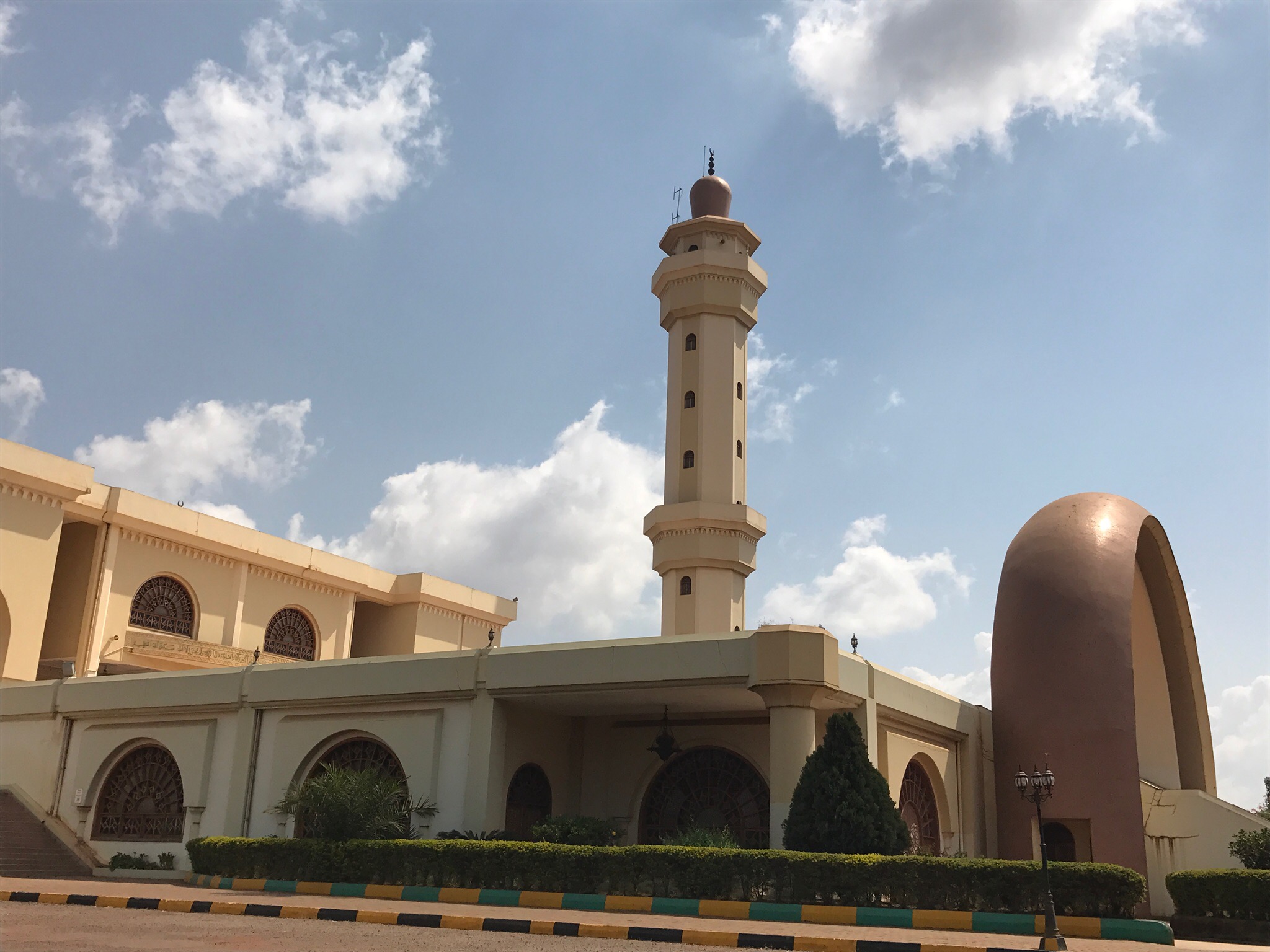 The Uganda National Mosque is located atop Kampala Hill with a wonderful vista of Kampala. Completed in 2006, it seats up to 15,000 worshipers and can hold another 1,100 in the gallery, while the terrace will hold another 3,500. Libya’s Colonel Muammar Gaddafi commissioned the Sunni mosque as a gift to Uganda’s Muslims. It was opened in June 2007 under the name Gaddafi National Mosque, and housed the head offices of the Uganda Muslim Supreme Council. It was renamed “Uganda National Mosque” in 2013 following Gaddafi’s death as the new Libyan administration was “reluctant to rehabilitate the mosque under the old name.”

Colonel Muammer Gaddafi successfully achieved a bloodless military coup and seized power from the ruling monarchy. He governed Libya for 42 years, the last years as the “Brotherly Leader of the Great Socialist People’s Libyan Arab Jamahiiya.” He started out as an Arab Nationalist but came to rule more as a dictator according to his own rules and ideology. His goal was to remove foreign “imperialist” influence from Libya Gaddifi introduced sharia law and nationalized the oil industry, using the money for the military and to fund revolutionary conflicts and militants around the world. Popular with Cuba, Egypt, Russia and other militants, Gaddafi’s “cult of personality” earned him a status of an international pariah in the Western world.

A hostile relationship developed with the U.S., resulting in the 1986 U.S. bombing of Libya and UN economic sanctions. Gaddafi sought rapprochement with the West but during the Arab Spring in 2011, an anti-Gaddafist uprising broke out, resulting in Civil War. Critics called Gaddafi a butcher, cruel, arrogant, and stupid and Western governments presented him as the “vicious dictator of an oppressed people”. During the Reagan administration, the U.S. regarded him as “Public Enemy No. 1”.

Gaddafi claimed that he disliked this personality cult, but that he tolerated it because Libya’s people adored him. That adoration ended when NATO backed rebels hunted him down in October 2011, killing him sort of like the chimpanzees tear apart the Colobus Monkey for dinner.

The mosque is quite impressive with its five domes and 166′ minaret. The climb up the minaret affords wonderful views of the city and domes. To enter the mosque, I am given a head scarf and wrap-around skirt to cover an already hot body.

The interior is simple in decoration with a high central dome and many tiered and filigree chandeliers made in Egypt, carpet made in Turkey, stained glass from Italy, and tiles from Greece. Our exuberant young guide literally sings with delight in telling the story so his mosque and religion. He refers to it as the Gadaffi Mosque and takes great pride in his beautiful building. 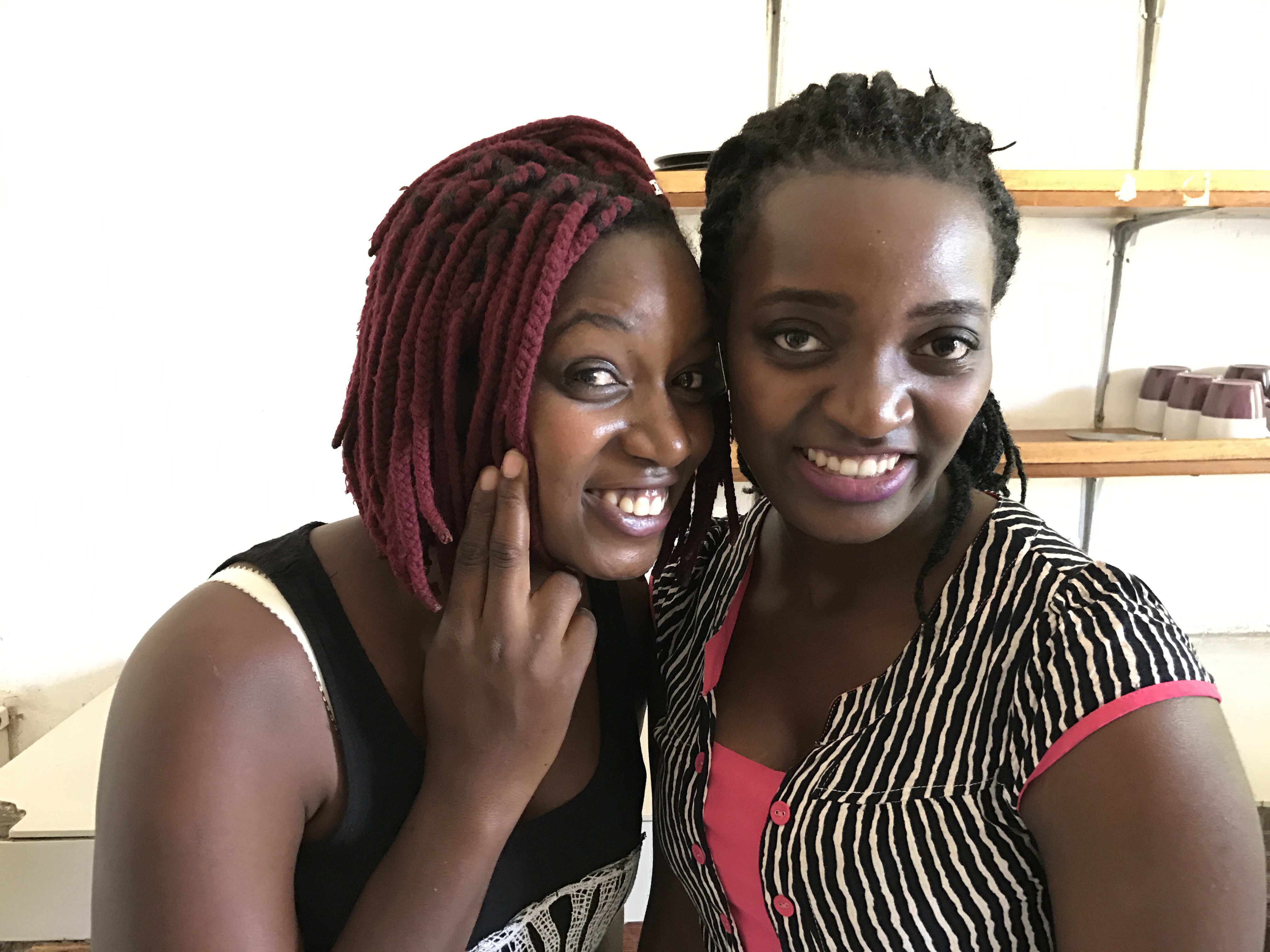 Our hostesses show us about the orphanage.

My suitcase is loaded with the weight of pencils, erasers, colored pencils, stickers and gifts for our afternoon visit to the Abetavu Children’s Village. This orphanage was started by a Canadian woman and her Ugandan husband. After seeing young children on the street with no one to help or feed them, they decided to do something. They adopted 6 orphans and the family has been growing ever since. ElderTreks was the main sponsor to build their house and continues to financially support them.

We spend an afternoon at the compound, meet the children, eat lunch and are shown around by the young teachers and assistants. The children are energetic and fun. The house and its sponsors create a warm and caring environment for over 20 children.

And then, in sweltering heat in the high 80s, we challenge the organized chaos of Kampala traffic, dodging bicycles, motorcycles, women carrying everything from firewood to groceries on their head, goats, children and chickens. The markets are packed with thousands of colorfully clad locals bargaining for dinner or a new pair of shoes. The roundabouts are insane, the streets bumper to bumper.

So glad for my driver. So happy to arrive at our beautiful hotel, Emin Pasha, and have a cold Nile Special.