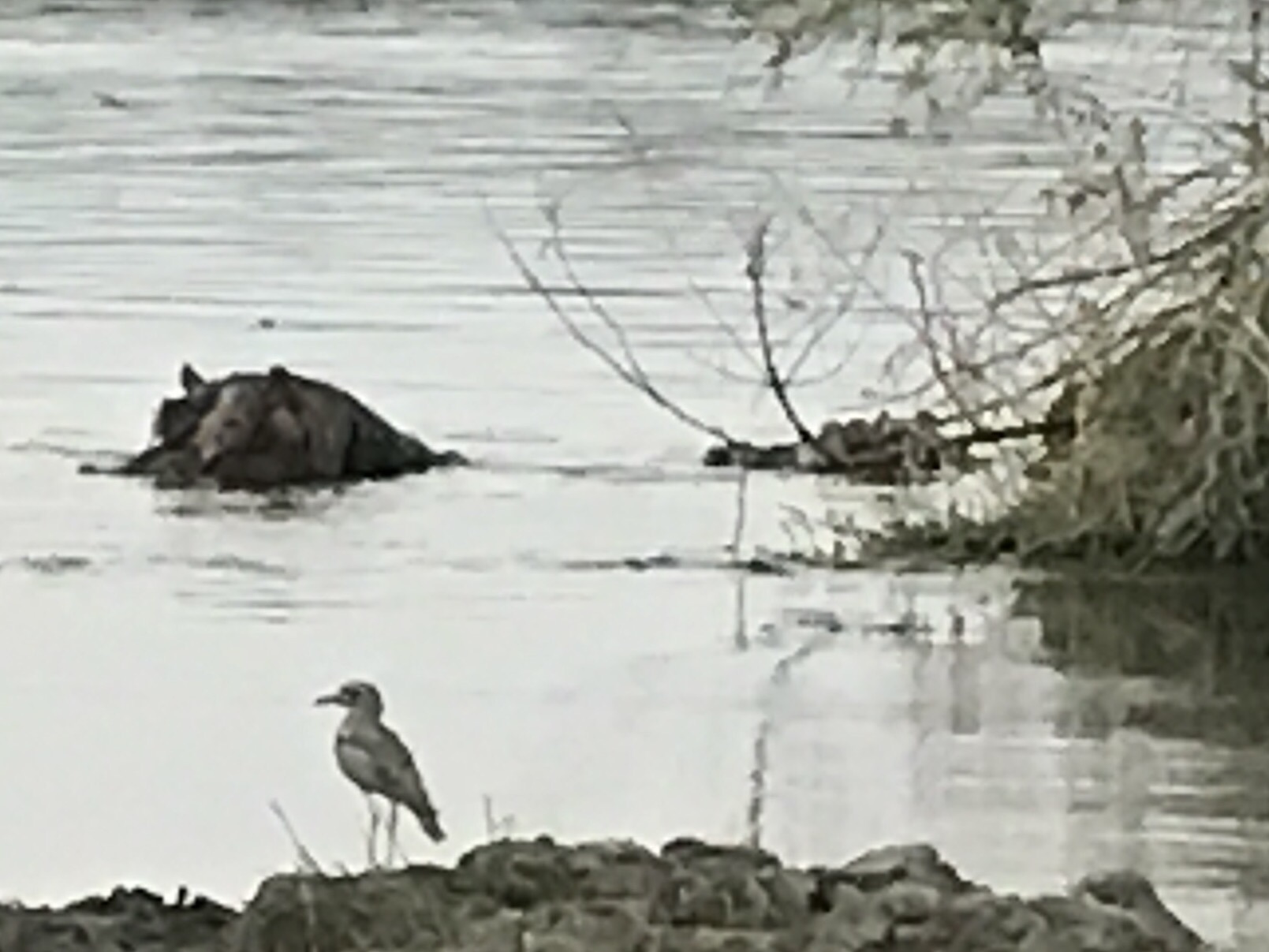 Peeking eyes and twitching ears steps from my tent.

I awake to hippo eyes and twitching ears poking from the river in front of my room. I am eager to go in search of that “Disney Matterhorn” moment. But instead, I hope to see some of these massive hippos on land.

Early morning, we set off on our safari by boarding a car ferry to cross the Nile. The river is calm and about a quarter mile wide. Once on land and fighting off a rather aggressive and persistent baboon, an ubiquitous monkey in these parts, we drive our pop-top jeep rovers into the rolling savannah.

The very first thing of note is the huge expanse of burned grasslands. Nightly controlled burns are talking place to remove the tall dead grasses and allow new green grass to sprout for the many grazers who live here. This explains the fires along the nighttime horizon and the constant smoke in the air. It is the dry season and the animals depend upon the Nile which cuts through the middle of the national park. It makes spotting many species easier. 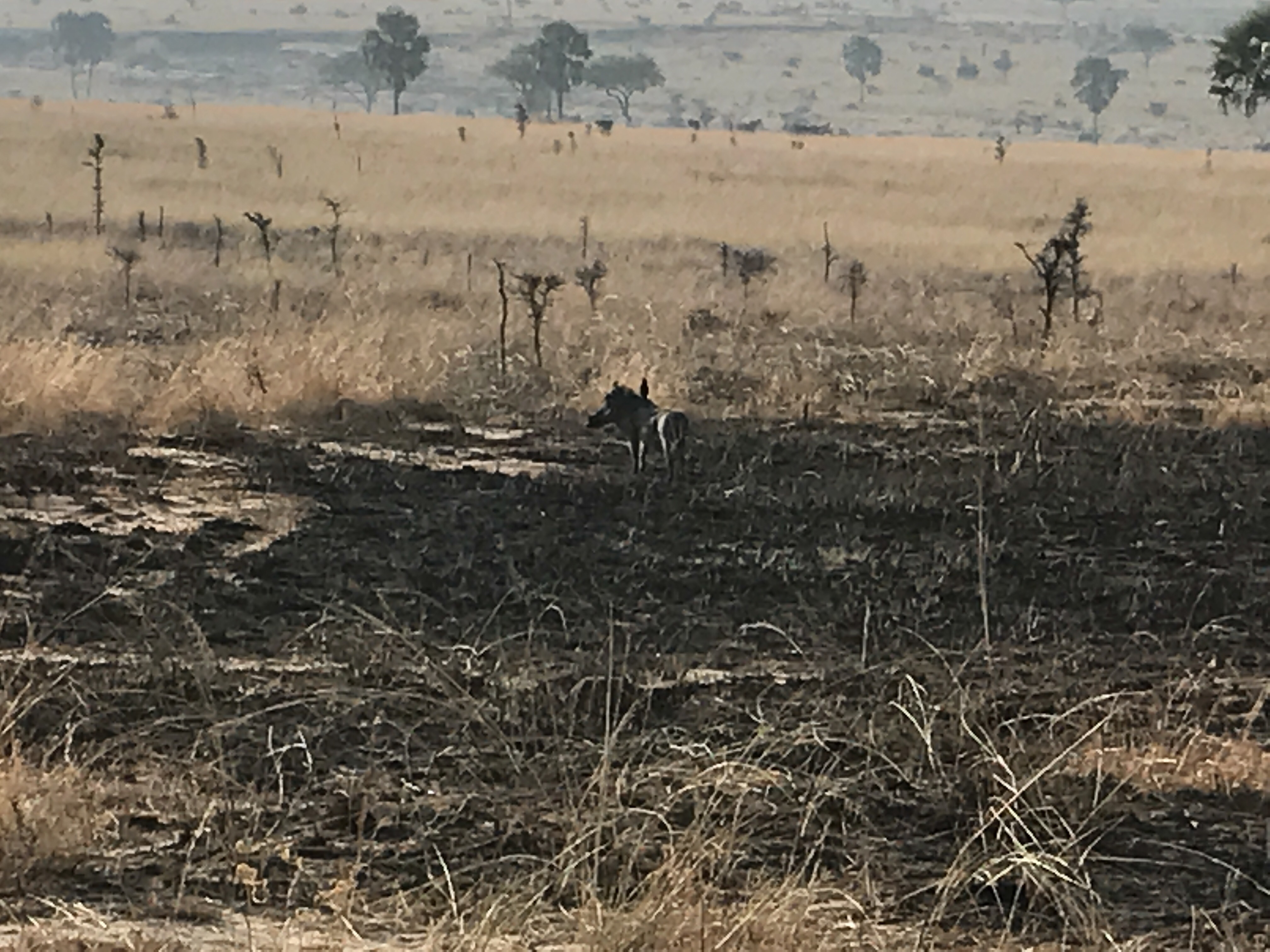 The huge expanse of the national park extends over gently rolling savannah for as far as I can see. Miles of open terrain, bush, acacia and and other trees afford the animals food for foraging and respite from the heat. Once, 18,000 elephants inhabited this park but now just 1000 remain. This tragic loss of animals came during the times of Idi Amin. Though Amin has been gone since 1979, we can still see the effects of civil war even today. Shattered remains of once luxury lodges and the loss of animals that were killed or left at the mercy of poaching speak ill of Amin’s reign of terror.

After over 70 years under British rule, Uganda gained its independence on 9 October 1962, and Milton Obote became the first prime minister. By 1964, Obote had allied with Amin, who expanded the Ugandan Army. Both were later accused of smuggling gold and ivory from Congo, later trading them for arms. Obote suspended the constitution and proclaimed himself executive president. Shortly thereafter, Obote sent Amin to dethrone King Mutesa II who ruled the kingdom of Buganda. (I saw his tomb in Kampala.)

Eventually, Obote began to question Amin’s loyalty and ordered his arrest. However, Amin staged a coup in 1971, seized control of the government and forced Obote into exile. Once in power, Amin began mass executions upon Christian tribes that had been loyal to Obote. He also began terrorizing the general public through his various internal security forces whose main purpose was to eliminate those who opposed his regime. During Amin’s ruthless eight-year regime, an estimated 300,000 civilians were massacred. Expulsion of Asian citizens along with increased military expenditures brought sharp economic decline.

When the Popular Front for the Liberation of Palestine (PFLP) hijacked an Air France flight from Israel to Paris on 27 June 1976, Idi Amin welcomed the terrorists and supplied them with troops and weapons, but was humiliated when Israeli commandos subsequently rescued the hostages in a surprise raid on the Entebbe airport. In the aftermath, Amin ordered the execution of several airport personnel, hundreds of Kenyans whom were believed to have conspired with Israel and an elderly British hostage who had previously been escorted to a nearby hospital.

Over time, the number of Amin’s intimate allies dwindled and formerly loyal troops began to mutiny, fleeing into Tanzania. A civil war broke out between the two armies. In 1979, Amin was forced to flee when Kampala was captured. He sought refuge in Libya, but later moved to Saudi Arabia, where he lived comfortably until his death in 2003. 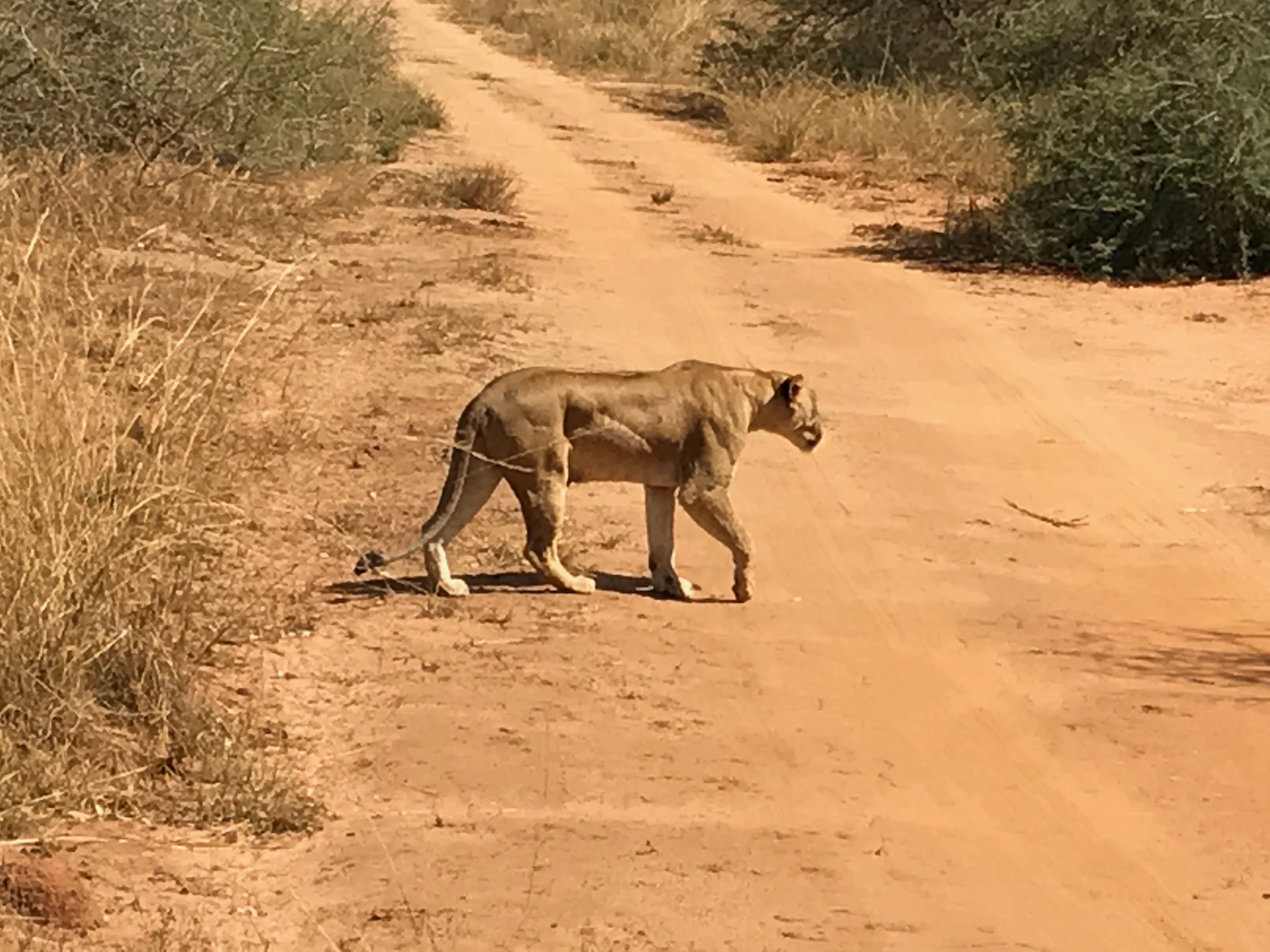 Our game drives are far from disappointing. We observe herds of numerous types of antelope, a jackal who rests not five feet from an antelope, many water buffalo, several Rothschild Giraffe with their distinctive white legs, numerous warthogs, a small pride of female lions with their young cubs, several monkey species including the aggressive baboon, and many elephants. A highlight was parking the jeep among a group of at least 50 elephants lumbering across the road and toward the Nile Delta. One frisky youngster stood his ground, protecting his younger friend, displaying behavior of which any father would be proud.

Our drive uncovered more than four-legged mammals. The birding was excellent and many colorful feathered friends were spotted. With hundreds of species to see, the bush and treetops are never a dearth for birds. And with birders on board, our stops are frequent. 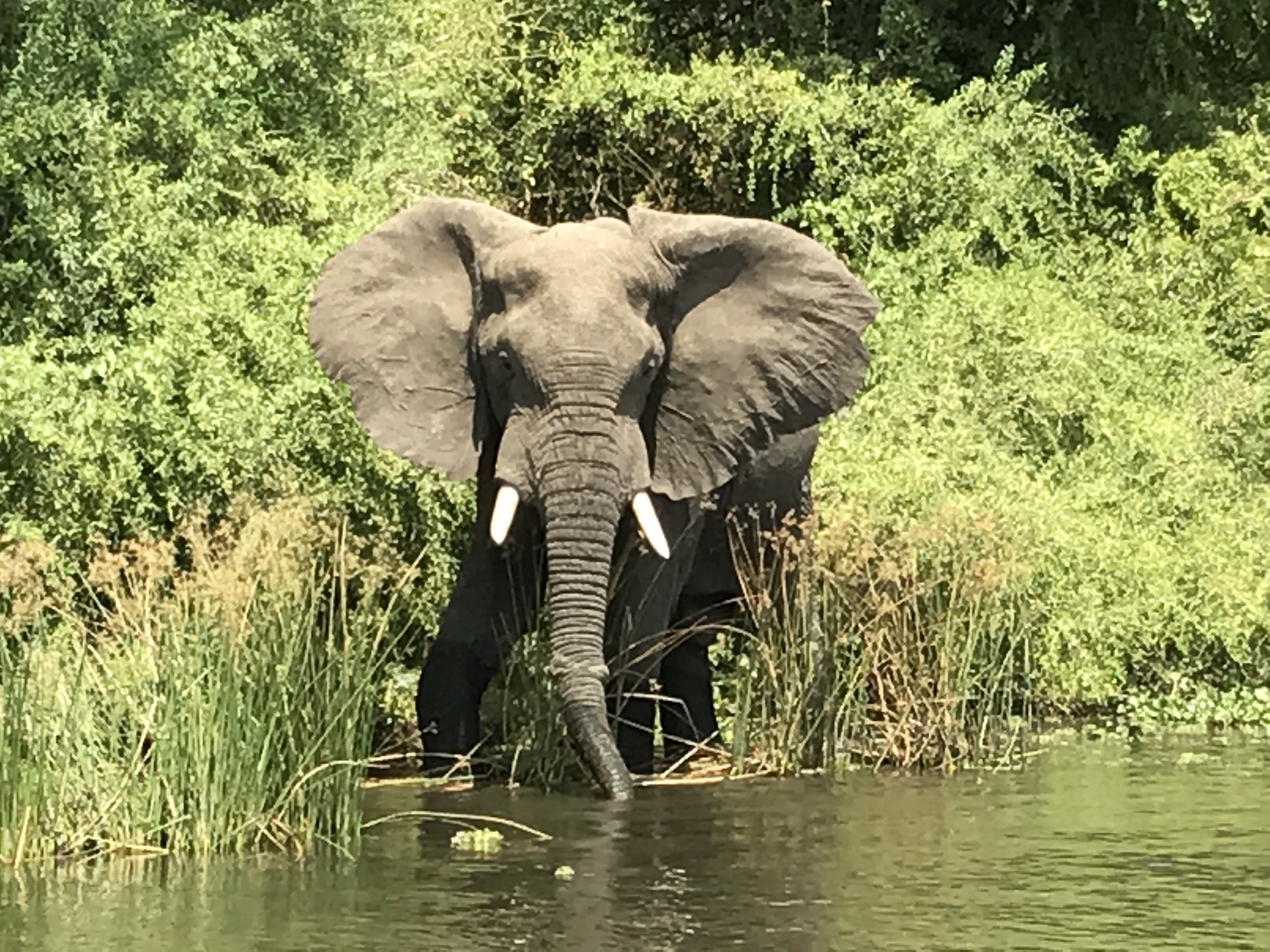 In the afternoon, we board a small private boat to journey along the Nile and through the Delta where bird and animal life are abundant. Gliding past countless submerged hippos, eyes and ears twitching above water, these shy behemoths duck underwater as we approach. Many birds take advantage of the red clay cliffs to nest in a bank of holes resembling Swiss cheese. Riverbanks team with waterbirds from Kingfishers and hornbills to storks and herons. A large number of Grey Crowned Cranes, Uganda’s national bird, are spotted along the banks as they dance their mating rituals. Awesome to see the herds of elephants feeding and watering along the shore.

We are very lucky and spot the elusive but distinctive Shoebill standing along the shore. 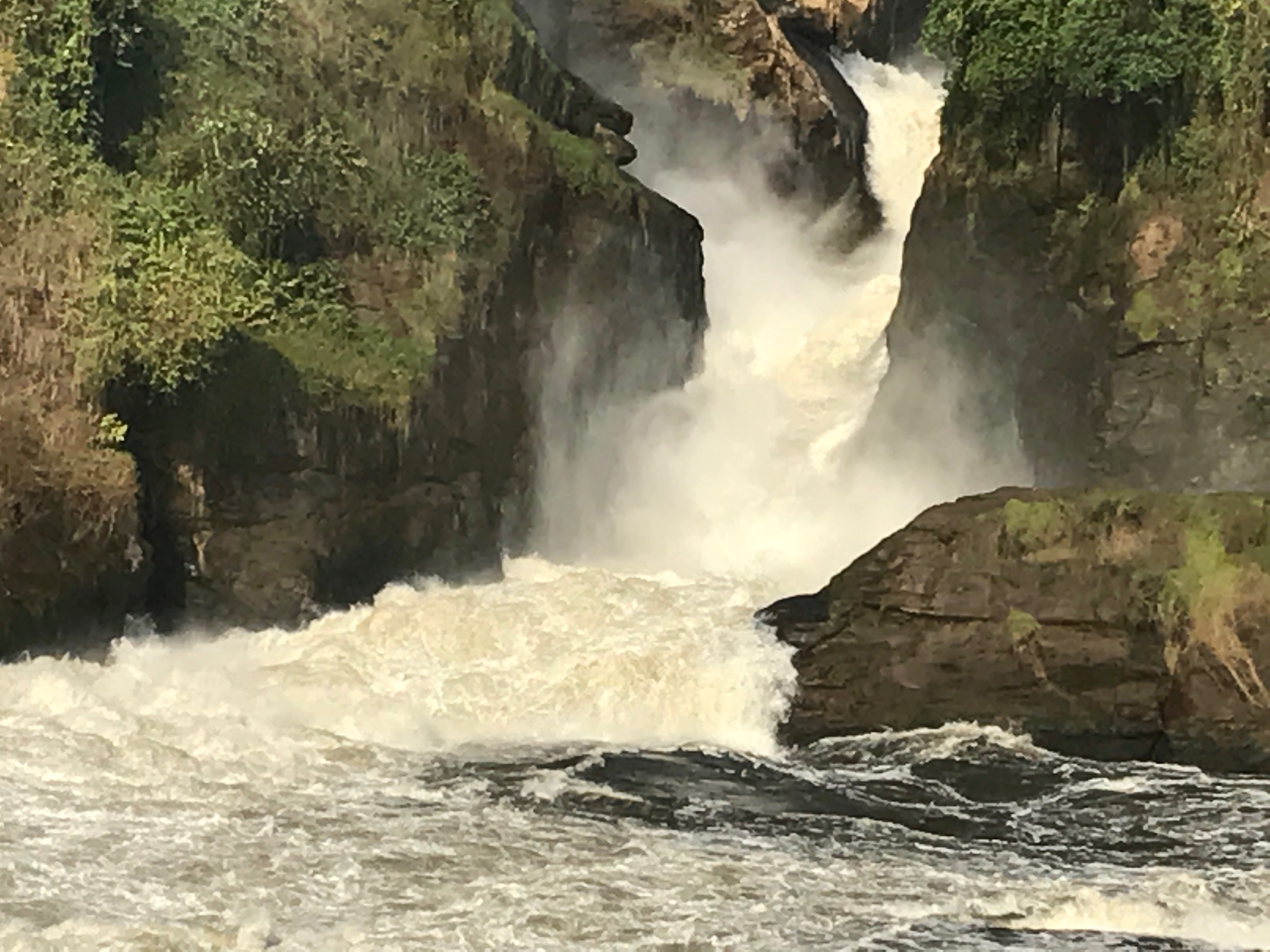 Murchison Falls is where the Victoria Nile explodes through a narrow gorge and cascades down to become a placid river enlivened by hippos and crocodiles, waterbucks and elephants, buffaloes and waterbirds. The vegetation is characterised by savannah, forest and woodland.

I climb to the top of the falls for a magnificent view of the wide river as it gushes through a narrow slit of about 23’ wide and thunderously roars in a torrential waterfall as it crashes some 141’ below. The resulting mists create a colorful rainbow. From the top, I can look westward all the way to Lake Albert.

Leaving the top, which is a relatively easy climb, we scale the side of a hill via a “shortcut” to follow a trail of several hundred steps which leads down the other side. We stroll through pleasant forest with the thundering falls in the background. At the river, we board our boat to take us up the Nile and back to our lodge. The shores are teeming with wildlife and birds.

Murchison Falls National park is in the northern part of the Albertine Rift Valley. In 1926 the park was dedicated to protect the precious savannah grassland and its wildlife. Since it has hosted prominent international visitors like Winston Churchill. In 1951, background scenery of Murchison Falls and Lake Albert was used in shooting Humphrey Bogart in John Huston’s “African Queen.”

In 1954, Ernest Hemingway also visited the waterfalls, though his plane crashed just below the Falls. Hemingway and his wife survived and while flying to a nearby hospital, he suffered a second plane crash. A rather unlucky trip for this great writer and game hunter.

I enjoy sunset over the water as we return to our lodge. It is soon so dark I cannot see my hand in front of my face. Stars are brilliant in the sky. The night sounds of birds and mammals hang in the air. As I am escorted to my tent in the pitch blackness, I hear hippo grunts and splashes nearby. A shadowy blob moves near the room. A baby hippo the size of a large brown bear lumbers past our deck.

Sipping sherry and listening to hippos! Mother Nature and tent camping can’t get much better than that.