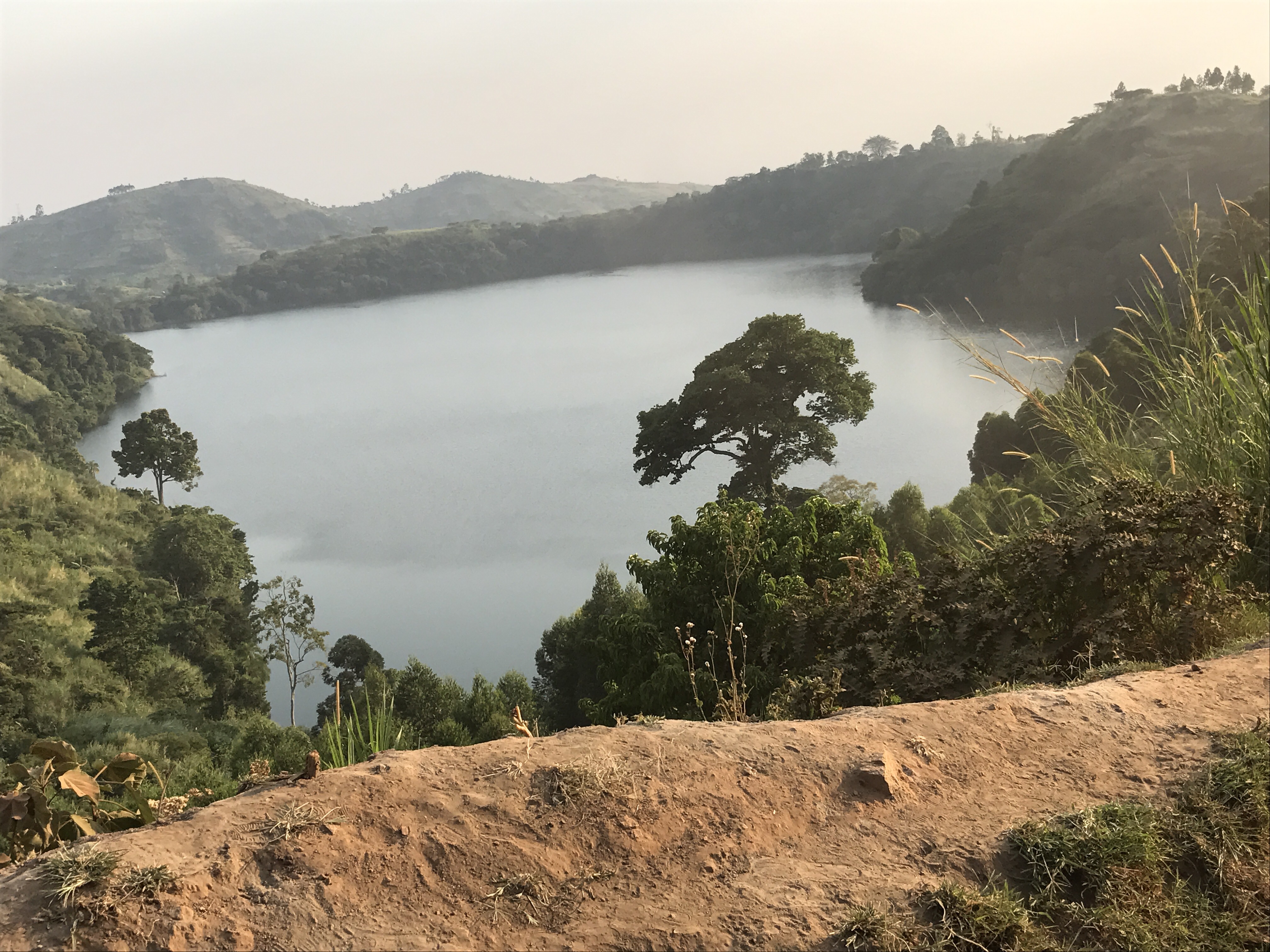 My roomie Nancy is an Olympian! Wearing a Nike Fuel Band, she typically earns after a normal day and exercise class, 2400 fuel units. Today, riding the roads of Uganda, she was congratulated for her achievement of 4400 fuel units. All for surviving the bumps and grinds of Ugandan roads.

Truly, having traveled for 10 hours from Murchison Falls to Kibale, I sing “The road is long, With many a winding turn, That leads us to who knows where…But I am strong, We’ll get there….” Neil Diamond must have travelled with Nancy upon the roads of Uganda.

Eldertreks told us “Today we have a long drive….” They did not lie. Our rovers take us over red dirt roads for at least 120 miles where pot hikes and ruts would rip the mufflers off a nor,al vehicle and the speed humps are the size of baby hippos. The corrugated roads are almost a relief. Tar road is almost nonexistent, just a short stretch to tease us that bouncing and jerking as ended. To describe the road as “primitive” would be kind. Add to the jarring ride the fact that everything is dry. Smoke, dust and other pollutants limit our views. Occasionally, the dust blinds our vision. And it is HOT.

I am getting grumpy and dreaming of alcoholic relief. 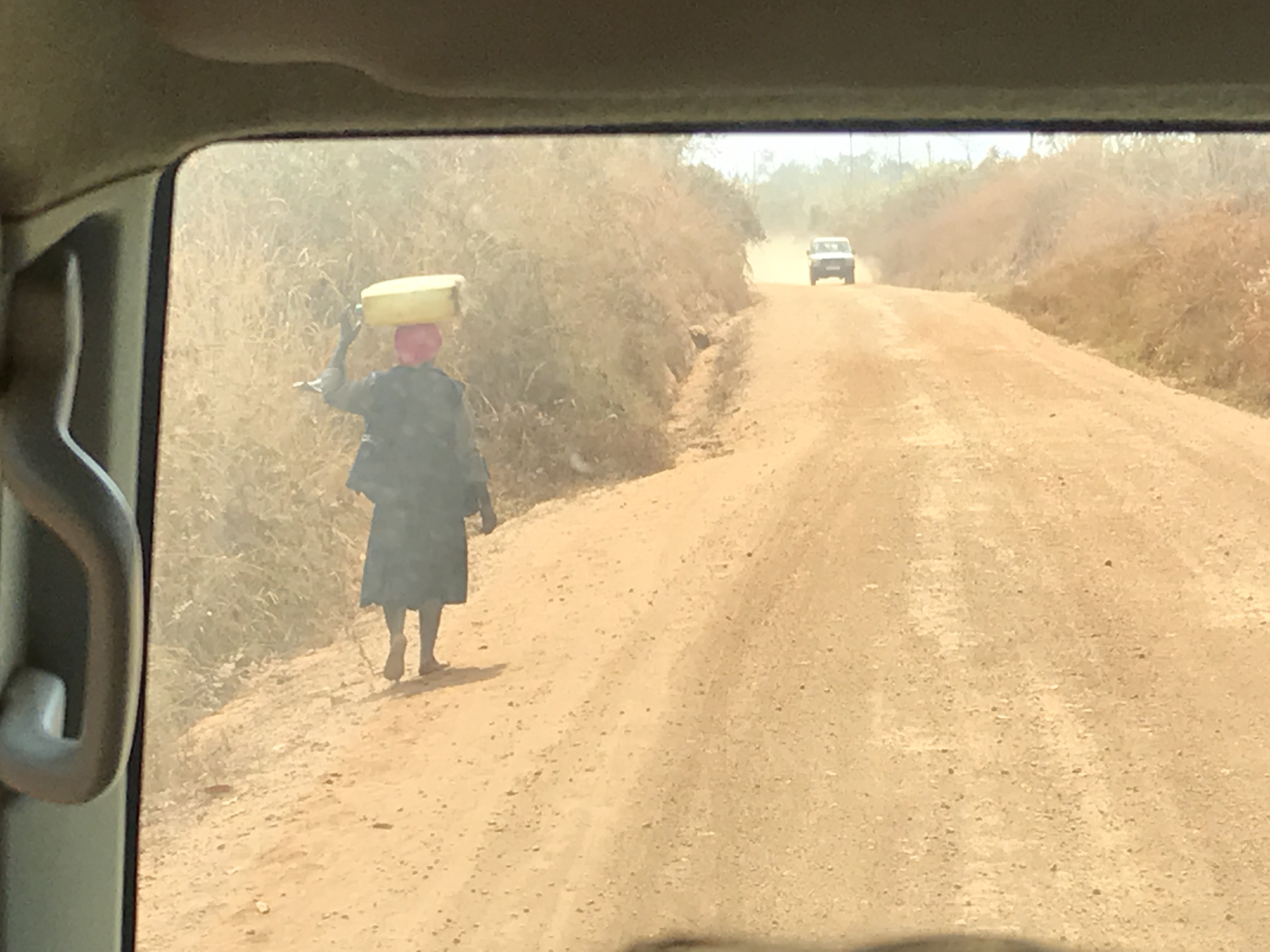 We experience a nightmare drive of 180 miles on this, their main highway! It is not that distant in miles but in Ugandan time too long. The best part of the ride is we are see the people and life of Uganda. Villages come and go, markets swarm with colorfully dressed shoppers and entrepreneurs. Motorbikes are loaded with everything from mattresses to firewood, chickens to the entire family. “Any load on the road.” People are walking great distances, or herding their beautiful longhorn cattle. I spot lots of young children as school is still in recess. Meanwhile, long lines are n the schoolyards where children and parents line up for immunizations.

Roads are lined with people, motorbikes, cows, bicycles, cattle, goats, overcrowded taxi vans, and lively markets. The Chinese are remaking g this dirt road and transforming it into a major throughway. I applaud the though but contemplate how it will change the lives of these people. If I return in five years, will that telephone kiosk by an Apple Store, that two-table cafe be a Macdonalds, or the little tea bar be reborn as a Starbucks? Modernization is a blessing, capitalism more of a sin.

We brake for cows, birds for our birders, a couple ‘bush stops’ and a picnic lunch. In late afternoon, we climb down from these high-profile rovers and walk along the red dirt road. The exercise is delightful. The only bounce I feel is in my step. We pass fields of maze, men carrying machetes, a few village huts made of natural materials, free-range chickens and goats. All the villagers come out to watch. They must think these 10 pale Europeans are crazy.

Our drive eventually takes us into the mountainous tea plantation area of Kibale. As the elevation increases to as much as 5000 ft. the air cools. The scenery is bright green, groomed and spectacular as acres of tea plants cover the mountainsides for as far as I can see. Men and women with large baskets are walking to the fields preparing to handpick leaves. Big machinery has not reached the smaller plantations.

This is Crater Lakes country. A crater lake is a lake that forms in a volcanic caldera. Crater lakes covering active volcanic vents are sometimes known as volcanic lakes, and the water within them is often acidic.Lakes located in dormant or extinct volcanoes tend to have fresh water, and the water clarity in such lakes can be exceptional due to the lack of inflowing streams and sediment.

Uganda’s crater lakes region lies in the western part of the country in the Albertine Rift Valley near the Congo border. There are 86 crater lakes that surround this area. It is believed these lakes were formed during extremely violent volcanic explosions about 10,000 years ago. Most of the craters are now extinct, though some release the smell of sulphur. 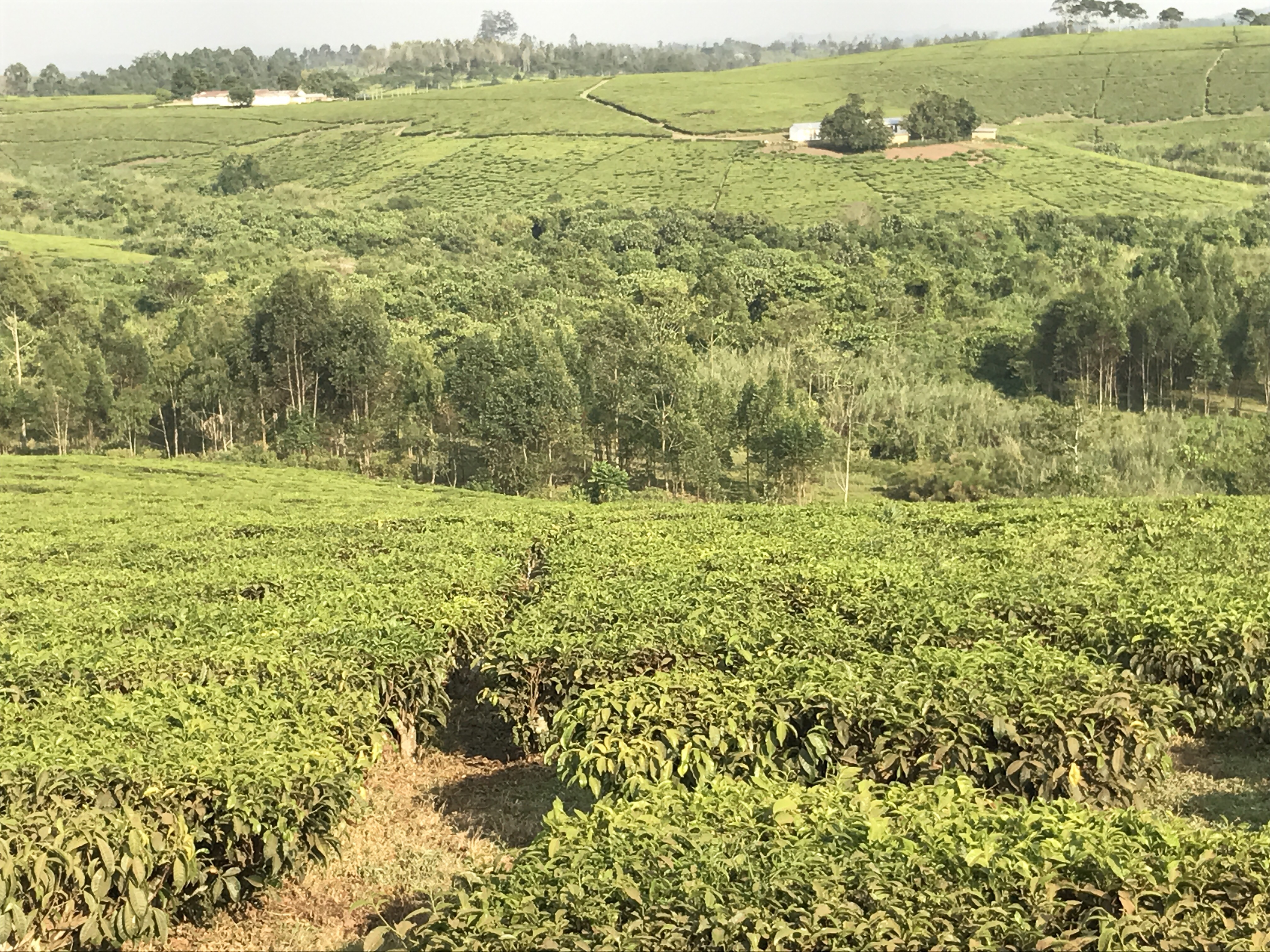 This lush region is divided into four lake clusters: Fort Portal, Katwe-Kikorongo, Bunyaruguru and the Kasenda-Ndali area where our lodge is situated. Kasenda-Ndali has sweeping views of numerous tea plantations and is the locale for the ‘Ndali view’ of a picturesque tree framed by crater lake Nyinambuga that appears on the Ugandan 20,000 shilling bank note. This area also has the highest number of lakes. The surrounding dense forest hosts a variety of birds and monkeys. And chimps! Which is the reason we endured 10 hour on the road to get here.

With immense relief, we arrive at the lovely Ndali Lodge. Owner Aubrey and sweet puppy Basel greet us with typical Ugandan hospitality. The compound is atop the rim of Nyinambuga Crater and open to cool breezes with spectacular views of the surrounding forests and lakes. Lake Nyinambuga lies to the east and vistas of lakes and the Rwenzori Mountains lie to the west. Parts of these mountains are considered the Afro-Alpine Zone. Don’t see snow on their 4800′ peaks but the cooler temperatures are appreciated.

The lodge’s only source of light is candles, my room just a little brighter. The blackness of the night, its brilliant stars, the sounds of monkeys and the turbulent flight of the Hornbill are a delight. In the morning, we sip coffee on our patio and breakfast watching the sunrise above the caldera.

Excitement increases as we plan for our journey to Kibale Forest National Park, home for large groups of chimpanzees. Unlike the chimps of Entebbe’s Ngamba Island Sanctuary, these chimps are independent and wild.

My kind of relative.