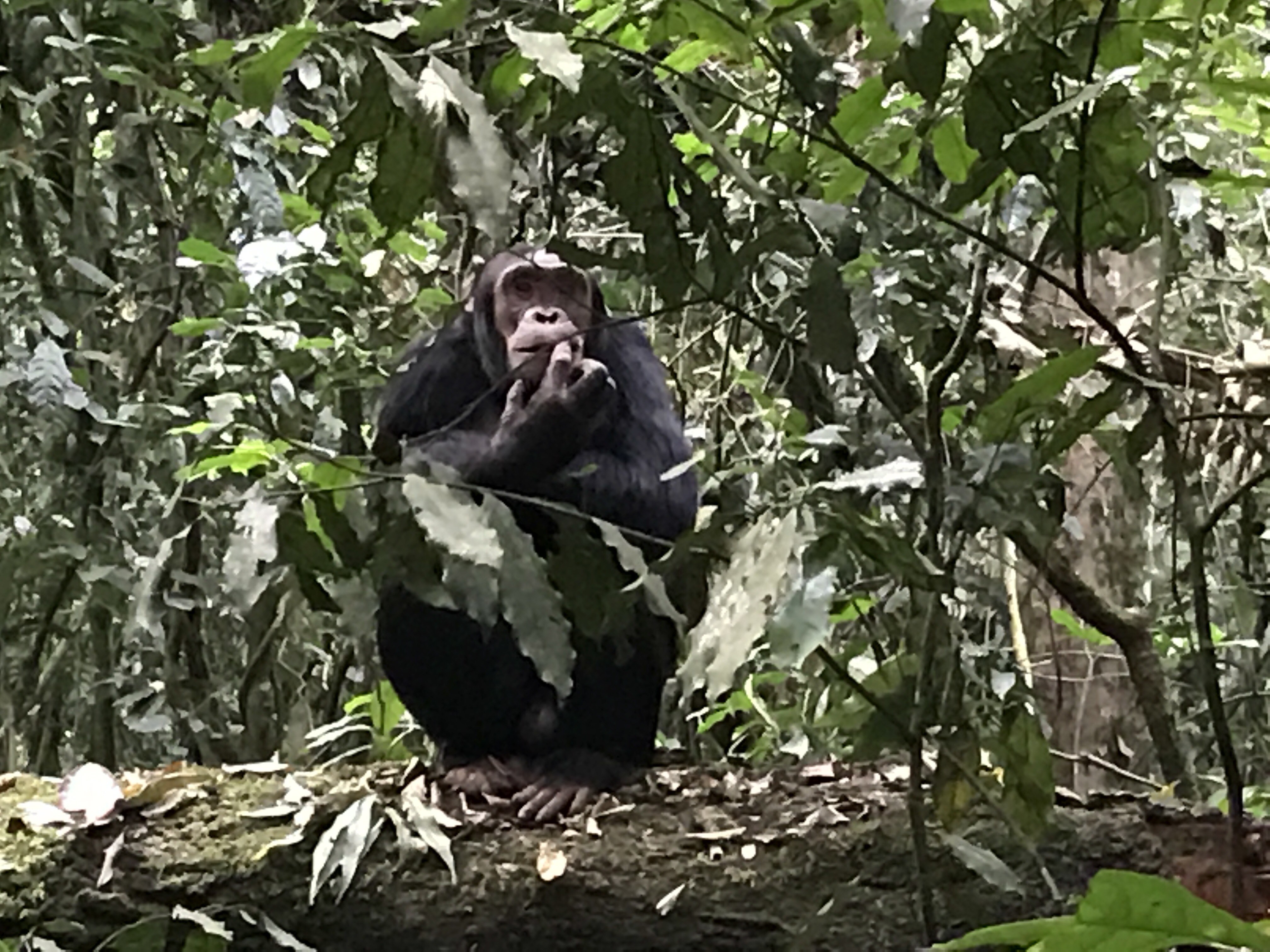 I met Totti and Uluru today. They are chimpanzees living in the Kibale Forest of Uganda. Its tall canopy of fig trees provides most of what they need from food to branches and leaves for nests. I am trekking this marvelous forest in search of its unique flora and fauna. Seeing me, Totti and his young friend climb down from their treetop. It seems Totti wants his belly scratched as he rolls over and lazily stretches to his full height of 48 inches and more. He’d make a good center for the Knicks. Arms outstretched, nonchalantly kicking back, Totti’s yawn displays his giant canines. I wisely chose not to accommodate him and stand my distance.

By last count, there are about 5000 Chimpanzees remaining in the wilds of Uganda. Appropriately 1500 live in the tropical forest of Kibale National Park. Here they are allowed the freedom to thrive and live free from interference. The diversity and number of primates in Kibale is the highest in Africa but it is the protection of the 13 species of endangered chimpanzee for which Kibale is known.

Southern Kibale borders Queen Elizabeth National Park and collectively these two preserves maintain a 110 mile long migration corridor for wildlife that stretches from the remote southern sector of Queen Elizabeth National Park to the north of Kibale. Kibale’s tropical forest is known for a wide variety of evergreen and deciduous trees which offer a canopy of over 150 feet. A variety of ferns, shrubs and forest grasses create a sparse and maneuverable undergrowth.

I am startled by the thud of rushing feet and hands. Friend Kakara is charging through the forest, slapping tree trunks with a loud ‘thunk’ as he passes. A couple other chimps crash through the underbrush, unsocial and in a hurry. They vocalize their opinions as they run, slapping trees as they hurry along the path. Totti ignores them.

Totti chose to trek with me for a time, occasionally sitting down under a tree to discuss world politics and women. He appeared pensive. He looked as if he could have posed for Hugo Rheinhold’s “Affe mit Schädel” but of course he is much too young for that. At about 23 years old, he would have been just a twinkle in his great grandfather’s eye in 1893.

Totti aspires to be the Alpha male of his family group. He seems patient but resolved. His bravery is unquestionable for while some chimps remain in the treetops, Totti is unafraid to mingle among these Homo sapiens who come to visit the forest. His friend Uluru, who sticks close and assists with grooming and relaxing, also feels Totti has what it takes to be Numero Uno among the clan.

I asked about the baboons that seem to be everywhere, even along the road outside the park. Totti is distainful of baboons, thinking they are inferior to him. Well, actually they are generally breath chimps as baboons prefer to sit on the ground, along the roads, sometimes stealing food. Totti says baboons have a nasty attitude and are undeserving of his respect. He also mentions that baboon meat sometimes finds its way onto his dinner menu, along with many fruits and vegetables.

I wondered what he and his friends do all day? Totti explained they generally slept in the trees for a large part of the day. He prefers the views from the high canopy where he finds some of his favorite fruits. His favorite? “Figs are good and I never tire of them,” he responds. So is that figs and leaves I see raining from the trees?

“Well, no, not all the time. I would suggest you not stand under the brown or wet stuff raining down,” he replies with an impish grin.

At 23, Totti is young for a chimp. He is tall and very strong, probably weighing as much as 170 lbs. Many chimps in the wild, especially here at Kibale, will live 50-55 years or more. There are many chimp families who live in this huge forest but only 130 chimpanzees have been socialized to accept visitors in their presence. Totti doesn’t mind the disturbance. In fact, he finds it amusing to watch the upright man struggle and stumble over the roots and through the vines of his forest. Chimps and other forest neighbors, like the elephant, try to create easier paths for us but it seems we humans are just too clumsy to glide through thick forest. Even the youngest baby chimp can get around the treetops with ease. If they must come to ground to scoot to a favorite spot or meet friends, his chimp buddies easily leap and run through the brush.

Totti hears a hooting call from the other side of the forest. It is time to congregate elsewhere. He hesitates, not only because he is the up-and-coming bigshot and doesn’t want to appear too eager, but also because it is cool and relaxing stretched out on the leaves and contemplating the clouds above. He enjoys watching Homo sapiens and learning their behaviors.  ﻿

He notes that our guide carries a firing stick and doesn’t like it. Totti realizes it is for scaring off elephants, and that is okay as he is not partial to elephants. However, he does not want the guns fired in his forest. It scares the young chimps.

I mention what a wonderful umbrella the canopy makes. Uluru explains that the canopy is good but does not stop all the wet stuff. He doesn’t like wet and when it rains he and his friends stay in the trees. “I don’t like getting my feet wet,” he explains. 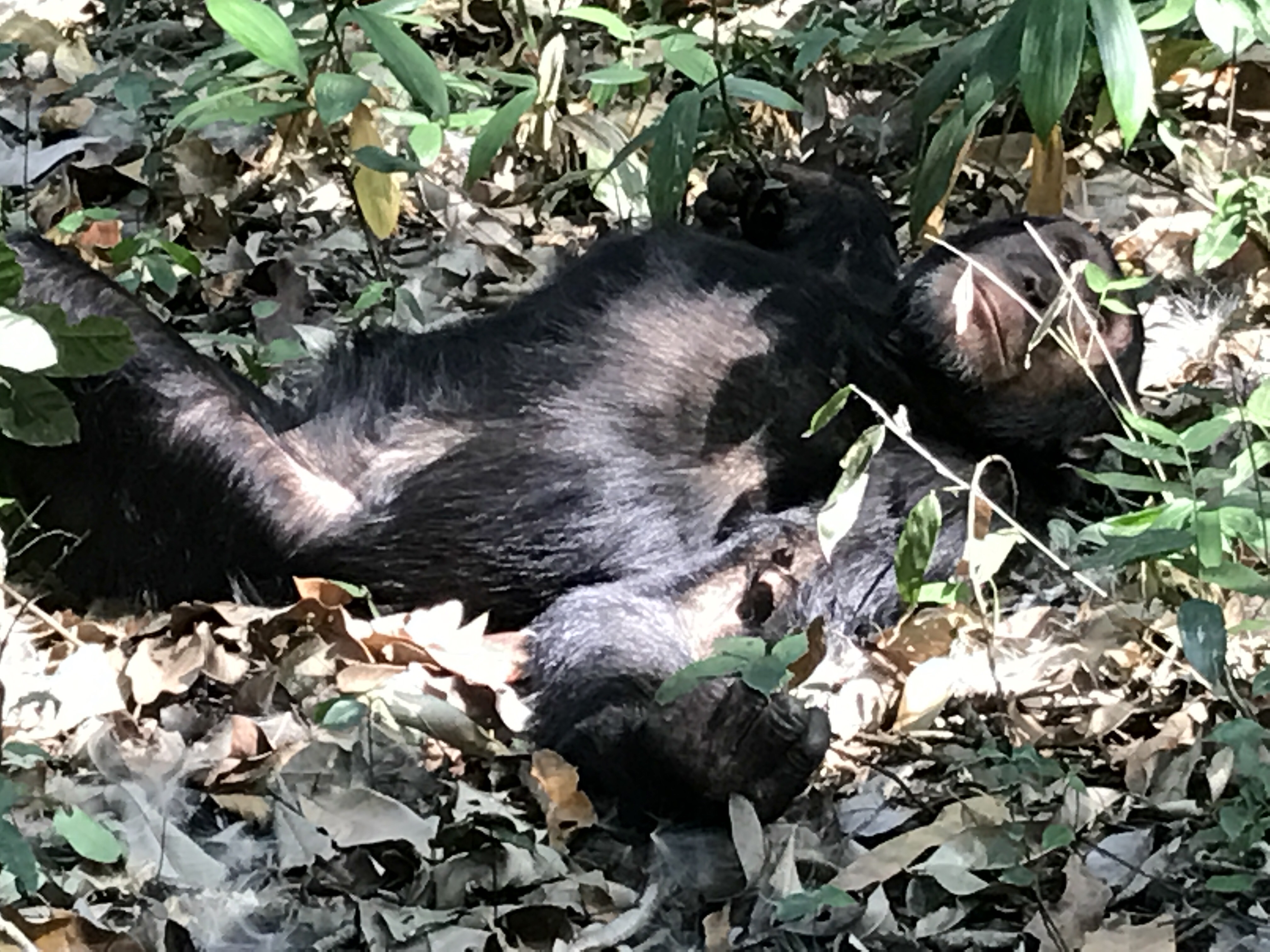 Totti relaxes and dreams of being Alpha male

It is time to ask about the rumors that chimps are cranky and aggressive. Totti and Uluru both are quick to deny this. True, they don’t like us too close, keeping at least 100′ away. He grunts that distance is not because we smell but because they don’t want our colds and other illnesses. We do share 98.8% of our genetic makeup so I guess he’s right.

Explains Totti, “Just because we run by on the trail or ignore you doesn’t mean we are cranky. We are just in a hurry. As long as you step out of the way all is well. After all, it is our forest.”

It’s time to leave. Totti has been friendly and interested in his Homo sapien cousins and, and vice versa. He is a handsome chimp, destined for great things. I wish him and his family well.

Leaving Kibale Forest for my own luxury nest at Ndali Lodge, I admit this has been a wonderful close encounter of a chimp kind.