Beloved Bruges. Or Is It Brugge?

Bruges is a city that impresses from the moment one steps out of the train station. Whether I pronounce it Bruges like the French, or Brugge, the Flemish pronunciation, the city is gorgeous from every angle. Every street, square, park, and church is noteworthy and excites the senses.

Bruges is the capital of West Flanders in northwest Belgium and has been an important trading center along with its sea port of Zeebrugge since the early 9th century. Distinguished by its cobbled streets, medieval buildings and winding canals, though occupied during both wars by the Germans, the city suffered no damage. (Hitler had previously visited Bruges and so loved the city he ordered it to be protected from harm. The spiteful SOB did appreciate Art!) Thus, Bruges is an excellent example of what life was like in a wealthy and successful medieval city. And it’s city center is recognized as a UNESCO World Heritage Site. Rightfully so!

Oftentimes referred to as “The Venice of the North,” this canal-based city offers a compact, easily walkable area. Numerous boats roam the canals, and horse and buggies clip-clop along the streets. It is tempting to hang around Burg Square and nearby Markt Square, but Bruges is best wandered on foot. The entire city is surprisingly traffic-free in most areas.

In the city center is Burg Square with two exceptional buildings. The 14th-century Stadhuis (City Hall) has an ornately carved and historical exterior and an interior of carved ceilings and painted murals. The next-door Bruges Vrije has beautiful, intricately carved wooded panels commemorating Emperor Charles the Fifth. Both areas are small and take minutes to view and should not be missed.

The even more ornately carved Basilica of the Holy Blood is across the square. Up a winding staircase, you enter a chapel to observe the holy relic, said to be a piece of cloth soaked with the blood of Christ. The relic was brought to the city after the Second Crusade by Thierry of Alsace and once a year the relic is paraded throughout the city with inhabitants dressed as medieval knights and crusaders. 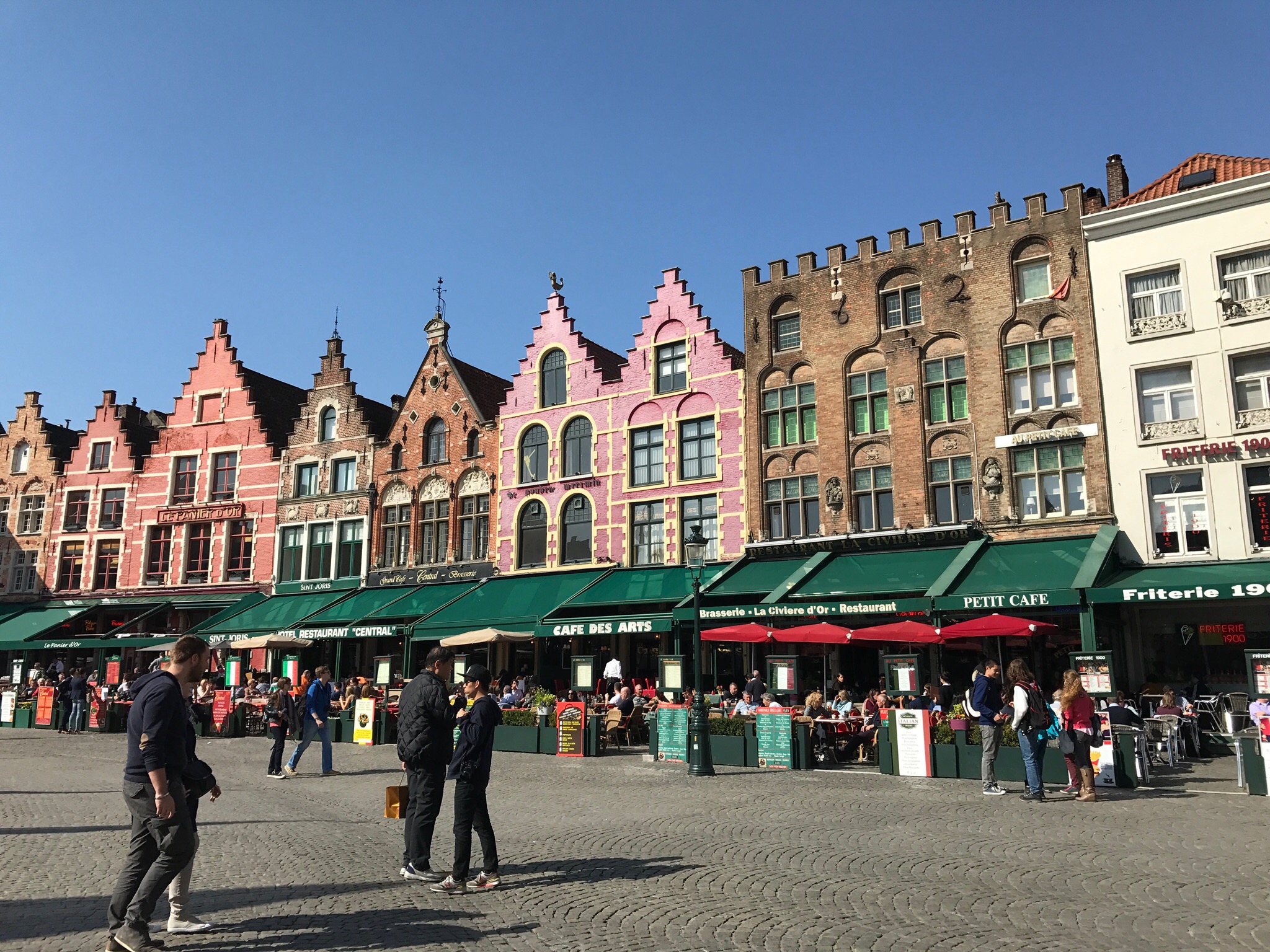 Nearby, the 2 1/2 acre (one hectare) Markt Square is the site of the Provincial Court building, last rebuilt in 1878 in a neo-Gothic style, and numerous guildhalls. But the pièce de résistance is the 13th-century Belfry of Bruges with  its 47-bell carillon and 272′ tower. The belfry originally was used as an observation post for spotting danger or fires. Today, visitors can climb the narrow, winding and steep 366 stairs to the top for superb panoramic views. The city still employs a full-time carillonneur, so while enjoying a Trappist beer, I listen to the hour-long serenade of bells entertaining Bruges as it has for centuries.

There are countless buildings and sites to visit and views to enjoy about the city. The gothic Cathedral of Sint-Salvator, under restoration but standing on this site since the 10th century, has exquisite Flemish murals and towering vaulted ceilings. 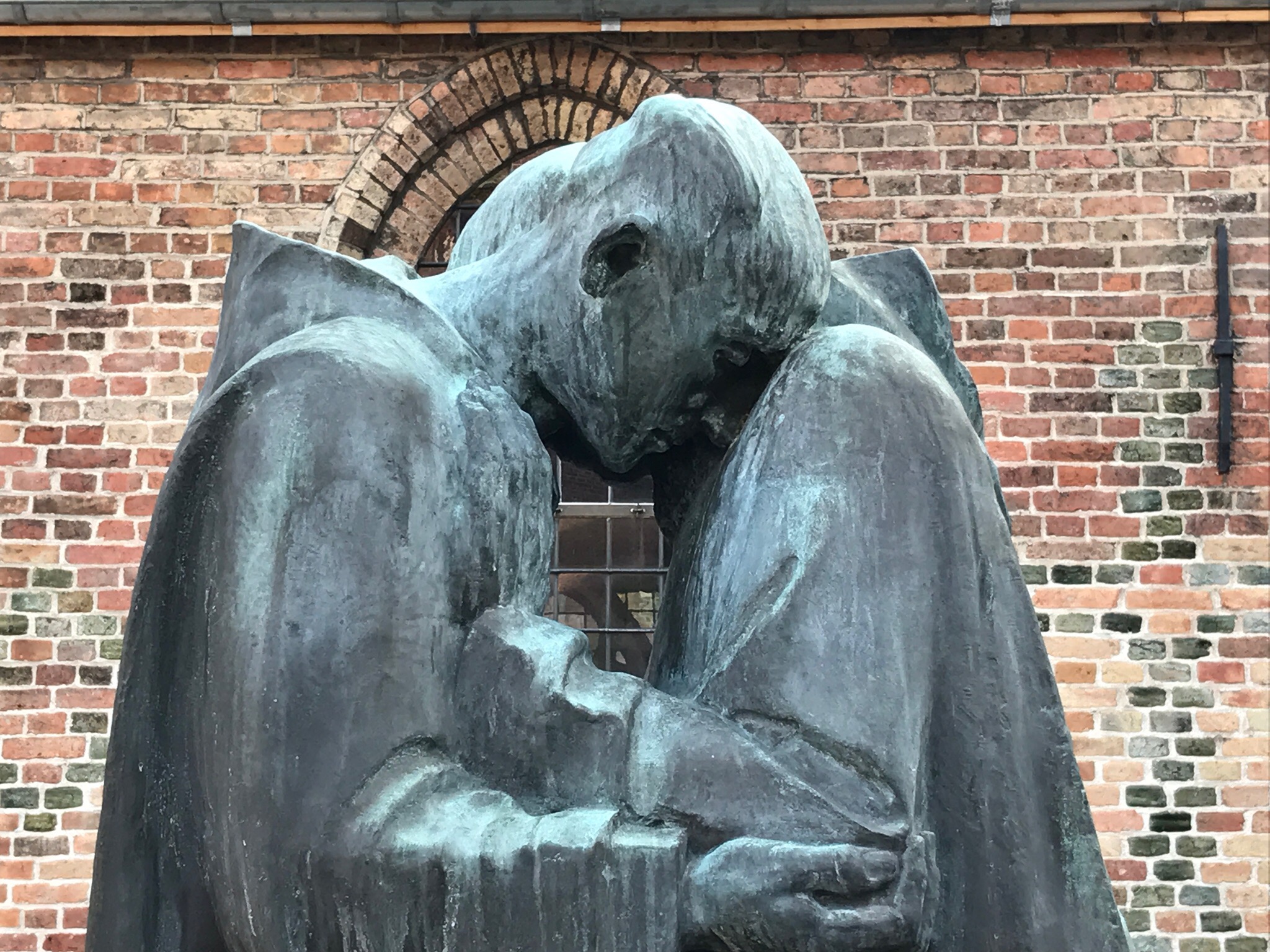 Sint-Janshospitaal, or St. John’s Hospital, is a UNESCO recognized site. Old St. John’s (there is a modern St. John’s across the city) is an 11th-century hospital mostly visited for its charming courtyard and architectural elements. There is a small museum outside of which is a wonderful life-sized statue of solace for the ailing. The last patient left about 40 years ago.

Directly across the street is the Church of Our Lady whose brick tower reaches over 400′ into the blue sky of Bruges. This makes the spire one of the world’s highest brick towers. The massive size both inside and outside makes this a very impressive structure sitting in the middle of Bruges. Unfortunately, this cathedral is also under massive renovation but the main sites, the crypt and its art, are on display.

Within a side transept is the small statue of Michelangelo’s marble of Madonna and Child, believed to be the only sculpture by the great artist to ever have left Italy in his lifetime. It was originally designed for a church in Siena but, because the Christ child was naked, which the church forbade, the statue was sold off. Through an act of fate, a local Bruges family was able to purchase the sculpture and bring it to Our Lady.

This statue gained additional fame as it was one of the priceless pieces of art stolen by the Nazis in 1944 (actually previously plundered in 1794 by the French but returned after Napoleon’s loss at Waterloo). It reached a new height of fame when it was discovered a year later buried deep within a salt mine near Hallein/Salzburg Austria, a search and discovery recently made famous by the book and movie based upon the “The Monuments Men.”

Bruges is also home to one of the several ‘communal housing projects’ known as Béguinages which are located around the Low Countries. These complexes were meant as a residence for lay religious women who lived in community without taking vows or retiring from the world. These were not meant to be convents. The houses, small, informal, and often built within poor communities, emerged across Europe after the twelfth century. In most cases, beguines who lived here agreed to obey certain regulations during their stay and contributed to a collective fund. Eventually the complexes grew to be self-contained communities built around a central chapel. Several of these beguinages are now listed by UNESCO as World Heritage sites. 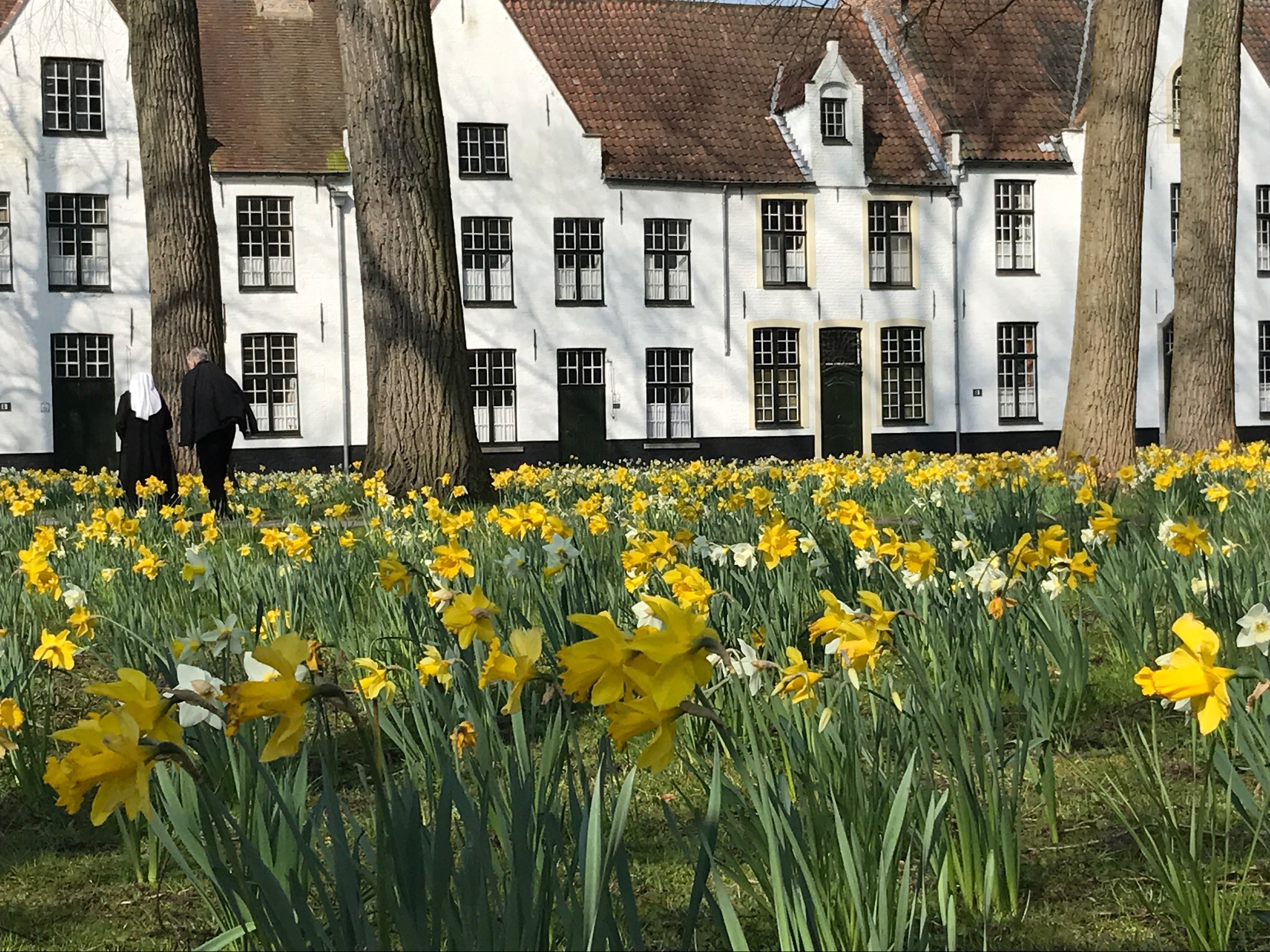 The Bruges’ Béguinage consists of a serene courtyard filled with an expanse of yellow daffodils, and rimmed by houses and a small chape. Walls and canals filled with ducks and swans encircle and separated the quiet complex from the town proper. Its gates were closed at night. Many women who lost husbands during the crusades needed a purpose and the 22 Béguinages about the Netherlands and Belgium filled this purpose. Dedicated to helping others, these sects survived into the 20th century, the last surviving Béguine dying in 2003. The modern Béguinage remains the domain of single women, sort of an ultimate retirement home for unmarried singles, except for the constant flow of tourist through the front yard. One of those tourist, painting the lovely daffodils and serenity was Winston Churchill.

Another stop right outside the gates of the Béguinage is the De Halve Maan Brewery, in this most serious of Belgium businesses since 1856. Their tour is interesting, and involves a lot of steep and narrow steps. But the payoff at the end is a wonderful cool glass of  Straffe Henrik (Strong Henry) Ale. The Belgians take their beer very seriously, with a specific glass for each variety of beer. When De Halve Maan was considering a move out of the city, the populace took positive action. To solve the ever increasing challenge of transportation of the ales for bottling, the brewery built a 3.2 km pipeline. And citizens were invited to pay the 3 million Euro to build it. Belgianswere happy to fork over the 250 Euros each and in return received free beer for life. The tourists take care of the rest.
Some fun excursions around Bruges include:

The bells and carillons toll and serenade not just on the hour and half hour, but throughout the day. Walking Bruges’ medieval streets, differentiating between what is old and what is modern but just looks medieval (look at the doors as size matters, original doors of the medieval era are smaller), it is amazingly easy to fall in love with this city. Its historic belfry not only commands the sky above the square, but the melodies that reach your ears and heart.

The Belfry of Bruges by Henry Wadsworth Longfellow 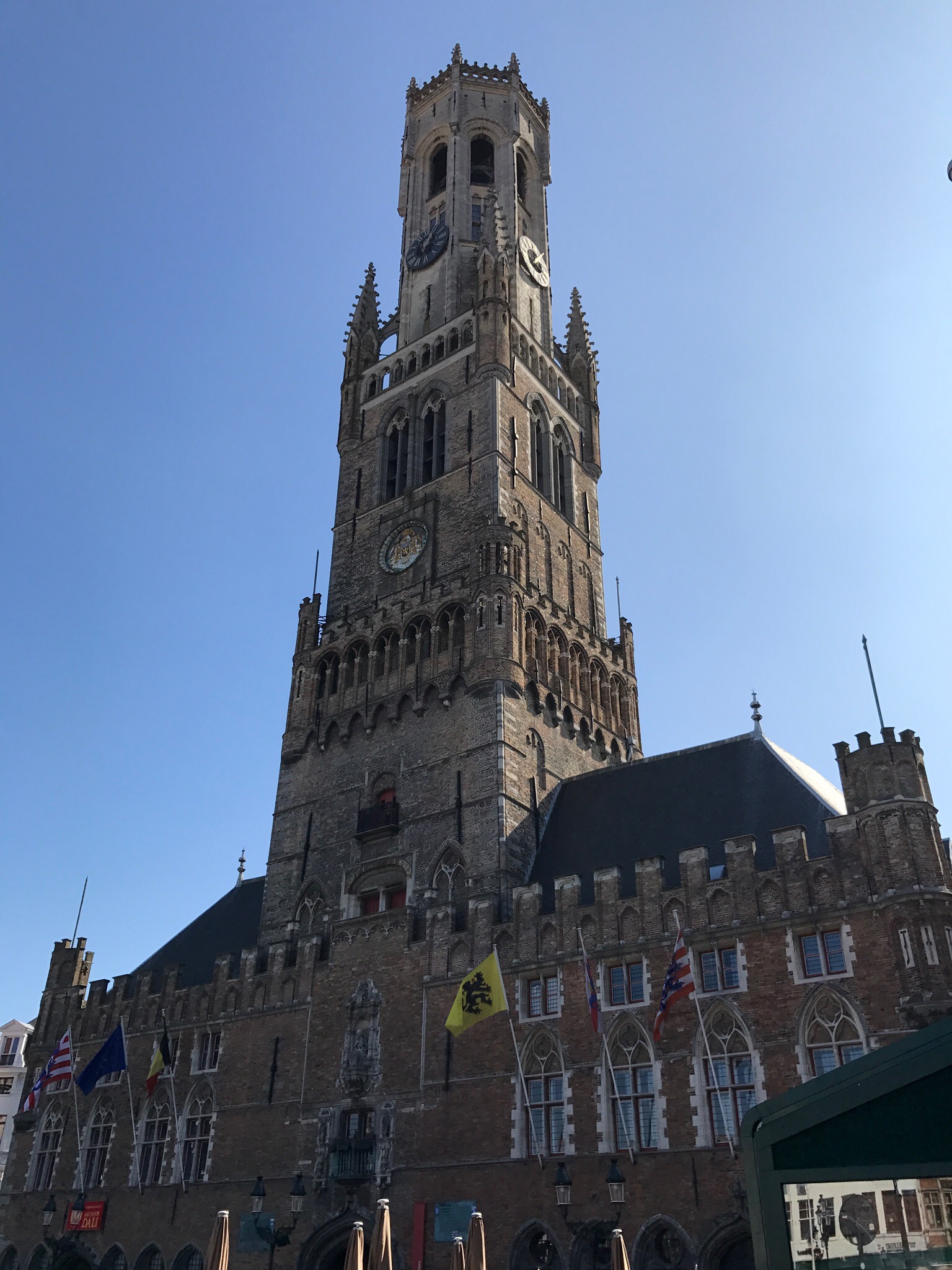 In the market-place of Bruges stands the belfry old and brown;

As the summer morn was breaking, on that lofty tower I stood,

And the world threw off the darkness, like the weeds of widowhood.

Thick with towns and hamlets studded, and with streams and vapors gray,

Like a shield embossed with silver, round and vast the landscape lay.

At my feet the city slumbered. From its chimneys, here and there,

Not a sound rose from the city at that early morning hour,

But I  heard a heart of iron beating in the ancient tower.

From their nests beneath the rafters sang the swallows wild and high;

And the world, beneath me sleeping, seemed more distant than the sky.

Then most musical and solemn, bringing back the olden times,

With their strange, unearthly changes rang the melancholy chimes,

Like the psalms from some old cloister, when the nuns sing in the choir;

And the great bell tolled among them, like the chanting of a friar.

Visions of the days departed, shadowy phantoms filled my brain;

They who live in history only seemed to walk the earth again;

All the Foresters of Flanders mighty Baldwin Bras de Fer,

I beheld the pageants splendid that adorned those days of old;

Stately dames, like queens attended, knights who bore the Fleece of Gold

Ministers from twenty nations; more than royal pomp and ease.

I beheld proud Maximillion, kneeling humbly on the ground;

I beheld the gentle Mary, hunting with her hawk and hound;

And her lighted bridal-chamber, where a duke slept with the queen,

And the armed guard around them, and the sword unsheathed between.

I beheld the Flemish weavers, with Namur and Juliers bold,

Marching homeword from the bloody battle of the Spurs of Gold;

And again the whiskered Spaniard all the land with terror smote;

And again and the wild alarum sounded from the tocsin’s throat;

Till the bell of Ghent responded o’er lagoon and dike of sand, 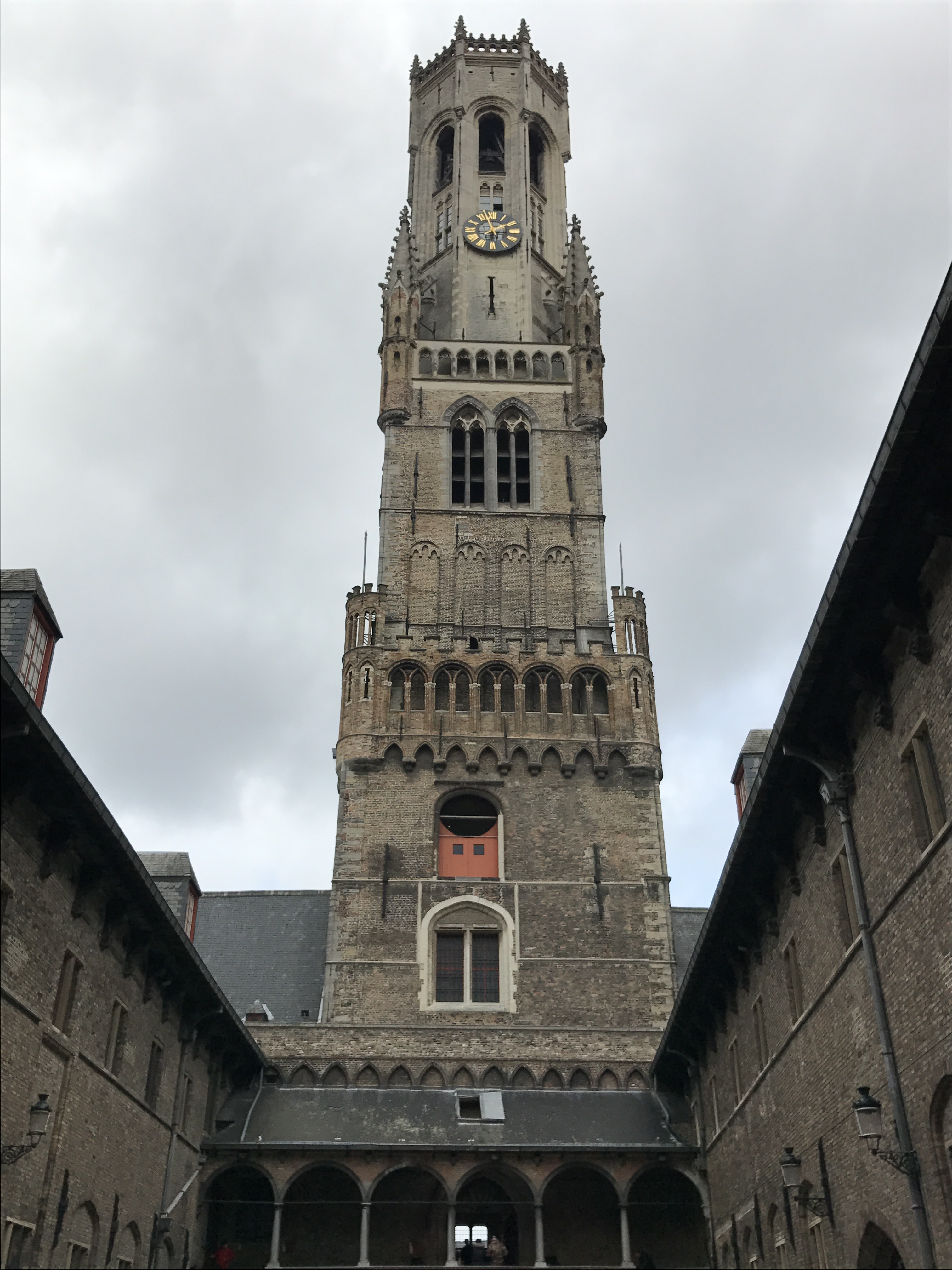 Then the sound of drums aroused me. The awakened city’s roar

Chased the phantoms I had summoned back into their graves once more.

Hours had passed away like minutes; and, before I was aware,

Lo! the shadow of the belfry crossed the sun-illumined square.