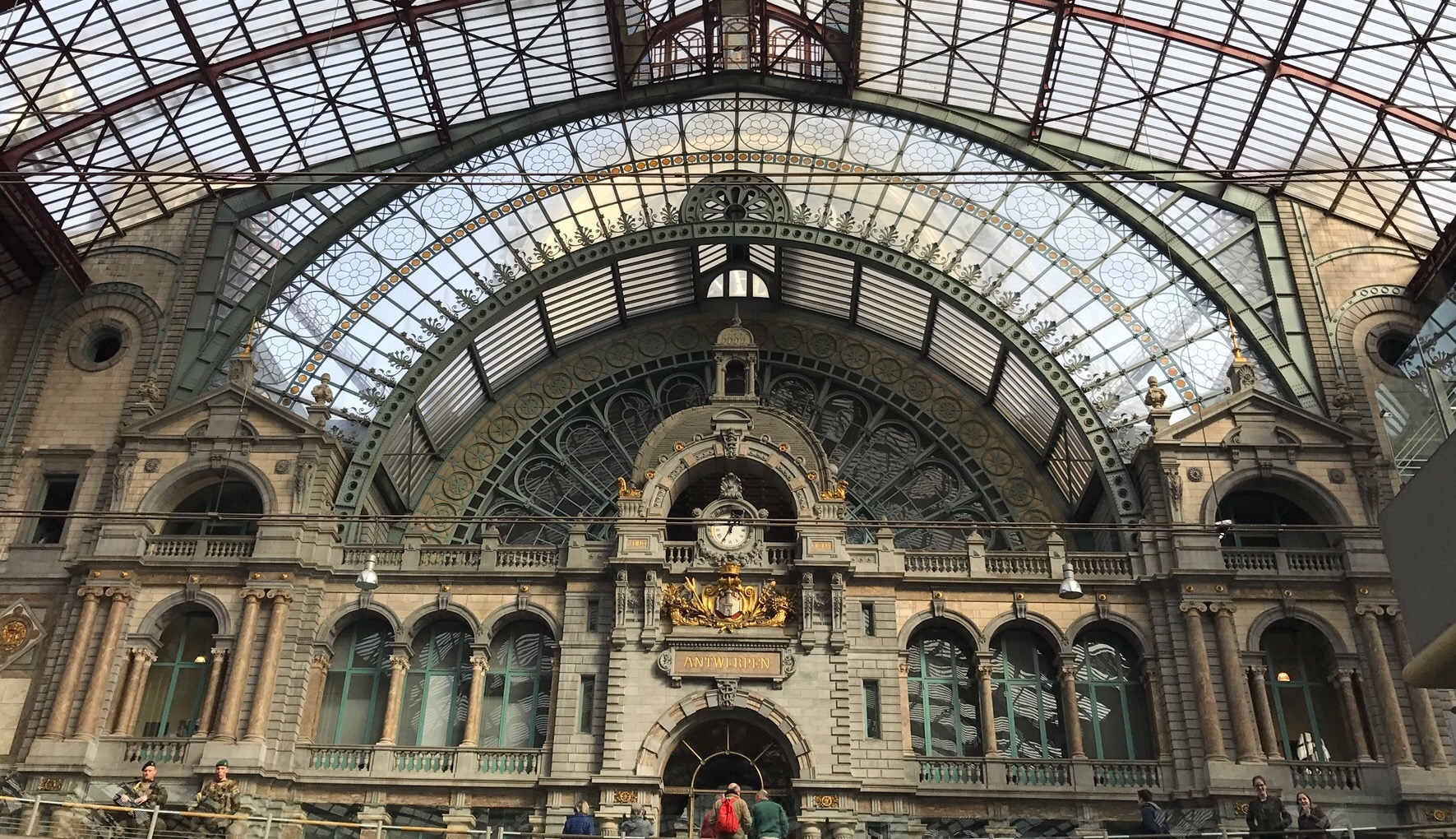 What I will remember about Antwerp was arriving by train into their Centraal Rail Station. Looking up, one recognizes perfection and beauty when one sees it. And the beauty of this station is right in front of you upon exiting the train.

It was not so long ago that the station’s demolition was debated. Antwerpen Centraal was built between 1895 and 1905 and suffered the destructive impacts of German V-2 bombs in 1944‘s massive bombing campaign. In fact, the entire city suffered the loss of over 90,000 buildings. Due to the impact of these bombs, the station suffered serious stress fractures to the roof.

Allies liberated Antwerp in September 1944, but if the Germans couldn’t hold it, Hitler determined no one would and ordered massive aerial bombardments to begin in mid-October. During the next six months, over 850 V-1 and V-2 missiles dropped on Antwerp and many more fell on the areas surrounding the city. While the V-1 could be intercepted, and was, by anti-aircraft fire and fast aircraft, the V-2 was nearly invisible. It took just 30 seconds for the V-2 to reach the speed of sound. Most were being fired from the occupied areas of eastern Netherlands and western Germany. It took very little time to reach altitude then silently drop on its victims.

Most people know about the bombing of London during the war but few realize that more than half of the 3,000 V-2s launched by Germany were directed at Antwerp. Their main targets were the port, airfield, rail lines and main roads into and out of the city. And because rockets were not that accurate, countless civilians and properties were also destroyed. 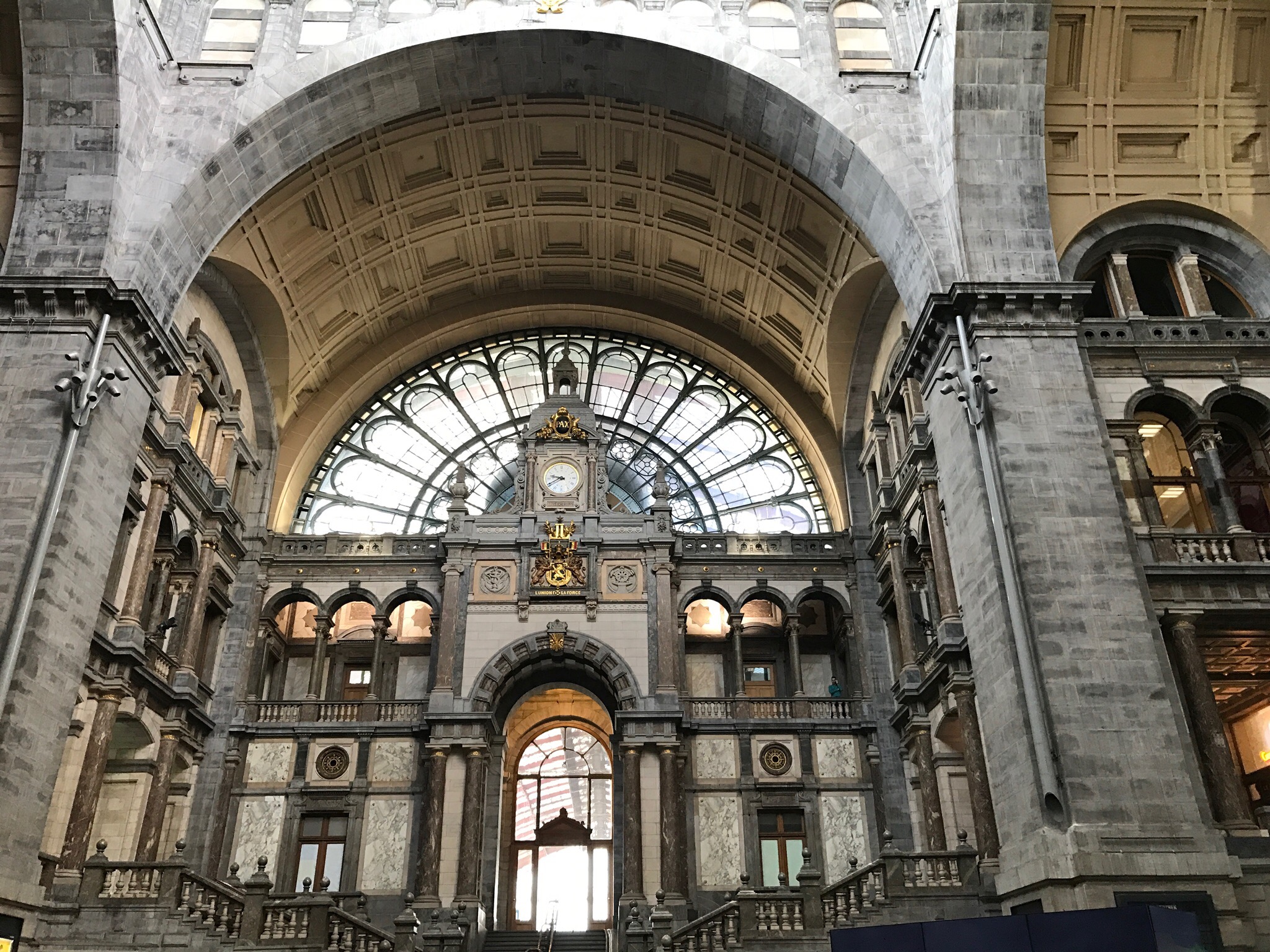 So the debate raged as to what to do with this magnificent rail station. Fortunately, the Belgium National Railway opted to begin extensive restoration in 1986.

The 130,000 square foot iron and glass entrance hall (616 feet long and 144 feet high) is stunning as I ride up two floors of escalators to its upper level. The height of the station was necessary for the steam locomotives; now it is for the visitors’ eyes.

The stress problems due to the impact of bombs during the war was solved by the use of polycarbonate sheets instead of glass (lighter in weight and more flexible), something I cannot distinguish as I look at the surrounding ceiling, open expanse of the entrance hall, ornate carvings and winding staircases, exquisite clocks and designs.

The outside is also beautiful. I notice the roof and facade, after repairs, were painted what I call “Golden Gate Bridge orange vermilion.”

Antwerpen Centraal is rated by many to be the most beautiful rail station in Belgium and one of the top examples of stations in the world. Walking around the interior, admiring the iron and glass halls, studying the facade, it is easy to understand why Newsweek Magazine judged it to be the world’s fourth greatest station. There is much to enjoy about Antwerp, but just stopping by for the station is a trip well spent.

What else to do once you leave the train station?

Antwerp is a market town and the Vogelenmarkt, Birds’ Market, is a good way to spend a couple hours. You will find every sort of trinket, clothing item, flower or bulb, cheese or sausage, auto or bicycle part imaginable. And, you will find birds and other furry critters. I don’t know birds well, but I do know miserable when I see it. There were a whole lot of bird types in the market and most were crowded, nervous possibly psychotic, sometimes hen pecked. In America, PETA would go nuts! The caging and crowding bordered on cruel. The bunnies and gerbils fared better.

Machine-gun-toting, camouflage-wearing soldiers patrolled about the city. It was nice to see the four-year-old boy walk up and shake their hands. It was disconcerting to recognize why they were there.

An enjoyable hour was spent touring the huge, well decorated and lavish Peter Paul Rubens’ home just a few feet from the Bird Market. Rubens (1577-1640) did well for himself in his life time. He is considered the most notable and popular of the Flemish Baroque artists. Not only are there several of Rubens’ paintings throughout the house, but Rubens also collected his favorite artists. Rubens’ wealth shows, which makes him unusual as an artist as the two previous Dutch masters we have visited were not so fortunate. Van Gogh committed suicide by age 37 (1853-1890) and did not become popular until some time following his death, and Rembrandt (1606-1669) died in poverty.

Grotte Markt, Antwerp’s Great Market Square, is the heart of the old city. Getting there means walking through a modern shopping area, but it is a square not to be missed. Surrounded by City Hall and numerous Dutch Renaissance guildhalls, the square is lively with people enjoying the sun, cafes, and carillons of the nearby Cathedral of Our Lady of Antwerp. It is Dutch architecture at its best with its distinctive roof line, brick work, chimneys, gables, golden statues and adornments. 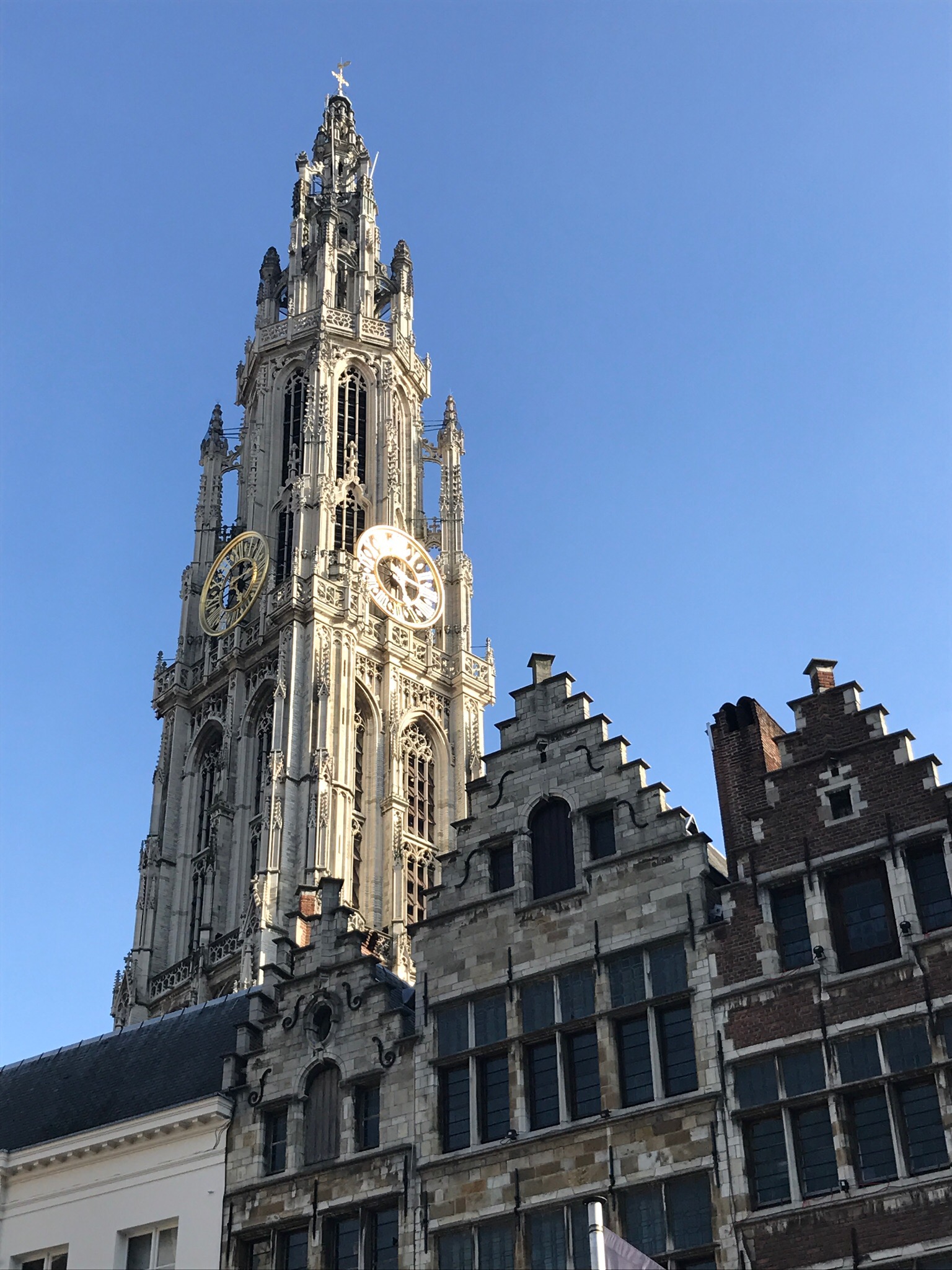 The impressive Cathedral of Our Lady was mostly completed before Columbus discovered America. As with most major cathedrals, it was begun many centuries ago and rebuilt and enlarged several times. The existing church would become the largest Gothic church in the Netherlands and is over 260′ long and 140′ wide. It contains three major works by Rubens as well as by other major artists. Its belfry is included in the list of UNESCO’s belfries of Belgium and France, and rightfully so. Original plans were drawn for twin towers. However, only a single spire was completed in 1521. It soars over 400′ above the city while the south tower only reaches about a third of that height.

Mussels seem to be a mainstay of the Belgium diet. They are not possible to resist. I am served a large pot of copious numbers of these delectable bivalve mollusks. Sitting in a Grotte Markt cafe, sipping chilled wine while admiring the homes and guildhalls of the wealthy and powerful, I can only imagine what the good life must have been for the lucky inhabitants of 17th century Antwerp.