Brussels has changed since I last visited. In fact, Brussels was the first “out of country” event I ever experienced. Way back in 1972 this novice traveler landed in Brussels with too much baggage, too high of heels, and too many whistle-provoking clothes. Google Maps wasn’t even close to being realized.

Today, I am back. One little bag, sensible shoes, too old for whistles and using my Google Map to navigate the short distance to my wonderful Hotel Agora Brussels Grand Palace.

There are several outstanding features of Brussels. But first, my mapping takes me to the symbol of the city, the tiny Manneken-Pis. Cruelly voted as the most disappointing statue in the world, the tiny guy seems to take it all in stride and continues to stream his opinion out on the world. Gracing this corner since 1618 and surviving several kidnappings, the boy owns over 900 costumes, but remains naked most of the time. During a special beer celebration, do Belgians really drink the beer coming forth from the little tyke? 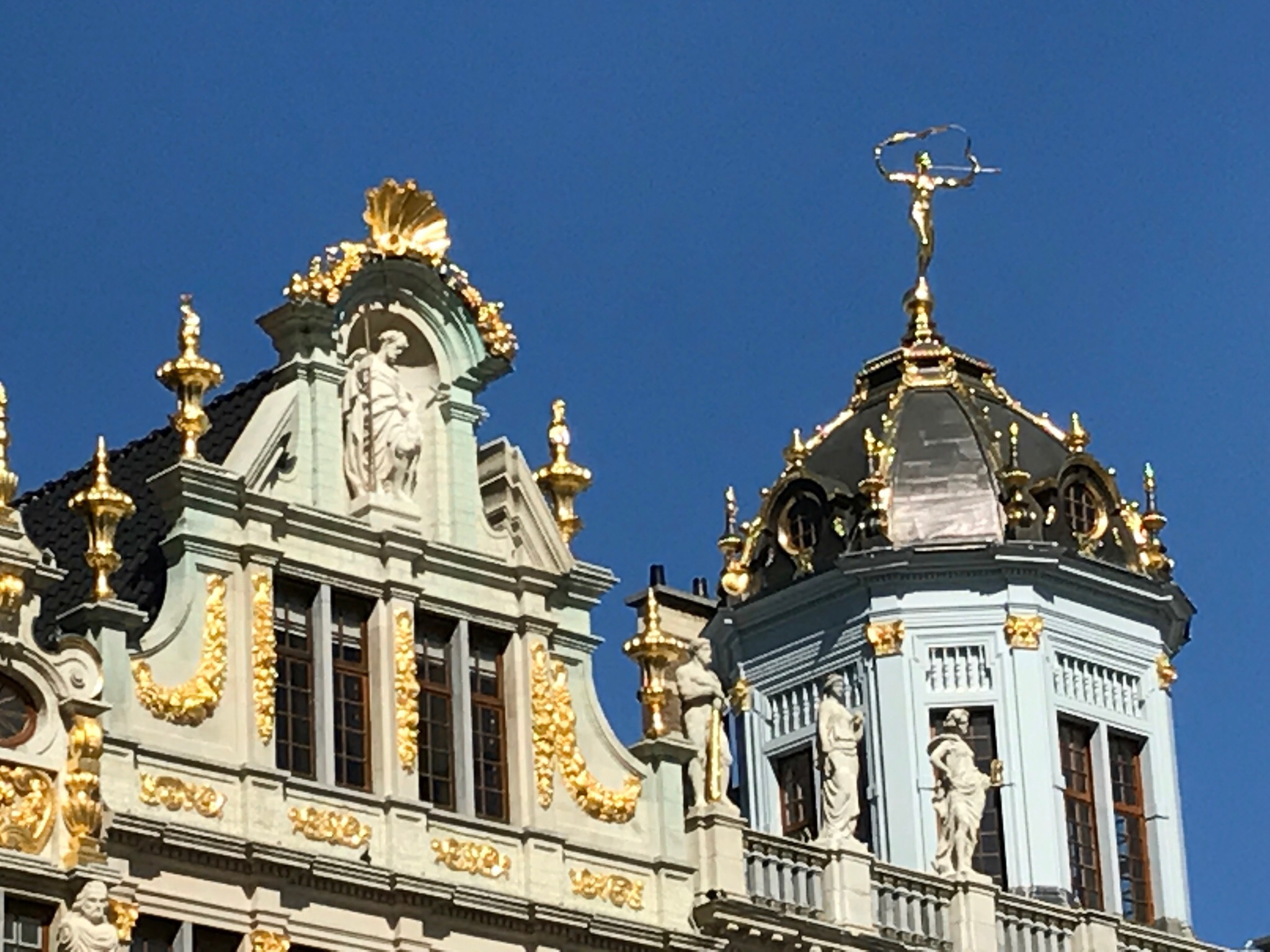 Certainly one of the most beautiful squares in the world, and Victor Hugo’s favorite, the Grand Palace reigns supreme. The Grand Palace, or Grote Markt, began in the 10th century as just a ‘simple’ market square but for the very, very rich. It has been destroyed and rebuilt several times and the latest rendition is the pride of Brussels. Surrounded by luxurious guild houses built 1696-1699, the Hotel de Ville (City Hall) has to fight for attention. The City Hall was built on the south side of the square in stages between 1401 and 1455, and made the Grand Place the seat of municipal power. Its tower soars 315 ft. Into the sky and allows an amazing view of the city. Personally, I think the Grand Palace is best savored over a Trappist beer in the plaza, gazing up at the opulent guildhalls.

Speaking of chocolate, there is a fine Choco-Story museum right off the Grand Palace. An expert chocolatier will demo how it’s made and hand out samples. The small museum is interesting and allows participation in some serious chocolate tasting. 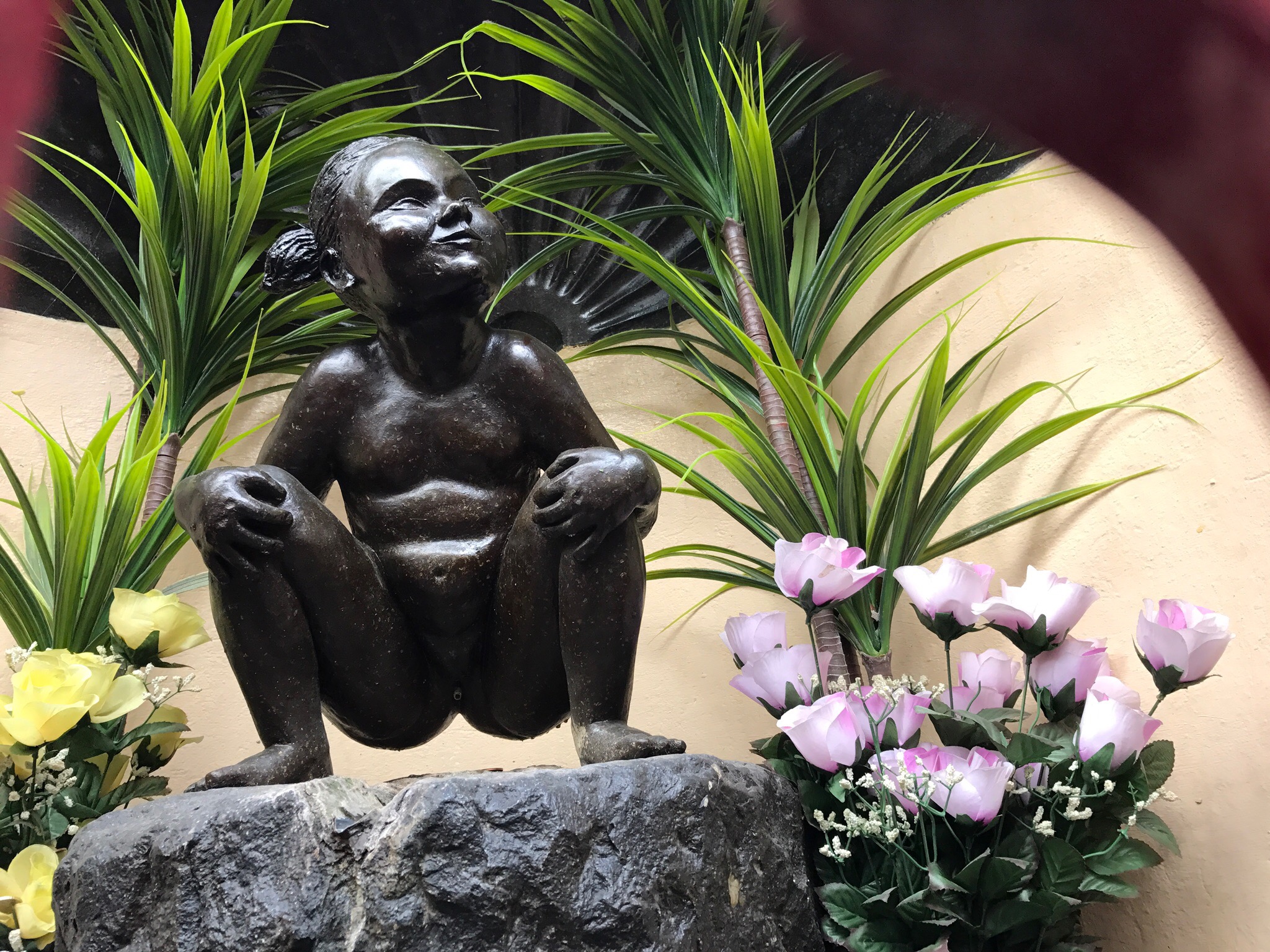 There is a new girl in town. Jeanneke-Pis, bringing female quality to Brussels, was erected in 1987. The small 2′ bronze statue depicts a little girl with short pigtails and nothing more, squatting and urinating in her little corner. Found in a short alley across town from her “brother,” she is worth the walk. Right across the alley is a bar that brags it has the biggest selection of beers in the country.

I tend to check out the churches wherever I go and Brussels has a gem in St. Michael and St. Gudula Cathedral. Groundbreaking was in the 9th century, but building continued through the 13th century when towers were added, with the church only completed in 1519, just before the reign of Holy Roman Emperor Charles V. It was just given Cathedral status in 1962.

The Cathedral is immense with a length of 358’ and width of 187′. The twin towers soar 210′ into the sky. Sitting on a slight hill, or “mountain” as the locals call it, the Cathedral dominates the skyline. The towers were designed by the Flemish architect Jan Van Ruysbroeck, who had previously designed the tower for City Hall. (Thus disproving the rumor that he had jumped from his tower because it was not perfect.)

The Cathedral’s south tower contains a 49-bell carillion which can be heard about the city. Inside, the stained glass and intricately carved baroque pulpit are highlights.

A special experience was the Steve McCurry Exhibition at Bruxella 1238 (the Stock Exchange building). McCurry is a seasoned photo journalist who began traveling at age 19 and fell in love with photography. He combined his two loves and became one of America’s best known photo journalists. McCurry is best known for his 1985 photo of the “Afghan Girl.” The penetrating eyes of this young Afghan woman living in a refugee camp in Pakistan was seen on the cover of National Geographic and became the symbol for refugees the world over.

The exhibition displays dozens of McCurry’s photos along with an audio guide in which McCurry explains the story behind many of them. Videos also document McCurry’s work and life as a photographer around the world and in the heart of several wars. There is also the documentary of his 2002 return to Afghanistan in search for the Afghan Girl. The exhibit is traveling. If it comes to your part of the world, be sure to attend. 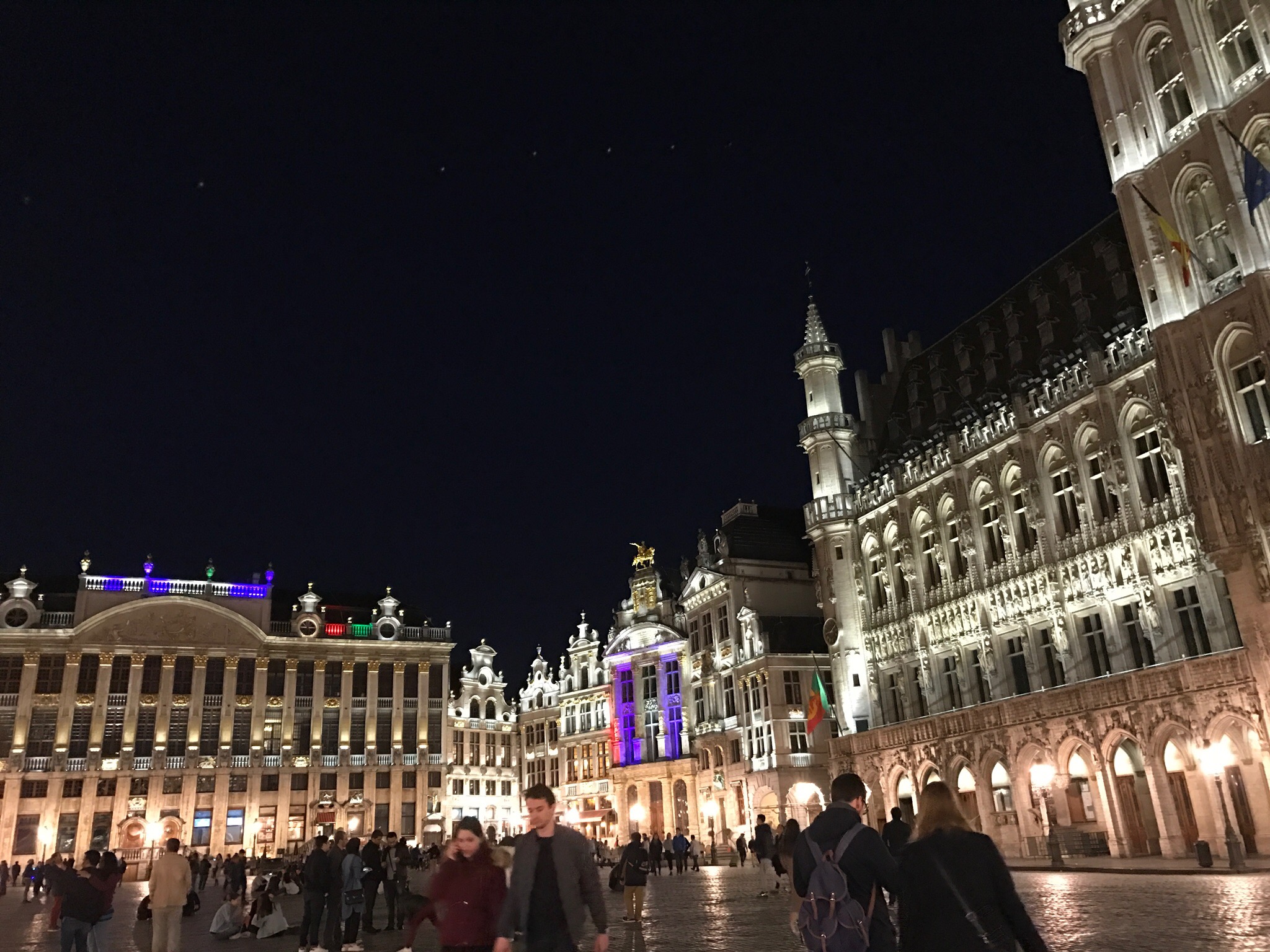 Brussels is an easily walkable city with many vibrant squares and local neighborhoods. Cafes, bars, and chocolate shops abound. However, the Grand Palace is always the place to be, especially in the evening. The square is gorgeous in any light. During the day, the sun reflects off the gold peaks and ornamentation. But in the evenings, colored lights flow among the columns and roof lines. The square is filled with street musicians and children playing. It is the perfect place to dine on the five foods of Brussels: waffles, chocolate, fries, mussels and beer.