Ghent – The Trois of the Ménage 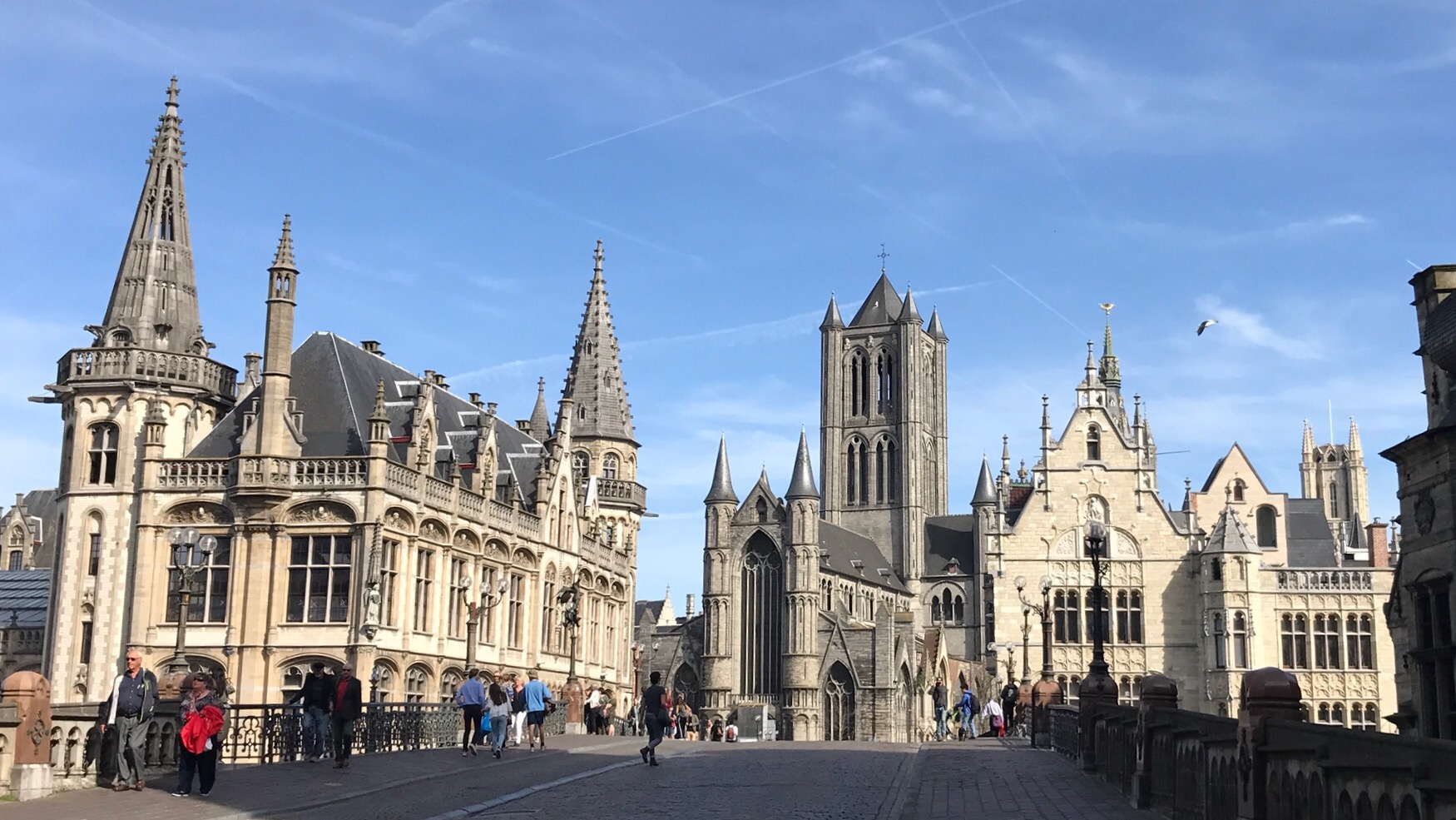 Ghent has the ‘misfortune’ of being sandwich between the phenomenal Grand Palace Square in Brussels and the incredibly beautiful medieval city of Bruges. Antwerp has its stunning rail station, Bruges its belfry, and Brussels the gorgeous Hotel de Ville. In Bruges, in Brussels, the architecture, museums, cafes and streets present a delightful invitation to wander and fall in love with these lovely cities.

Upon arrival into Ghent (Gent for the French and Germans), my first impression was the city had its work cut out for it. The rail station was appealing, the ubiquitous bicycles stood in a row outside, but most architecture seemed modern and plain. I had read many favorable comments about this city. What was to be my ultimate “ah ha” moment for Ghent?

Ghent’s claim to fame is the awesome vista from the St. Michael’s Bridge. While standing on this bridge, spanning the muddy waters of the Leie River, facing the busy main square, the Korenmarkt, the panorama is filled with the magnificent belfry and towers that draw visitors to Ghent. To my very right is the large, in need of a power wash, St. Michael’s. Ahead, across the bridge, is the busy Korenmarkt.

Commanding my attention is the magnificent tower of St. Nicholas’ Church. Directly behind is Lakenhalle or Cloth Hall with its 300’ Belfort (Belfry). And across the square, towering into the sky, are the towers of Sint-Baafskathedraal (St. Bavo). The brilliant blue sky is literally a plethora of towers and steeples. Obviously, this is a part of Ghent that can hold its own when it comes to beauty and historical interest.

Stepping into the Korenmarkt, I am surrounded by its activity. Street musicians, cafes, architecture and the wonderful Stadhuis must not distract from the zooming bicycles and trams. It is hard to take this all in. Best to do so in a safe corner or atop the Belfry. 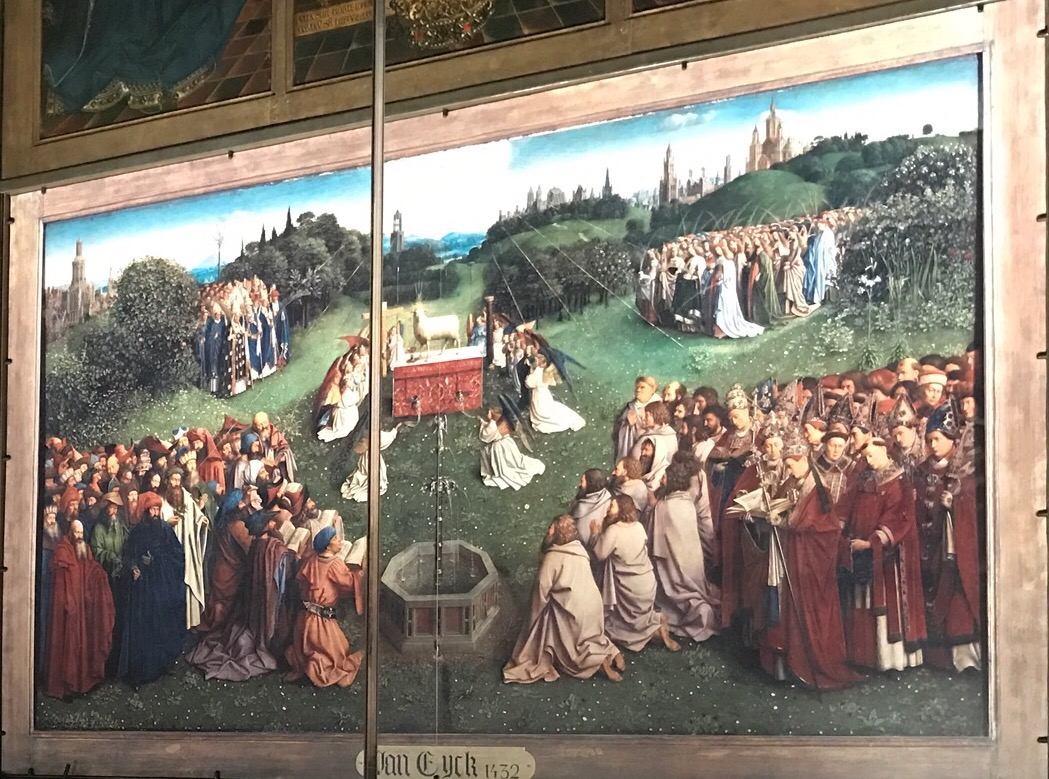 Certainly the pièce de résistance of Ghent is its famous altarpiece. The visit to St. Bavo is free but there is a small charge for the room holding the master work. The audio guide explains the piece in detail. Jan van Eyck’s “Adoration of the Mystic Lamb” is a 15th century masterpiece of European art and considered to be one of the world’s art treasures. Designed by Hubert van Eyck, the complex polyptych was painted by brother Jan around 1430. The room is small but uncrowded so we could walk around and admire every panel while the audio explained every detail. The altar piece is known as a masterpiece of Dutch Renaissance but perhaps even more famous since the movie, “Monuments Men” documented the Nazi theft, discovery, and return of this priceless art work.

Another must see and must climb is Gravensteen, or Count’s Castle, a 12th century castle built in 1180 by the Philip of Alsace and modeled after the great crusader castles that Philip encountered while on the second crusade. The impressive walls and battlements of Gravensteen tower over the city. The castle served as the seat of Flander’s counts until they abandoned the fortress in the 14th century. The castle was then used as a courthouse and a prison. Lately, in 2015, it was used for the filming of “Emperor” with Adrian Brody.

The Flemish Béguinages are unique historical sites, somewhat like secular convents, which also date back to the time of the crusades. As men left for the crusades, there was an oversupply of adult unmarried women left behind. This was not a good thing as the norms of the time required that women either be married, live with their families, or enter a convent. The Béguinage was a place designed for these single or widowed women who could then live outside their families, own property, and live their own lives. Many of the women worked outside the walls of the complex, usually in hospitals or schools.

The cafe, music and good life surrounds me on all sides as I walk the Korenmarkt (corn market) and the equally vibrant streets along the water and into two additional active squares, the Vrijdagmarkt (Friday market) and Groentenmarkt (vegetable market). Ghent has a strong tradition of socialist-democratic movements and evidence of the historic Progress or Vooruit movement can be seen in some of the art nouveau and art deco buildings around squares, particularly the Ons Huis (still used as a trade union headquarters) in Vrijdagsmarkt.

Streets are busy with trams, horses and buggies, bicyclists, and pedestrians enjoying the sunny spring day. As I stand on St. Michael’s Bridge, below me, on both sides of the river along the streets of Graslei and Korenlei, are thousands of young people enjoying the commradarie of a sunny afternoon. Gable houses line the streets, guildhalls shine, boats ply tourists up and down the river, and towers and belfries mark the skyline. 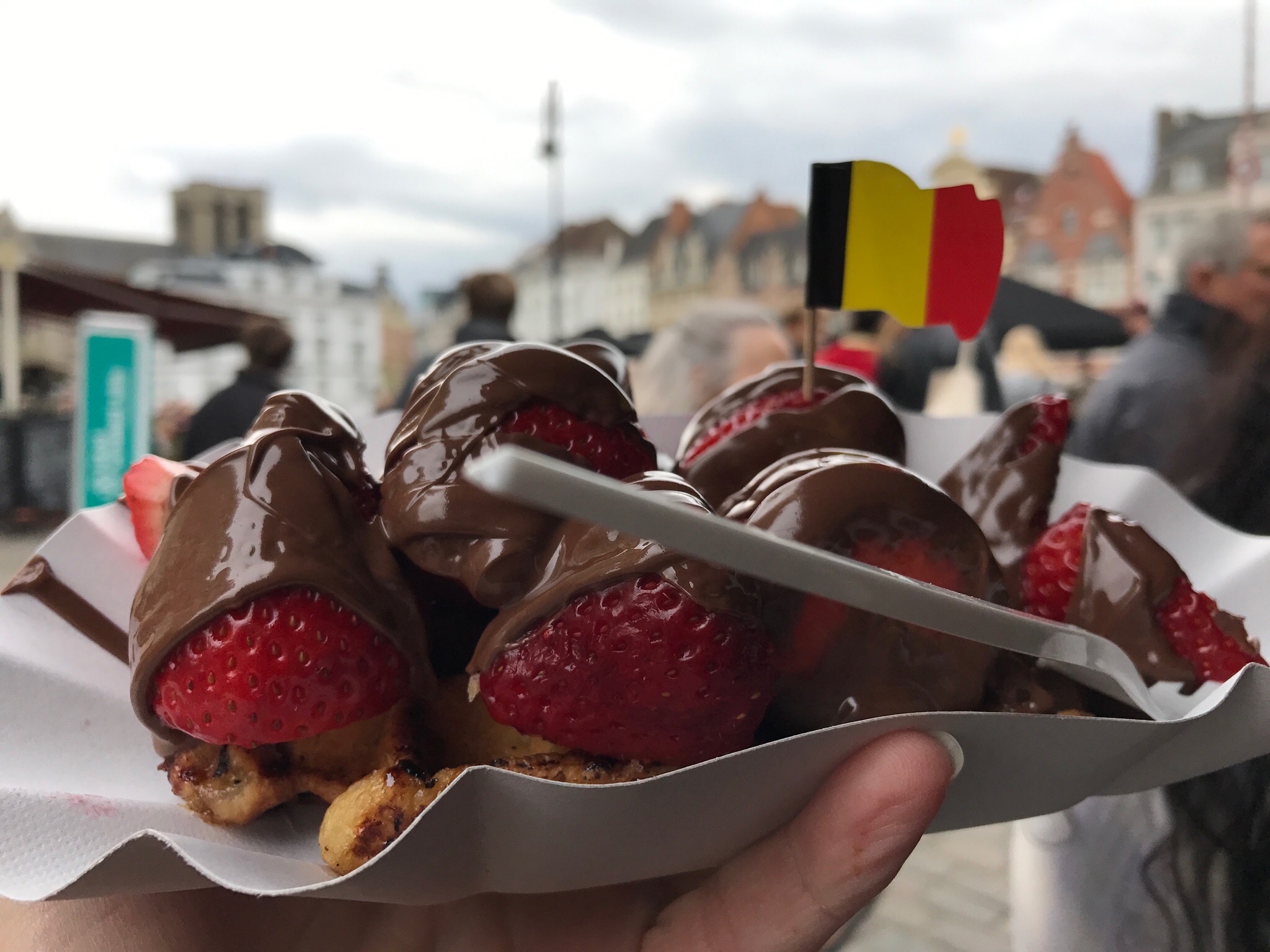 In fact, Ghent is a university town, perhaps giving a vibrancy to the city beyond that of just tourism. The Korenlei and Graslei quays are lined with cafes and loungers. Most everywhere one walks in the historic section of Ghent, the towers dominate, the chocolate smells tantalize, the Trappist beers abound. From the colorful and artistic Graffiti Street to the masses of young people along the river, the street life and liveliness of Ghent is remarkable.

After a couple days walking its streets, eating its waffles and chocolate, and drinking its beer, I have come to the conclusion that Ghent does a good job of holding its own as a ‘must visit’ city of Belgium.