I drive the Western Front. Names of towns and their historic significance batter me: Passchendaele, Ieper, Lille, Vimy, Peronne. VERDUN!

“They shall not pass.”

This is the infamous Argonne; it breaths the words of Erich Maria Remarque’s “All Quiet on the Western Front.” It is quiet, but the serenity is deceiving. This soil has probably seen more mayhem and death than anywhere in the world. The men who fought here called it “The Meat-Grinder.”

When I think of World War One, The Great War, “the war to end all wars,” I think of mud and trenches, of charging the enemy on horse with saber. But it was shrapnel and shell holes, carnage and death. As I will read and witness over and over during this week, WWI began on the level of the Crusades but ended in a world of modern warfare with massive tanks, aerial bombardments, newly designed weapons for mass killing, and gas. I begin by exploring the history, then the actual battlefields, of Verdun.

To understand Verdun, my first stop must be the Verdun Memorial and Museum of the Great War. This is without doubt one of the best museums on WW One. The displays, artifacts, visuals, memorabilia and photos are informative and well explained. There is a large screen depiction of the battle. Ten minutes with this historic battlefield footage, shockingly gruesome, puts much in perspective, preparing me for the sites to come.

Verdun, France, is prettily situated in a valley surrounded by hills, the Meuse River meanders peacefully through town center and forms several canals and ditches. The city lies at the southeastern section of the Western Front, which extended some 466 miles across northern France, Belgium and western Germany. It consisted of a very long line of muddy trenches, blasted forests, concrete fortifications, and killing fields. The Front was relatively static for almost four years with multitudes of lives destroyed but little territory lost or gained. But on Verdun Salient, on the morning of 21 February 1916, the stalemate turned to ferocious fury. 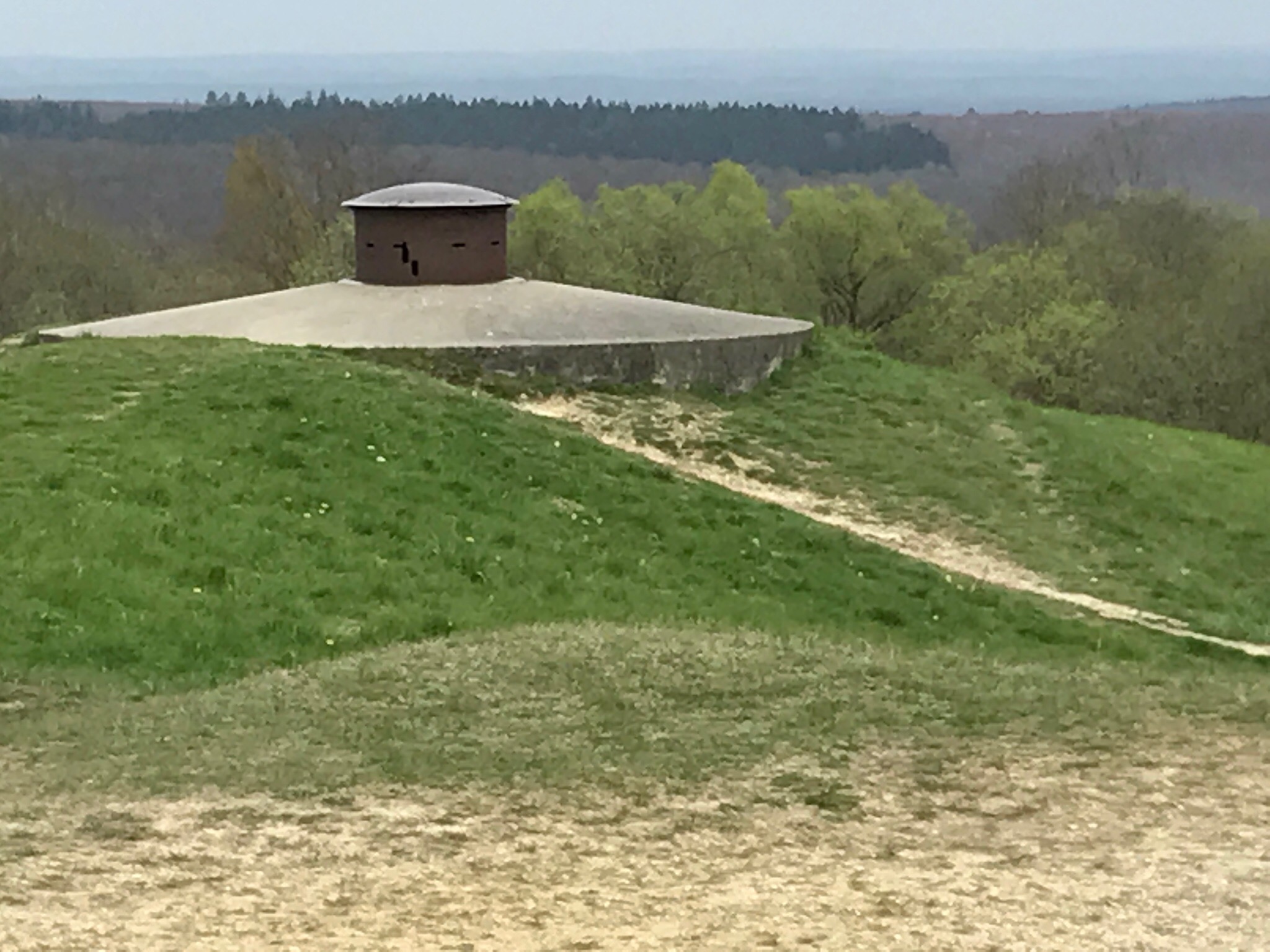 Germans opened the offensive with a withering artillery bombardment of Fort Douaumont on the right bank of the Meuse in the rolling hills about 8 miles north of the city. Warnings of the upcoming onslaught were ignored by the French Command and troop levels were low. Consequently, Verdun was utterly unprepared for the initial bombardment. German infantry attacks followed that afternoon. In this initial bombardment, Germans fired an estimated 2 million shells in 10 hours!

Fighting continued for 303 days until 18 December 1916, making it the largest and longest battle between French and German armies in WW I on the Western Front. Human costs are unimaginable with estimates of casualties from 714,231 to 976,000 during the 11 month battle with over 377,231 French and 337,000 German casualties. That is an average of 70,000 casualties a month! Some researchers believe over 1,250,000 human lives were lost at Verdun during the war. Of the casualties at Verdun, 70 percent were caused by artillery.

Following the opening day shell launch by the Germans, more than in any engagement in history to that point, the two sides eventually fired between 40 and 60 million shells at each other. Verdun became a war of attrition with Germany hoping to wear France out. 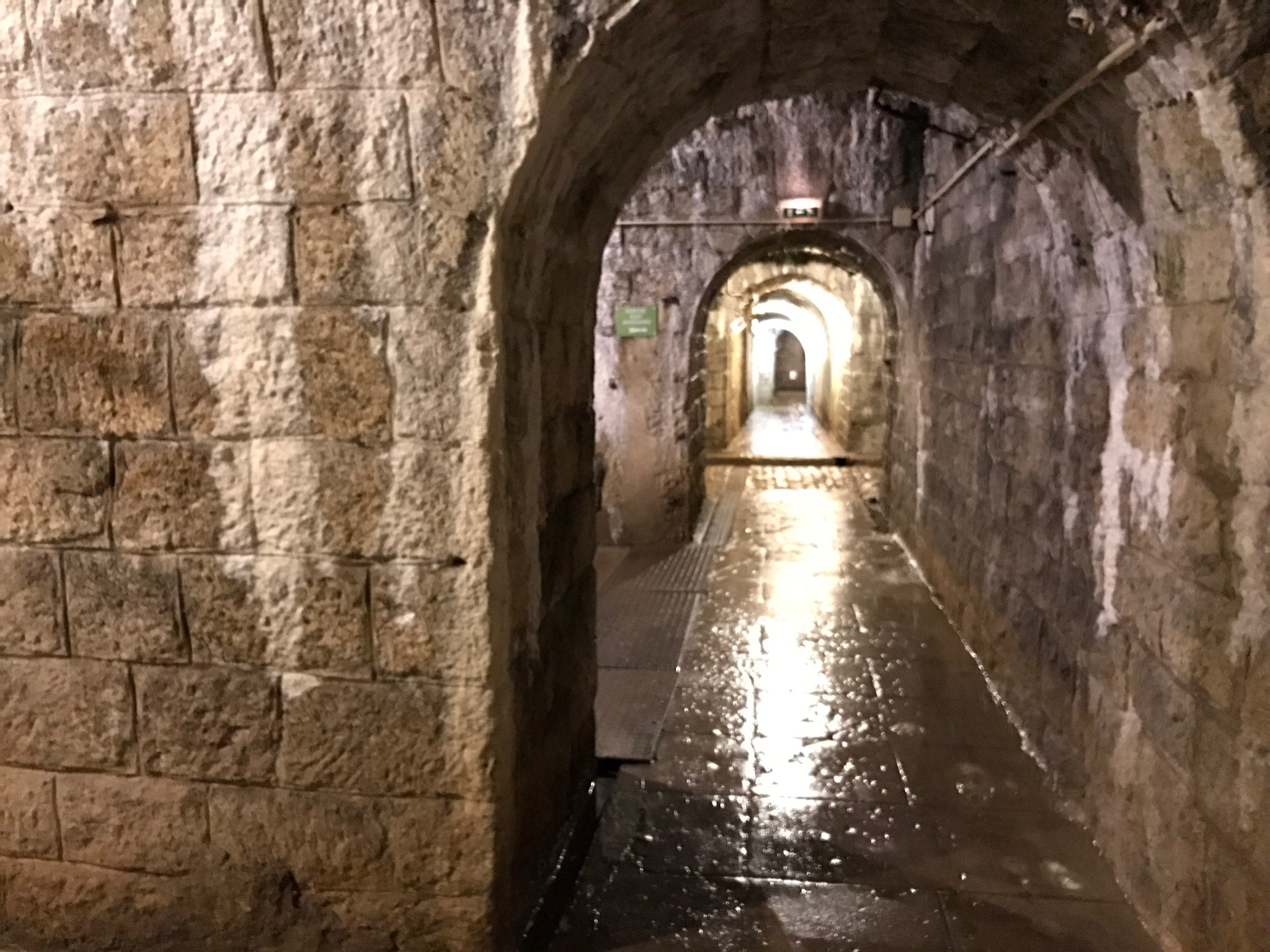 There has been a fort here since 1885. Verdun was the strongest line in pre-war France, ringed by a string of powerful forts, including Fort Douaumont and nearby Fort Vaux. Douaumont was the largest and highest fort of this ring of 19 defensive forts protecting the area. Covering 7.6 acres, Douaumont is a maze of tunnels more than 1300′ long. The subterranean levels are protected by a steel reinforced concrete roof over 40′ thick. Two main tunnels running east-west, one above the other, has barracks rooms and corridors to outlying parts of the fort.

By 1916, the salient (fortification and line of military defense) at Verdun jutted into the German lines and lay vulnerable to attack from three sides. Standing atop the underground bunkers of Fort Douaumont, I can see the turrets and gun emplacements, the shell holes and trenches. 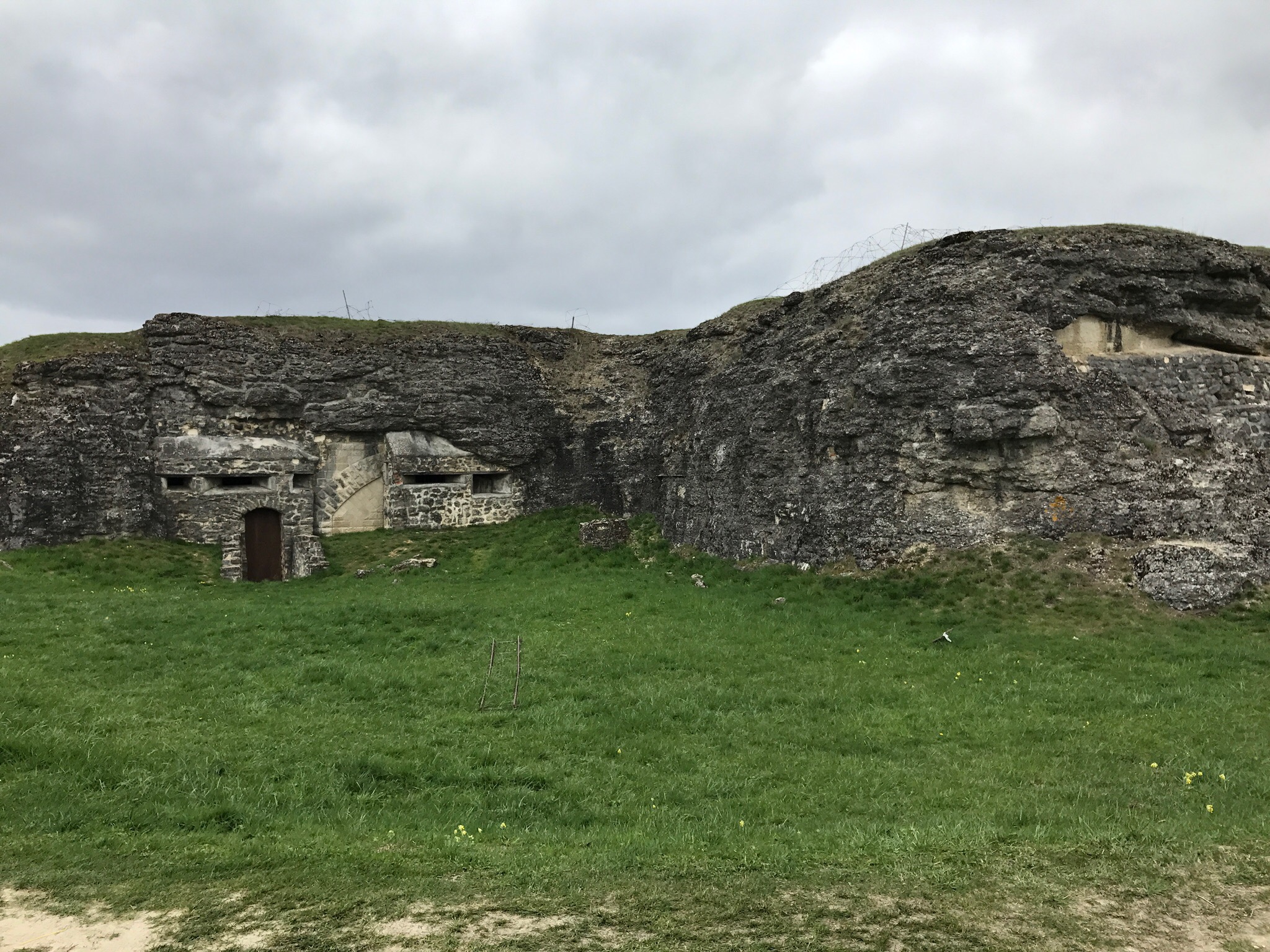 I walk the tunnels of Douaumont; it is wet and cold, my breath visible before me in the fridged air. I try to imagine life holed up here in the bowels of the hill for months. Persistent bombardments rained down, large-calibre guns did their damage to walls and ceilings, up top sharp shooters waited for opportunity. When the incessant German shelling began there were less than 60 men and no officers at the fort. They were sorely unarmed.

The Germans quickly reached the fort’s moat, finding the wall casemates unoccupied. Climbing inside an access door, fearing ambush, a lone Sergeant wandered around the empty tunnels until he found the artillery team, captured them and locked them up. Fort Douaumont was breached and fell 25 February. No shots were ever fired.

The French revised their strategy and out of 320 of their infantry regiments, sent 259 to serve in Verdun. On 7 June, Fort Vaux also fell to the Germans after a murderous hand-to-hand fight inside the fort itself.

The same could not be said for the recapture of the fort by the French on 24 October. Thousands of lives were sacrificed when infantry divisions charged the fort. Germans continued to fight but the Somme intervened. Germans could no longer afford to continue their offensive at Verdun when they were needed so desperately on the Somme. Germany withdrew to the Somme where the Allies second attack was meant to draw troops from Verdun. In August, the Germans began a retreat, abandoning the terrain they had won at a cost of thousands of French and German lives; the attack was called off. Germany’s intention to bleed France to death had failed. 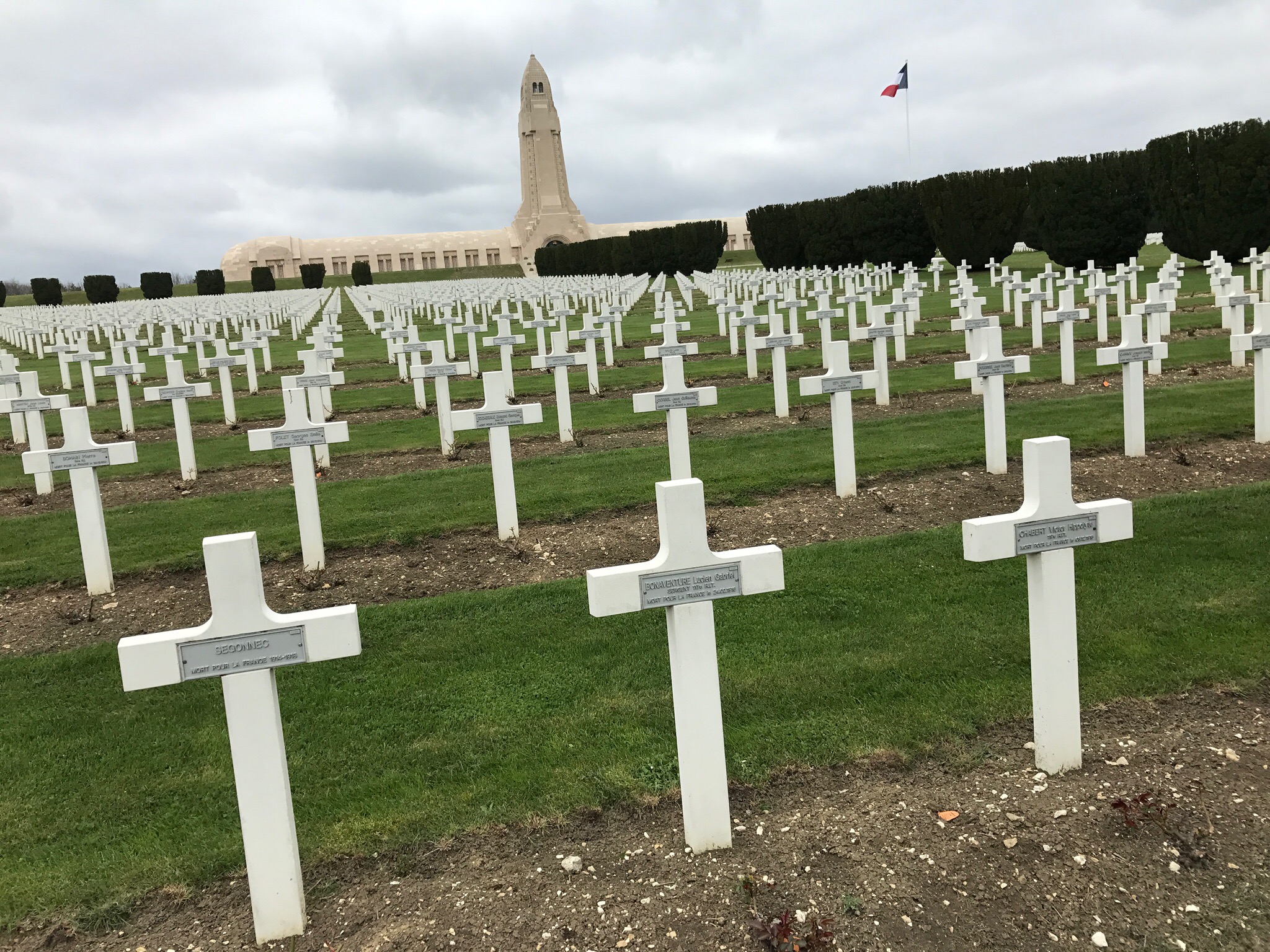 There are many French and German cemeteries throughout the battlefield. The largest is the French National Cemetery and Douaumont Ossuary near Fort Douaumont. Thirteen thousand crosses adorn the field in front of the towering Ossuary, which itself holds roughly 130,000 unidentified remains brought in from the battlefield. The Ossuary tower with its bronze “death-bell” is 151′ high; the cloister is 450‘ long. At its top is a rotating red and white “lantern of the dead” which shines on the battlefields at night. Every year additional remains are recovered and placed within the ossuary’s vaults, so well explained in the museum’s video.

There are memorials to the fallen at every corner of the path. I left an American flag at the Heroes’ Grave. I visited the memorial to Basque soldiers. An honored memorial is the “Bayonet Trench,” which marks the location where some dozen bayonets were found lined up in a row, projecting out of the ground. Perportedly below each rifle was the body of a French soldier, killed during a bombardment and buried where they lay in the trench. Somber, simple crosses rest in a massive stone edifice over the trenches

Dramatic reproductions, historic film, and monuments fail to represent how shocking gruesomeness of WWI. The carnage cannot be imagined. Monuments pepper the countryside. But is is the row on row of gravestones that impact the soul: just too many markers with “A Soldier of the Great War,” “Here rests in Honored Glory An American Soldier Known But to God.”

Soldiers, young men, were told the war was essential, it had to be won to protect and defend the world as they knew it. I see ages 19-23. Thousands of such stones representing the youth is a nation. It is heartbreaking.

Just outside Verdun is the “Sacred Way.” Marked by a large monument and helmet-capped red and white markers every kilometer. The honored roadway was the only supply line existing between the major city of Bar-Le-Duc and the embattled Verdun. Without this supply line and the efforts to keep the road and supplies in operation, Verdun would have been sacrificed.

Within the city center are:

Notre Dame Cathedral, a beautiful building mostly of the 18th century which combines the Romanesque and Gothic styles. It’s interior is simple but the purples in the stained glass are superb. The Bernini-style canopy is beautiful.

The Underground Citadel, built between 1890-1893, was a big disappointment and poorly done. Surrounding the outside walls are wonderful statues of honored French but the inside is reduced to a Disneyesque wild toad ride. I managed to get an English audio of tour but the tunnel’s speakers were so loud I could hear nothing. I say skip the tour.

The Victory Monument, at the top of a monumental staircase of 73 steps, is cut into the old ramparts of Verdun and surmounted by a tall warrior. 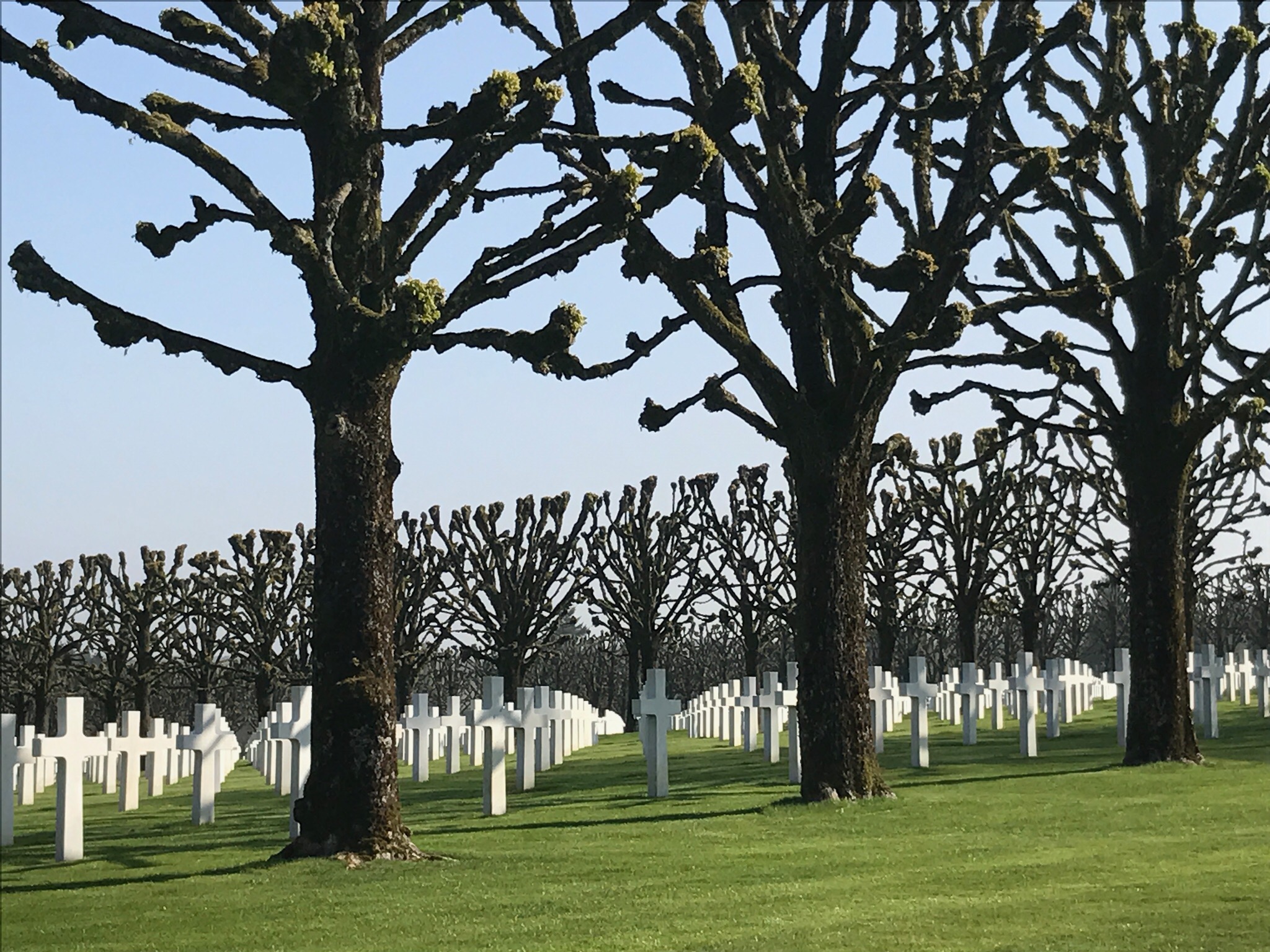 Northwest of Verdun is the Meuse-Argonne American Cemetery, the largest American cemetery in Europe. When the Americans entered the war in April of 1917, millions had already died. In September of 1918, they launched the massive Meuse-Argonne Offensive. By the end of the offensive on Armistice Day, 11 November 1918, over 1.2 million Americans had fought in the campaign, 26,277 had died. Here, in the 130 acres of the Meuse-Argonne American Cemetery, 14,246 of those soldiers are buried. Its chapel contains the names of 954 missing soldiers whose remains have never been found.

Not far from here is a German cemetery. Another cemetery is never far from where I stop. All cemeteries, and I stopped for dozens, were well maintained and posted with information about the cemetery, the nearby battles, and those military buried and missing. The American Cemeteries were especially beautiful and manicured. Within their visitor centers, I found memorabilia, letters, videos and informative maps and displays paying tribute to the fallen. Locals and guest from around the world visit and honor these men on a daily basis. For obvious reasons, I find that comforting.

Until one stands on the battlefields, in the trenches, but most especially in the cemeteries blanketing Belgium and northern France, one doesn’t come close to understanding the horror, terror, honor and sacrifice of those who served and fought here. Movies like “Saving Private Ryan” (WWII) and “War Horse” (WWI) might come close but close only matters in horseshoes. Reading a myriad of history books helps understand the logistics and strategies. But being here, standing in this broad field of white stones, reading the names, seeing the now-tranquil countryside – that gives me pause and ponder.