Any kid knows of Napoleon and Waterloo. Of a right age when Waterloo is mentioned, some may think of ABBA. Even older? How about Stonewall Jackson or Ferlin Husky? I remember all of them, but mostly I think of the extraordinary general who was Napoléon Bonaparte.

Recognized as one of the greatest military strategist of all time, Napoléon may have been small, but was a titan in military history. He studied the greats, Caesar and Alexander the Great (as did Patton), immulated and improved upon their tactics, and was set to conquer most of Europe. His enemies were in awe of his abilities and intelligence (as were Patton’s enemies). 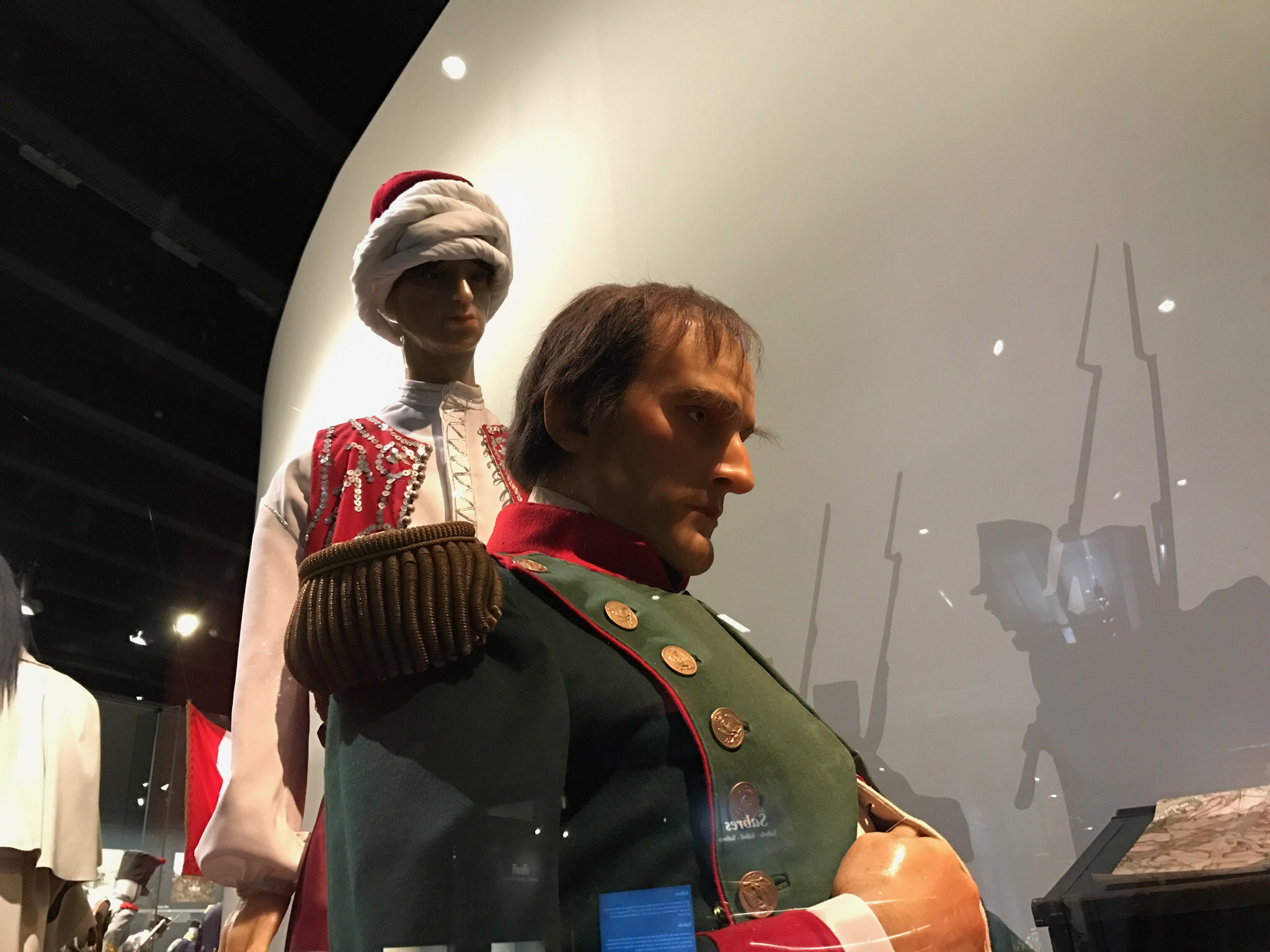 Over a span of 19 years, Napoléon fought 60 battles, losing only seven, none decisive. He often defied the odds, winning battles he should have lost. At times outnumbered, facing disadvantages and seasoned armies and generals, Napoléon exhibited brilliant strategy and fortitude. Mostly, as for all winning and decisive generals, his men, and country, loved him. The battles at Austerlitz, Jena, Ulm and Wagram were made him famous. But, unfortunately, he is remembered for his final defeat at Waterloo. So much so, the phrase “he met his Waterloo” became a part of our lexicon.

Many states recognized the imperative to stop “The Emperor’s” road to conquering all of Europe. They formed the Seventh Coalition led by Wellington, his mortal enemy. It took the combined armies of Great Britain and Prussia, plus troops from Russia and Austria with additional Dutch and Belgian troops (about 240,000) to defeat the French army of 73,000. Critically outnumbered, Napoléon knew this was the decisive battle and in spite of courageous fighting, he met his Waterloo.

Then part of the United Kingdom of the Netherlands, the town of Waterloo and site of Napoléon’s historic defeat, is only 10 miles south of Brussels. The Battlefield is another two miles south of town. It’s a must see on my historic battlefield tour.

My first stop is the Wellington Museum in Waterloo, housed in the inn that General Wellington made his headquarters during the battle. The museum describes the battle and its participants, includes drawings and artifacts, and has an excellent audio guide. A Pass 1815 will gain admission into all the related sites. Across the street is the Church of St. Joseph; its rotunda and interior is worth a stop.

Evidently, tourist began arriving in Waterloo the day after the battle in order to examine the field. One wonders, considering the mayhem and death, what that experience must have been like. Alllied forces suffered around 17,000 dead, wounded or captured. The French suffered around 25,000 dead and wounded.

At the Battlefield site is a wonderfully informative and modern museum which will explain the battle and its elements. Much memorabilia and lots of dioramas bring the event to life. The. Use us is excellent as are the videos. There is also a huge panorama detailing the direction of battle. Still, it is difficult to imagine the scale and carnage. 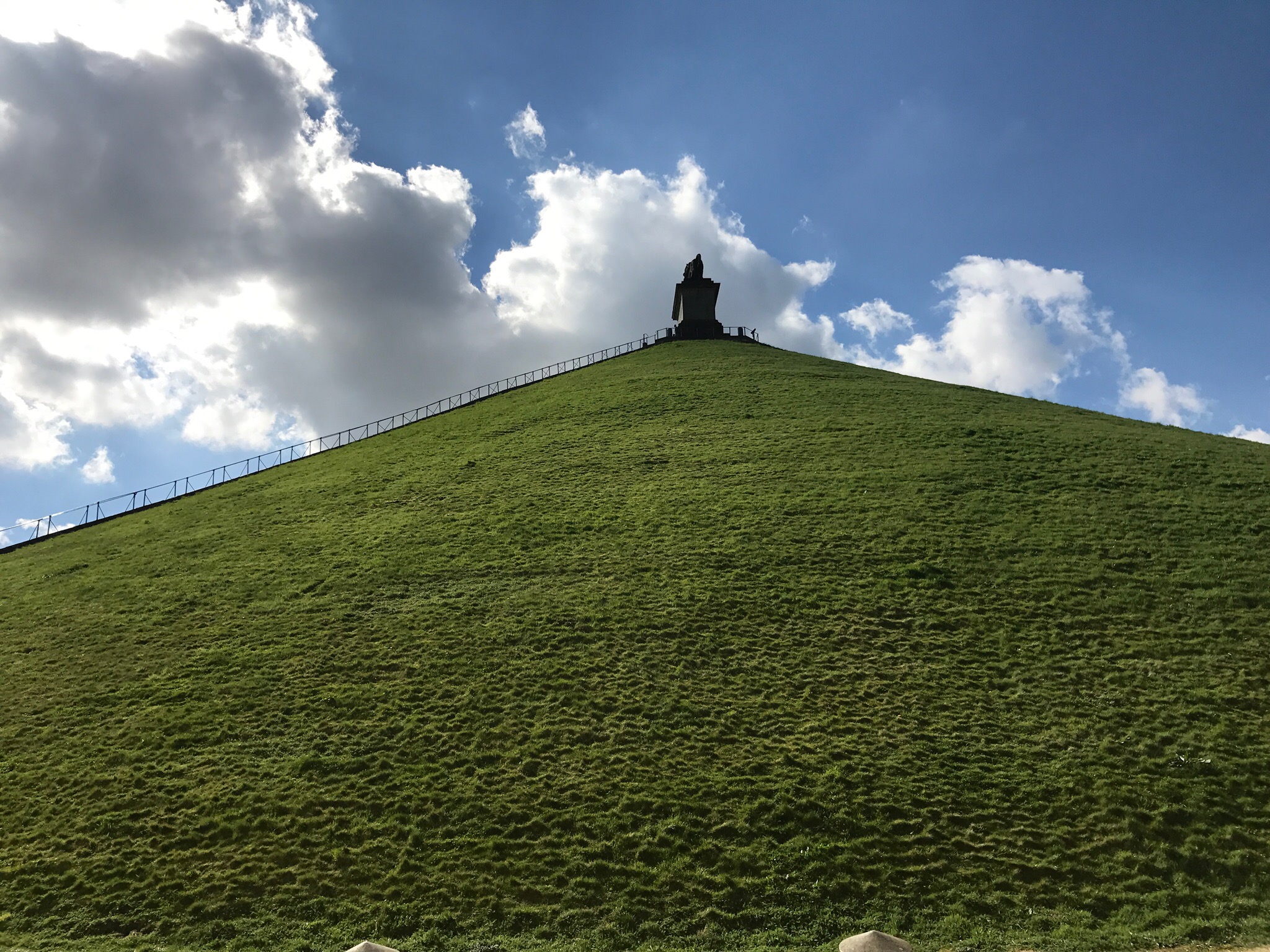 In 1820, the Netherlands’ King William I ordered the construction of a monument and the Lion’s Mound was constructed using 390,000 cubic yards of earth taken from the ridge at the center of the British line, effectively removing the southern bank of Wellington’s famously effective sunken road.

“Every one is aware that the variously inclined undulations of the plains, where the engagement between Napoleon and Wellington took place, are no longer what they were on 18 June 1815. By taking from this mournful field the wherewithal to make a monument to it, its real relief has been taken away, and history, disconcerted, no longer finds her bearings there. It has been disfigured for the sake of glorifying it. Wellington, when he beheld Waterloo once more, two years later, exclaimed, “They have altered my field of battle!” Where the great pyramid of earth, surmounted by the lion, rises to-day, there was a hillock which descended in an easy slope towards the Nivelles road, but which was almost an escarpment on the side of the highway to Genappe. The elevation of this escarpment can still be measured by the height of the two knolls of the two great sepulchres which enclose the road from Genappe to Brussels: one, the English tomb, is on the left; the other, the German tomb, is on the right. There is no French tomb. The whole of that plain is a sepulchre for France.” – Victor Hugo ”Les Misérables”. 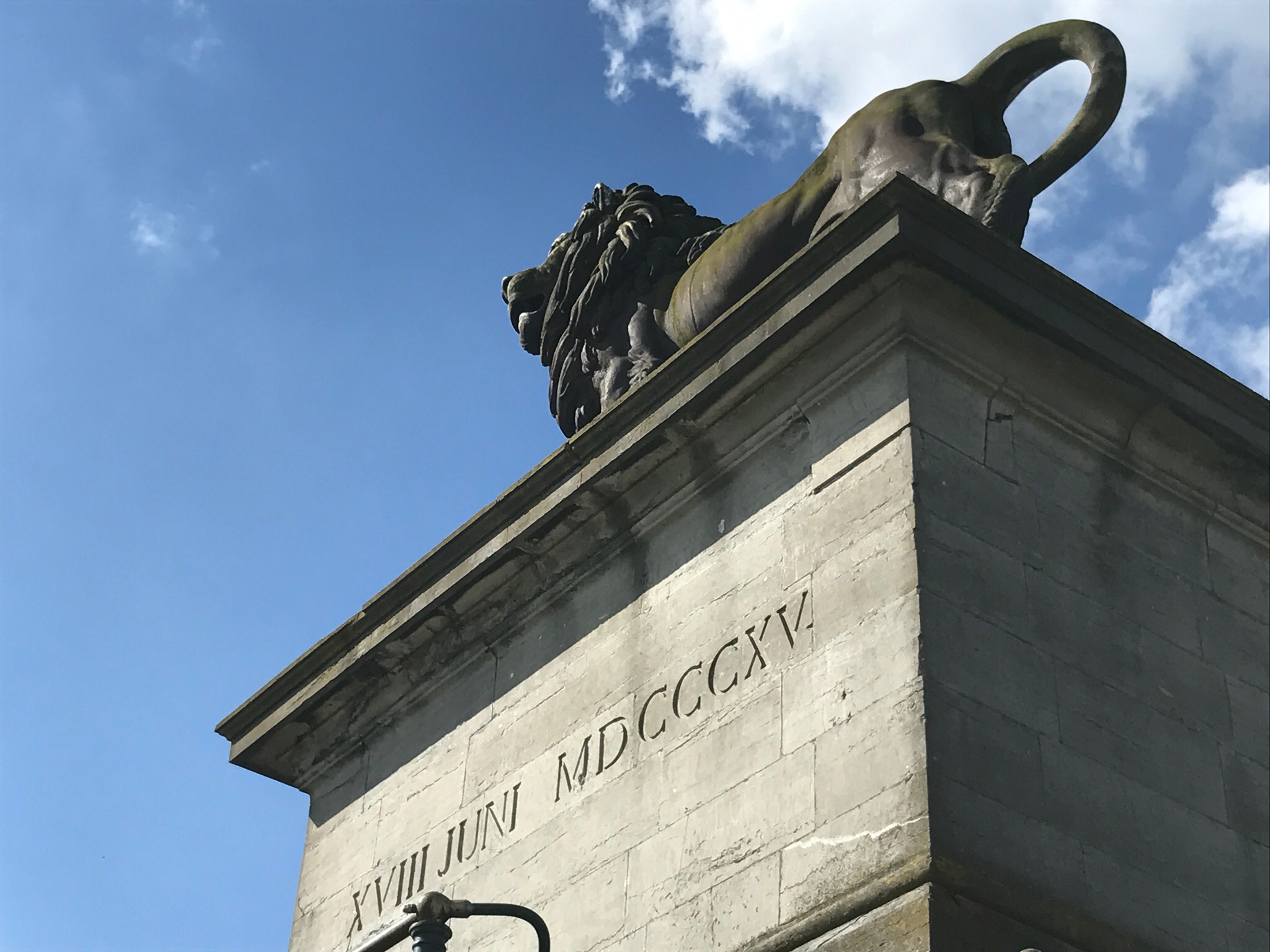 From the top of the Lion’s Mound, beneath the roaring symbol of victory and defeat, I can see numerous monuments to the grave, to the fallen. I can see for miles over the green, flat fields. All is tranquil where, in 1815, history was made when over 200 thousand men clashed and ultimately decided the fate of Europe.

It was in the old farm called Caillou where Napoléon and his staff spent the night of 17th June 1815. Five rooms display weapons, field equipment, decorations, medals, as well as dioramas retracing the history of the Imperial armies. An audio guide explains the farm and the battle. In the orchard alongside the Museum, a monument commemorates the last night watch of ‘Les Grognards’.

A wonderful bronze statue of Napoléon stands in nearby. Vive L’Empereur!