I return to Lisboa after 45 years. Will I recognize its changes? Will it have changed? How have I changed? I certainly am a different traveler from the novice who visited Lisbon on a budget. In June of 1972, I wrote:

“Woman Uses Her Head in Lisbon – It is sunny and warm as I arrive after a night on the train, the only American in the compartment. The city is beautiful from afar, but loud, crude, filthy close up. The people appear unattractive and spend most of their time spitting on the sidewalk. Two rules of travel apply here: perspective and experience will offer a different twist to things, and secondly, always give a second chance. The older women look like ‘hags’ who put their saw-toothed curses on people. They wear black dresses down to their ankles, black shawls, and carry stuff on their heads. Maybe she is spitting on the sidewalk because my western dress is too inappropriate for them? I am beginning to agree. I have sent luggage home along with those knit pants and short skirts, and am ready to ship even more. There are thousands of sailors around this major port. I never did like sailors! They do have beautiful jewelry here but prices are enormous for a person on a small budget.” 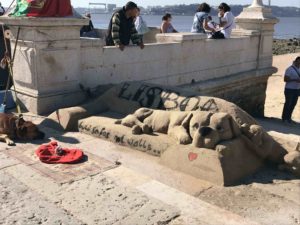 Christopher Columbus may have anchored near here on his return from ‘discovering’ the Americas, but it is Prince Henry the Navigator who proudly points my way to future adventure. I explore Lisboa armed with deeper insight. Age, experience and internet bring me closer to the real Lisboa. It remains “beautiful from afar” but not nearly so crude or filthy close up. The streets are noisy, the language is almost impossible to understand (though a little easier when printed), the hills steep, the port along the Tagus River lively but smelly, neighborhood streets are narrow, and historic plazas are pleasant. All in all, Lisboa is a great city to explore.

Our lodging, Feels Like Home, is well-located in the Rossio neighborhood. We flew into Lisboa’s airport and rode the metro to within a block of our hotel. It is a culturally diverse area with a myriad of cafes, plazas, and shops. FLH is a newly-remodeled surprise of wood, stone, art-deco and 1950-1960s funk. The Portuguese include breakfast with rooms and here the buffet was excellent. Coffee, water and cake are available in the comfortable lounge, their cabinet stereo playing an easy tune by Nat King Cole. The stairs are a killer but friendly staff may heft your bags for you. The cafes and their promise of beer or wine at the bottom of the stairs help make the climb easier.

What I call ‘central Lisboa’ is a relatively flat area of busy streets between two major climbs, both with sites worth visiting. Spurning the “hated by locals” tuk-tuks, taxis are relatively inexpensive and there is a lift up to the Carmo District. There are also yellow trams that are unbelievably crowded and probably pretty unpleasant. Looking at the t-shirts, mugs, plaques and tiles, the uninformed would swear they were in San Francisco. Armed with Google Maps, we head to our points of interest.

Lisboa Cathedral is not impressive, but I am reminded a 1755 earthquake destroyed Lisboa and was felt as far as Finland. On 1 November of that year, the city was struck by a quake above 8.5 magnitude. Destruction was followed by fires and a tsunami. The death toll is unknown but estimated between 10,000 and 100,000 people. Lisboa was almost totally destroyed. The shaking lasted from three to six minutes, causing fissures 16′ wide. Fleeing to the docks, people were met by walls of water racing up the Tagus River. Fires raged for a week. Suffering economic disaster, rebuilding would take decades.

The Cathedral sits atop its hill amid busy streets and shops. With the medieval appearance of a fortress, it appears choked by the surrounding urbanization. Two bell towers topped by defensive-type crenellations flank the entrance. Since the beginning of construction in 1147, the building has repeatedly been modified. A mix of architecture from Romanesque-Neoclassic-Rococo, this is the oldest church in the city. In fact, this was a Visigoth religious site since the 4th century, Moors from the 8th to 12th century, and, after the Reconquista in 1147, Christians built their new cathedral over the mosque.

The interior is plain and unassuming, in part because the earthquake destroyed the Gothic main chapel, cloisters and many side chapels. What the quake didn’t destroy, the ensuing fire finished. The cathedral was partially rebuilt and, in the beginning of the 20th century, was renovated to reflect the plain appearance of today. Gothic barrel vaulting is always impressive as are the gigantic columns supporting it.

The rustic, battered church around the corner from our hotel is the Igreja de São Domingos. Dedicated in 1241, at one time it was the largest church in the city and once the site of Portuguese royal weddings. It was also the former home of the Inquisition and where a Jesuit missionary was executed in 1761 for treason. It was damaged in a 1531 earthquake and almost totally destroyed the morning of the 1755 quake. In 1959, a fire killing two firefighters completely gutted the church, destroying paintings and statues. Today, walls and columns, battered and unadorned, stand proud as the home church for this vibrant neighborhood.

This square witnessed a significant event during the tragic years of the Inquisition. Following the 1492 banishment of the Jews from Castile and Aragon by the Catholic Monarchs, Isabel and Fernando, about 93,000 Jews took refuge in Portugal. King Manuel I was far more tolerant toward the Jewish community but, under pressure from Spain, made their conversion to Roman Catholicism compulsory in 1497. In 1506, during a time of drought and plague, the “New Christians” (converted Jews) became scapegoats. Over 500 were murdered.

A large stone in the square commemorates the Jewish Massacre that occurred here. It reads: “In memory of the thousands of Jews who were victims by intolerance and religious fanaticism, killed on the massacre that started on 19 April 1506, on this square.”

Towering over the eastern sector of Lisboa is Castelo de S. Jorge. It represents a climb and a 5€ taxi ride is money well spent. There has been a settlement here since the 7th century; the castle and Moorish fortifications were built in the 11th c. Following Reconquista, the royal residences were added, expanding over the centuries. One is able to walk around the citadel’s walls and fortifications, climb its towers, visit the archaeology museum, photograph the peacocks, and generally pass a couple pleasant hours wandering around. The views are spectacular.

An interesting exhibit, the “camera obscura,” uses optics and mirrors to produce a 360º view over Sevilla in real time. Shows in English are hourly and lines are long so you may have to stand around quite some time to ensure a spot.

Our time was better spent wandering and exploring the narrow, quiet streets through the Alfama neighborhood and returning to the riverside beach area of the Comércio Square with its buskers and sand artists. The water may be a little stinky, but the activity is lively.

Directly opposite the Castelo, on the western side of Lisboa, is the Carmo Convent and its medieval ruins and archaeological museum. I was not eager to climb to the Castelo and I definitely did not desire to climb up to Bairro Alta. Fortunately, there is the Santa Justa Lift that, albeit with long lines, will slowly ‘whisk’ you to the top.

Arches and ruins of Santa Maria do Carmo

It is a crystal-clear autumn day with a brilliant blue, cloudless sky. Framed against the blue are the dramatic arches and ruins of the Church of Santa Maria do Carmo. Founded in 1389, the building was known as one of the most beautiful Gothic churches in Lisboa – until the 1755 earthquake. Nearly all its religious and artistic contents were destroyed. Rebuilding halted when religious orders were abolished in Portugal in 1834. What stands today is a shell of uncovered naves and transept. It is beautiful in its simplicity.

The square in front of the church is a fine place to pause for drinks and dinner. And when you are ready to face the crowds again, you may take the lift back down or meander down using the ramps and stairs.

Tips: Free Walking Tours left from Pedro IV Square but did not seem very organized. I could not get information online about them and speaking to a guide was not helpful. Metros and trains are easy to use and convenient. Lisboa’s cobblestone walks are beautiful with black and white designs, but uneven; wear appropriate shoes and be aware.  Lisboetas love their local drink called Ginjinha and you will find tiny bars throughout the city. Fermented from sour cherries and sugar, it is like Portuguese brandy in a shot glass (with a cherry in the bottom). You have to try it once, and for me, probably once is enough.