Just 46 minutes and about 15€ southwest of Madrid by train is Sevilla. Our Hotel Doña Manuela is ideally located overlooking the northern end of the Jardin de Murillo and the Royal Alcázar. Its neighborhood of Santa Maria La Blanca offered a plethora of cafes and bars. Perfect!

Sevilla is easy to wander and difficult to get lost as the Cathedral’s marvelous 12th century La Giralda Bell Tower soars 342’ over the city. Originally built as a minaret during the Moorish era in 1198, it was later converted and heightened after the 1248 Reconquista when the mosque was redesigned into a Catholic church. 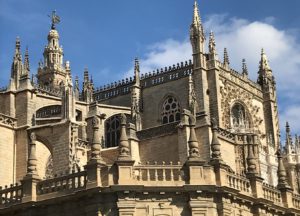 Just as the interior of the Mosque-Cathedral of Córdoba is the highlight of that city, the exterior of Sevilla’s Cathedral presents the same “AHA!” impact for the eyes with its soaring Gothic arches and spires. After its completion in the early 16th century, Sevilla’s Cathedral supplanted Hagia Sophia in Istanbul as the largest cathedral in the world, a title the Byzantine church held for nearly a thousand years. Today, it is the third-largest church and largest Gothic church. (Because the world’s largest churches are not seats of bishops, they are not true cathedrals.) The Cathedral is over 252,951 square feet in size! Walking its circumference, enjoying the facades, carved portals and towering buttresses, the cathedral impresses.

Unfortunately, the Cathedral is squeezed amid shops and cafes. Built on the site of the 1198 Almohad Mosque, the Catholic church came in and rededicated the space to Christians. After Ferdinand III’s successful conquest and expulsion of the Muslims, the mosque was expanded and adorned. Its orientation was changed and its internal spaces divided into chapels and decorated to meet Christian worship practices. Most of the eastern half of the cathedral became a royal chapel for the tombs of Ferdinand and his son Alfonso the Wise.

The cathedral was built as proof to Sevilla’s prosperity. The interior has the longest nave of any cathedral in Spain and the impressive central nave rises to a height of over 137 feet. In the main body of the cathedral, the great boxlike choir loft fills the central nave, and the enormous gold Gothic high altarpiece depicts scenes from the life of Christ. This gorgeous altarpiece was the lifetime work of a single craftsman, Pierre Dancart.

There are 80 chapels with gold adornment to satisfy the most demanding of art critics. Not only is Fernando III and his son Alfonso and other family members interred here, but, if their literature and a bronze tomb is to be believed, so is Christopher Columbus (and his son Ferdinand and brother Diego). 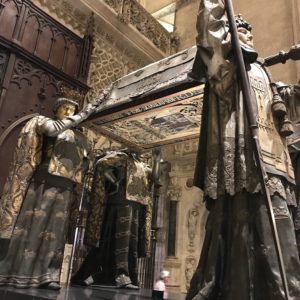 But you must believe Christopher is simultaneously buried in multiple places. Columbus traveled more after death than in life! In 1537, his bones and those of his son Diego were sent from Spain to Santo Domingo to lie in a  cathedral there. In 1795, Spain ceded all of Hispaniola, including Santo Domingo, to France and Columbus’ remains were sent to Havana. In 1898, his remains returned to Spain. Currently, the Dominican Republic claims Christopher’s bones. Spain disagrees and DNA appears to support their claim.

The builders preserved some elements from the ancient mosque. The mosque’s courtyard and fountain for ablutions, where faithful conducted ritual cleansing before entering the prayer hall, remains. It contains the fountain and orange trees. Exiting the Door of Forgiveness, which is not really a door to the cathedral but to the courtyard, this exquisite horseshoe arch is adorned with terracotta sculptures and carved reliefs.

A second sight not to miss is Plaza de España. This spectacular area was built in 1928 for the Ibero-American Exposition of 1929. Unfortunately, the exorbitant construction expense was just months before the great market crashes and economic depression of 1929, so I was told few visitors came. The grounds fell into disuse until Sevilla recognized the beautiful pavilions, botanical gardens, grand boulevards, boat canals, tile murals and Renaissance Revival/Neo-Mudéjar architecture would provide an ideal tourist attraction. If you are a real Star Wars fan, you might recognize the main buildings as the City of Theed on the Planet Naboo in “Attack of the Clones.”

In the Royal Alcazar, wander the same maze of rooms that were used by the Catholic Monarchs (Isabel and Fernando) The Spanish tiles, Moorish decorations and Mudéjar architecture are stunning. Huge gardens provide a wonderful break from the turmoil of crowds. And the subterranean royal pools are a welcome relief for hot days and large crowds. Unfortunately, I think many visitors are there because the Alcazar is also used for exterior shots in season 5 of “Game of Thrones.”

Gardens and monuments, arches and architecture will be enjoyed during a Free Walking Tour which meets every day in the Plaza Nueva. Look for the yellow umbrella. We had an excellent tour with Iator, a history major and entertaining speaker. “How many stairs in the bell tower?” Iator asks. Long way up, commanding presence, more than I want to climb? If I don’t want to climb it once, how did the mu’addhin, who recited call to prayer 5 times a day, survive? Answer? Not one o stair, just 17 ramps. Well, still a long way up.

Flamenco is a Spanish art form consisting of guitar, song and dance and Sevilla is the city to explore the flamenco scene. We visited the excellent Flamenco Dance Museum with its various displays and visuals. Asking for a recommendation from guide Iator, we attended an evening performance at the Tablao Flamenco Los Gallos. Flamenco is a very emotional style of dance. Dancers express their deepest emotions using body movements and facial expressions. They may clap their hands, snap fingers, kick their feet, or use small handheld “castanets.” The effect is dramatic, graceful, energetic and loud. 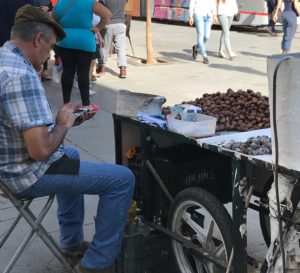 Even in warm weather, “roasted chestnuts on an open fire.”

Tips: Cathedral queues are long but afternoons, after tour groups thin, are better. The Alcazar has even longer lines but online and I booked electronic tickets the day before and this enabled us to skip the wait. Well worth a 1€ fee. The Royal Apartments are open daily to a small number of visitors so tickets must be purchase a couple days ahead. There are free entrance times in late afternoons but it will not give you time to see anything.

Our hotel was in the La Blanca neighborhood, lively with cafes and bars. It is also home to the neighborhood church, Santa Maria La Blanca. We were fortunate to be sitting at a café when the church and its membership held a processional through the streets. Upon their shoulders, unseen men carried a heavily decorated paso (float) with the Virgin Mary and Baby Jesus, drums and brass played, children held candles, priests and church members swung incense lamps and carried a plethora of silver crosses and staffs. Rose petals floated from the rooftops. The processional was not as elaborate as those during Semana Santa week, but it was a beautiful and memorable way to end our stay in Sevilla.