Bahir Dar and the Blue Nile 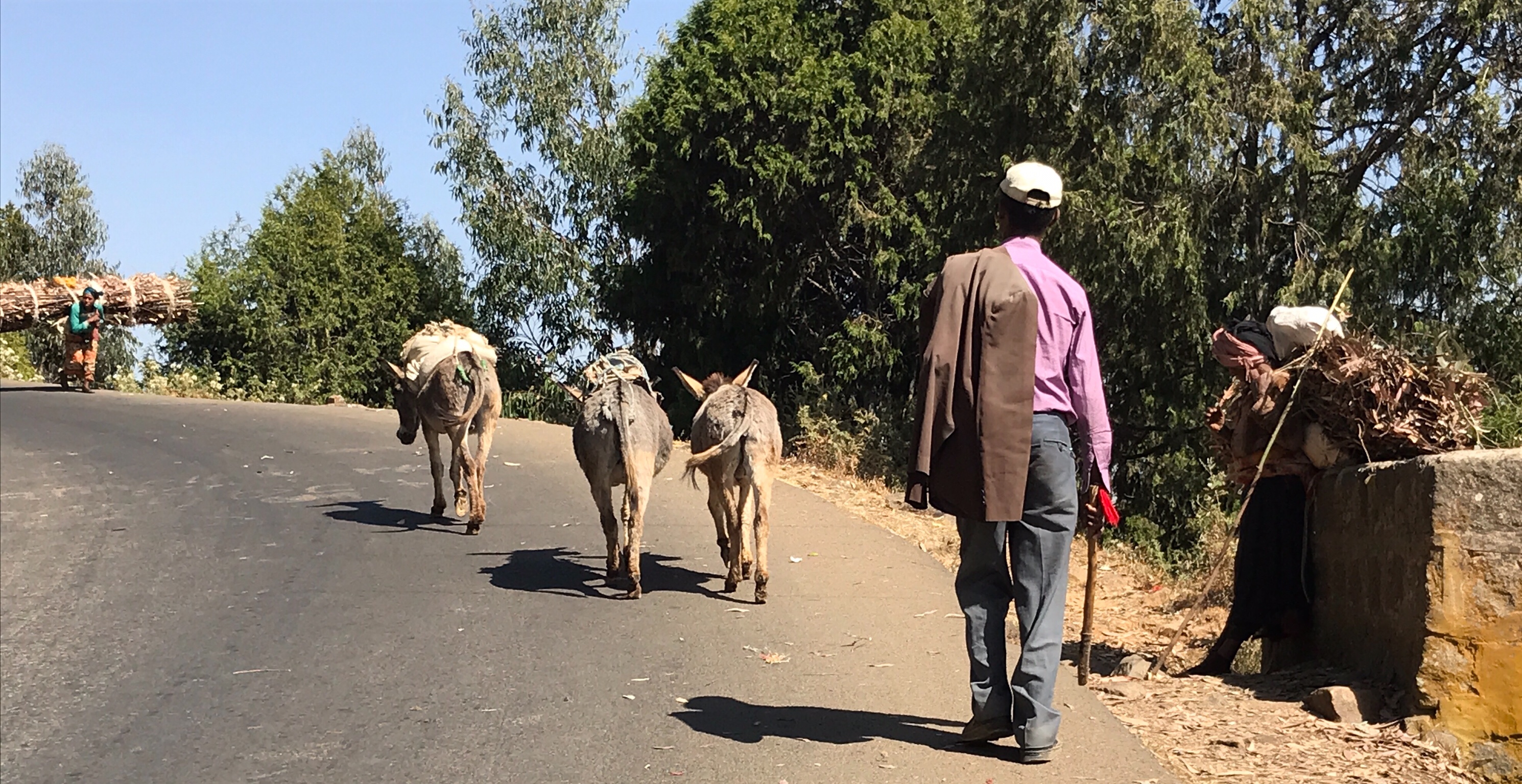 Distances in Ethiopia are deceiving. This is a land of spectacular but rugged landscape, much of which looks like the Grand Canyon on steroids. The reports say there are over 20k miles of roads. However, that doesn’t mean they are all paved, lit, dual lane, wide enough for trucks and buses to pass, nor that drivers or animals follow any rules. Cows and goats have the right of way and they just don’t care that I may be in a hurry. One travel site warned about the presence of land mines on some of the more isolated roads. Ethiopia’s roads have never been easy, something the Italians found out when they thought they could easily conquer these noble people using roads better suited for donkeys than tanks, when it took days to go a few score of miles. 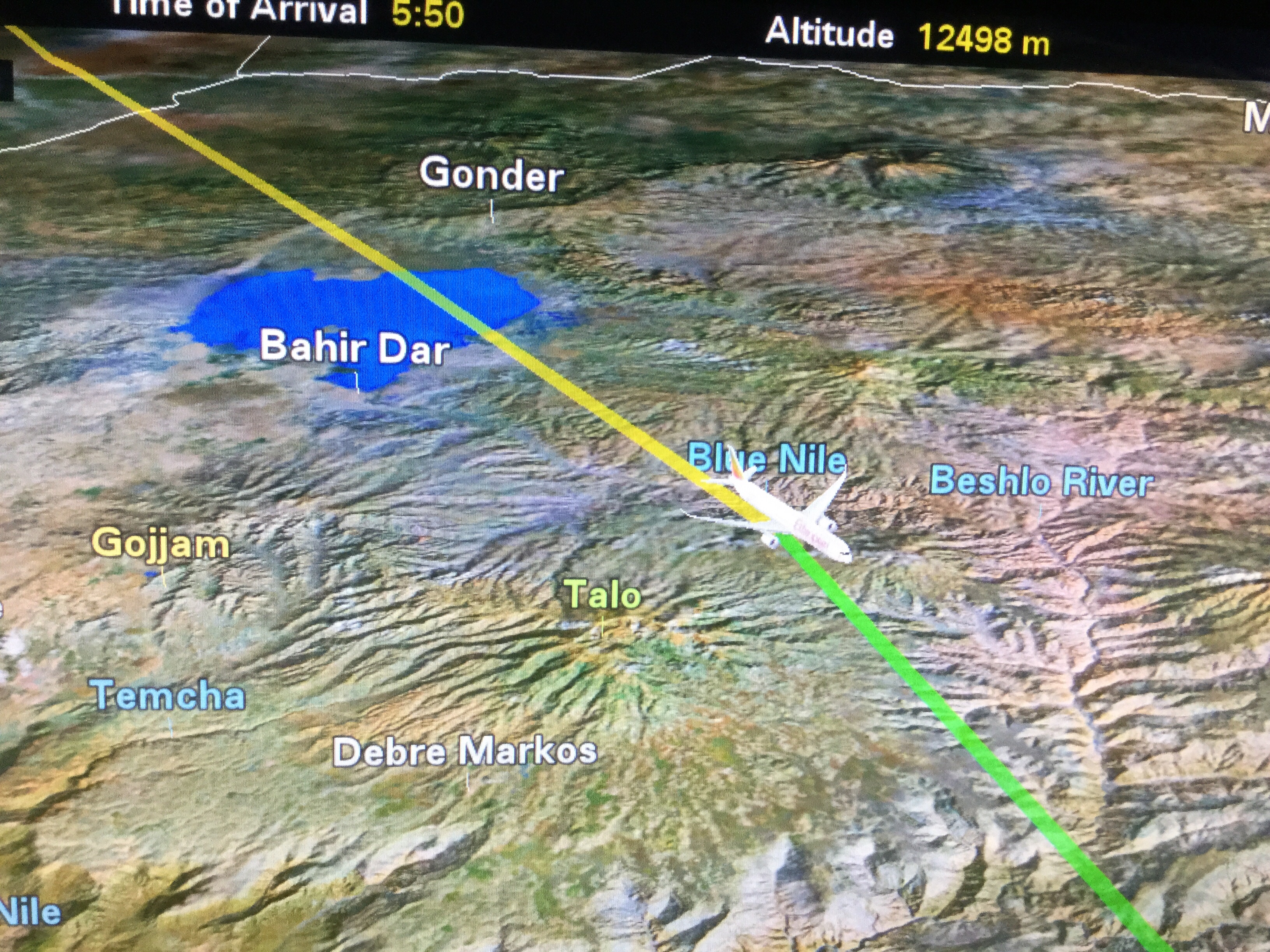 My Ethiopian flight leaves the chaos and multiple security stops of Addis airport behind. I was hoping to enter a land of clean air, but beneath me the haze is thick and brown. I can see rare patches of green, steep escarpments and deep gorges slash across the ground in all directions. This is a horizon of river gorges, some flat land and cracks in the earth radiating out like jagged strikes of lightening across a brown landscape. A straight ribbon of road seems to go forever and I wonder how cars manage in what looks to be impassable country.

From above, the landscape looks like a severely wrinkle piece of fabric. As I fly further north, I begin to see more green. To the northeast, I imagine what must be the Simien Mountains and a huge depression, its east face like a giant ripple spreading for miles and miles. Reds, pinks, beiges and greens color the landscape. And then I am over Lake Tana. I can see canoes in the water and numerous islands but not its northern shores. We land in Bahir Dar.

Bahir Dar is located along the southern shores of Lake Tana. The city looks modern with wide avenues and what I thought to be a traffic light. The traffic is horrendous. At an elevation of about 6,000 ft., Bahir Dar has almost a tropical savanna climate, with very warm afternoon temperatures and cool evenings. It is one of the fastest growing cities in Africa and was awarded the UNESCO Cities for Peace Prize for addressing the challenges of rapid urbanization. It looks to be a nice city. The airport is certainly more modern than Addis Ababa’s.

Bahir Dar’s origin dates to at least the sixteenth or seventeenth century. During the Ethiopian Civil War in 1988, the 603rd Corp of the Third Revolutionary Area headquartered here. That spirit of revolution still lives, attested to by a wonderful Martyr’s Memorial to the patriots of the civil war and the plethora of photos of Che.

Lake Tana is an inland sea and the largest lake in Ethiopia. Tana blankets 1,400 square miles and is approximately 52 miles long and 40 wide, with a maximum depth of 50 feet, depending on season and rainfall. This is the source of the Blue Nile which weaves its muddy way another 3,245 miles through Ethiopia, Sudan and Egypt to the Mediterranean. The Lake Tana region has been a UNESCO Biosphere Reserve since 2015 thus recognizing its national and international natural and cultural importance.

The lake supports a large fishing industry, mainly Nile tilapia which is endemic. Numerous wetland birds nest here, such as the great white pelican and African darter. It is also an important resting and feeding ground for many migratory waterbirds. We see the source of the Blue Nile, but alas, there are no crocodiles. 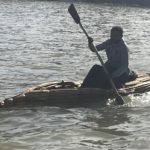 I board a small boat which motors 45 minutes northwest to the peninsula of Zeghe. Fishermen in traditional papyrus boats of the region fish for tilapia. Waters are calm and the sun is shining and I pause to reflect. This is the exotic Nile, ranking right up there with the Amazon and the Yangtze. In the 1980’s, I visited the Nile Delta in Cairo and ferried stretches of the Nile between Luxor and Aswan. In 2017, I boated the White Nile, visiting Lake Victoria (a source) and the awesome Murchison Falls in Uganda. Today, it is the Blue Nile.

Lake Tana was formed by volcanic activity about 5 million years ago and was originally much larger. Seven large rivers feed the lake, including the Little Nile River, as well as dozens of small seasonal rivers, but the Blue Nile is the only river exiting. The lake also has many islands, the number of which varies depending upon who you ask and water level. Numbers range between a high of 45 counted by locals and 37, most of which are inhabited.

Thirty islands have churches and monasteries of historical and cultural interest. Remains of ancient Ethiopian emperors and treasures of the Ethiopian Church are kept in the isolated island monasteries. It is said that the Ark of the Covenant was hidden by monks for 400 years on the small island of Tana Qirqos near the eastern shore. The Virgin Mary was supposed to have also stopped there to rest on her journey back from Egypt. The monastery still stands but the Ark was moved to Askum. And Emperor Frumentius, who introduced Christianity to Ethiopia, is buried on Tana Cherqos. 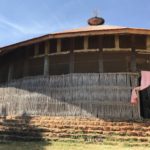 The boat trip and a short walk takes me to the historic monastery of Ura Kidanemihiret. Dating from the 14th century, the monastery has an important collection of religious icons and paintings from the 16th to 18th centuries. The church is circular and made of wood and wattle topped with a straw roof. As is customary with Ethiopian Orthodox, there are three divisions of the church: the outer ring is for the people to worship, the second ring is for communion, and the center of the church, closed to all but the priest, is the holy of holys. Here, the Talbot (a replica of the original arc) is kept and removed only on special occasions. 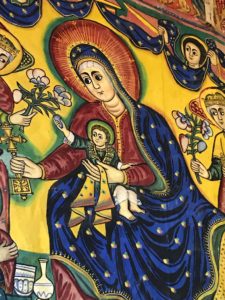 The entire wall of the first circle is covered with bright paintings depicting stories of the Bible. The walls were originally covered with a burlap material, plastered with a paste, then decorated. From floor to ceiling, every inch is covered with magnificent depictions of biblical scenes according to Ethiopian Orthodoxy. The effect is stunning. The original wood doors have what seems to be much older primitive sketches.

One reason to visit Bahir Dar is its proximity to the Blue Nile Falls, called Tissisat or “smoking water.” Located just 18 miles south, Blue Nile Falls is one of the great waterfalls of the world.

We are ferried across the river and follow a footpath through working but fallow fields, village huts and grazing livestock. The government owns all the land and the people lease it. It is the dry season and, except for onions, I see little planted. There are several women selling everything from linens to the yarn that makes the linen, little appears hand made by the villagers. Then we have a choice to walk across a suspension bridge spanning about 100’ of a very deep chasm or continue the easy route. I watch as villagers and hardy hikers cross the bridge along with donkeys heading home. Some donkeys refuse to step onto the bridge and, considering the hill to climb on the other side, I do the same. I take the easy way. After an easy 15 minutes, we are gifted with a nice view of the Blue Nile Falls.

The before (left) and after (below) of the falls is dramatic. The falls consisted of four streams that originally varied from a dry season trickle to falls over 1312 ft. wide during the rainy season – a thundering cataract of foaming water. Not likely these days because the water is regulated by a hydroelectric dam. However, the falls can reach over 300 ft. wide with water plunging 148 ft. depending on the season and dam diversion. That can produce some good roars and mists and rainbows. 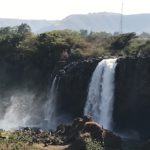 This is the dry season but the falls throw up a continuous spray of water, which can drench those who clamor down the cliff side for closer looks. It is sunny but no rainbows, people just get wet. A small perennial rainforest of lush green vegetation is supported by the falls, inhabited by monkeys and colorful birds none of which I see.

There are always concerns and proprietary claims on the Nile as it wends it’s way for a total of 4,258 miles. Lake Tana’s water level has been regulated since the construction of a dam and hydropower station where the lake discharges into the Blue Nile. Unfortunately, this also controls the flow to the Blue Nile Falls. It further effects the farming and livelihood of every soul who lives along and depends upon this water not just here but along every mile between where I stand and the Nile’s exit at Alexandria Egypt over 3,000 miles north. Every dam changes its course and volume creating immense issues for millions of people over thousands of miles and numerous countries.

The Nile is claimed as the longest river in the world. Flowing out of Kenya, through Uganda and over the magnificent Murchison Falls as the White Nile, through Ethiopia across Sudan and into Egypt as the Blue Nile, it exits into the Nile Delta flowing into the Mediterranean. It’s drainage basin effects eleven countries, namely, Tanzania, Uganda, Rwanda, Burundi, the Democratic Republic of the Congo, Kenya, Ethiopia, Eritrea, South Sudan, Sudan and Egypt.

Current geographers say the Amazon is longer. I give it to the Nile.