The Omo Valley – Meeting the Konso

I was forewarned!  “Omo Valley Adventure – In order to fully experience and explore this incredibly diverse, yet sometimes isolated UNESCO area, we really get “off-the-beaten-track”. Sometimes the road is in rough condition, you should be prepared for some bumpy drives. Accommodation in small towns is modest. A certain spirit of adventure is required for this journey and any travel hardship will certainly be made up for in experience!”

Ethiopia’s Omo Valley is probably one of the most unique places on earth because of its geological history and the tribes and animals that live here. Located in East Africa’s Rift Valley (EAR), this isolated region is recognized for its culture and diversity. That is why I have come.

The tribes and villages that we will visit while in the lower Omo Valley include the Konso, Mursi, Hamer, Karo and Banna tribes. Each tribe provides a look into the individual cultures and lives of their people. It is like taking a huge leap back in geological and evolutionary time. DNA studies connect our African roots to these lands.

National Geographic’s Deep Ancestry traces the ancient migration of man. The direct paternal ancestor of all men alive today was born in Africa between 300,000 and 150,000 years ago (long after 3.2 million-year-old Lucy). Dubbed “Y-chromosome Adam,” he was neither the first human male nor the only man alive in his time. (He also probably lived during a different time as “Eve,” our first trace of genetic woman.)

Adam was the only male whose Y-chromosome lineage is still around today.

About 80,000 years ago, the common ancestor of men alive today was born. Some of this man’s descendants began their journey out of Africa to the Middle East and India. Some small groups would eventually reach the Americas, other groups would settle in Europe, and some would remain near their ancestral homeland in Africa.

Skull of early man found in the Rift Valley

Branch M168 Man gave rise to the first genetic marker in my family lineage and lived in the Rift Valley some 70,000 years ago, perhaps in Omo Valley where I explore today. When did my ancient ancestor exit Africa? About 50,000 years ago, my ancestor migrated north, leaving Ethiopia. Climate was changing and the Sahara was becoming an inhospitable desert. This man belonged to a group that traveled north along the Nile to settle Africa. Later, his descendants took part in a second expansion and left Africa. A small group of these people, my ancestors, chose to follow the coast of the Mediterranean Sea around the Levant and north into Anatolia.

The muddy Omo River runs for 472 miles through the Rift Valley and empties about 150 miles further south into Lake Turkana. The Omo is the life and livelihood for the tribes and animals in this region. Without its water, neither would survive. The effects of building the Gibe Hydroelectric dam on the Omo are unknown.

This entire region has been designated a UNESCO World Heritage site.

The Lower Valley of the Omo is very isolated but not that large, extending over an area of about 64 sq. miles. Sedimentary deposits are disclosing some amazing discoveries of hominid fossils that are telling the story of human evolution. These significant discoveries shed light on the earliest stages of the origins and development of Homo Sapiens of Africa. But its future is vulnerable not just to the changes to natural flood cycles wrought by the building of dams, but to the work of petroleum companies and foreign development of plantations.

The presence of growing numbers of tourists into these villages cannot help but change the tribes. I want to experience this unique and fascinating region but I do not want to be party to its change. How will the dam, land grabs and tourists change the people of the Lower Omo River? The tribes have lived in this area for centuries and have developed ways to survive in a challenging environment. But will they survive our iPhones?

My first experience with this dichotomous situation is our visit to the walled Konso village of Gamole. Gamole is recognized as a UNESCO site because of its use of stone walls and terraced farming. For over 600 years, the Konso have terraced the surrounding hills for growing a crops such as sorghum, maze, corn, barley, mangos and their staple food, moringa. Moringa leaves are used like spinach or cabbage; it is also medicinal. In fact, moringa is so important, abundant ownership is a status symbol when one marries.

Entire hillsides, for miles, are terraced by the local Konso tribe. Found on high plains and hilly summits, Konso settlements are encircled by consecutive circles of defensive dry-stone walls, sometimes as many as six. As the community grows, so grows the stone walls. If the Konso have one thing in abundance, it is rock. The Konso have adapted to the hilly, arid environment of this remote and hostile region. They are excellent farmers. Terraced fields not only collect water and retain precious soil, but the walled towns protect their inhabitants. And the resulting narrow stone pathways are an architecturally attractive maze.

Men and board game at the mora

Within these walls are large straw-roofed buildings called moras, filling an important role in the life of the village. Gamole, a village of 5,000 Konso, has 10 moras. Here, young men between 12 and marriage will complete their “community service.” They will sleep here each night, help the community when needed, guard the community, and build a bond of commitment and friendship among themselves. Any social problems among the young men, the Chief will meet here to assist in its resolution. Also, husbands, after a wife gives birth, must live here for a period of time.

Konso also build ‘generational marking posts’ called daga-hela, erected through a ritual process, and used to mark each successive generation of 18 years. Some use stone stela, making the Konso one of the last megalithic peoples (prehistoric cultures who erected giant stone monuments). This community post was a tall tree trunk with each generation marked by the addition of another post. The post commemorates the transfer of responsibility from the older generation to the younger. 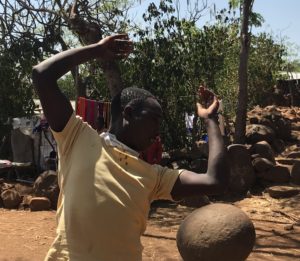 Hefting the rock over his shoulder

The village possesses a “maturity stone” weighing about 100 pounds. To prove their manhood and suitability for marriage, the man must heft the stone up and toss it over his shoulders. There is no marrying in the same clan and to do so means ostracism. A son may have an arranged marriage but can also marry for love. There is polygamy but each wife gets her own home. Also, if a brother dies, the wife will be married by another brother, thus keeping the livestock and land within the family. While the girls leave to live with their husbands, the boys stay within the family compound.

Surrounding forests are used as burial places for leaders and respected heroes. The Konso is a pagan/Animist society, though some convert to Christianity. Totem poles called “waka” are carved from hard wood, sometimes in the likeness of the deceased, and erected as grave markers. But the most unique practice is the sacredness of the “nine.”

When the tribal chief dies, he is mummified much like the Egyptians of thousands of years ago. Then for 9 years, 9 months, 9 weeks and 9 days, the chief remains in his hut. The entire village pretends he is just sick and unable to do his duties, though in reality they know he is dead. The community council and his son, who will become the next chief, carry out the king’s duties. When the required time passes, the king is buried with all honors and a huge feast is held. Thousands come to pay their respects and to celebrate. Why the love of nines? Because there a nine Konso clans.

Beautiful use of rock and wood

Our walk through the Konso village is along narrow rocky paths lined with 5-6′ stacked stone walls. The paths weave their way from compound to compound, winding its way up the hill. Each family compound consists of a protective stone wall with entry gained under a small portal of tree trunks and branches. Though the door looks haphazardly made, it is quite decorative. Inside the compound are the stables, a cooking hut, family sleeping hut and numerous storage huts. Huts are clay and bamboo with enormous grass roofs topped with a large clay pot. Everything about the hut is easily repaired or rebuilt with the abundance of materials in the nearby forests. 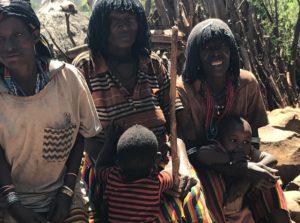 The children are said to go to school. Here, we are told 60% attend part of a day. Not at this time though as many children of all ages hang around us, in our faces, asking for “pen” and “money” with hand held out. With sharp eyes they examine pockets as if expecting to see the bulge of a money roll. Much touching, pulling of sleeves, and some petting of my head makes this a less than attractive visit. These children seem very poor and relatively dirty little fly attractors. The mothers I see are none better; most times they are burdened with heavy loads of wood, water, or fodder. Don’t know where the men are and what they do. Oh yea, they are back at the mora playing a board game.

Cutting and storing the maze

The Konso show a long cultural tradition of respect for their natural environment and very strong social and cultural practices to honor the community. This life and tradition needs to be protected but also improved. I am told there is thought given to “visitor management” strategies by the community. I hope this comes sooner rather than too late.

There are unknown numbers of nomads living around the Omo Valley but I see no evidence of them as we take the day to drive through rolling hills of dark red clay, broad savannah, and innumerable fields of crops. Many fields are being plowed by the traditional rig of two cattle roped to a wooden plowshare. The road is paved, potholed, intermittent dirt, and crowded with cows and goats being herded to water or market. Many times the roadside is a better way than the road itself. Google Maps doesn’t have a clue how to get me to my destination, even on foot. It it were not for the Blue Bubble, I wouldn’t know where I was either. And I certainly don’t know how we will get to our camp tonight. Thank heavens for 4X4s, 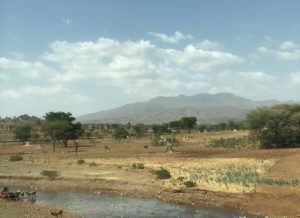 The landscape is beautiful as we traverse the Rift’s valleys and hills. Fields are fertile and await the rains in April. I see lots of bamboo beehives hanging in the trees. For some towns, it is market day and everyone for miles descends upon the square with produce, clothes, cattle and goods to sell or buy. There are the endless herds of cows, goats and sheep.

But probably some of the best shows are in the roads themselves. Everyone has a “shtick.” There are the gymnasts doing hand stands and splits on the gravel. Salesmen with necklaces, carved toys, and wholesale pottery standing by the roadside with arms outstretched, surprised when our vehicle doesn’t skid to a stop for some shopping. As we progress southeast, the salesmen and women become more demanding. Children are persistent with trinkets you should not be able to resist. There are a few fingers extended, and not in friendship.

It has been a long day over rough roads. We have found our tented camp at Jinka. It is a simple platform tent in the bush. Quiet and remote, the birds can be heard singing in the trees. We are warned, it is another Ethiopian saint’s day and the two area churches are celebrating with early masses.

Then our host distributes our ear plugs!