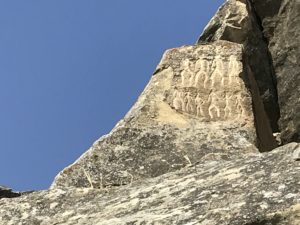 The Absheron Peninsula has long been a coveted location. Jutting into the Caspian Sea, one flies into Heydar International over the largest inland sea on Earth. Its shores were home to not only early civilization, but the long dead organisms, fossils and marine life that produced immense deposits of fossil fuel. Azerbaijan: petroglyphs, Starbucks, Tiffany’s, beaches and crude oil – all in one spot.

My friend Kathy and I have joined an Eldertrek tour to usher us about the Caucasus. Our first stop will be Gobustan National Park (UNESCO), just 38 miles southwest of Baku along the spectacular Caspian Sea. It is an interesting drive past countless oil wells, arid expanses of land, tall apartments built atop old oil pumping sites, and over an impressive highway system.

Stone and Iron Age petroglyphs have been discovered in the region’s hill caves along with mud volcanoes and gas-stones. This reserve has over 600,000 rock paintings depicting prehistoric life in the forms of primitive men and animals, battles, dances, bullfights, boats with armed oarsmen, warriors with lances, camel caravans, and images of the sun and stars. On average, the petroglyphs date back 5,000-20,000 years.

Our first stop is the well-designed and electronically modern Rock Art Museum in Gobustan. The explanations of the rock art and signs of early man assist one to recognize carvings along the trail. Once outside, in blazing sun and heat, the trail takes us up a path and around rock shelters. Along the way are several well preserved petroglyphs.

Thor Heyerdahl, the Norwegian anthropologist and captain of the Kon-Tiki, was convinced this region was the origin of the Norse royal dynasties and pre-Christian Norse gods, particularly Odin. (His theory was not viewed with favor by Norway’s academics of the time.) Nothing of this sort has been proven but the possibility of such links in a global world is interesting.

The Mud Volcanoes are equally as interesting. It is estimated that almost half of Earth’s 700 mud volcanoes are in this area, 200 of which are within a range of few thousand square miles. (Yellowstone has 3.) These volcanoes are not just bubbling pits like I have seen in Iceland or Yellowstone. There are towering cones in the distance.

A mud volcano is created by any geo-excreted gases and liquids. This type of volcano is usually found in areas where two tectonic plates collide. Most of the gases that are released are methane along with much smaller quantities of nitrogen and carbon dioxide. Generally the ejections from these volcanoes will be fine solids which are suspended in liquids that can include acidic water. Some people seek the mud, thought to have medicinal benefits.

They can also be unhealthy. Along with unpleasant gasses, temperatures can reach scalding levels and in one instance in 2001, one mud volcano 10 miles outside Baku suddenly started spewing flames 50 feet high. Perhaps, given the gasses, flames and scalding mud, it is good we saw no active volcanoes. 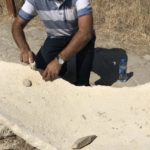 The Gaval Dash (Qavaldaş) is a 6’ flat stone that melodically resonates when hit with smaller stones. This and other rocks in the area are thought to be caused as a result of climate and the effects of natural gas creating a hollow rock.

We drive east into the midst of the Absheron Peninsula. The Peninsula itself extends some 37 miles into the Caspian and at its widest is only 19 miles. It is an undulating region with “beaches” to the east and towards the south the long, skinny spit of sand known as Absheron National Park. The entire area looks similar to the golden dry California foothills and Kern County oil fields, minus perhaps the rattlesnakes and tarantulas.

This area was the site of the some of the world’s first petroleum production in the 19th century. It shows the ravages of its oil-rich history to this day in the many rusting oil derricks that dot the landscape. Wars were fought for this region.

Escaping the environmental pollution of beaches closer to Baku, Azeris drive north to enjoy wind-swept, cleaner sand. Over 300 miles of coastline lies along the western Caspian where the beaches are nicer. Within Baku one can see the film of oil lying atop the water along the shore. (It is also one of the few modern capital cities I have ever visited where I am cautioned not to drink the water.)

Several ancient oil wells are located on the Peninsula’s oil-gas basin. The smell and promise of riches is what brought the wealthy here. One of the peninsula’s best known residents was Robert Hjalmar Nobel, brother of Alfred Nobel. He bought an early interest in Baku’s oil refinery in 1876 and reaped the benefits. Nobel’s home is open and we were able to tour his mansion and witness what oil exploitation could buy in the early days.

A second illustrious citizen was Zeynalabdin Taghiyev, one of the richest men in the Russian Empire in the 19th-20th centuries. He was well known for his philanthropic work and supported the Azerbaijan opera and ballet. His name and works pop up often in our tour of Baku. 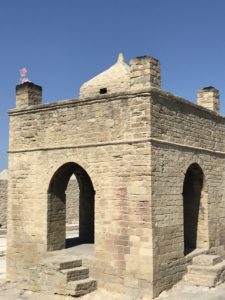 Ateshgah or the Fire Temple

We visit Ateshgah or the Fire Temple (UNESCO). The Ateshgah is a castle-like religious fire temple built on the site of a natural gas vent. One would think contractors would avoid building on active, oozing gas and fires but here it works. The Ateshgah flame is a seepage of natural gas through porous strata.

The temple was used as a Hindu, Sikh, and Zoroastrian place of worship as early as the 17th century. (Zoroastrians were descendants of the ancient Persians.) Many Indian pilgrimages were made to this site, known as Odlar Yurdu or “land of fires” though it is not a Hindu religious temple. (Zoroastrians are monotheistic while Hindus are multi theistic.) In Persian, Ateshgah referred to a “land of holes” or “hole with the fountain.” In fact, as early as the 7th century, there were literary mentions of a “Place with seven worshiped holes” believed to refer to Ateshgah.

Ateshgah is a pentagram of low walls and a large courtyard, surrounded with cells for pilgrims and monks devoted to the cult of fire. Each of these tiny cells had a small jet of sulfurous fire issuing from a funnel “constructed in the shape of a Hindu altar.” The fire was used for worship, cooking and warmth, and could be extinguished.

Fire is sacred to the Indo-Iranian branches of Sikhs, Hindus, and Zoroastrians. An altar was in the center of the courtyard and at one time a natural “eternal flame” glowed red but it burned out in 1969. The fire was fed by a vent from a subterranean natural gas field located beneath the complex, but Soviet exploitation of the natural gas reserves in the area resulted in the flame going out. The current flame is fed by a gas pipeline fed from nearby Baku. The temple ceased to be a place of worship and philosophical center for Zoroastrians after 1883.

There is some disagreement if Atashgah was originally a Hindu, Sikh or Zoroastrian structure, as drawings, symbols, and carvings support each group. A trident atop the structure is usually a distinctly Hindu sacred symbol. Most scholars identify the trident as a Zoroastrian symbol of “good thoughts, good words and good deeds.”

Some researchers believe there are structural features indicating a Hindu place of worship, like the cells and ossuary pit. But most scholars support that this was a Zoroastrian temple. One visitor in 1683 wrote that among the men who worshiped fire, there were descendants of Persians who migrated to India. One Indian magazine printed in 1898 published the article “The ancient Zoroastrian temple in Baku.” The writer called Ateshgah a “Parsi temple,” and noted the last Zoroastrian priest was sent there in about 1860.

Regardless, the structure and its Sanskrit and Punjabi inscriptions (dates on the inscriptions range from 1725 to 1873 on the Hindu calendar, which corresponds to the period from 1668 CE to 1816 CE) are an interesting and unique construction found in the middle of mud volcanoes, gas fumes and flames. 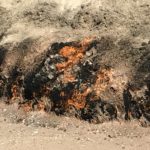 This entire region is known for being a place “where oil oozes naturally from the ground and flames burn perpetually.” We visit the well-known site of Yanar Dag to witness this phenomenon. Fed by natural hydrocarbon fumes seeping from the rock, I look into the belly of environmental Hell.

Yanar Dag, “burning mountain,” is one of the few remaining natural gas flares on the Peninsula. The natural gas fire blazes continuously on a hillside and clearly supports Azervaijan’s moniker of “the Land of Fire.” Flames can rip into the air some 10-30 feet through a thin but porous layer of sandstone, though I witnessed much more modest flames. Unlike the more unpredictable mud volcanoes, Yanar Dag burns steadily from a regular seepage of gas from the subsurface. No mud or liquid seeps from the Yanar Dag like it does with the mud volcanoes.

Even though we joked that a man must come each morning with a Bic firestarter, the  Yanar Dag flames are never extinguished. Even the surface of streams near Yanar Dag fire can be ignited with a match. Legend has it that natural flames burned in this area since antiquity and were reported by writers and adventurers like Marco Polo. I am sure any observer would not go home and forget to mention the hot flames of Yanar Dag.

It is claimed that here at Yanar Dag the flame began accidentally when a shepherd lit a match in the 1950s. Had to be the worst case of needing a cigarette ever.