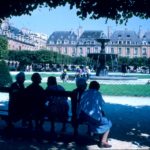 I revisited my travel article “Marais Embodies Paris At Its Best” published by The Boston Herald in 1990. I loved this area then and I still love it. From the article I borrow:

“If culture equals the sum of a city’s social behavior and artistic expression, then Paris has it in bucketfuls. Exploring Paris is like examining your first formidable city tourist map. Everything is spread before you, pleading to be seen and savored.

One quarter beckoning visitors to stroll its streets and enjoy their richness is Le Marais. Escape into a time warp, uninterrupted by modern glass and steel ‑ a quarter dominated by Place des Vosges. 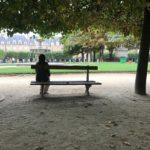 Le Marais (named for marshland once covering the area) is the second‑oldest inhabited quarter of Paris. It is now a mix of small homes and historic Hôtels along zigzagging streets, a workingman’s quarter with a large Jewish population. Early residents were Henry II and his wife Catherine de Medici, the most prolific monarch-producing dynasty in history.

In 1605 Henry IV ordered the development of this deserted district into an elegant Place Royale. A second, even more unique decision made by the King? The houses around the square were to be similar in appearance. Recognizing good real estate, his courtiers rushed to build mansions nearby.

Imagine strolling the royal square after its completion in 1612. Overhead are white stone and red brick arcades with overhanging second‑floor galleries. The steep roof is slate. Young chestnut trees promise future shade. Its open quad is ideal as a meeting place of Paris society and site for inaugural parades and countless duels.”

Little has changed. Restored facades on Place des Vosges are muted oranges and yellows, but the Renaissance spirit of Henry IV’s pet project shines through. The square has had its share of distinguished tenants, among them the cunning Cardinal Richelieu at No. 21, Madame de Sévigné at No. 1, Corneille, Descartes, Pascal, Moliere and Victor Hugo.

Maison de Victor Hugo at No. 6 is a chronological walk through Hugo’s life, displaying collections of illustrations for Hugo’s novels, including The Hunchback of Notre Dame and Les Misérables; drawings by Hugo (450 landscapes, castles, portraits); and costumes, pictures and manuscripts from his plays. The Chinese dining room and furniture was designed by Hugo. His writing desk and death mask are in his bedroom. 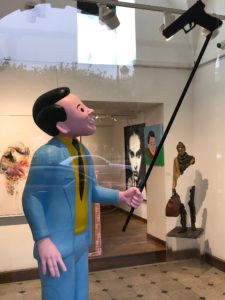 Beneath vaulted arcades are shops, restaurants and art galleries. Along the quarter’s streets are numerous cafes and restaurants. The square is now a kiddie’s park where young and old alike gather under the rustic calm of graceful chestnut trees. Cardinal Richelieu had the  equestrian bronze of Louis XIII erected.

On the northern edge of the neighborhood is its historical market, named after an orphanage that occupied the site in the 1500s (closed before the revolution). Marché des Enfants Rouges, ‘rouge’ or red was the color of the children’s clothes donated by Christian charities, now houses a popular open food court. With so many wonderful sidewalk cafes, the market probably isn’t worth the extra blocks of walking.

Blue is typically not my color, unless it deals with paintings. The Impressionists seemed to get it right.

Musée de l’Orangerie – For me, this museum is mainly about Claude Monet. Favorite artists on the walls including Renoir, Rousseau and Cézanne as well as Picasso, Soutine and Matisse. l’Orangerie is not of the stature of its sister museum d’Orsay, but its paintings are well worth a visit. And it’s oval rooms were built to contain Claude Monet’s gigantic “Les Nymphéas” painted in his gardens of Giverny.

On the day following the Armistice in 1918, Claude Monet gave the French state his own symbol of peace: a panoramic painting of over 330 lineal feet. Monet had started this project three decades earlier with the intent to create a landscape of blue water dotted with water lilies, willow branches, and cloud reflections. His eight panels, covering over 2000 square feet, envelops one in a seal of blue and calm.

In the 1970’s, I visited the Jeu de Paume in the Tuileries Gardens. I fell in love with the priceless display of impressionist (the museum represented in the book and film “The Monuments Men” and considered as the most famous museum of Impressionist painting in the world). Many of these works have since been moved to today’s pièce de résistance of Impressionism, the Musee d’Orsay. 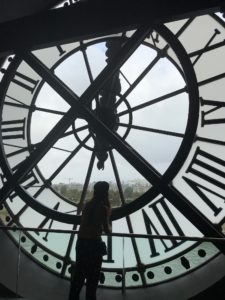 I stand in awe of the building itself. Not long ago, in Parisian time, it was doomed for destruction. In the center of Paris along the Seine, the building acted as the Orsay Railway Station built in 1900. Its unique and soaring architecture make it one of the finest museums in Paris. Today, it houses art collections from the period of 1848-1914.

The galleries display the artists from Impressionism to pointillism. Included are superstars  Edouard Manet, Claude Monet, Degas, Renoir, Van Gogh, Cézanne, Gauguin, Seurat and Rousseau. The museum is a plethora of art and architecture. And if possible, take in the view over Paris from the 5th floor clock.

Another entry from my 1972 diary, continues to hold true:

“Driving and walking in Paris is a challenge. Both participants want the right of way and each awaits who will back down first. It is a game: the walker gets +10 points to cross the street. a) If you look for traffic it is –1 for each direction, b) if you look scared it is –5, c) if walker hurries the car gets +10, d) if the driver slows +5 for walker, and e) if the car stops the walker gets +10. So far I am about even with the drivers.”

So much is different, yet so much remains the same. There are more dedicated crosswalks and actual green and red light “suggestions” for drivers. I would just up the pedestrian points to adjust for 46 years of inflation.